The Basilica di Santa Maria Maggiore (Basilica of Saint Mary Major) is the largest Catholic Marian church in Rome and it is because of its size that it receives the title “major”.  The earliest building on the site was the Liberian Basilica or Santa Maria Liberiana, after Pope Liberius (352–366). This name may have originated from the legend which recounts that Pope Liberius was told in a dream of the forthcoming snowfall in August.  He went in procession to where the snow did fall and there marked out the area on which the church was to be built.  Hence, the Basilica is sometimes referred to as Our Lady of the Snows.  The basilica has also been called Saint Mary of the Crib (Sancta Maria ad Praesepe), a name it was given because of its relic of the crib or manger of the Nativity of Jesus Christ, four boards of sycamore wood believed to have been brought to the church, in the time of Pope Theodore I (640–649). 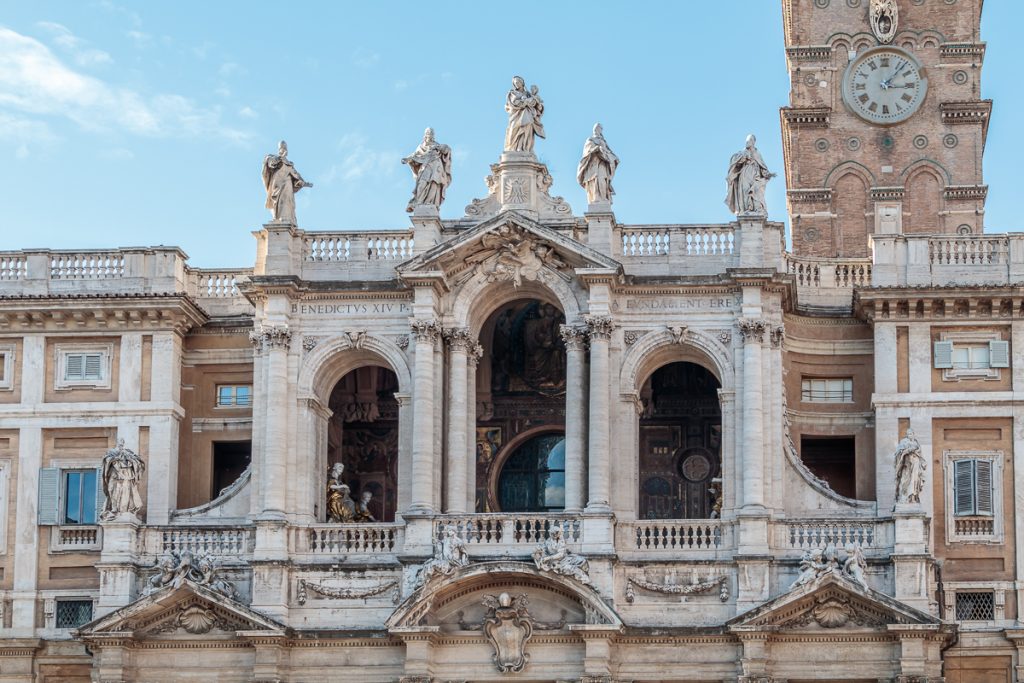 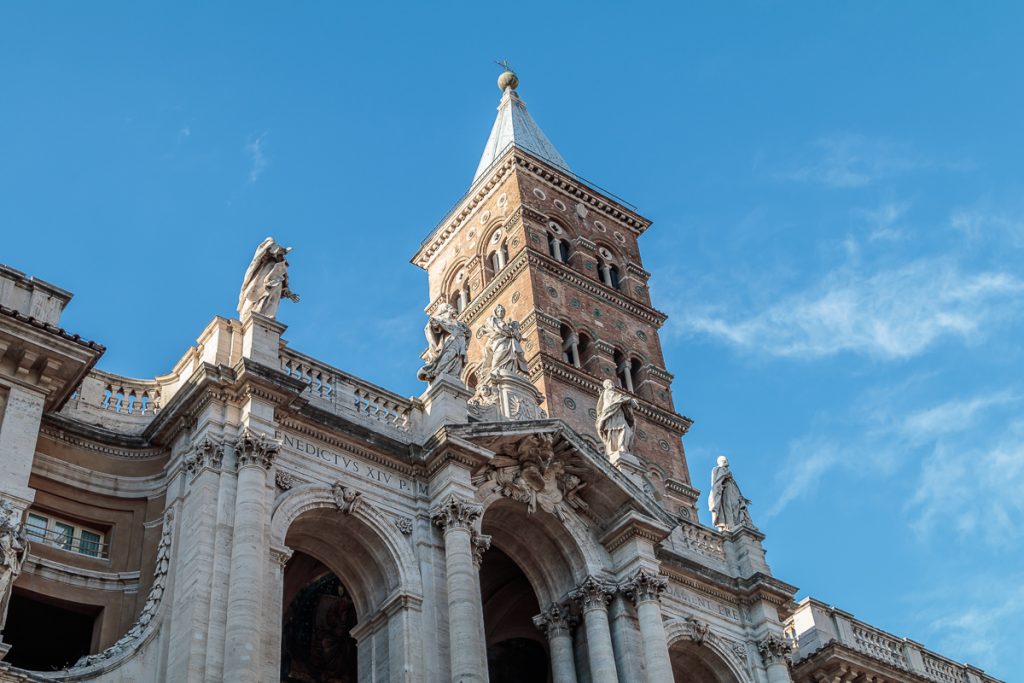 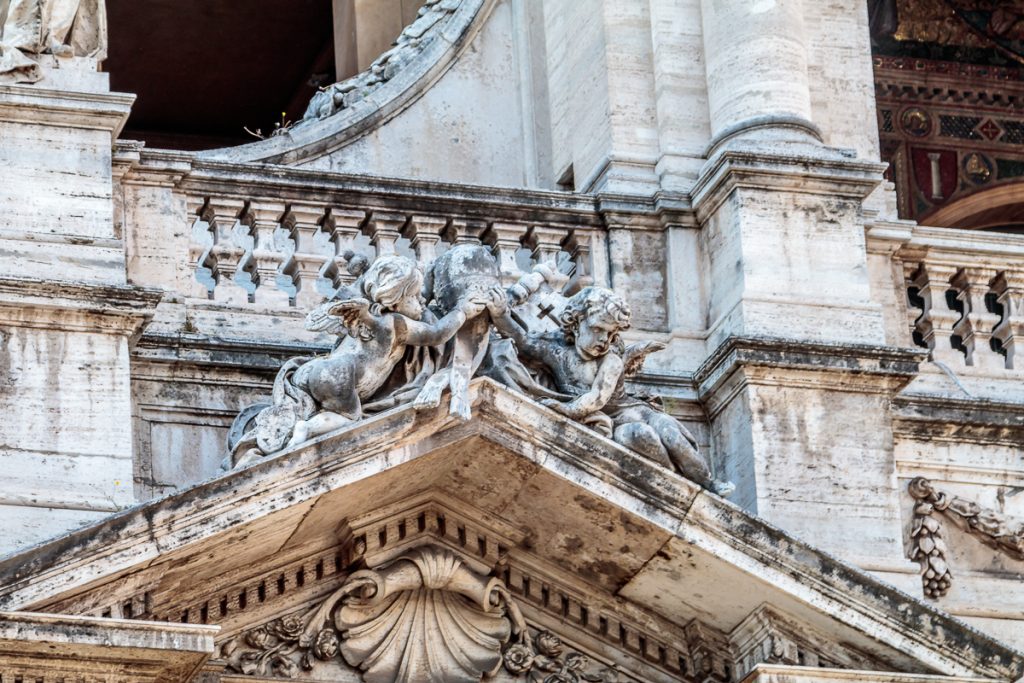 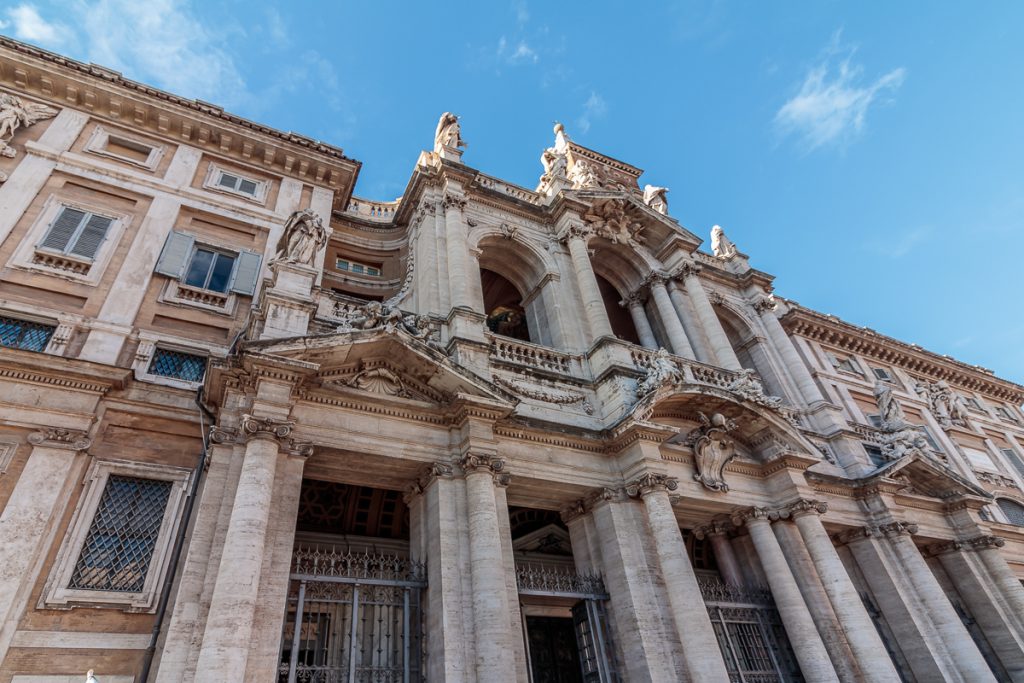 In the piazza outside the basilica is an obelisk with a statue of Mary on top. 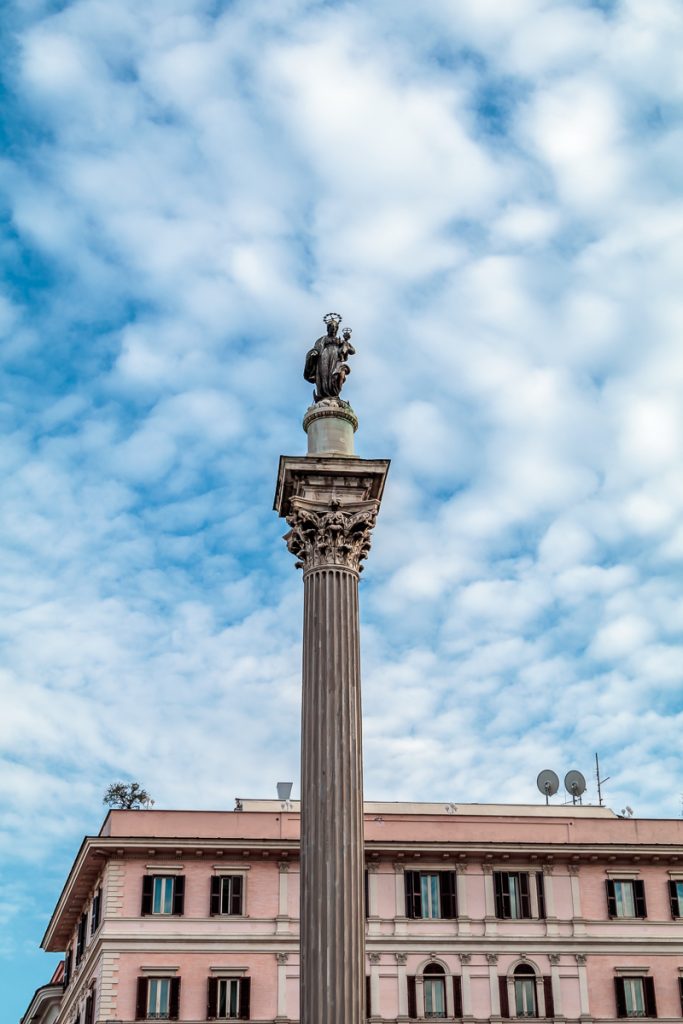 Mary atop the Obelisk 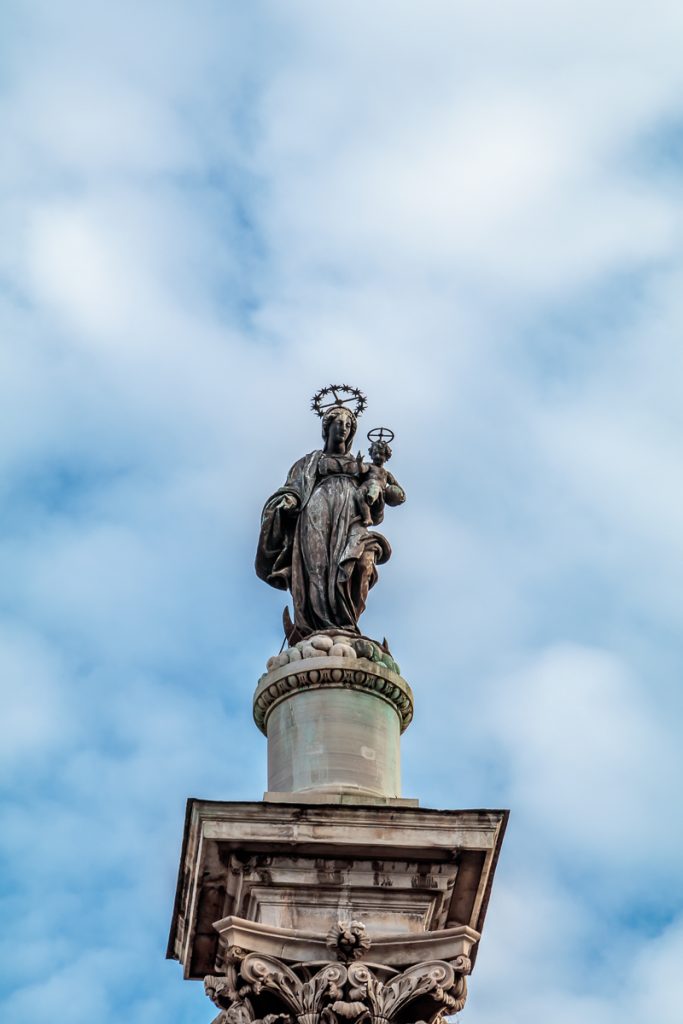 Mary atop the Obelisk

The baldacchino is topped with the papal crown and the keys of St. Peter. 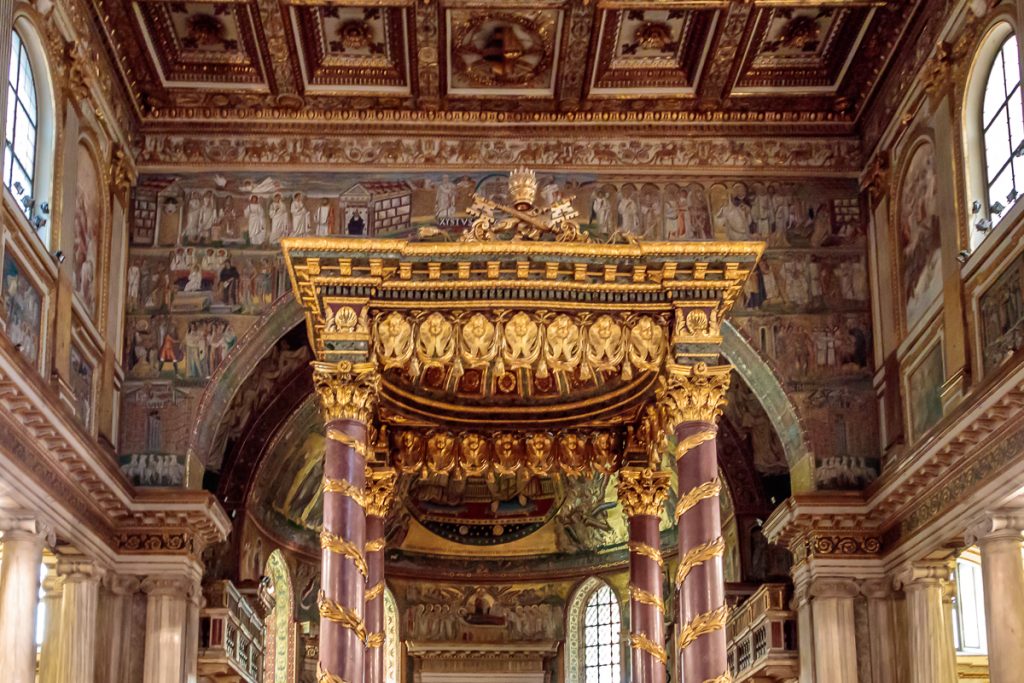 The ceiling inside the baldacchino is a splendid dove of the Holy Spirit. 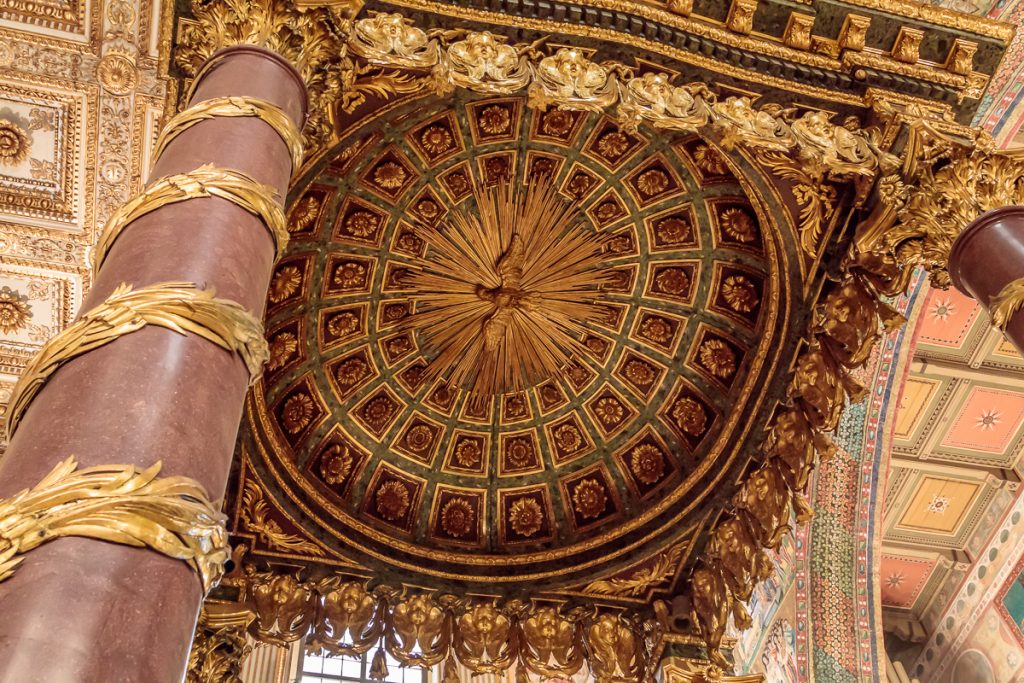 Behind the baldacchino is a painting of the nativity. 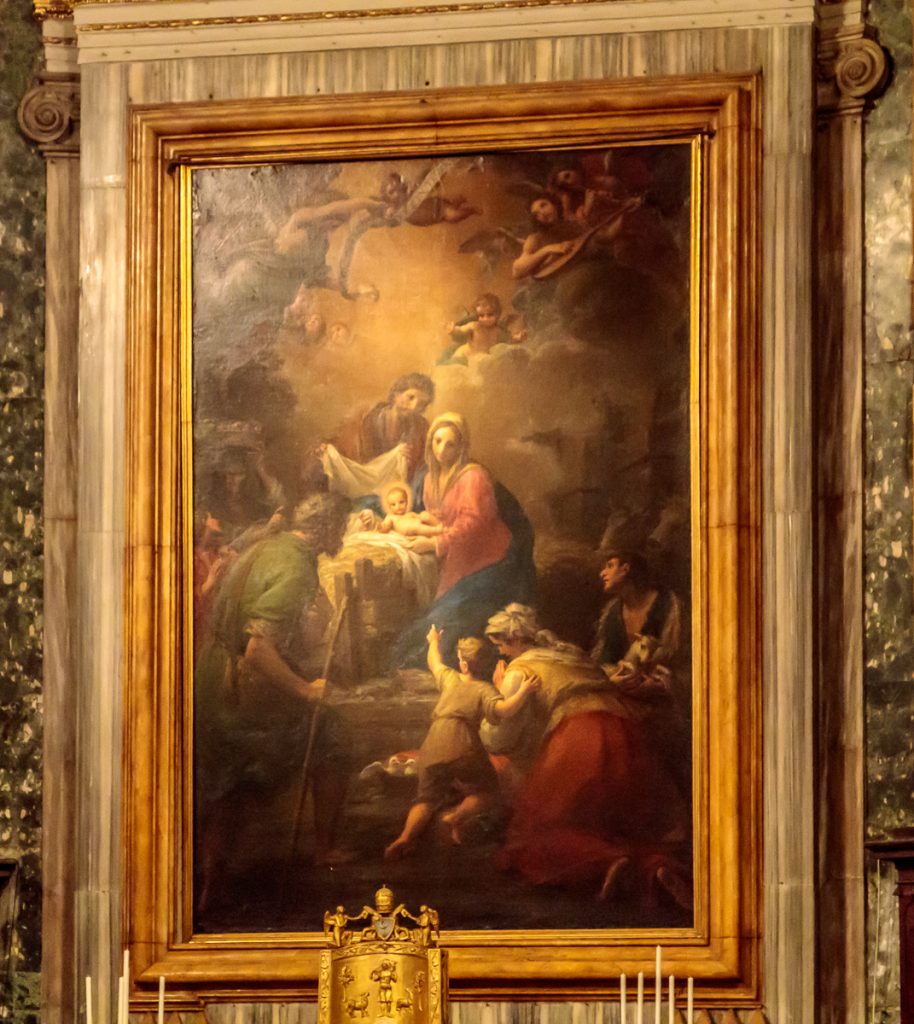 Below the Papal Altar and Baldacchino is the crypt containing the holy crib if Jesus. 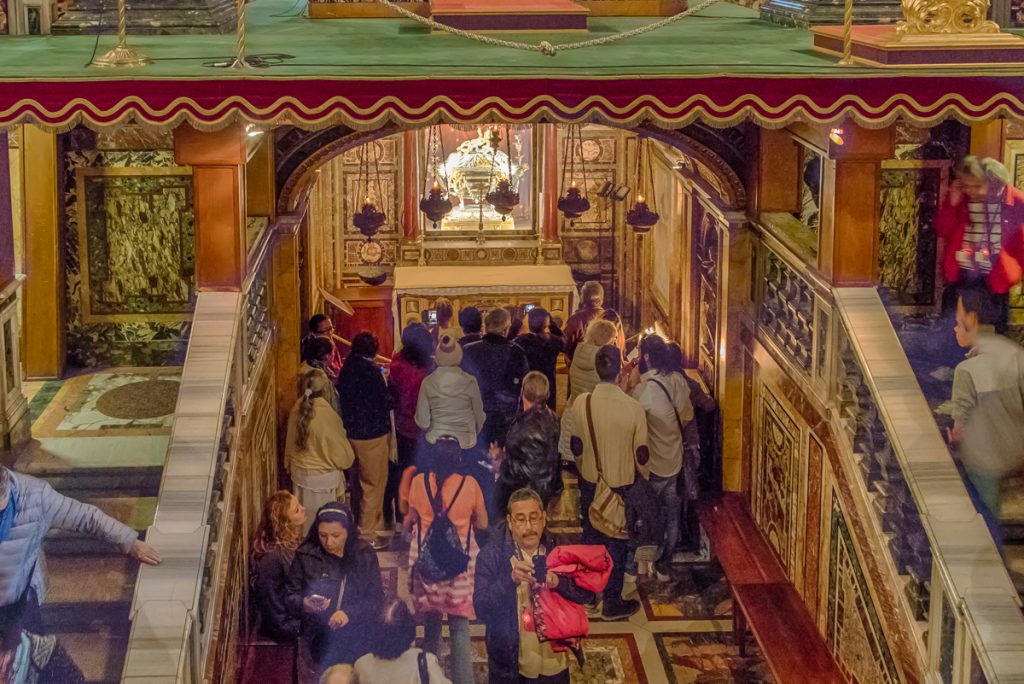 Relic of the Crib of Jesus

However, the most amazing art in this basilica are the mosaics in the triumphal arch and apse, with portions dating to the 5th century, and are one of the oldest representations of the Virgin Mary. 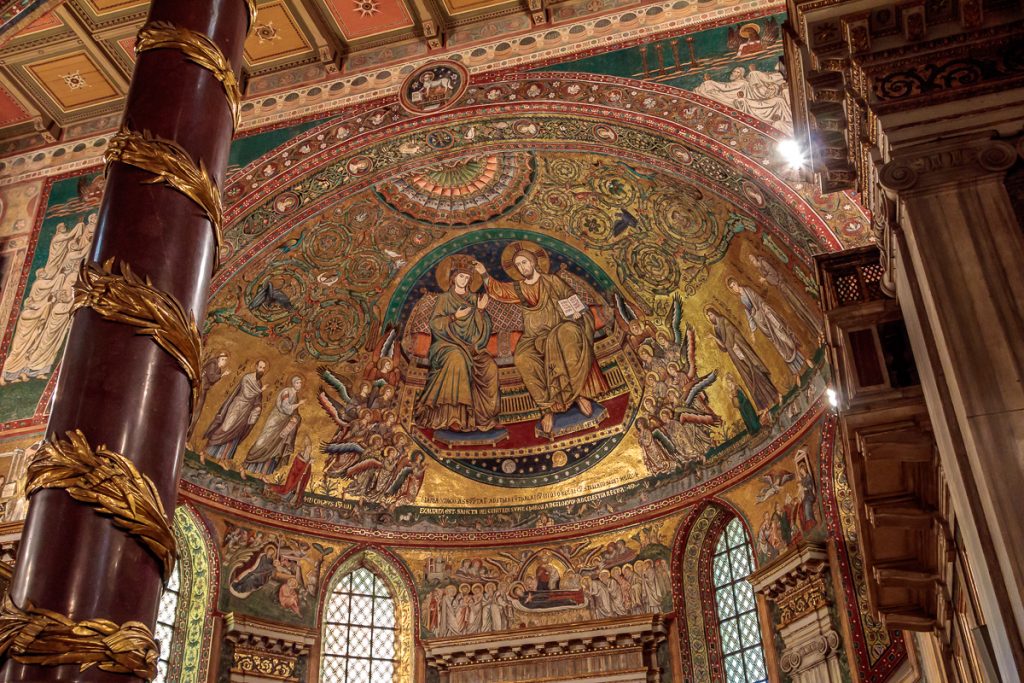 The central image is the crowning, or coronation, of Mary. 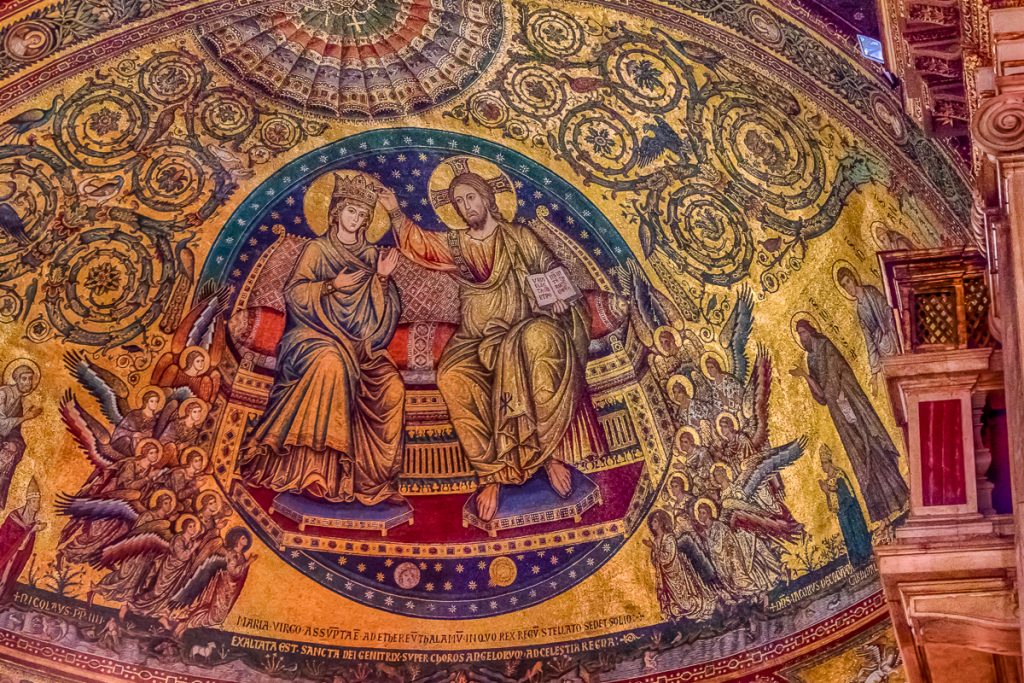 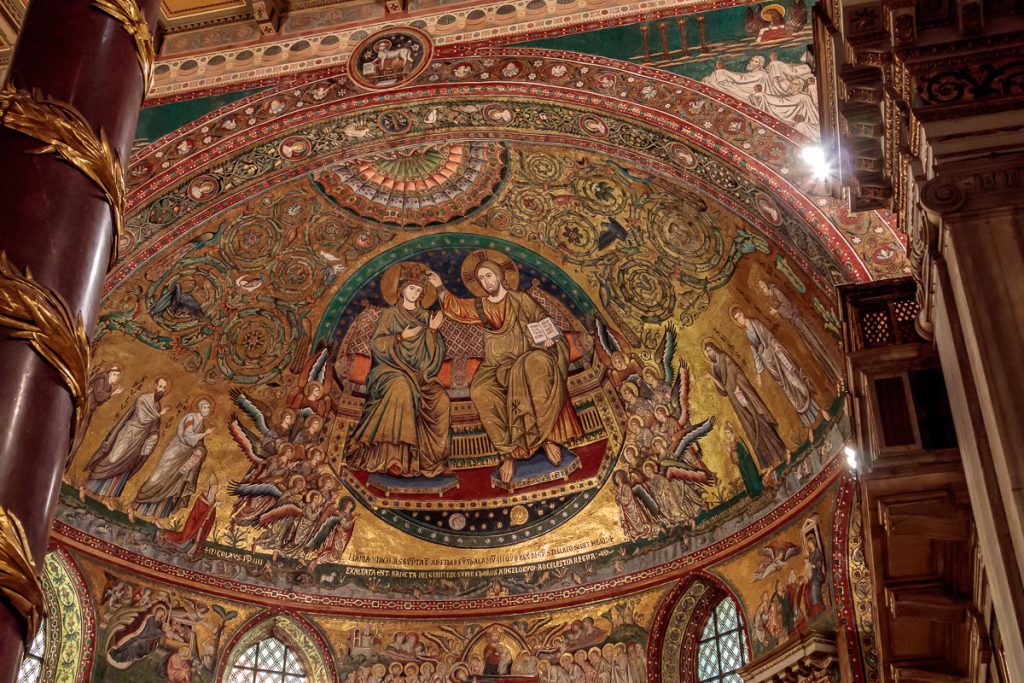 In the lower levels of the apse can be found images representing the Nativity of Jesus, Mary’s dormition and ascension into Heaven, and the gifts of the Magi. 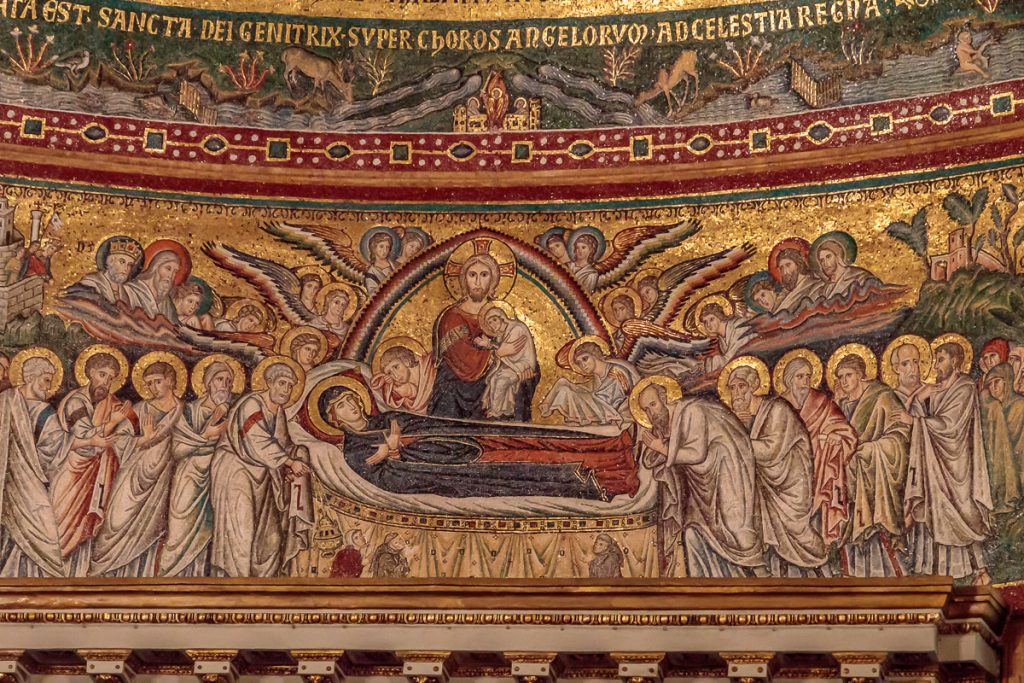 The Triumphal Arch, just below the apse, also contain mosaics.  Here is the central image. 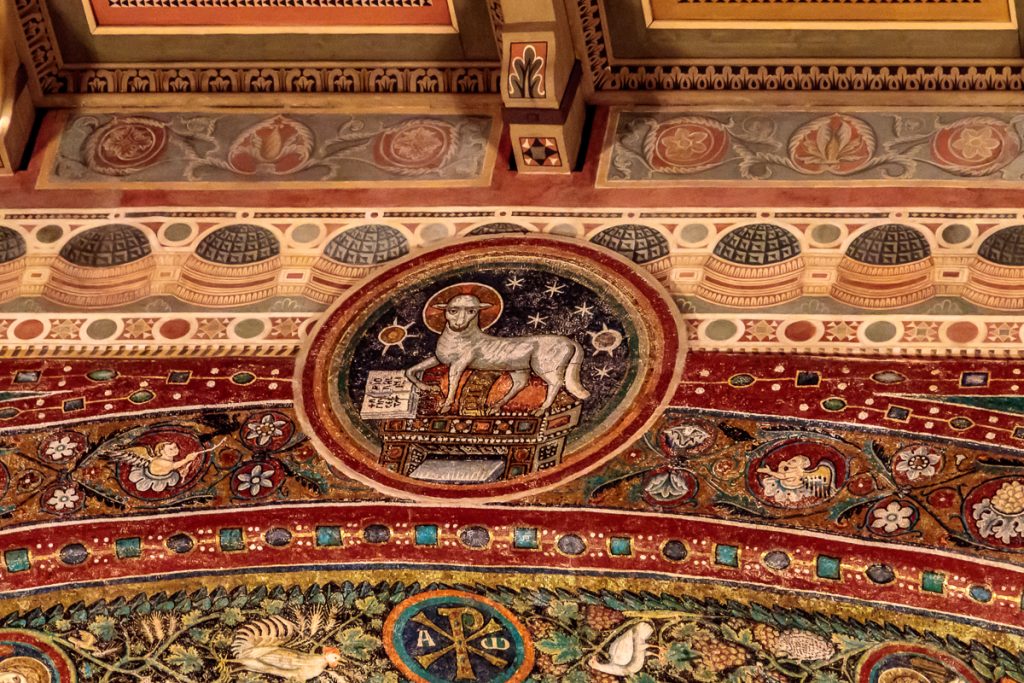 There are many other beautiful places in this basilica.  Here is the tabernacle in the Chapel of the Holy Sacrament. 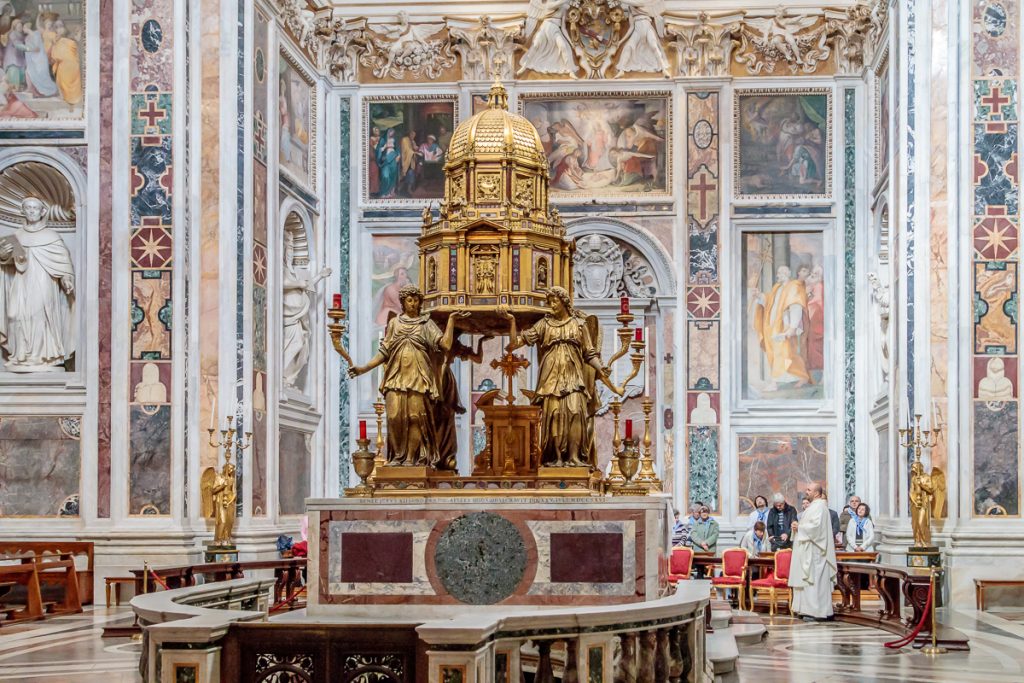 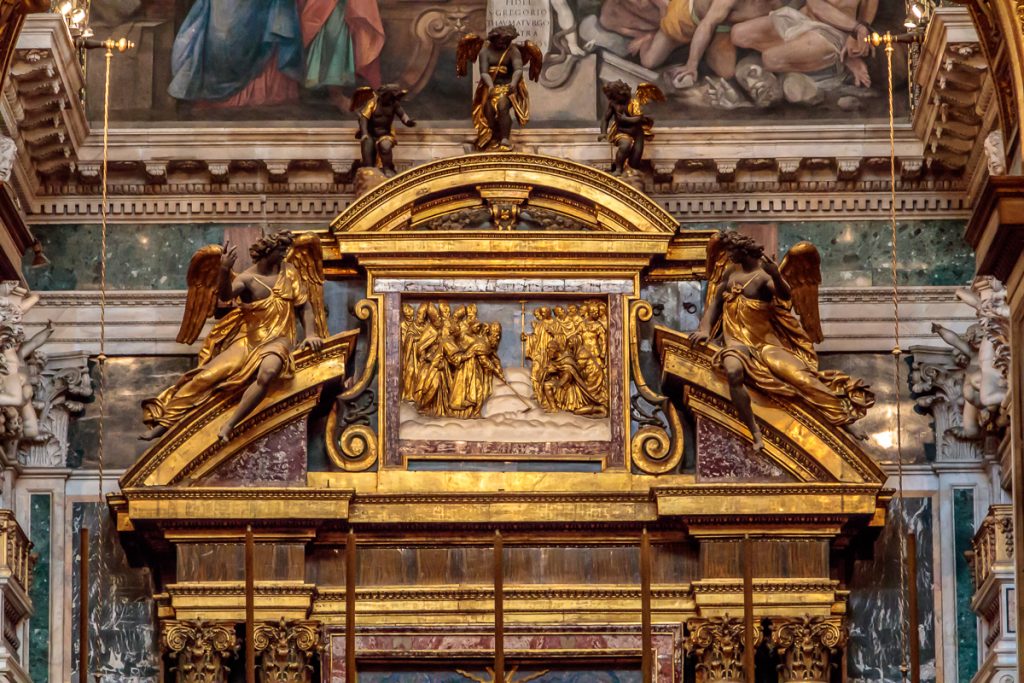 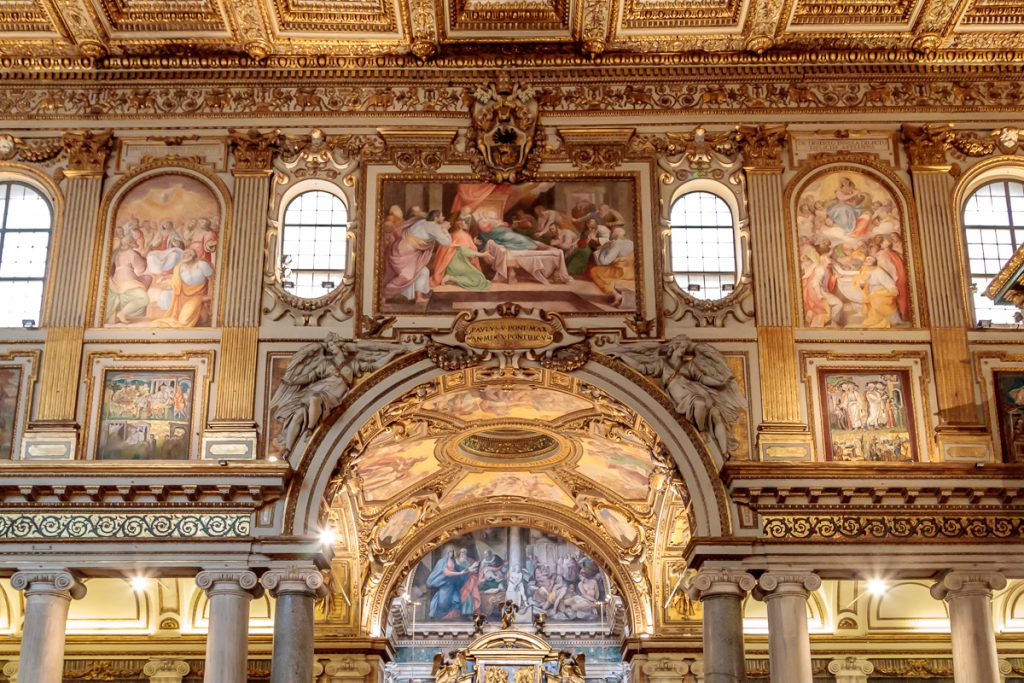 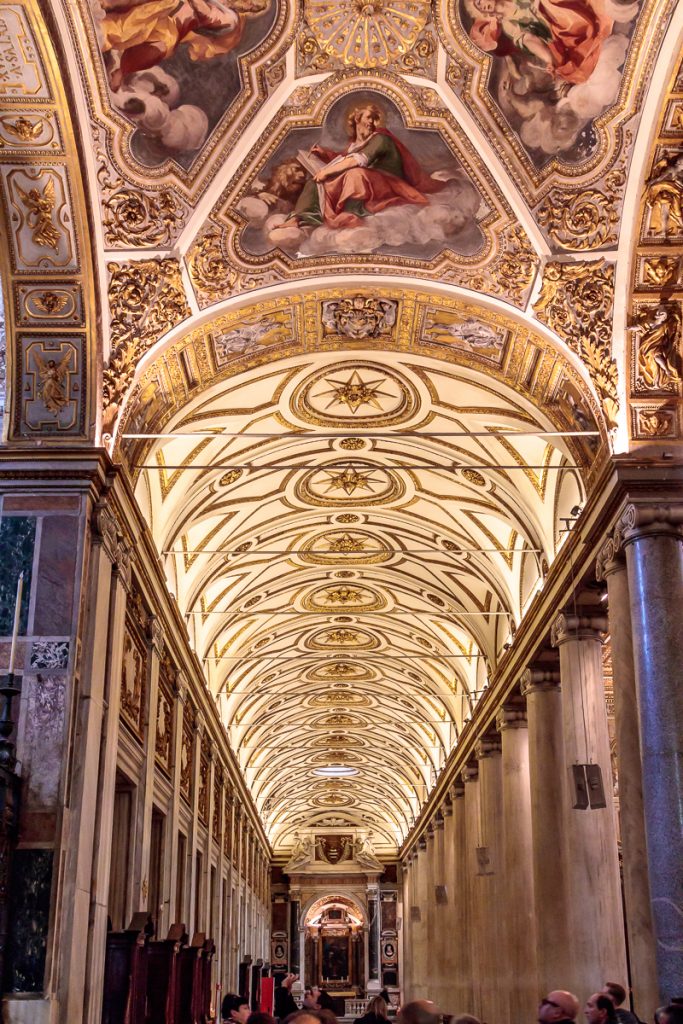 There was much more to see here, but our time was short and the bus was leaving.  The Basilica di Santa Maria Maggiore is a beautiful church, well worth the visit.

All details were taken from WikiPedia.

Next time, the 4th of the major basilicas of Rome, St. Paul’s Outside the Wall.