Here we are at the 4th and last of the major basilicas in Rome, Basilica San Paolo fuori le Mura, or The Basilica of St. Paul Outside the Wall.  This was our third basilica of the day, it was getting late (after dark), and we were all getting tired. 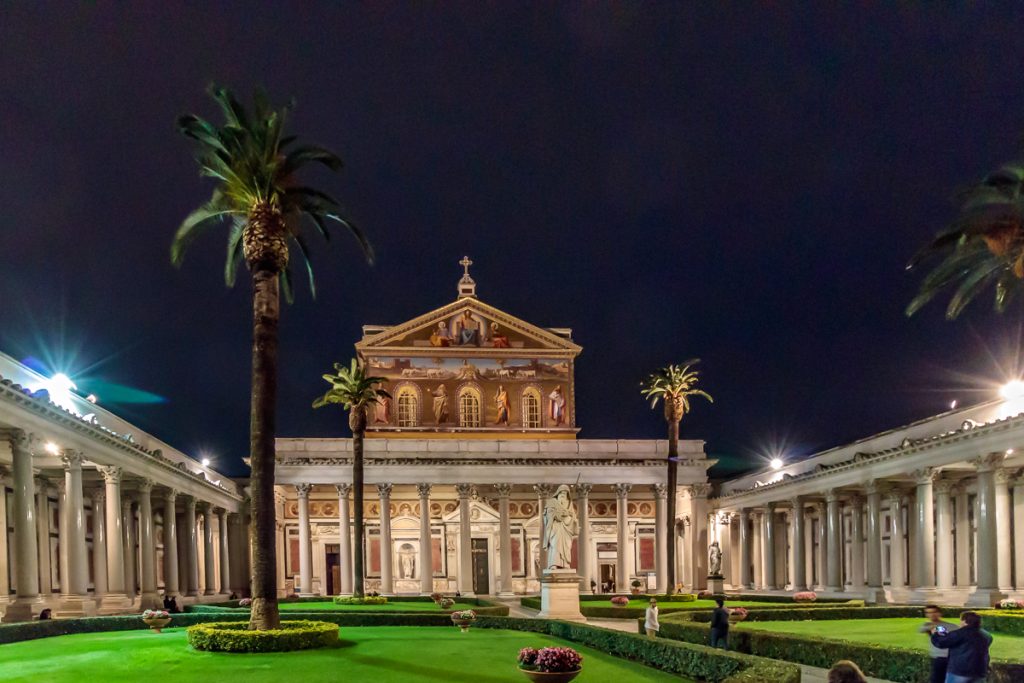 However tired we were, the sight of this basilica revived us all.  This is my favorite of the 4 major basilicas.  The courtyard was surrounded by a square portico, enclosing a beautiful garden.  All of the other basilicas had concrete or a hard surface in the courtyard.  This was so peaceful.

The façade is decorated by mosaics which were done between 1854 and 1874 (based on the designs of Agricola and Consoni). They depict: in the lower section, Isaiah, Jeremiah, Ezekiel and Daniel and in the central section, the mystical Lamb surrounded by four rivers which symbolize the four Gospels, and by twelve lambs representing the twelve Apostles. In the upper section, Christ is situated between Peter and Paul.  It truly is beautiful. 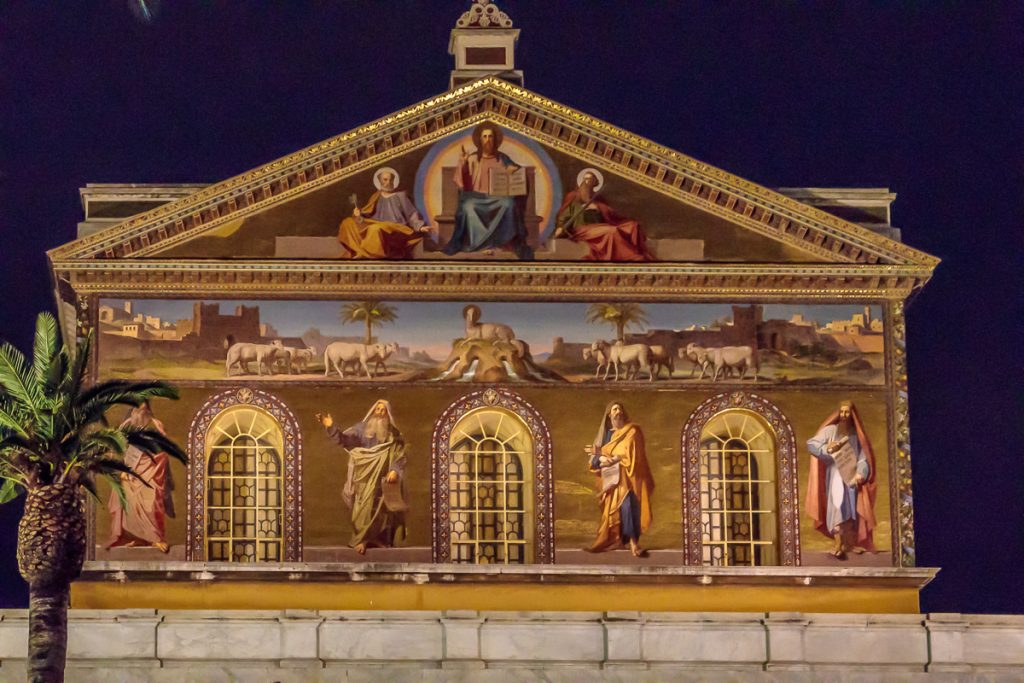 Facade of St. Paul’s Outside the Walls 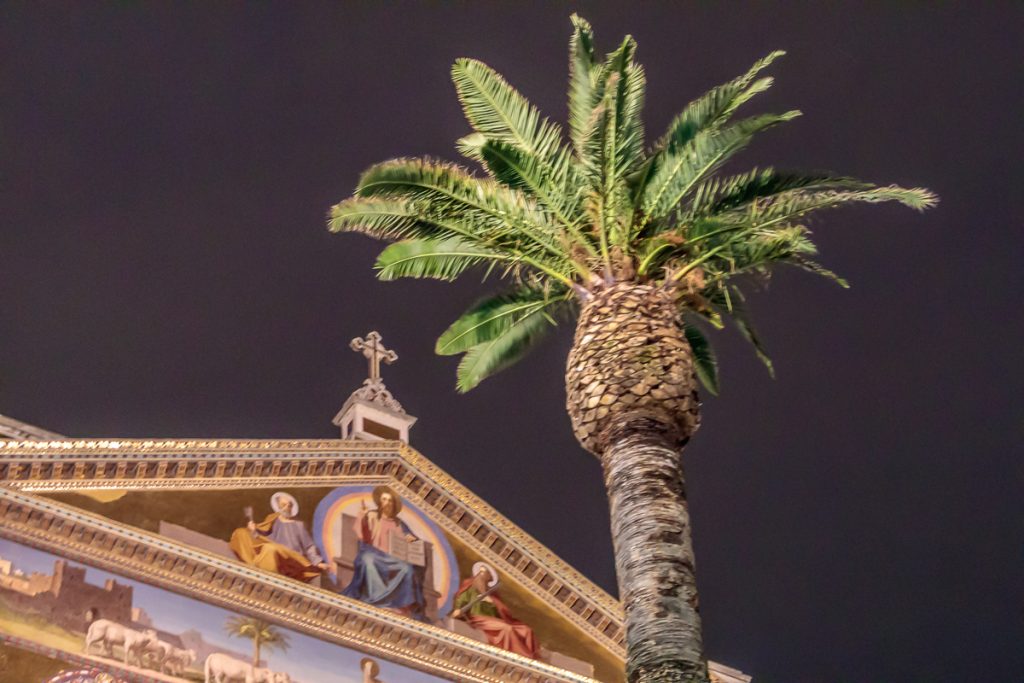 Palm Tree at St. Paul Outside the Walls

A colossal statue of Saint Paul stands right at the center of the garden and was sculpted by Giuseppe Obici (1807-1878).  Paul is holding a two-edged sword.

“Indeed, the word of God is living and effective, sharper than any two-edged sword, penetrating even between soul and spirit, joints and marrow, and able to discern reflections and thoughts of the heart.” (Heb 4:12)

“May the praise of God be in their mouths and a double-edged sword in their hands”  Ps 149:6 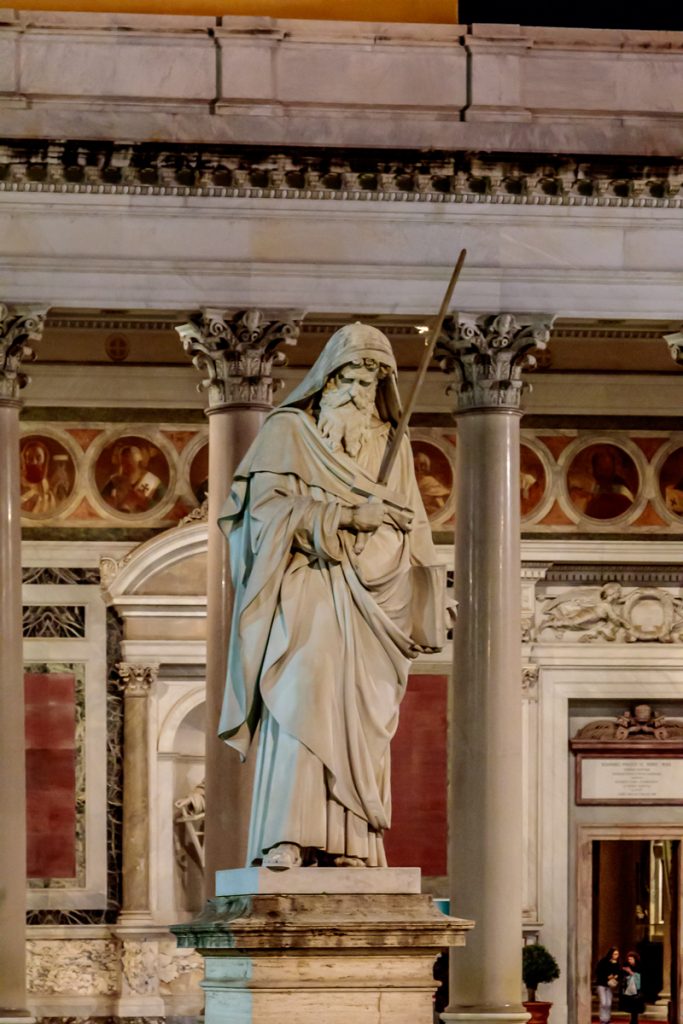 Several statues adorn the outside of the basilica.  Here are Saint Peter (holding the keys of heaven) and Saint Paul.  I do not know the third. 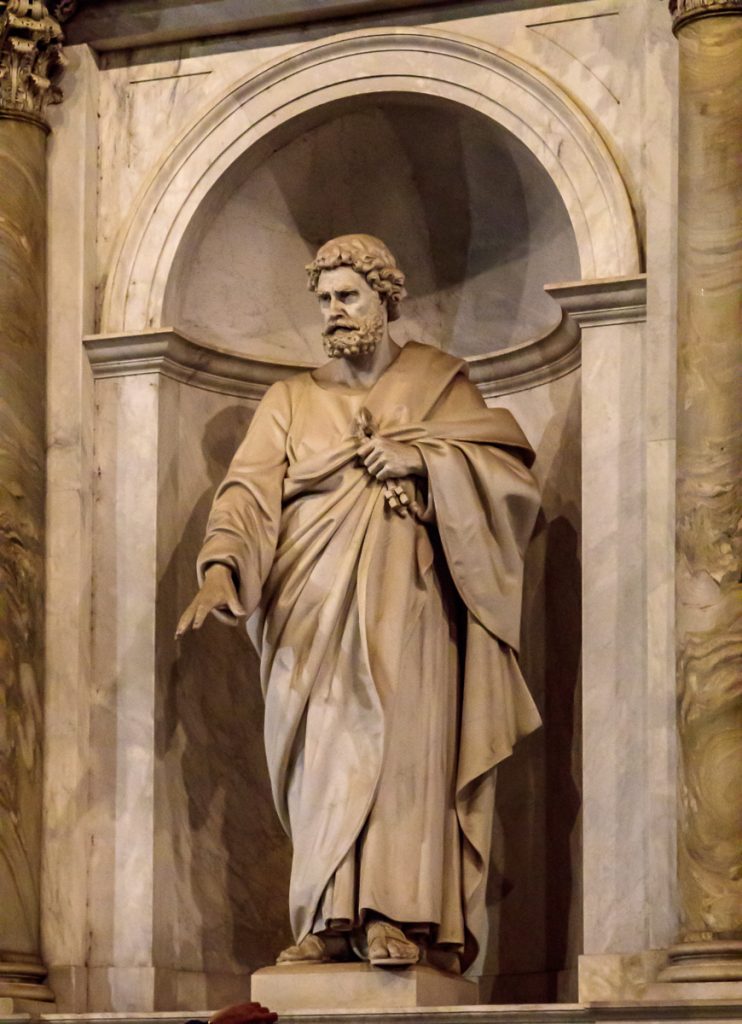 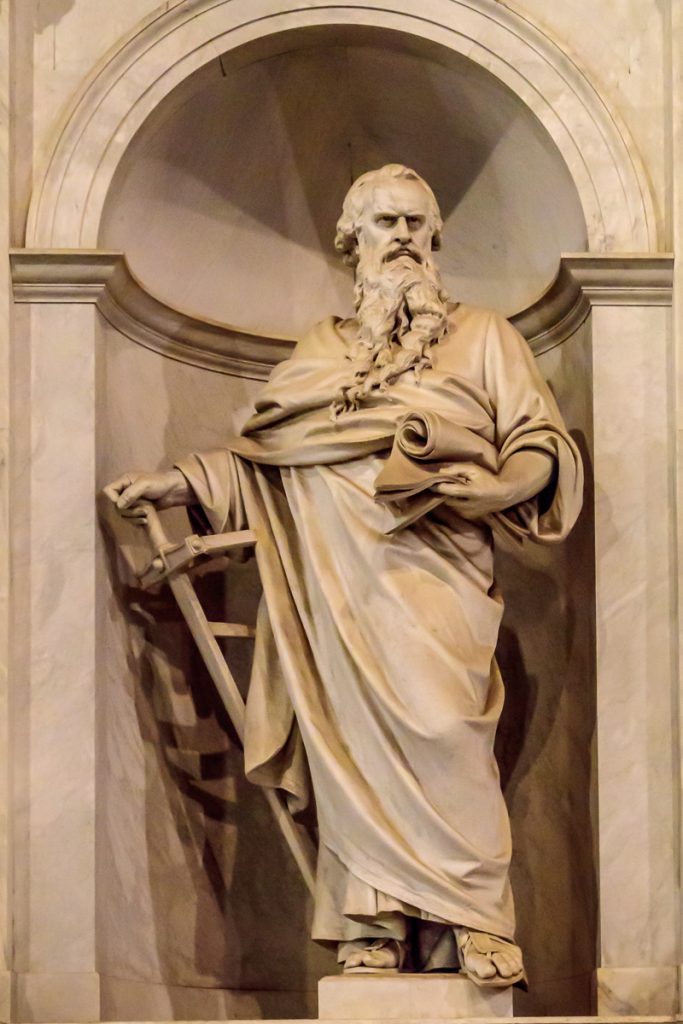 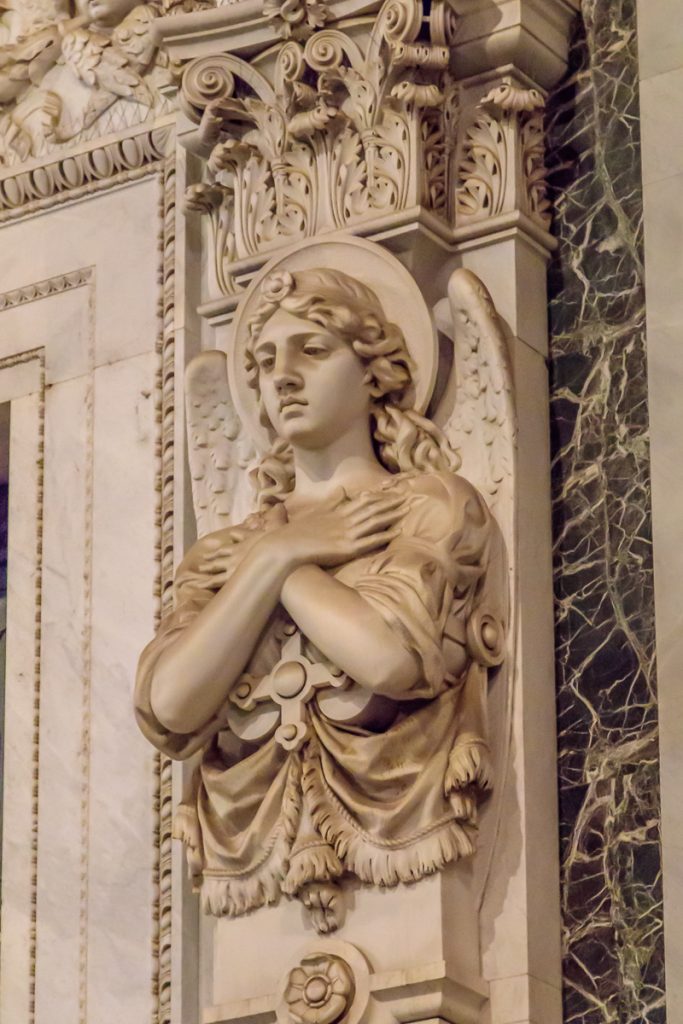 Upon entering the basilica, there is much to see.  This crucifix was on one of the altars. 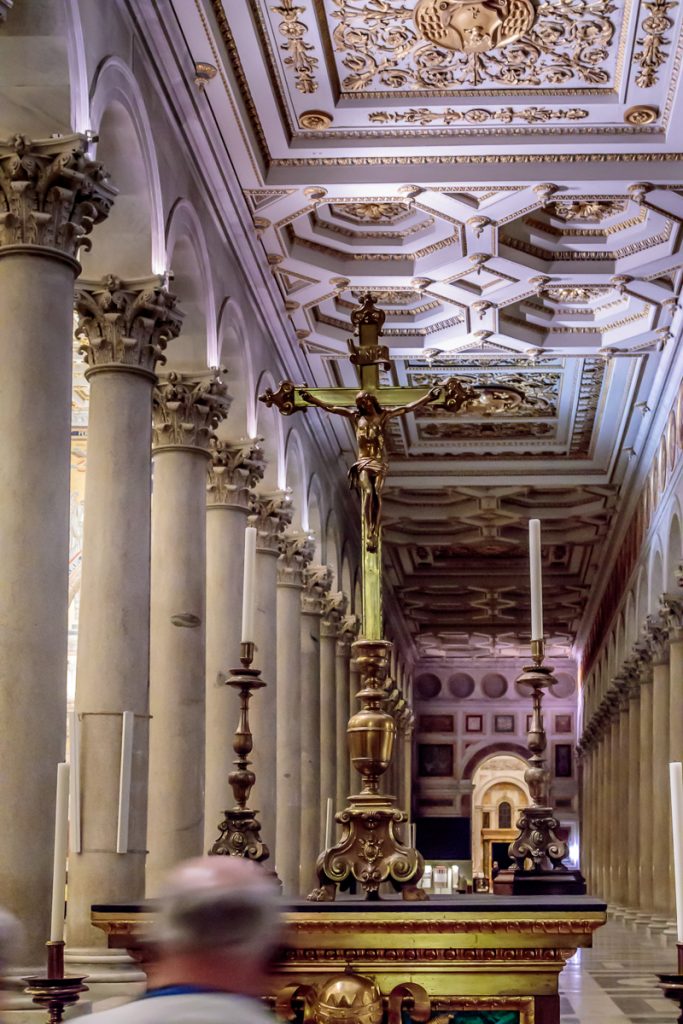 Why am I always drawn to the ceilings of these great basilicas?  This one did not disappoint. 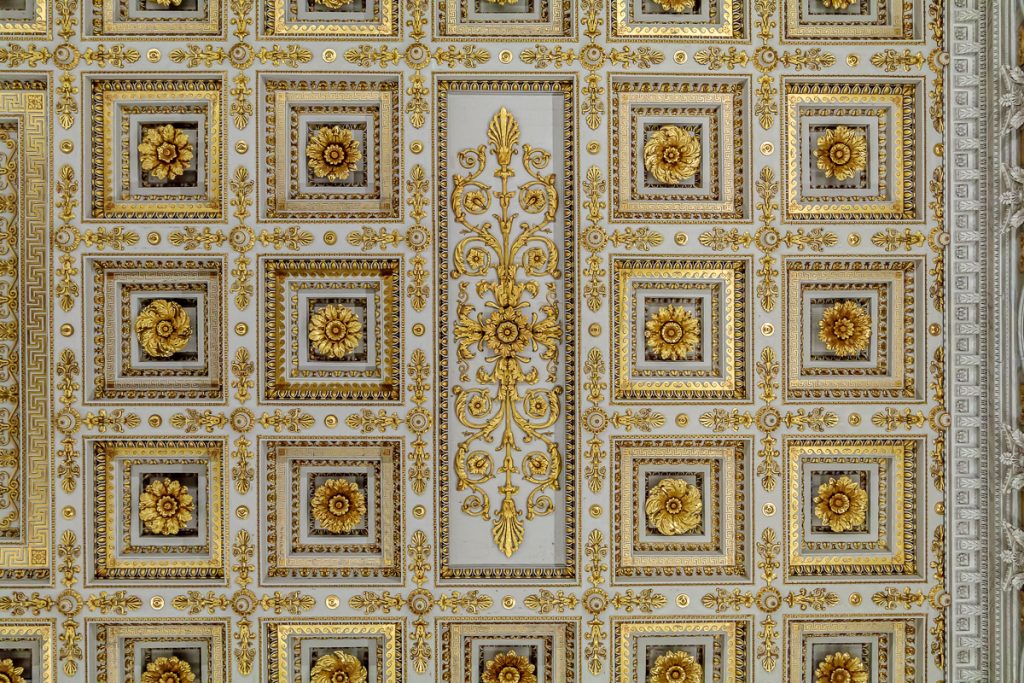 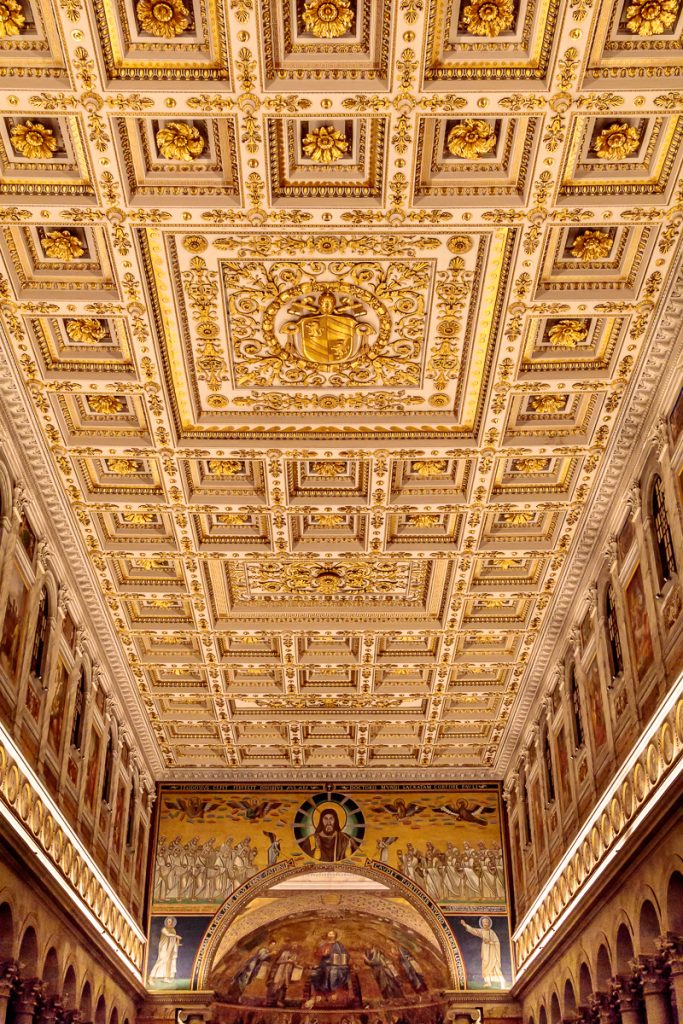 Ceiling Leading to the Triumphal Arch

Here is the baldicchino over the Papal Altar.  Below the altar is the tomb of St. Paul. 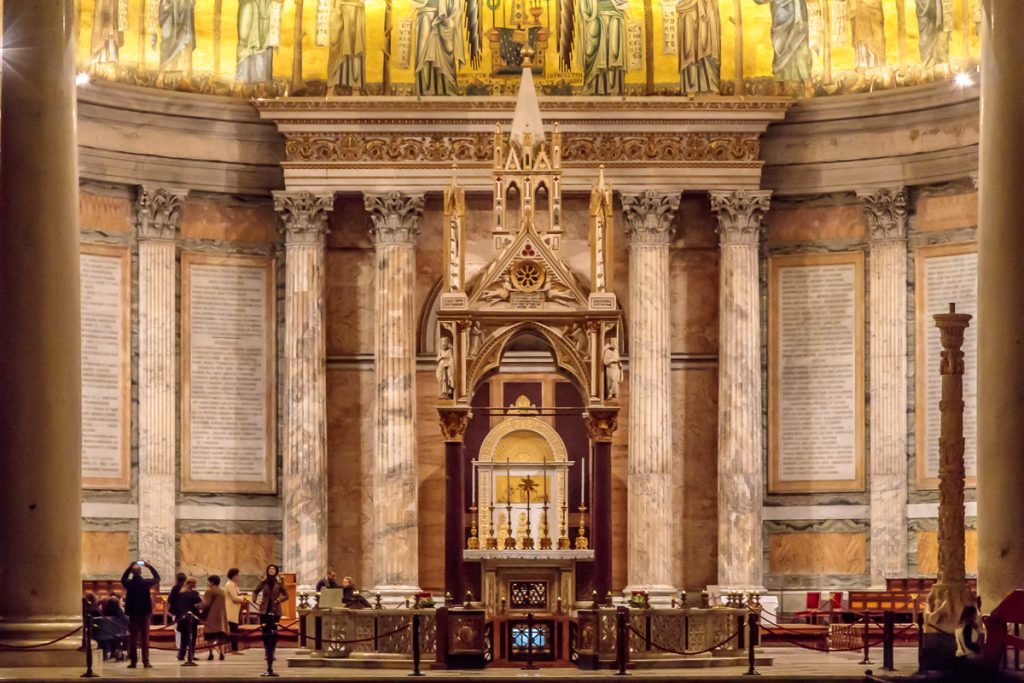 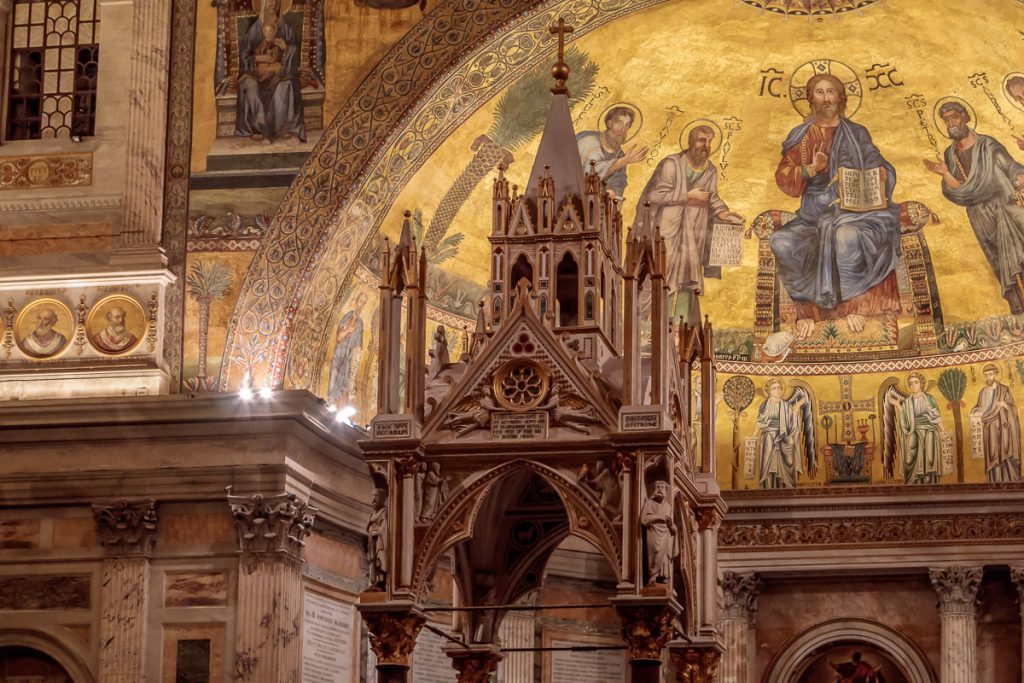 Looking up above the baldacchino is the Triumphal Arch.  These mosaics are some of the few remaining from the originals dating to the 13th century. 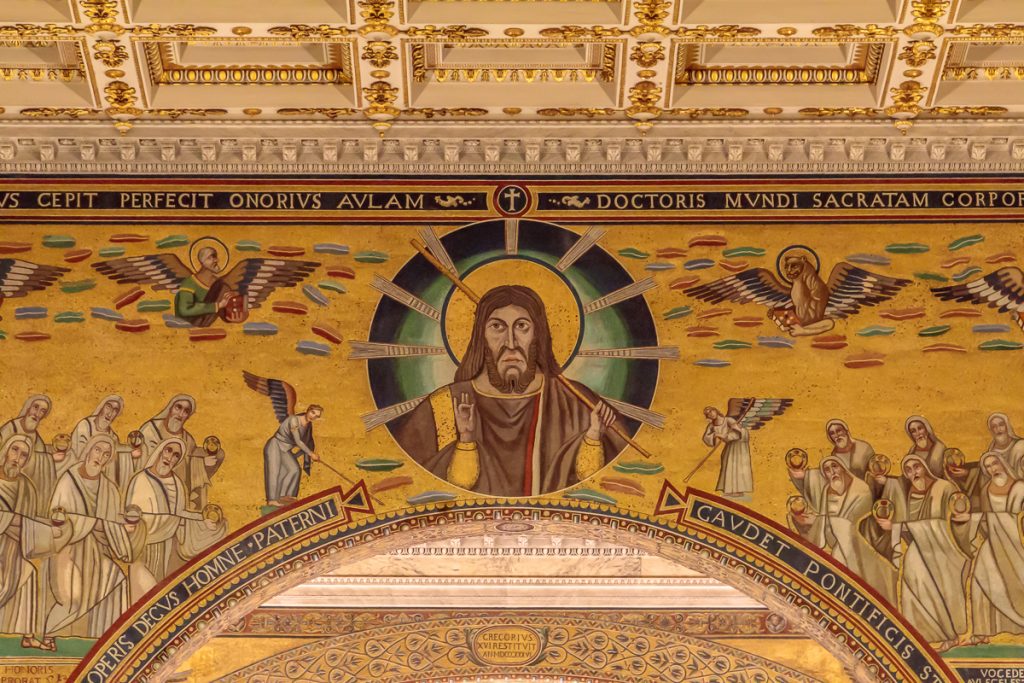 The apse also contains remnants of the 13th century mosaics that were partially destroyed by fire in 1823. 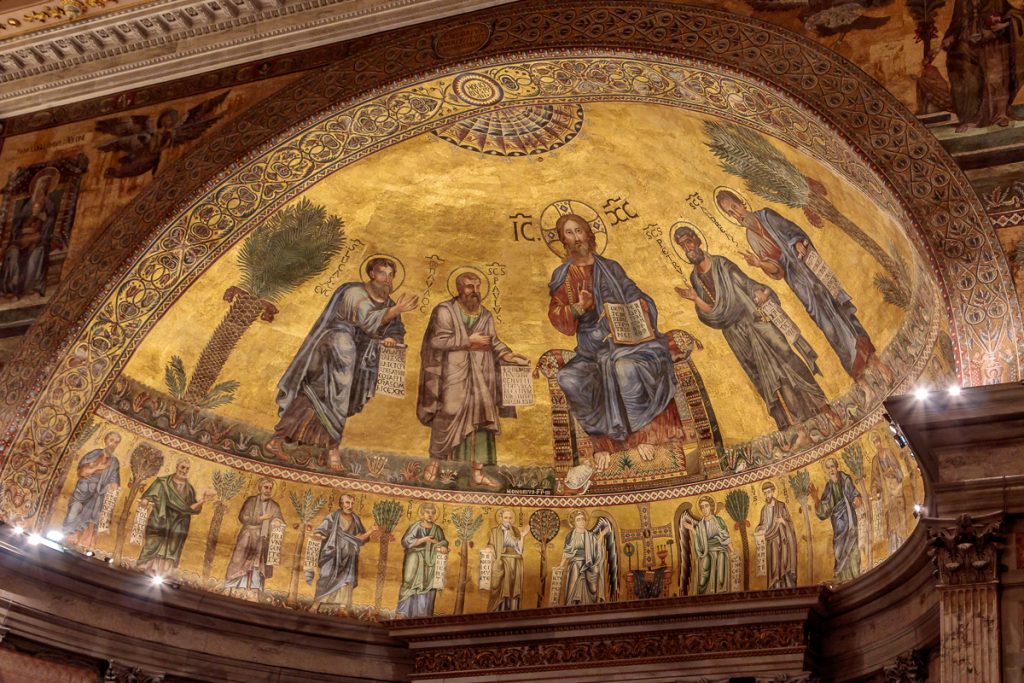 Apse of St. Paul’s Outside the Walls 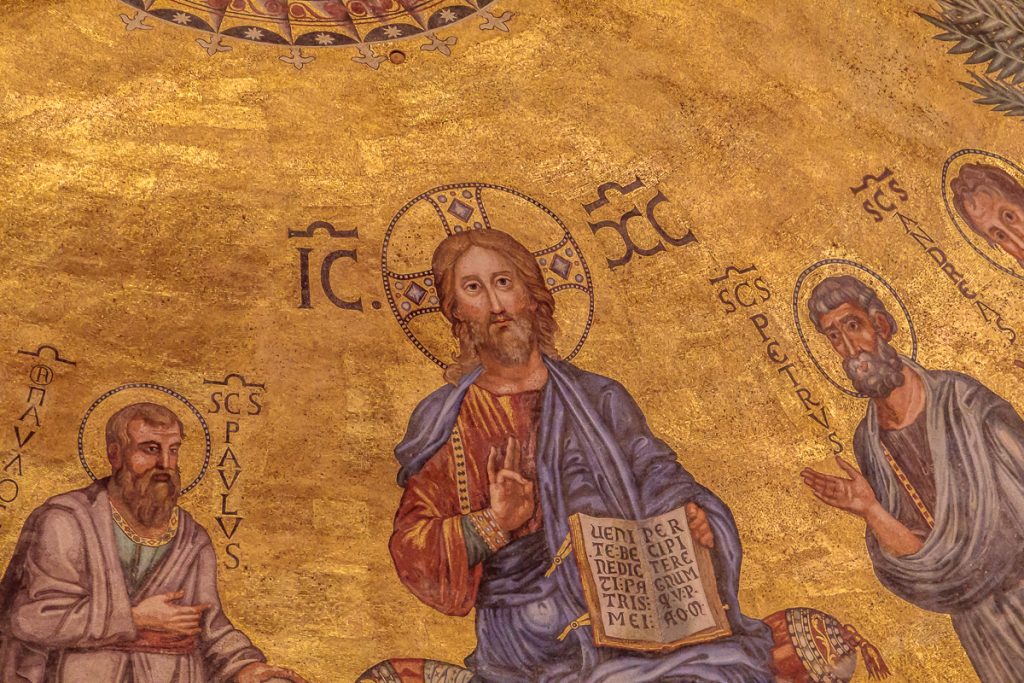 There is a small portrait of Pope Honorius III depicted at the feet of Jesus in the mosaic.  Pope Honorius II ordered the mosaic in 1220).  Pope Paul VI desribed this in 1963: “Honorius III is represented in adoration before Christ, a tiny figure bowed down to kiss Christ’s feet who, in His Greatness, is presiding over the assembly gathered in the Basilica, that is the Church”. 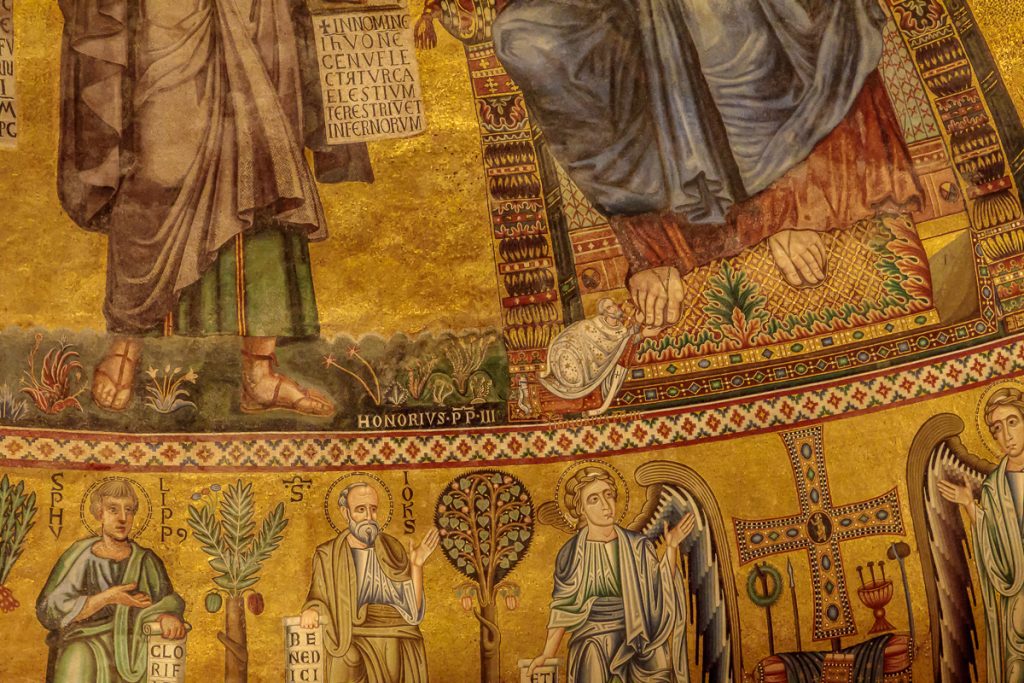 Honorius III Depicted at the Feet of Jesus

This basilica is also known for the medallions surrounding the church, each depicting a pope, starting with St. Peter and ending with Pope Francis. 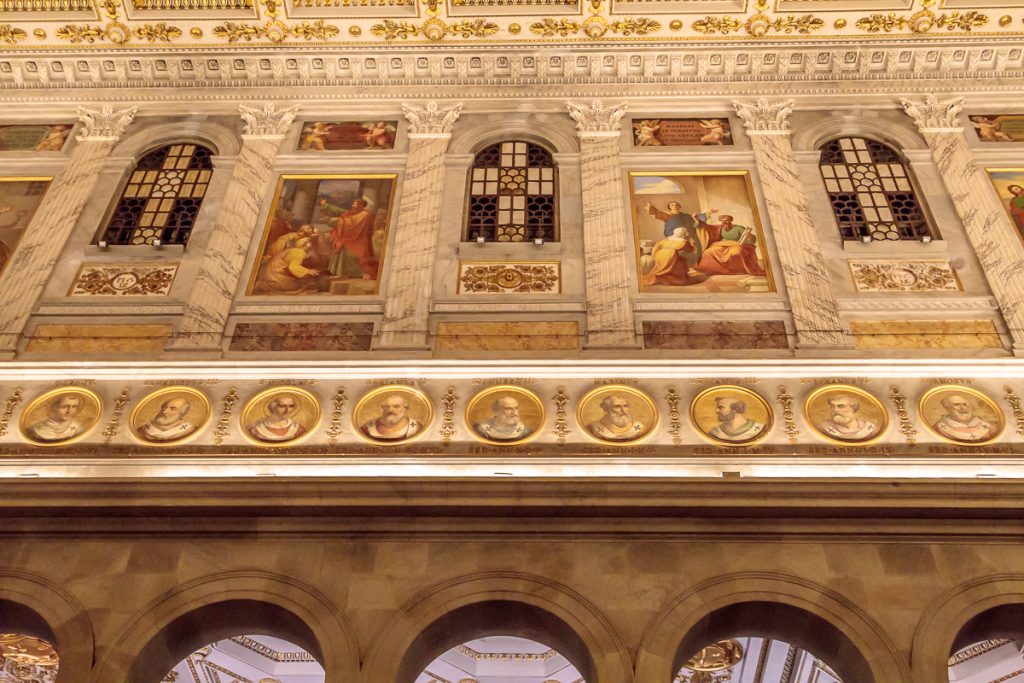 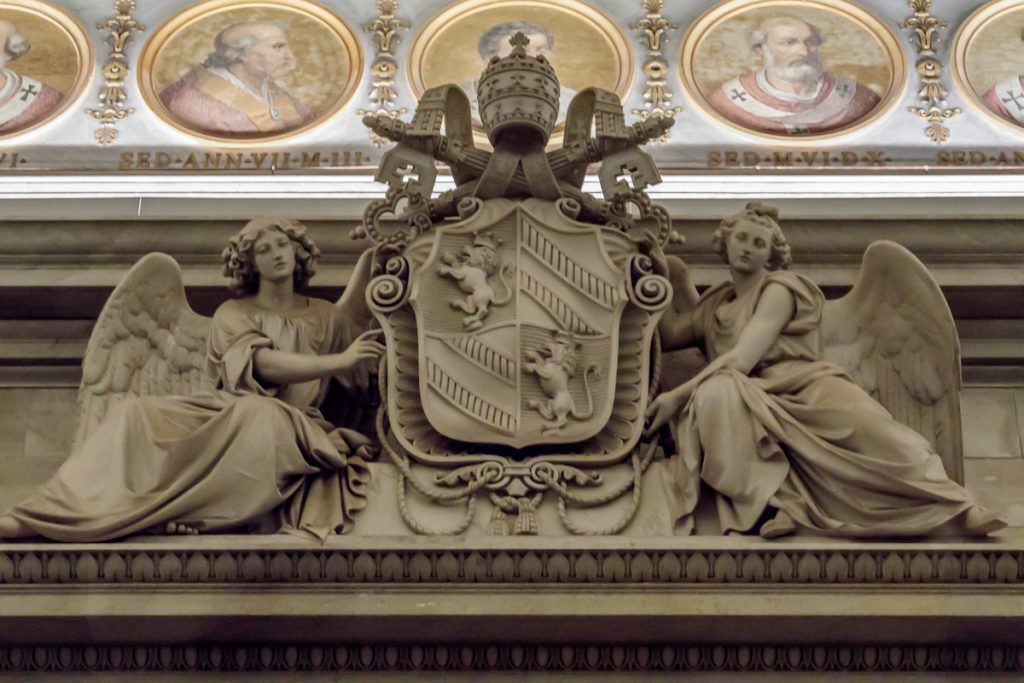 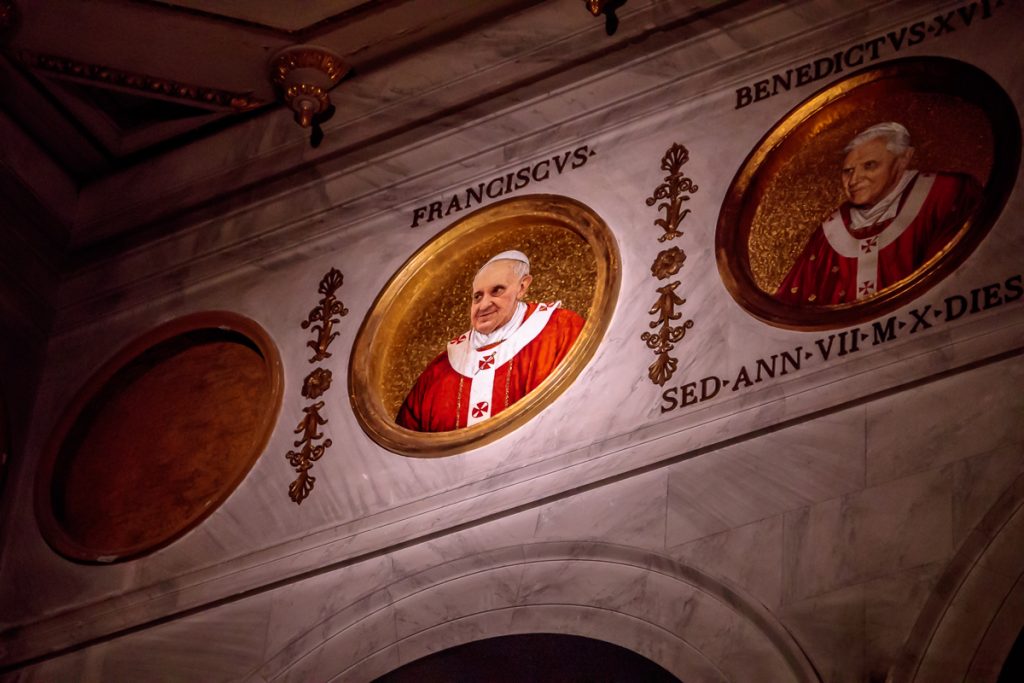 And still, so much more to see.  This is one of two altars made of malachite. 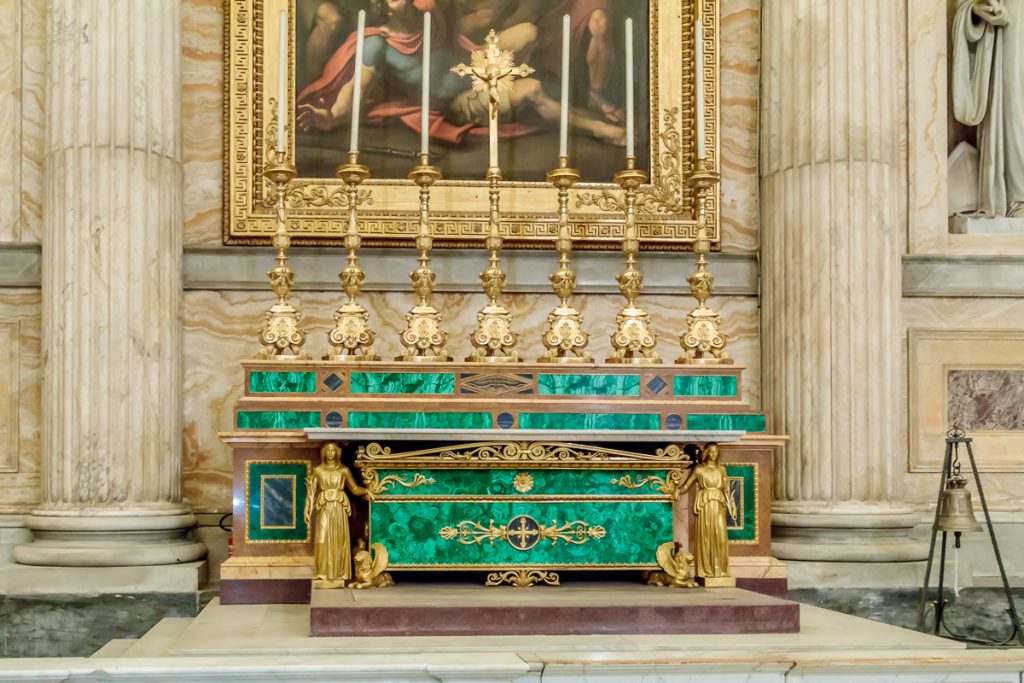 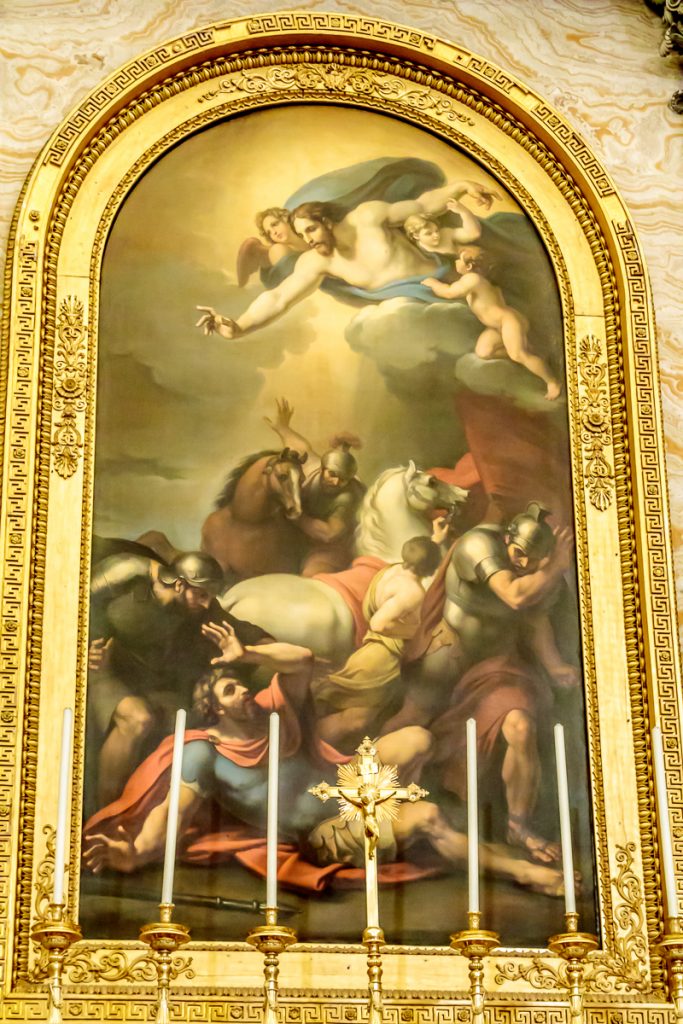 This Paschal candlestick was carved in the 13th century, and is still used today. 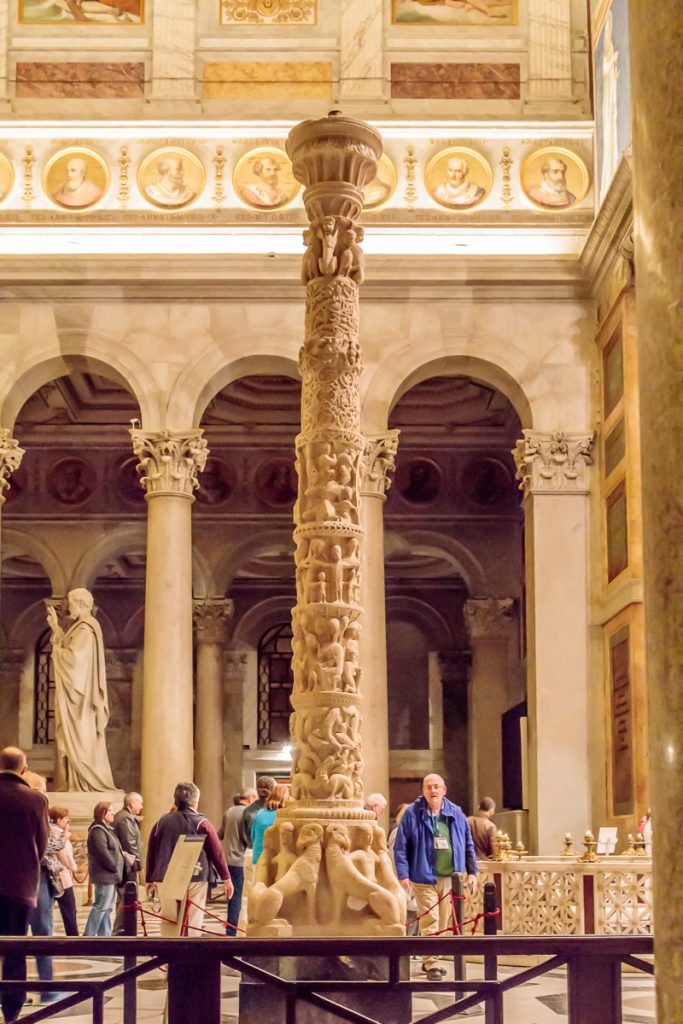 It had been a really long day, but I’m so glad we didn’t miss this.  OK, back to the hotel and time for dinner.

Details came from WikiPedia and http://www.vatican.va/various/basiliche/san_paolo/en/basilica/oro_basilica.htm