We visited other churches in Rome that may not be as well know as the major basilicas, but are absolutely beautiful.  In this post, I’ll show three of those; Santo Spirito in Sassia, Chiesa di Sant’ Ignazio di Loyola, and Chiesa di San Marcello al Corso.

The church stands on the site of a charitable institution for pilgrims (like us) and today is only two blocks from the piazza of St. Peter’s. It included a hostel and a chapel dedicated to Santa Maria. It was rebuilt in the 12th century and subsequently restored several times. In 1475 Pope Sixtus IV commissioned joining the church to the nearby Hospital of the Holy Spirit for foundlings and given a bell tower. In 1538–1545, Antonio da Sangallo the Younger, or Baldassare Peruzzi, rebuilt the church after it had been damaged during the Sack of Rome. An organ, which survives, was added in 1547. In 1585–1590, Pope Sixtus V had the exterior restored, giving the church its present façade by Ottavio Mascherino, inspired by a design of Sangallo. In the upper middle section is a circular window, and above that is the coat-of-arms of Pope Sixtus V.

We attended mass here on Thursday, our last day in Rome. 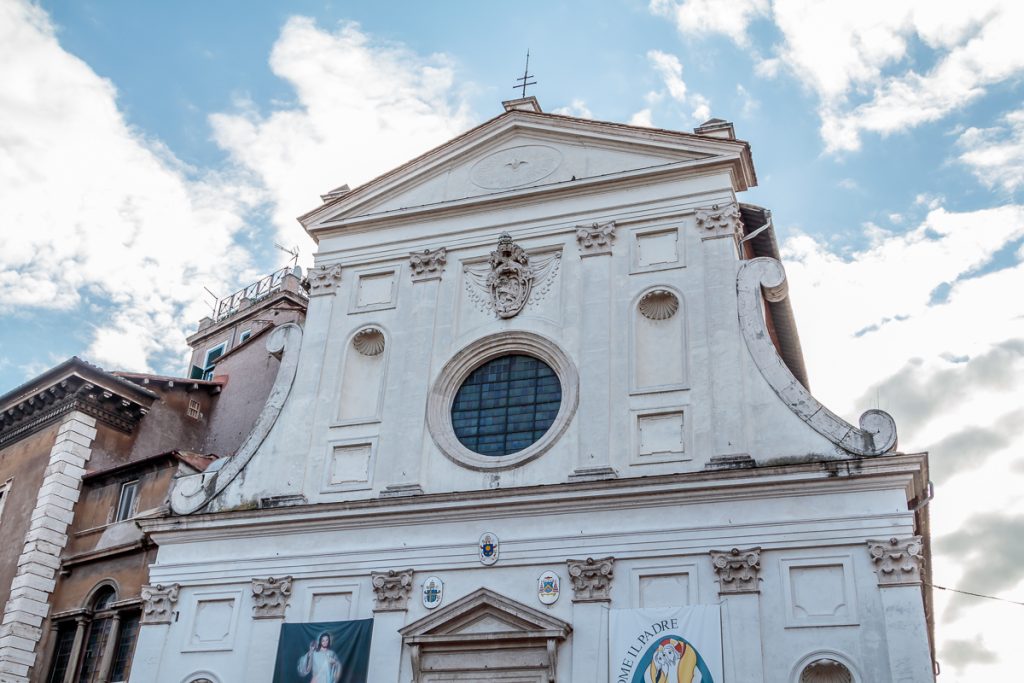 Facade of Santo Spirito in Sassia

The altar cloth in the foreground states “Tu sei sacerdote per sempre”, or “You are a priest forever”. 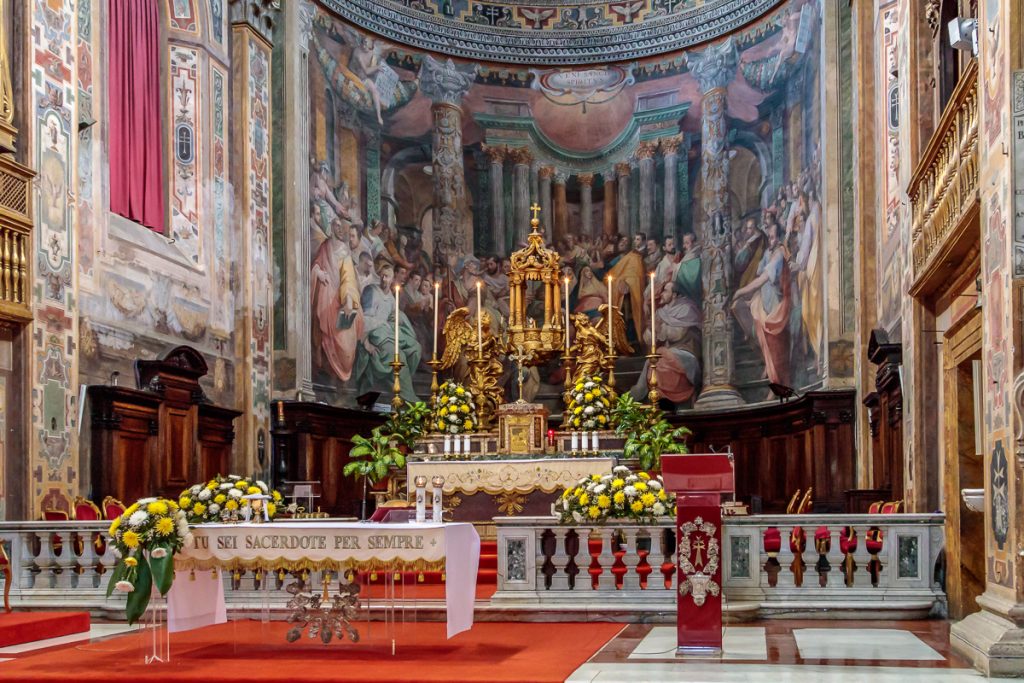 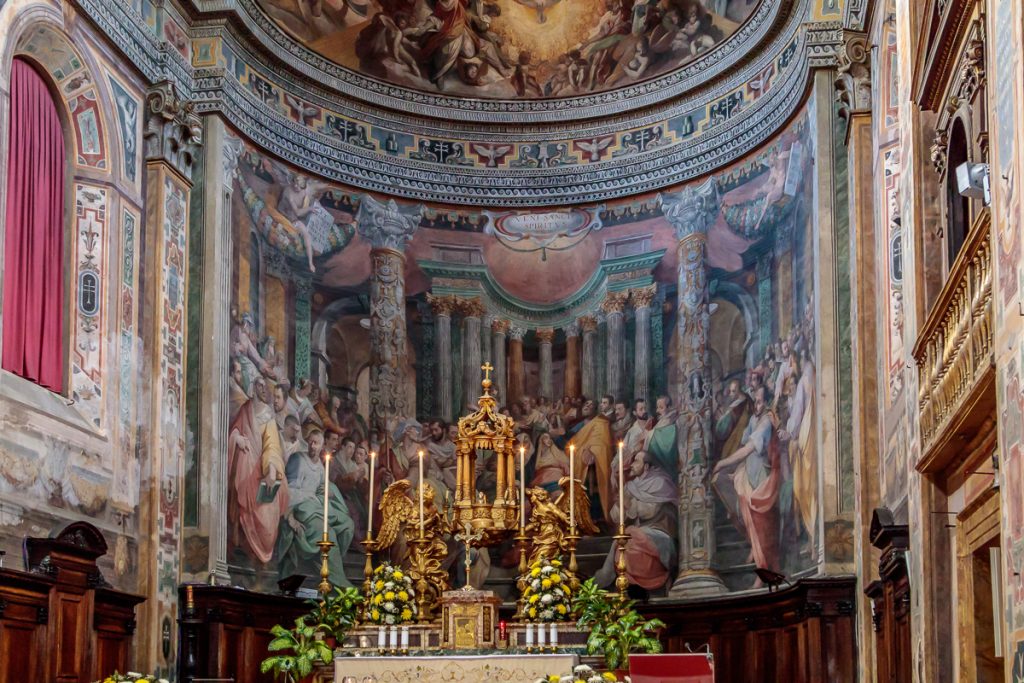 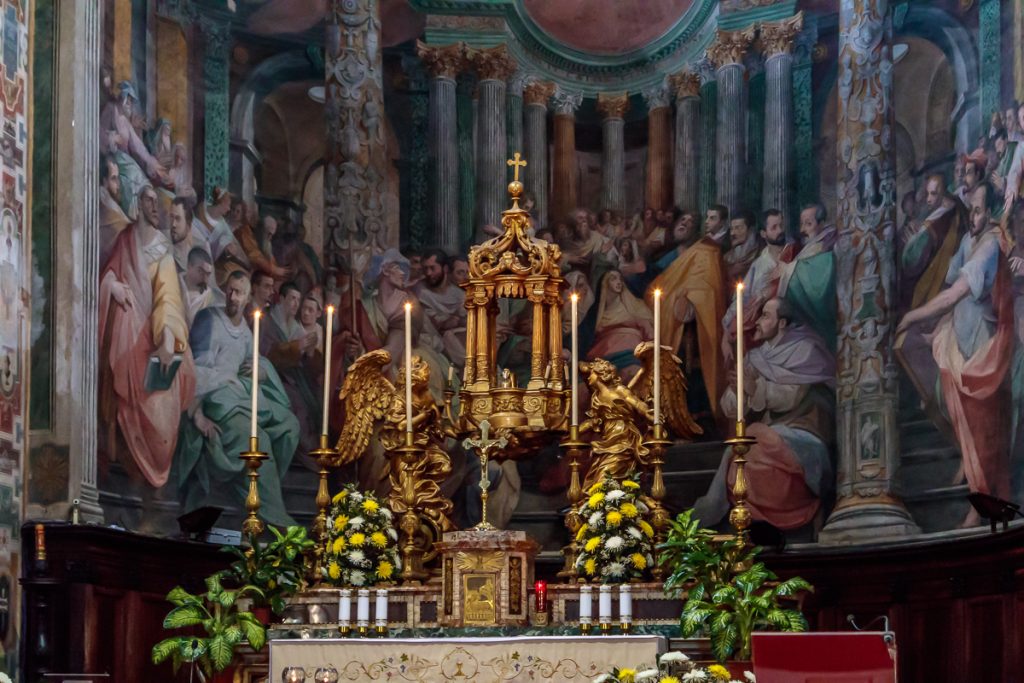 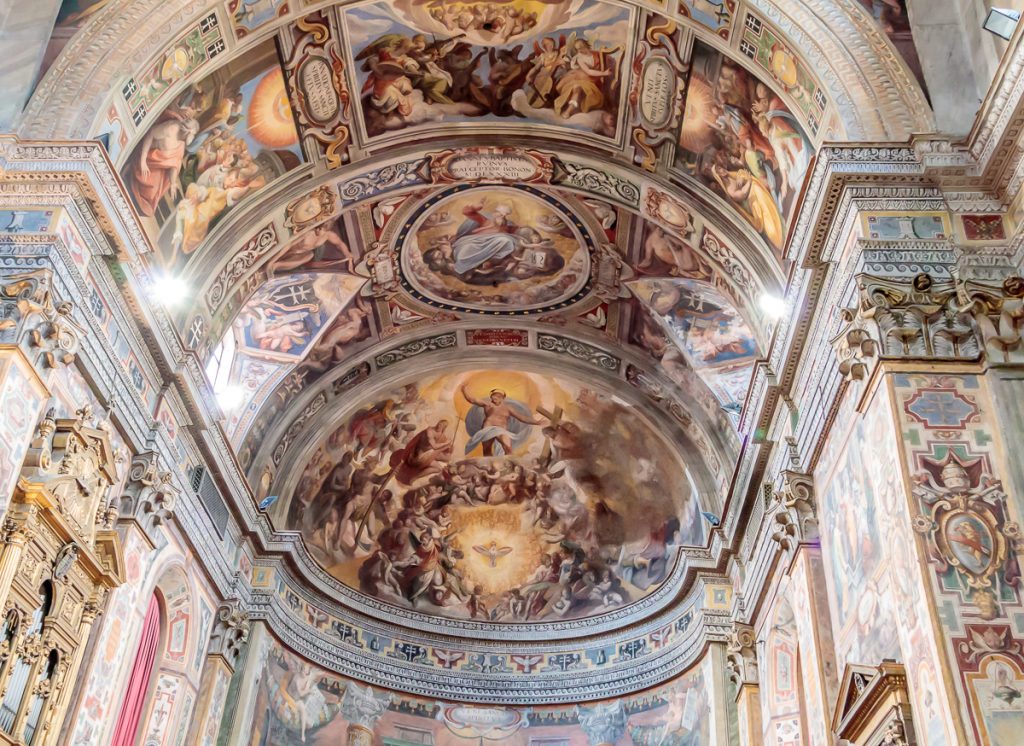 Ceiling in Santo Spirito in Sassia 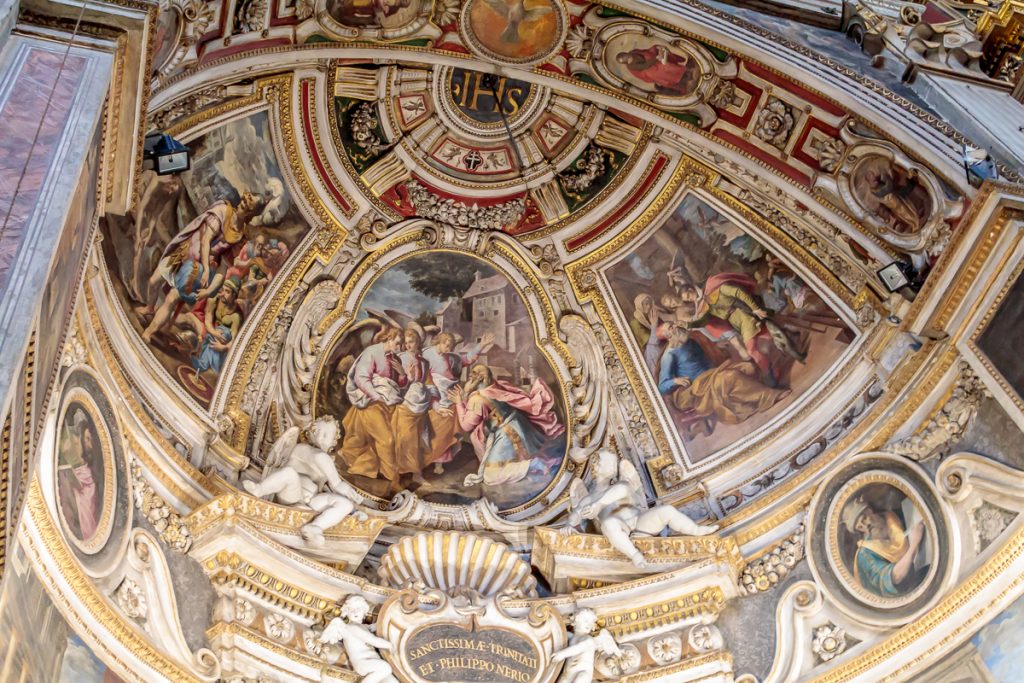 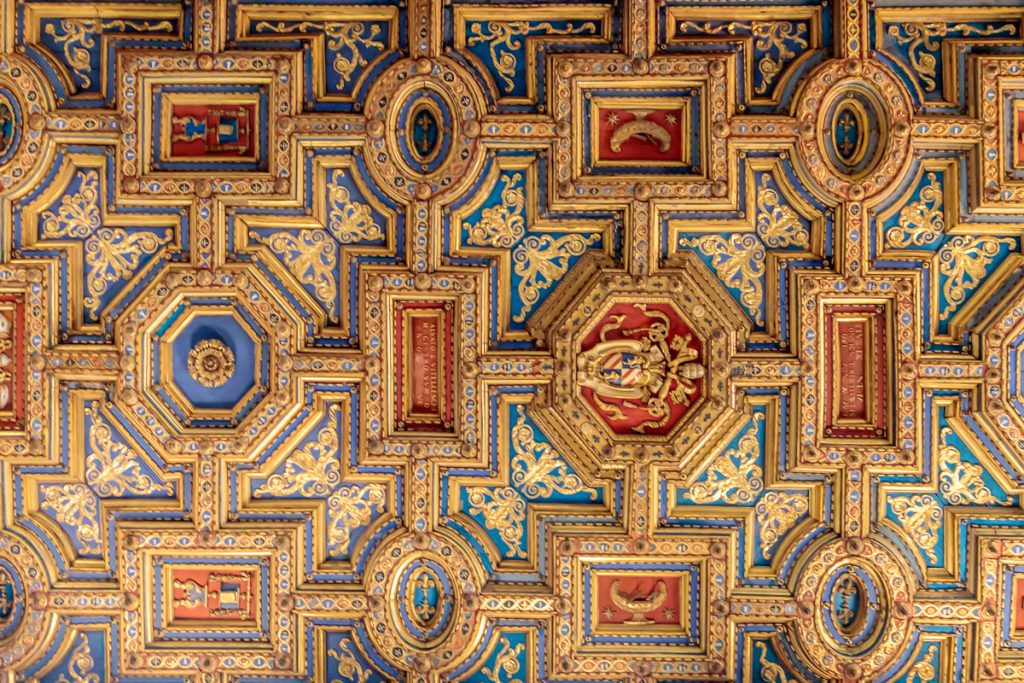 This church was built in Baroque style between 1626 and 1650 and functioned originally as the chapel of the adjacent Roman College.

The Roman College opened very humbly in 1551, with an inscription over the door summing up its simple purpose: “School of Grammar, Humanity, and Christian Doctrine. Free“. In 1560, Vittoria della Tolfa donated her family land, an entire city block and its existing buildings, to the Society of Jesus in memory of her late husband, founding the Roman College.

Although the Jesuits got the land, they did not get any money from her for completing the church. Budgetary restraints compelled them to hire their own architect. Construction of the church was taken over by the Jesuit architect Giovanni Tristano. Built entirely by Jesuit labor, the Church of the Annunciation was first used for worship in 1567.  The church is now named for St. Ingnatius of Loyola, the founder of the Society of Jesus, or better known as the Jesuits. 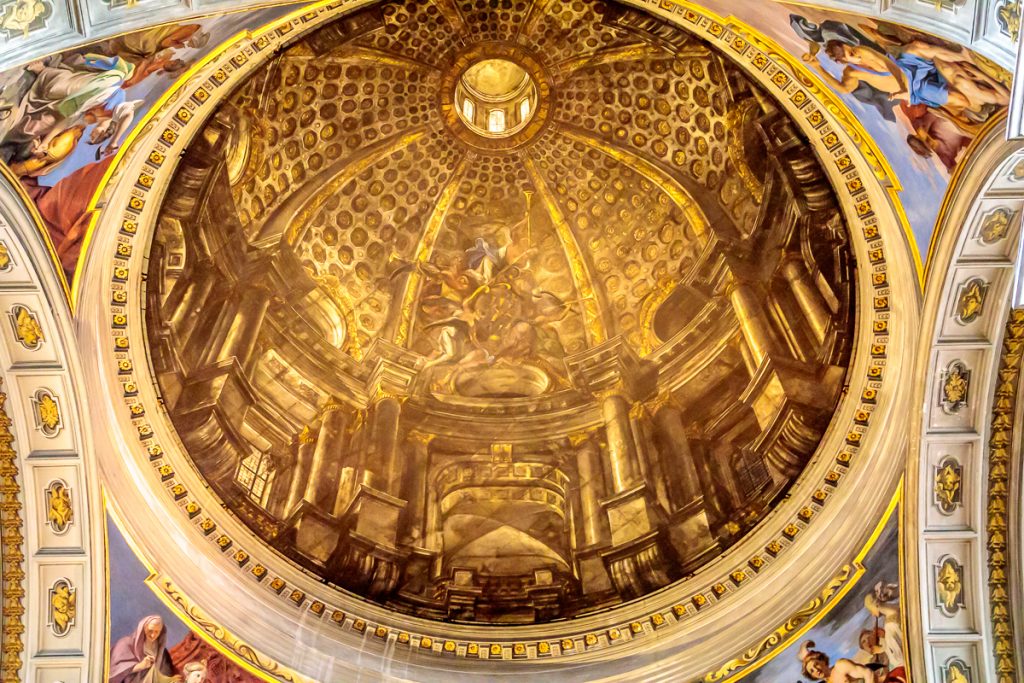 The ceiling shows scenes from the life of St. Ignatius. 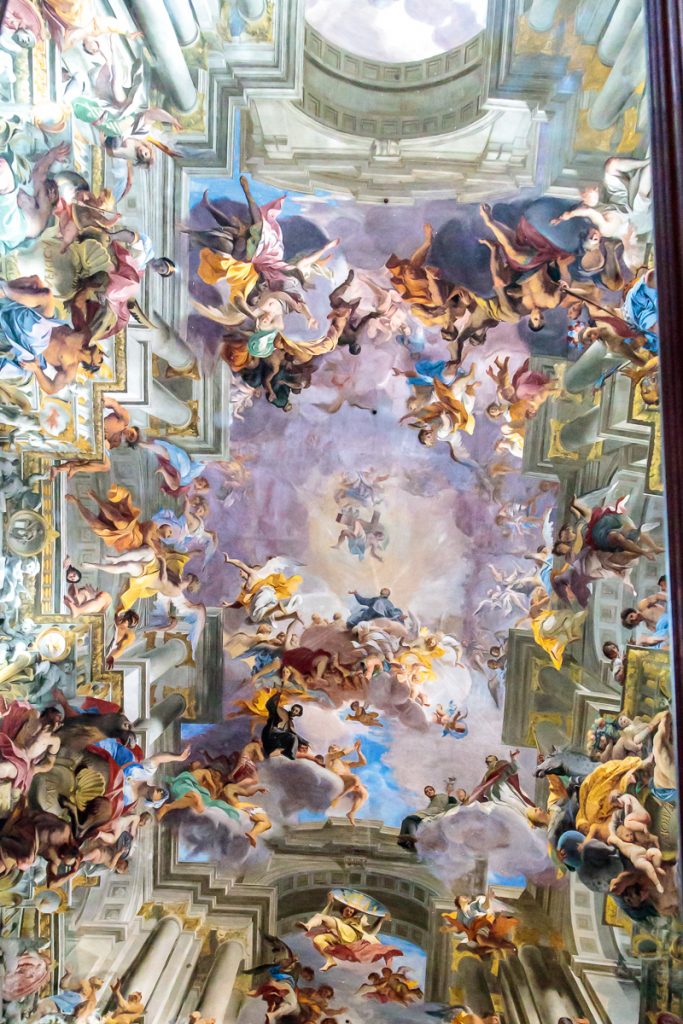 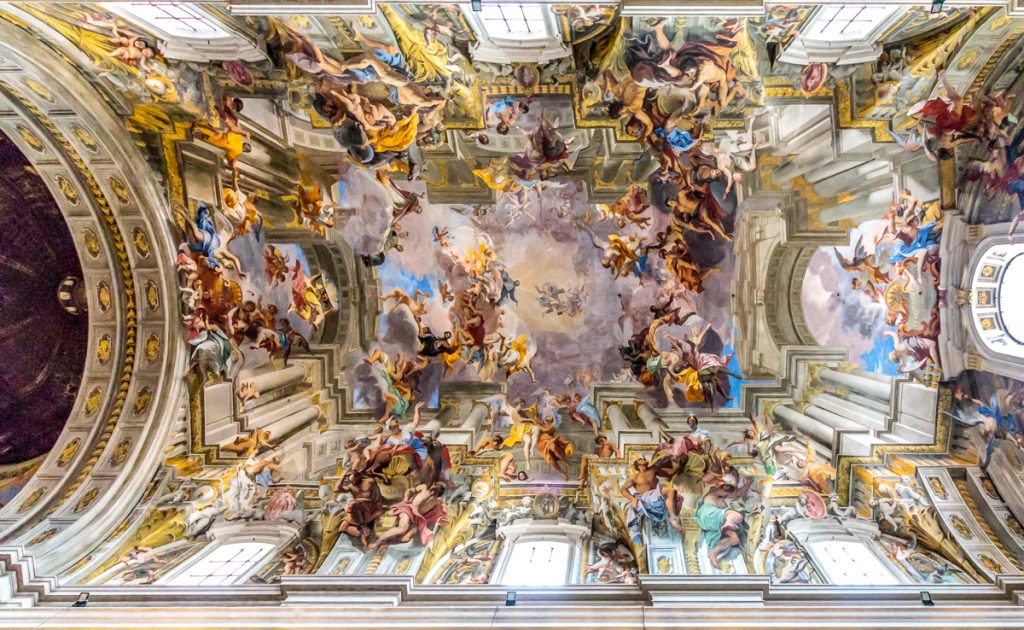 There was also a temporary art exhibit in the church when we were there entitled “To the Roots of Life”.  There were 8 copper sculptures of trees, a series by the artist Settimo Tamanini. 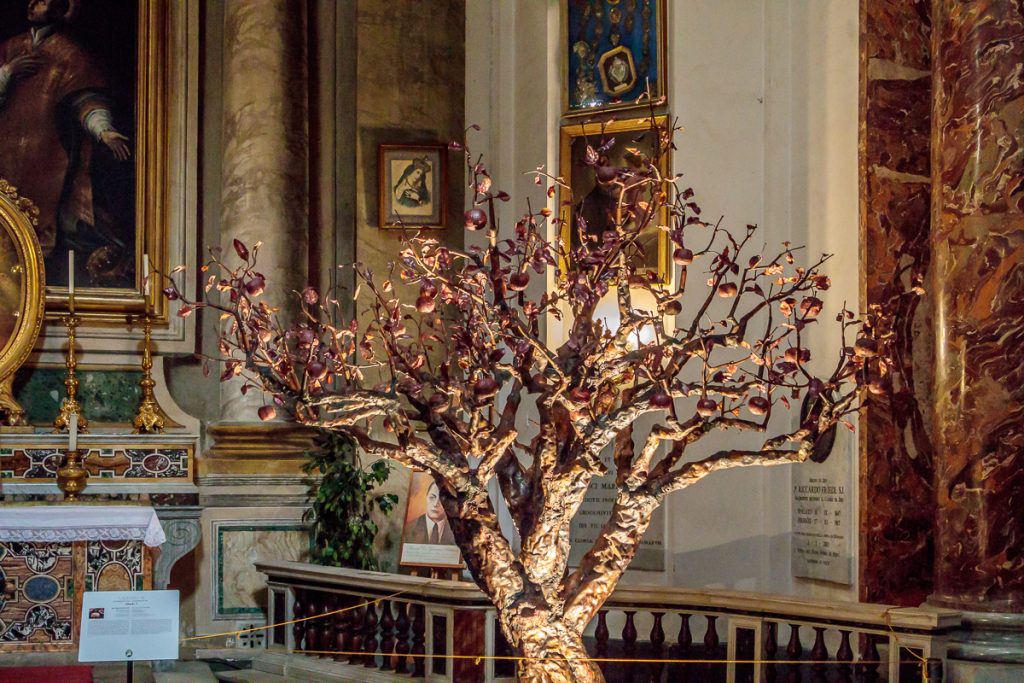 This church is dedicated to Pope Marcellus I (308-309).  Pope Adrian I, in the 8th century, built a church on the same place, which is currently under this modern church.  Under the main altar, decorated with 12th century opus sectile (cut work), are the relics of several saints, which include those of Pope Marcellus as well as Digna and Emerita. 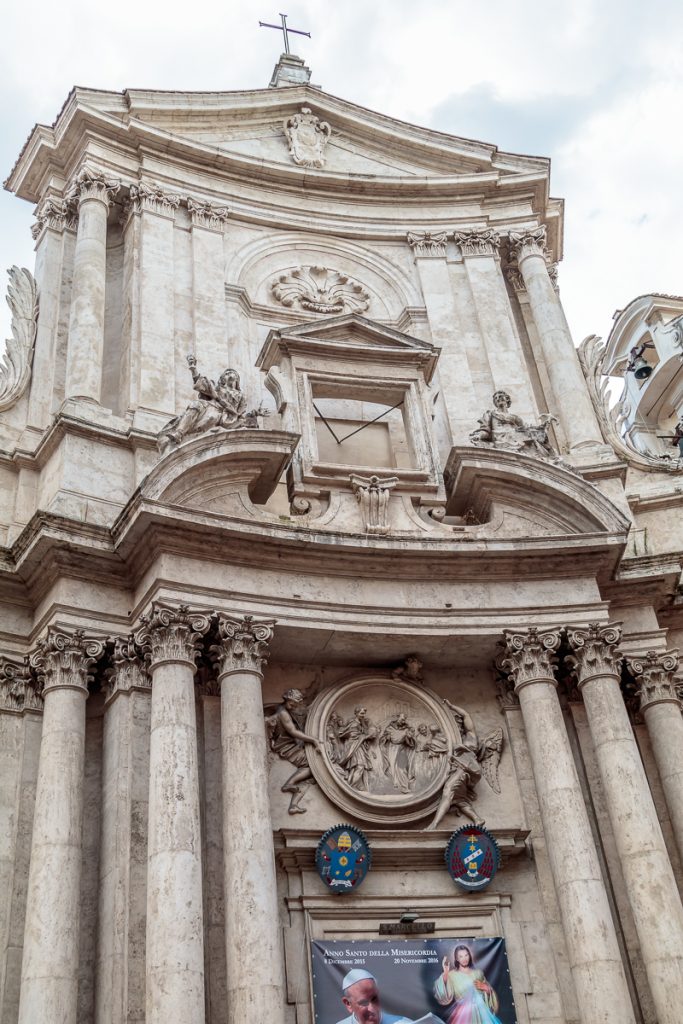 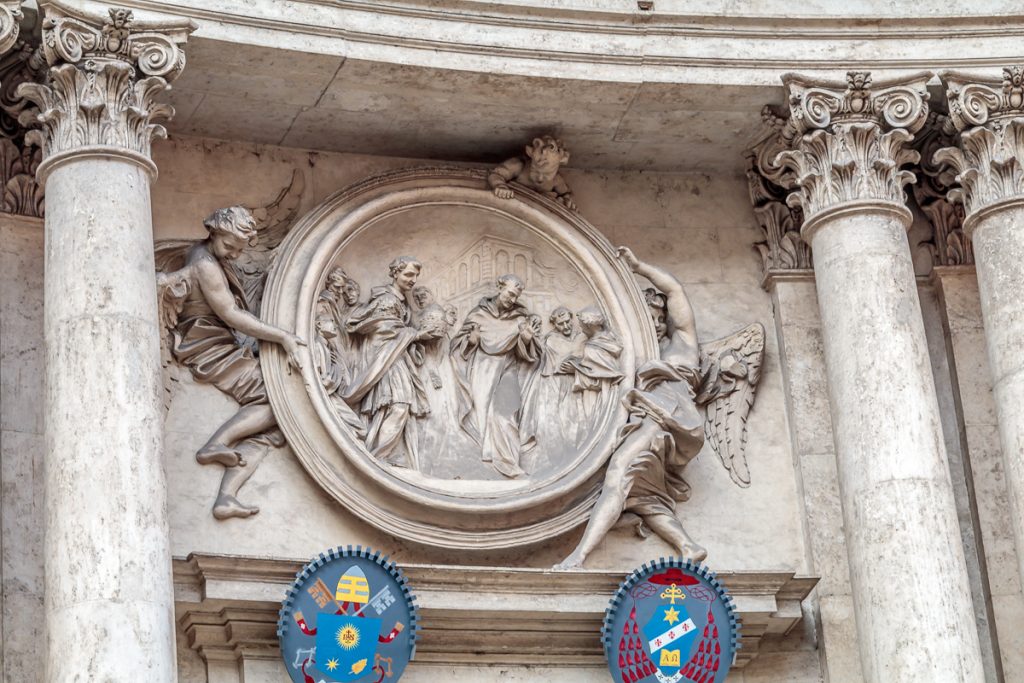 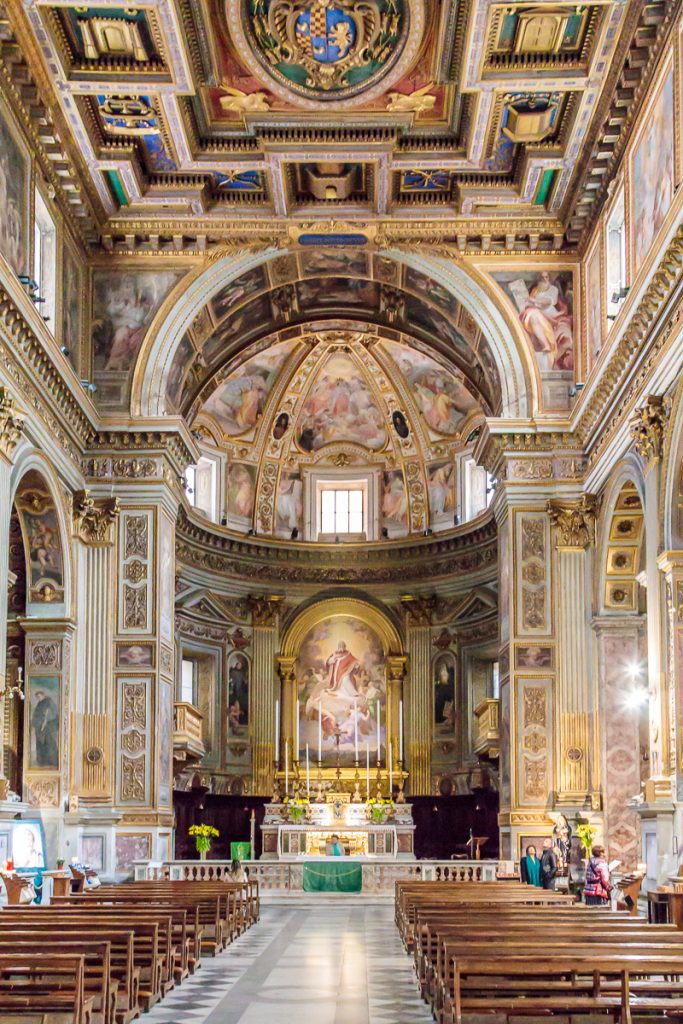 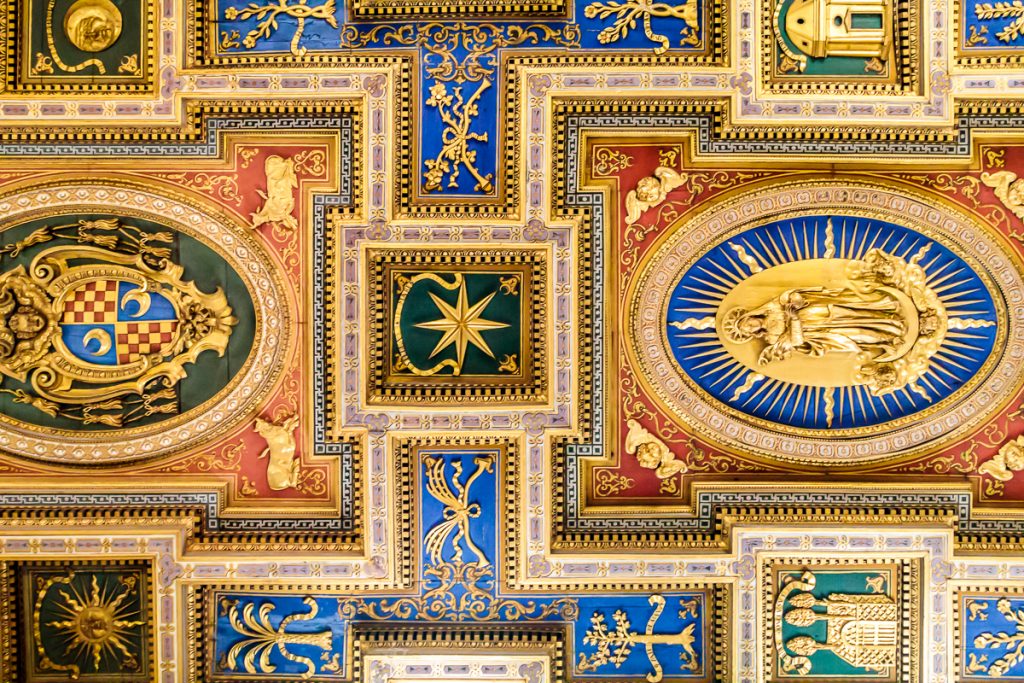 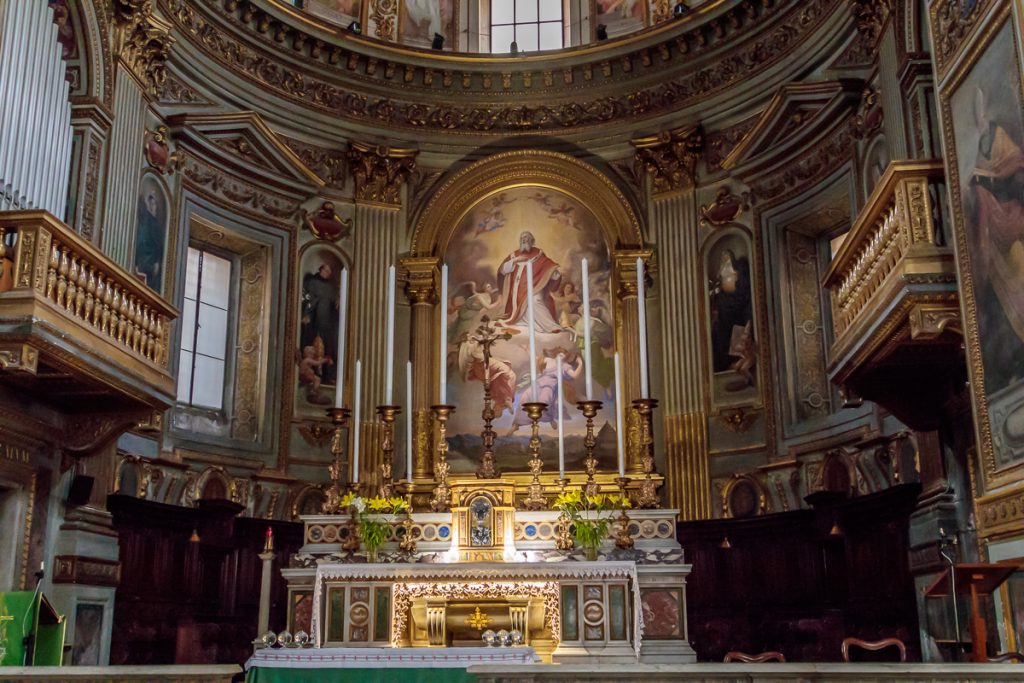 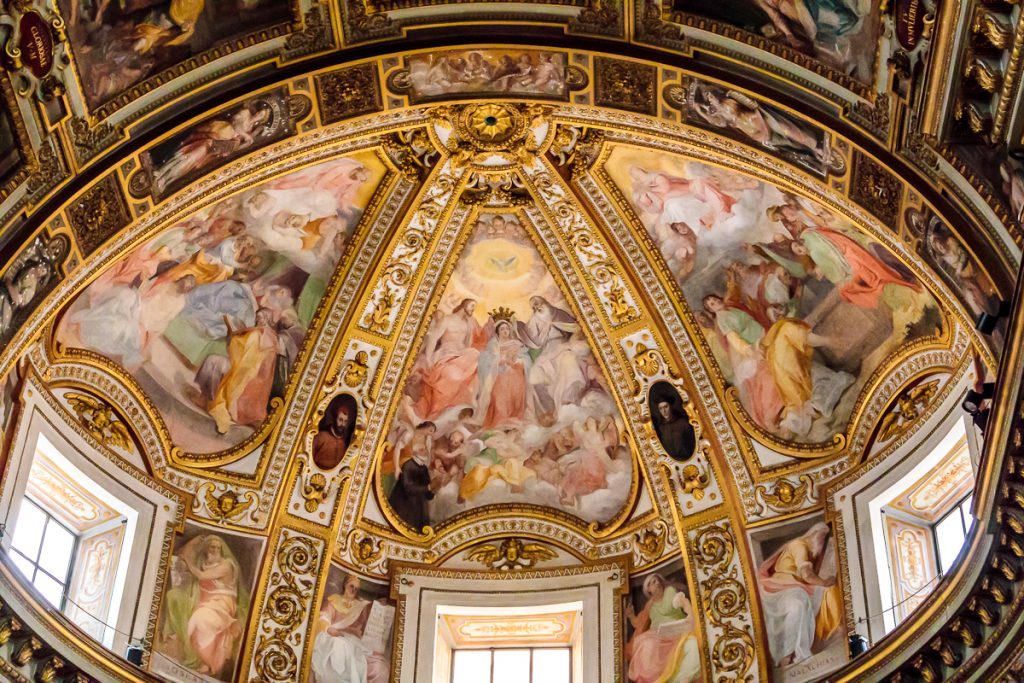 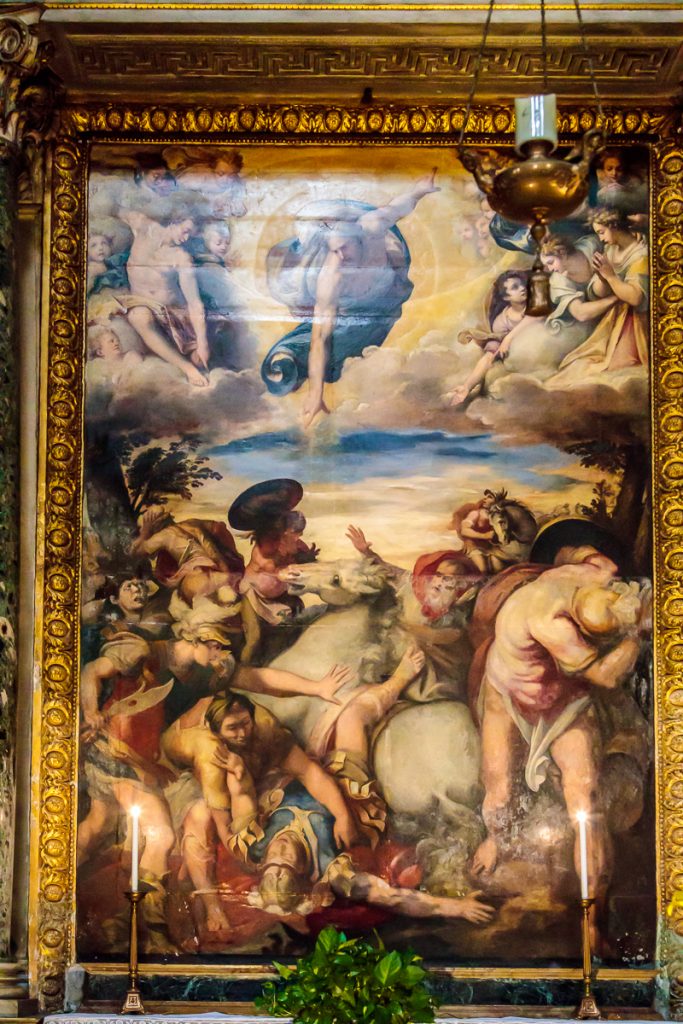 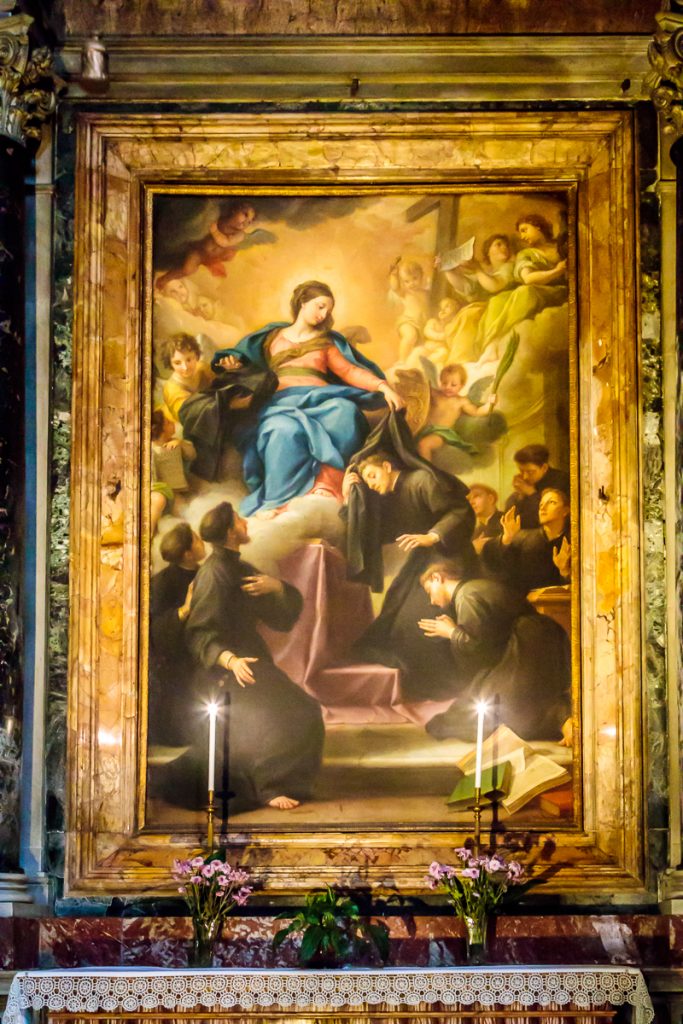 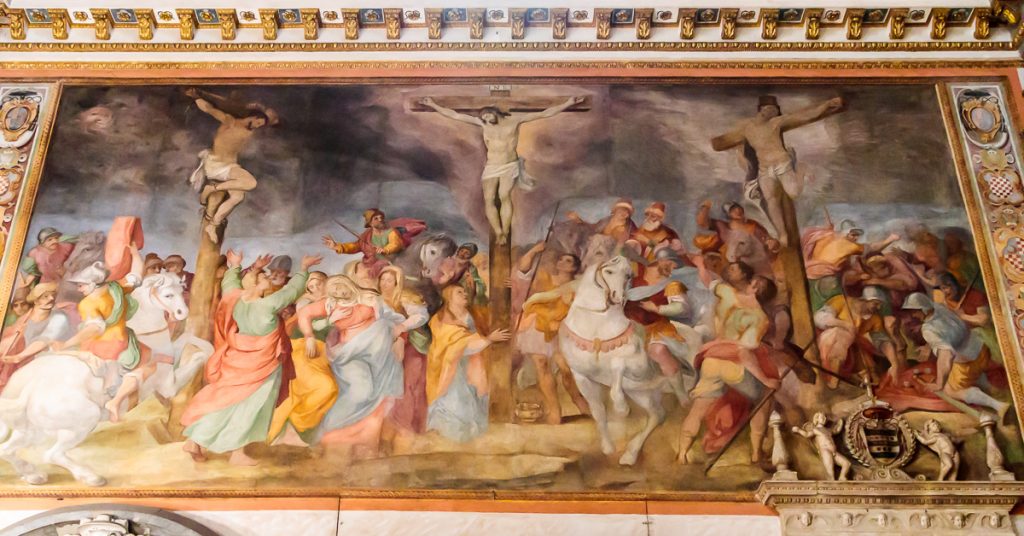 This wooden, painted Pieta dates to about 1700. 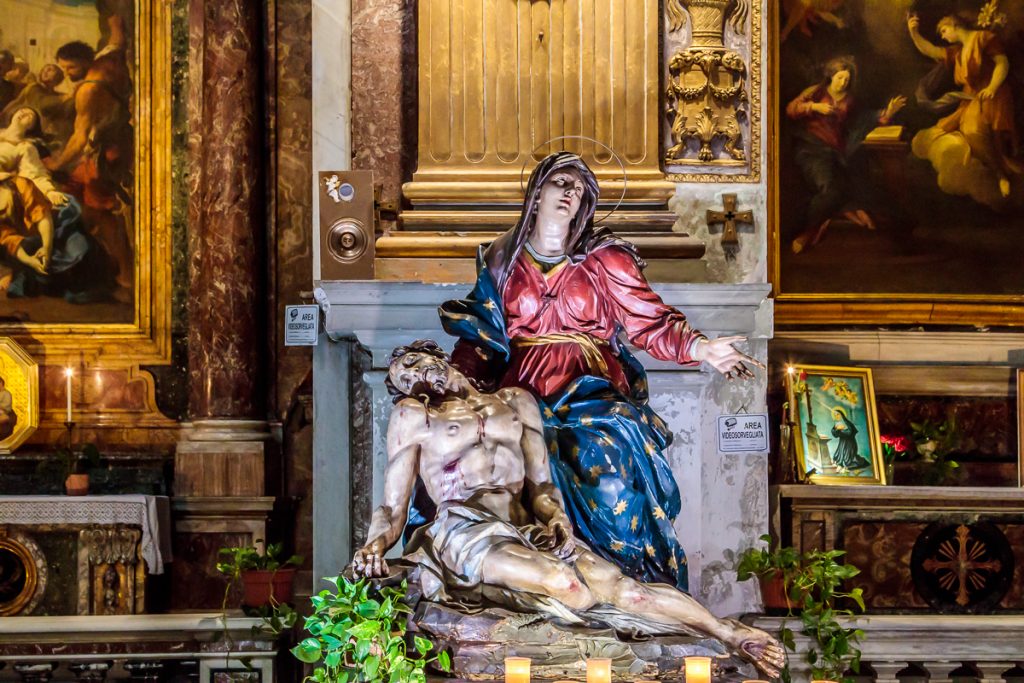 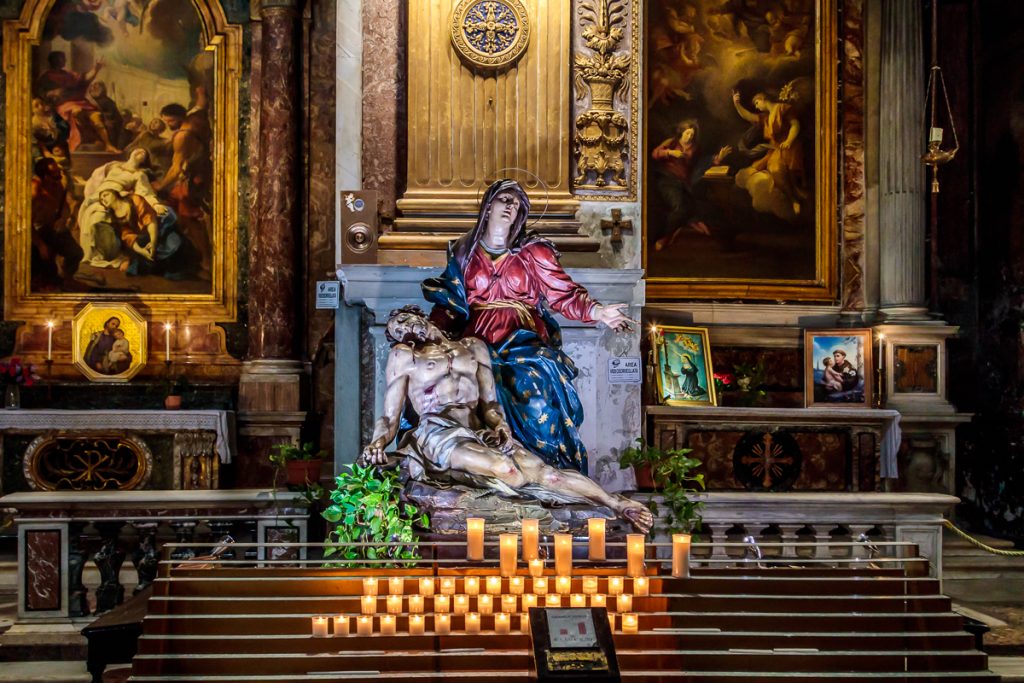 So, the rule of thumb is, Every church in Rome is beautiful.  Well, at least that’s been my limited experience.  So, if you are in Rome, or anywhere in Italy, and pass by a church, stop inside.  You might be pleasantly surprised.