The Pantheon from the Greek word Pantheion, (“pan” meaning “all” and “theion” meaning “of or sacred to a god”, thus meaning “[temple] of every god”) is a former Roman temple, now a Catholic church on the site of an earlier temple commissioned by Marcus Agrippa during the reign of Augustus (27 BC – 14 AD). The present building was completed by the emperor Hadrian and probably dedicated about 126 AD. 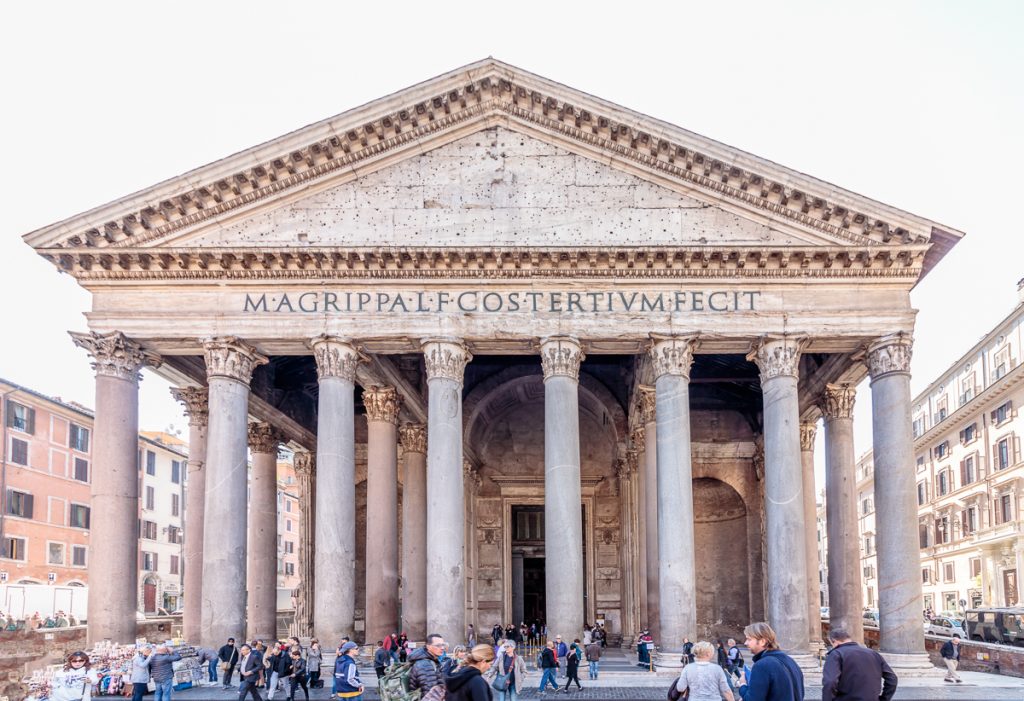 The building is circular, a rotunda which is under a coffered concrete dome, with a central opening (oculus) to the sky. The concrete for the dome was poured in moulds, probably mounted on temporary scaffolding. The oculus is the main source of natural light. 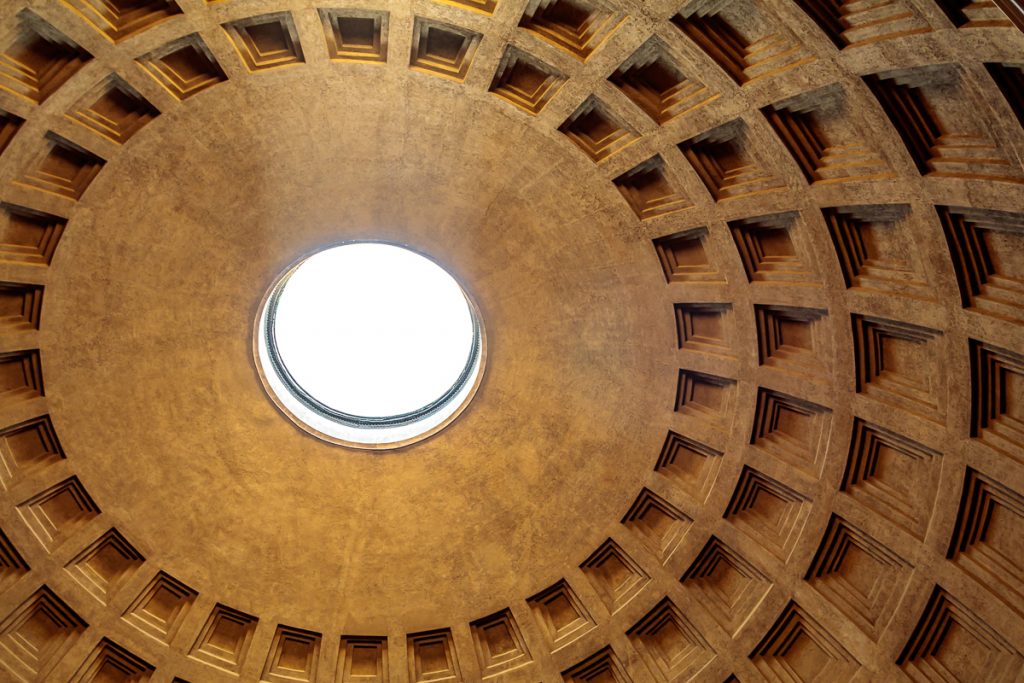 The dome is made of 5,000 tons of Roman concrete.  Roman concrete is durable due to its incorporation of volcanic ash, which prevents cracks from spreading. The thickness of the dome varies from 21 feet at the base of the dome to 3.9 feet around the oculus. The material used in the concrete of the dome also varies. At its thickest point, the aggregate is travertine, then terracotta tiles, then at the very top, tufa and pumice, both porous light stones. At the very top, where the dome would be at its weakest and vulnerable to collapse, the oculus actually lightens the load.

Almost two thousand years after it was built, the Pantheon’s dome is still the world’s largest unreinforced concrete dome. The height to the oculus and the diameter of the interior circle are the same, 142 feet. 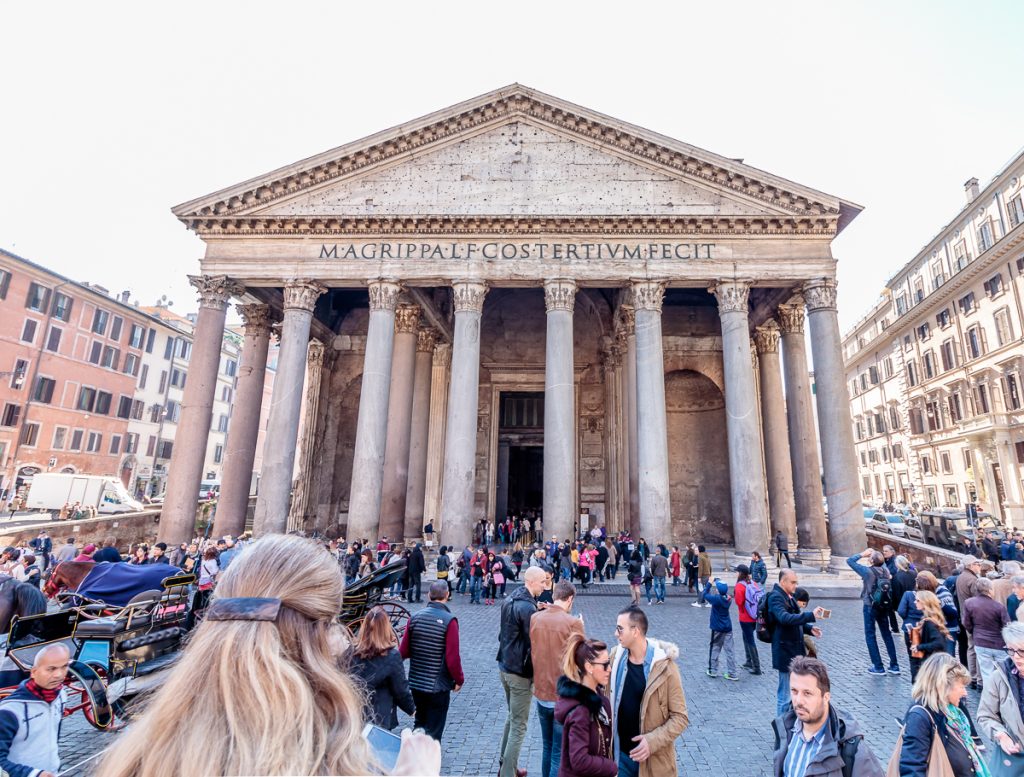 Portico of the Pantheon

The inscription on the front of the temple reads “M·AGRIPPA·L·F·COS·TERTIVM·FECIT”, a shortened version of “M[arcus] Agrippa L[ucii] f[ilius] co[n]s[ul] tertium fecit,” meaning “Marcus Agrippa, son of Lucius, made [this building] when consul for the third time.” However, archaeological excavations have shown that the Pantheon of Agrippa had been completely destroyed except for this façade. It is thought  that the present construction began in 114, under Trajan, four years after it was destroyed by fire for the second time. 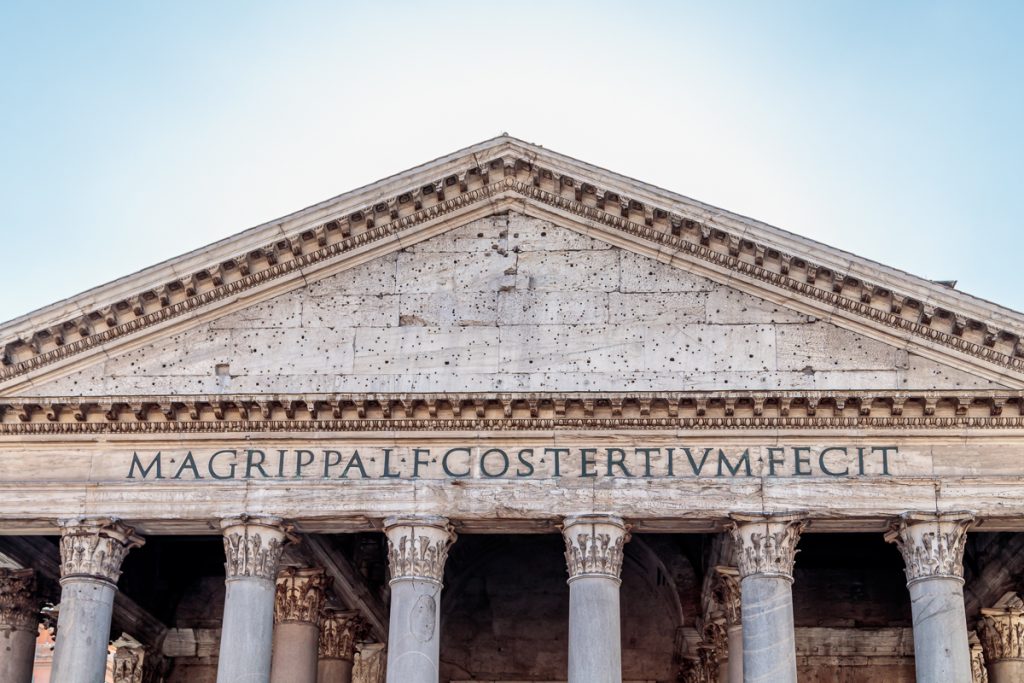 The interior contains many niches and chapels with some amazing art work, some shown below. 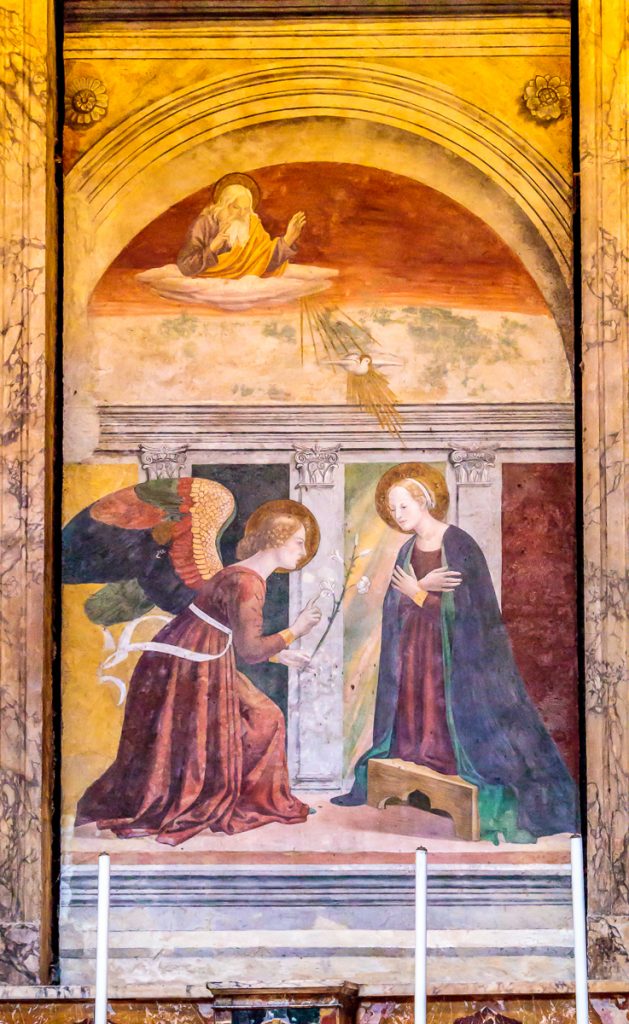 The Annunciation by Melozzo da Forlì

Here is the tomb of King Victor Emmanuel II (died 1878). It was originally dedicated to the Holy Spirit. The tomb consists of a large bronze plaque surmounted by a Roman eagle and the arms of the house of Savoy. 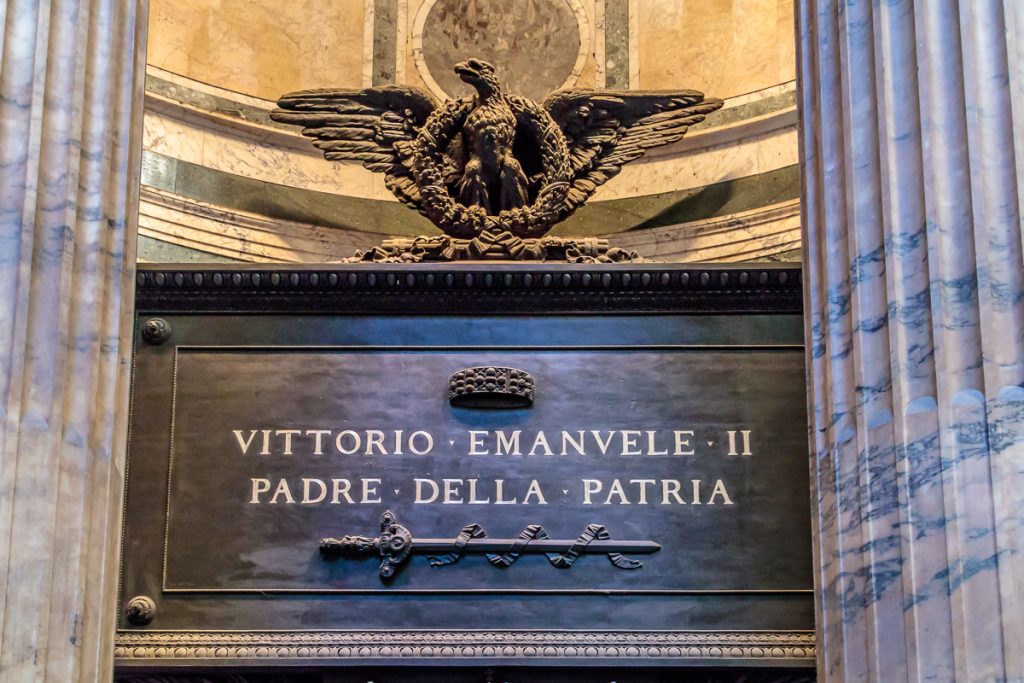 This sculpture by Il Lorenzone is of St Anne and the Blessed Virgin. 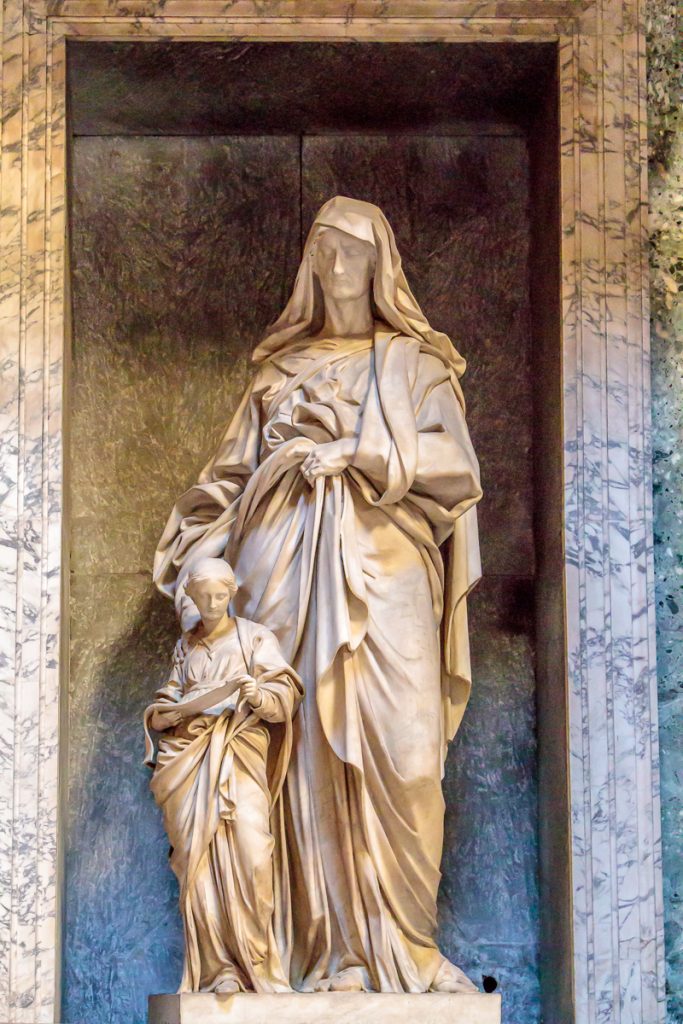 St. Anne and the Blessed Virgin by Il Lorenzone

This is a 15th-century painting of the Umbrian school, The Madonna of Mercy between St Francis and St John the Baptist. 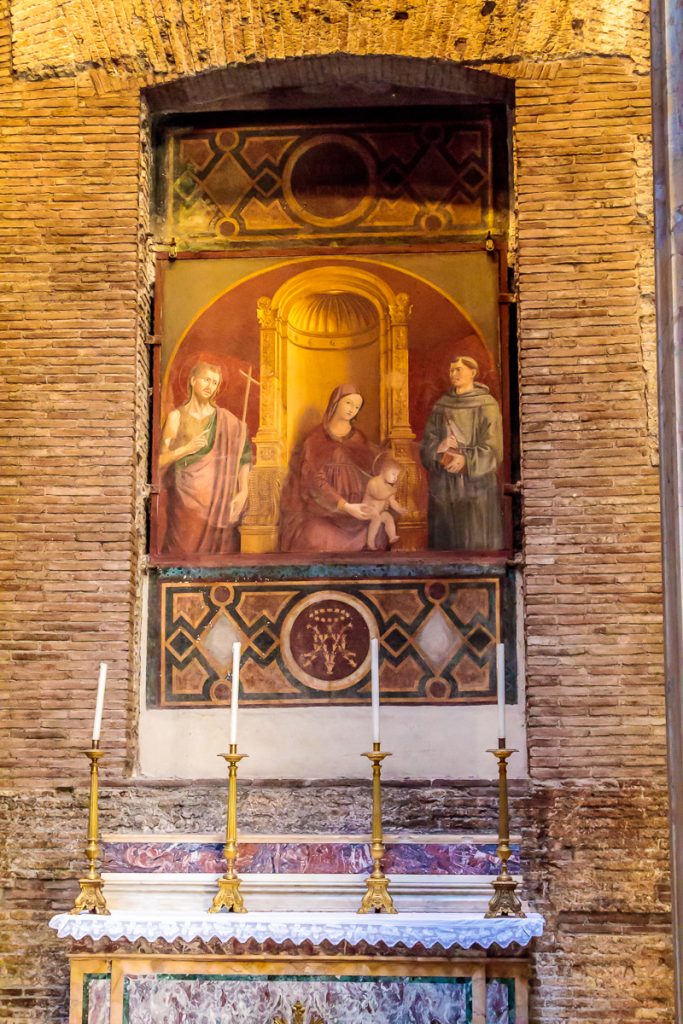 The Madonna of Mercy Between St. Francis and St. John the Baptist

The present high altar and the apse were commissioned by Pope Clement XI (1700–1721) and designed by Alessandro Specchi. Enshrined on the apse above the high altar is a 7th-century Byzantine icon of the Virgin and Child, given by Phocas, the Byzantine Emperor from 602 to 610, to Pope Boniface IV (608-615) on the occasion of the dedication of the Pantheon for Christian worship on 13 May 609. 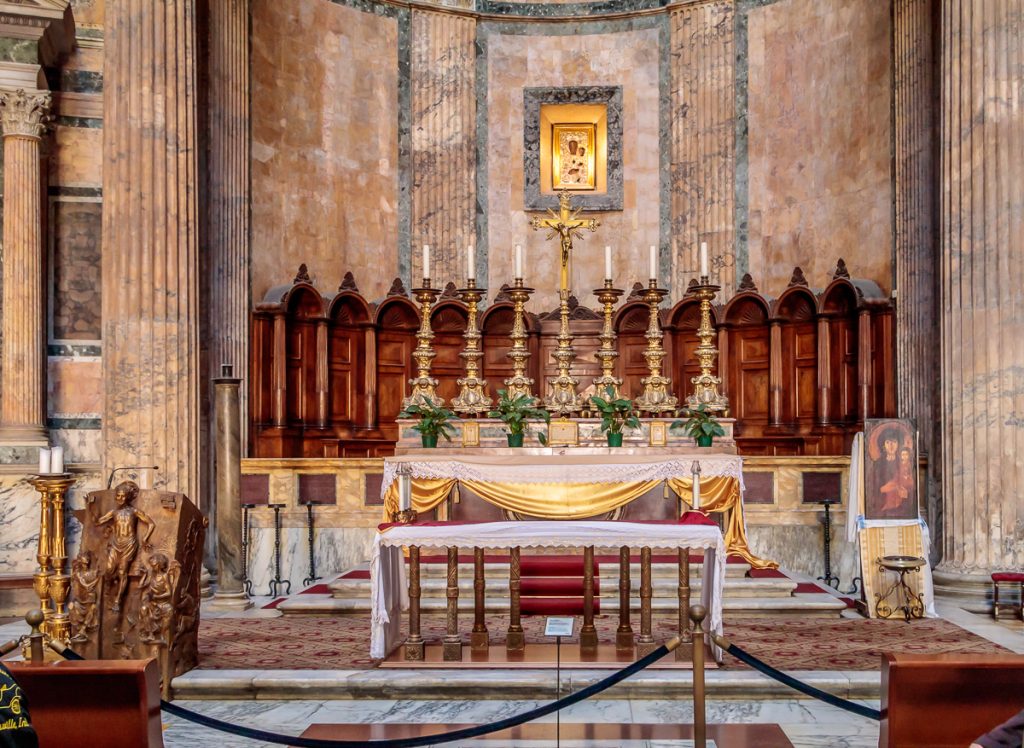 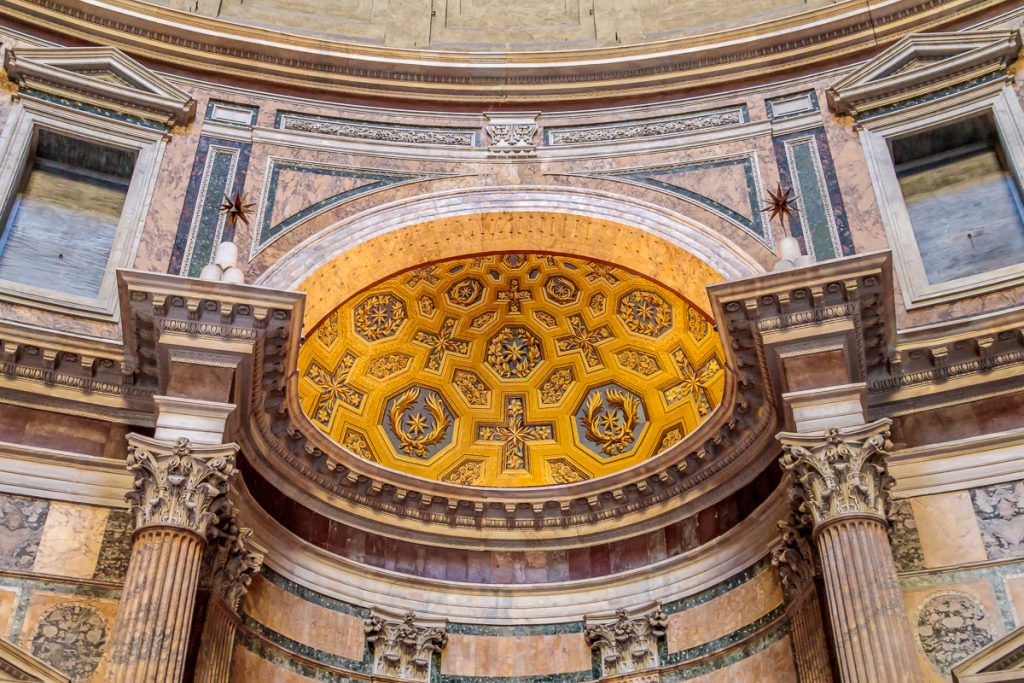 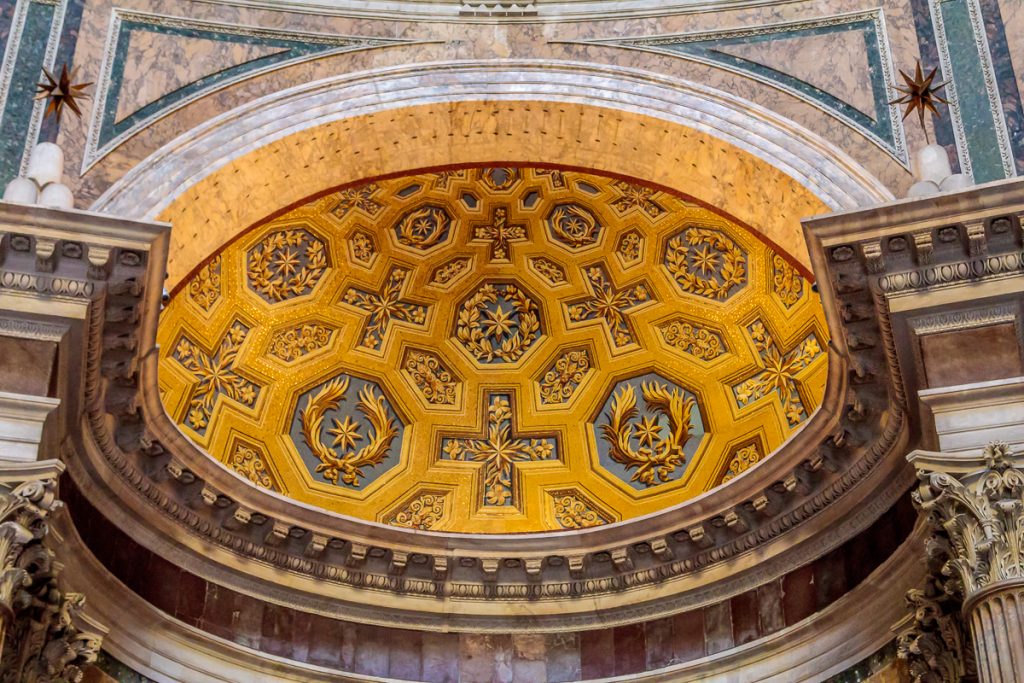 In the Chapel of the Crucifixion, the Roman brick wall is visible in the niches. The wooden crucifix on the altar is from the 15th century. 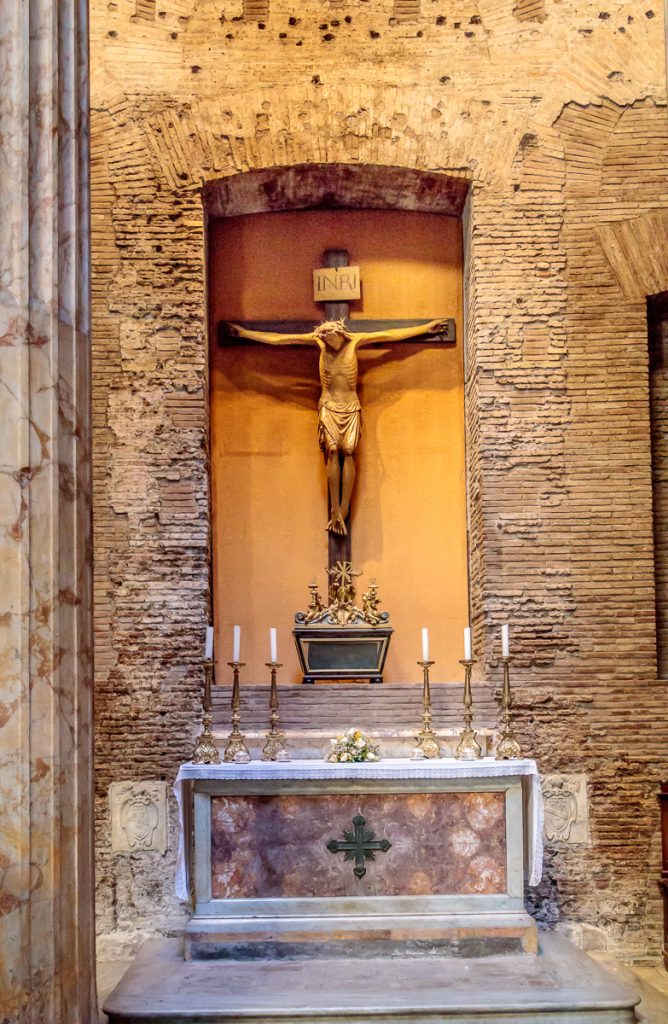 Chapel of the Crucifixion 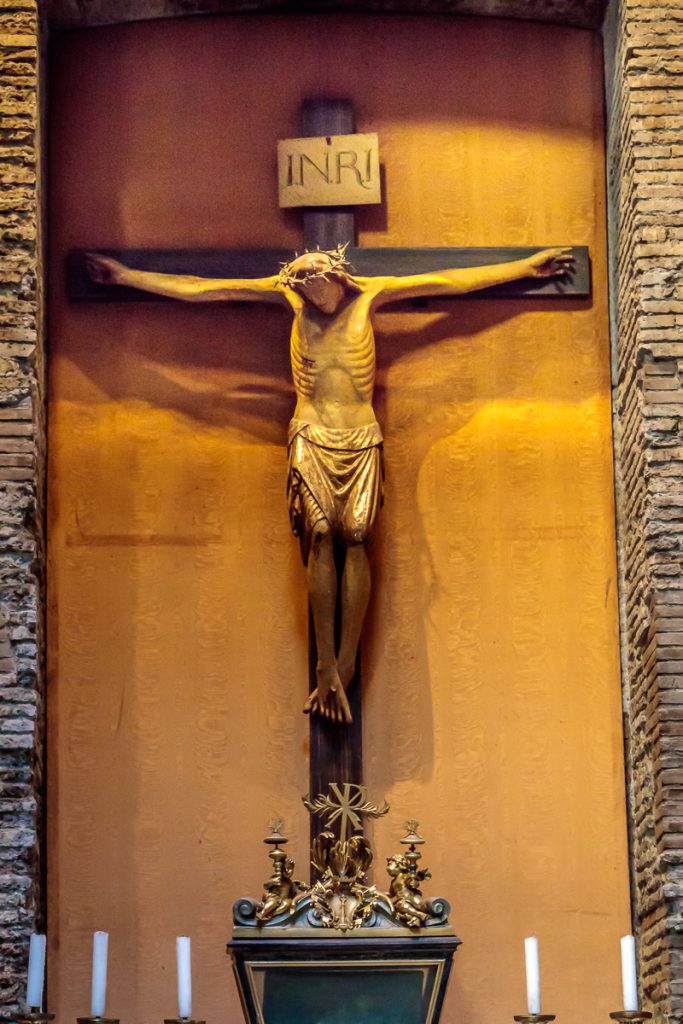 This niche holds the mortal remains – his Ossa et cineres, “Bones and ashes”, as the inscription on the sarcophagus says – of the great artist Raphael. His fiancée, Maria Bibbiena is buried to the right of his sarcophagus; she died before they could marry. The sarcophagus was given by Pope Gregory XVI, and its inscription reads ILLE HIC EST RAPHAEL TIMUIT QUO SOSPITE VINCI / RERUM MAGNA PARENS ET MORIENTE MORI, meaning “Here lies Raphael, by whom the mother of all things (Nature) feared to be overcome while he was living, and while he was dying, herself to die”. 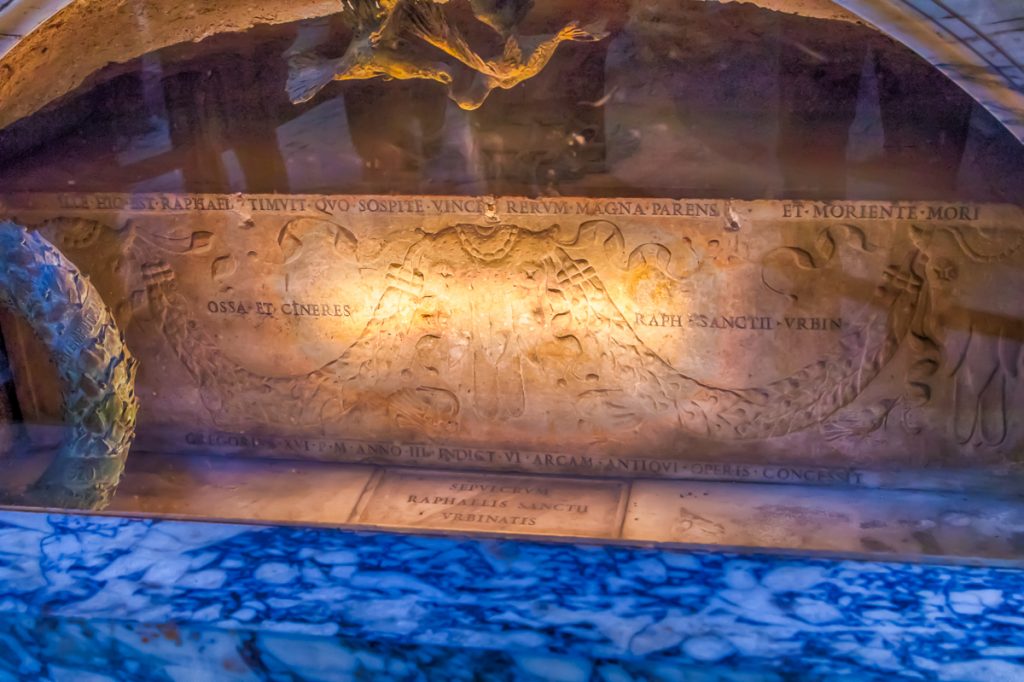 The tomb of King Umberto I and his wife Margherita di Savoia. The chapel was originally dedicated to St Michael the Archangel, and then to St. Thomas the Apostle. 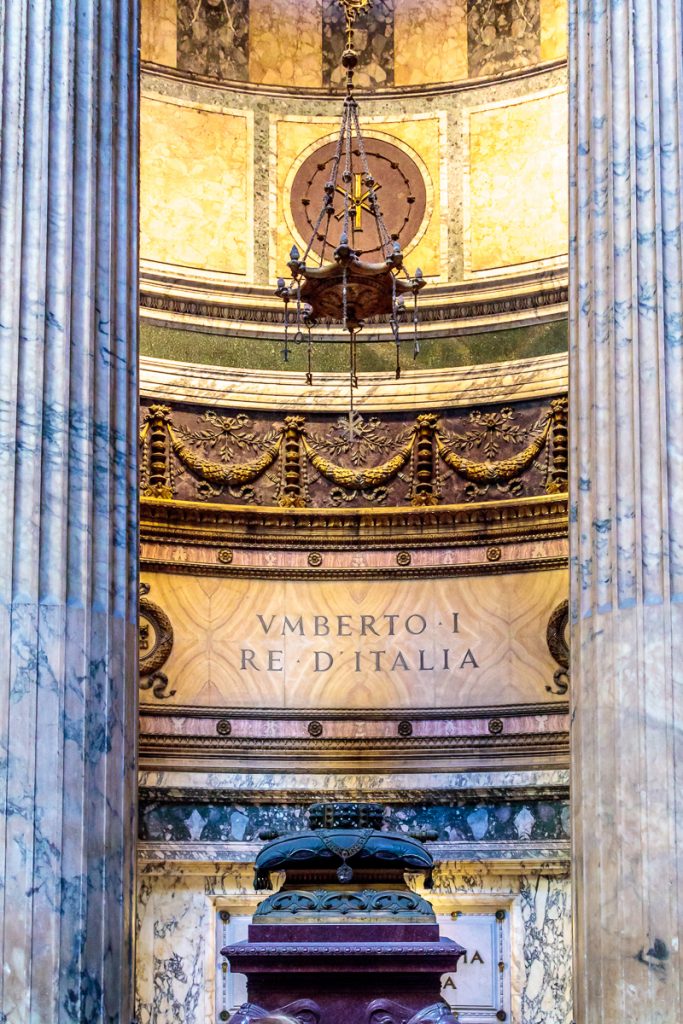 Tomb of King Umberto I 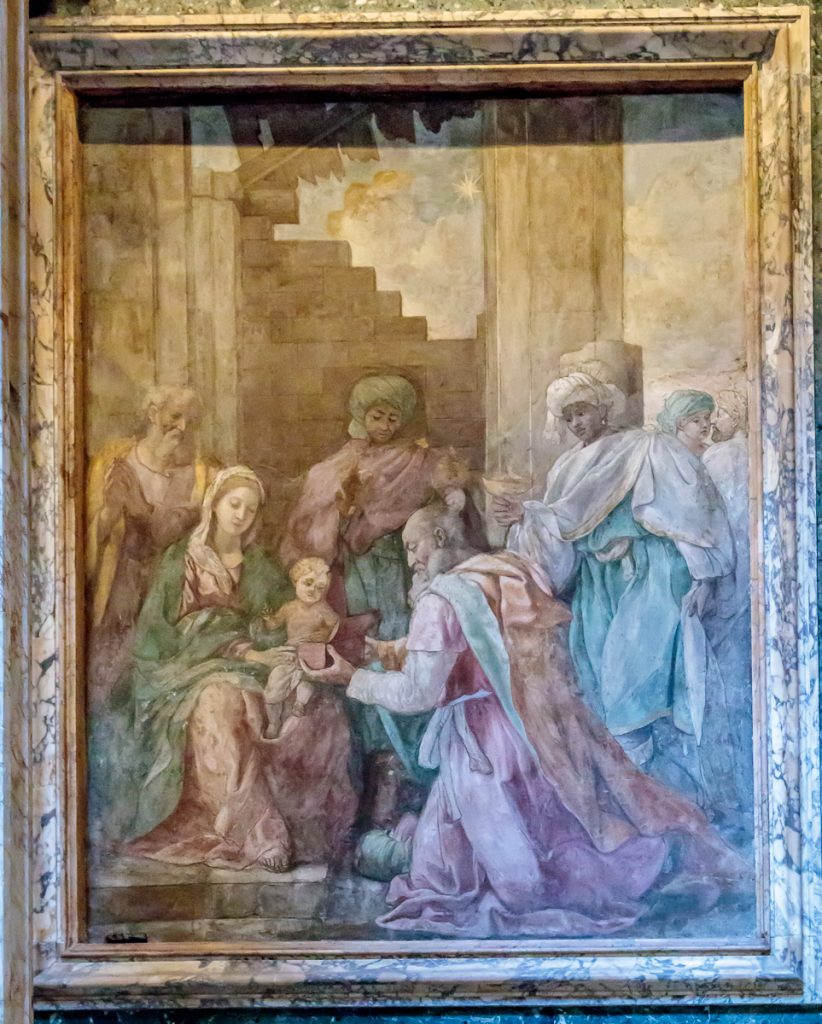 Adoration of the Magi by Francesco Cozza 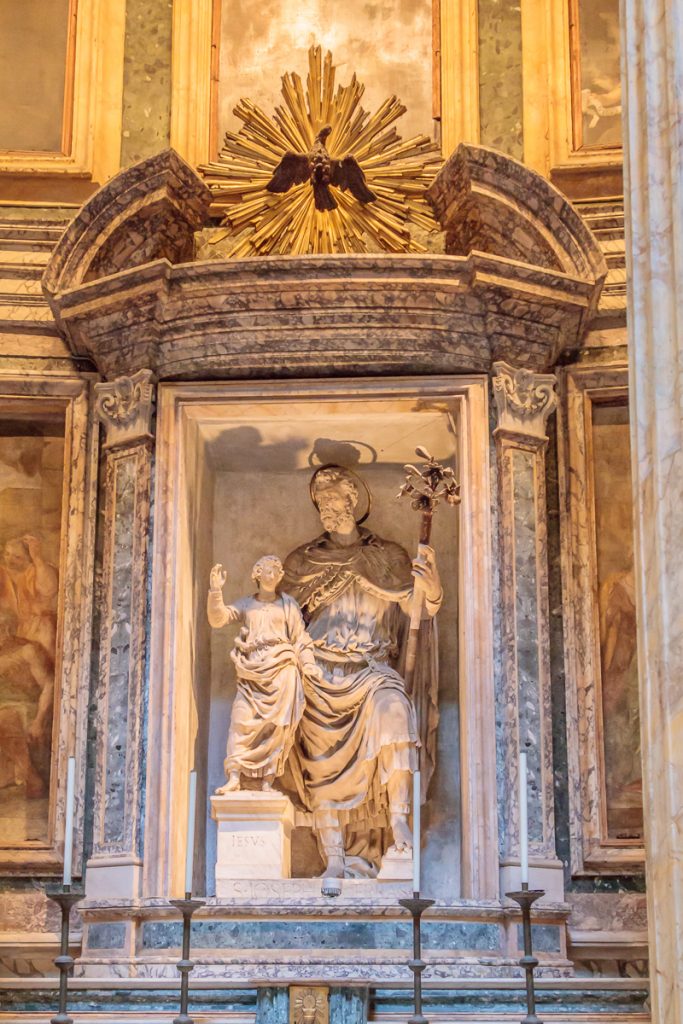 Chapel of St. Joseph in the Holy Land

There are also some pieces that I could not identify. 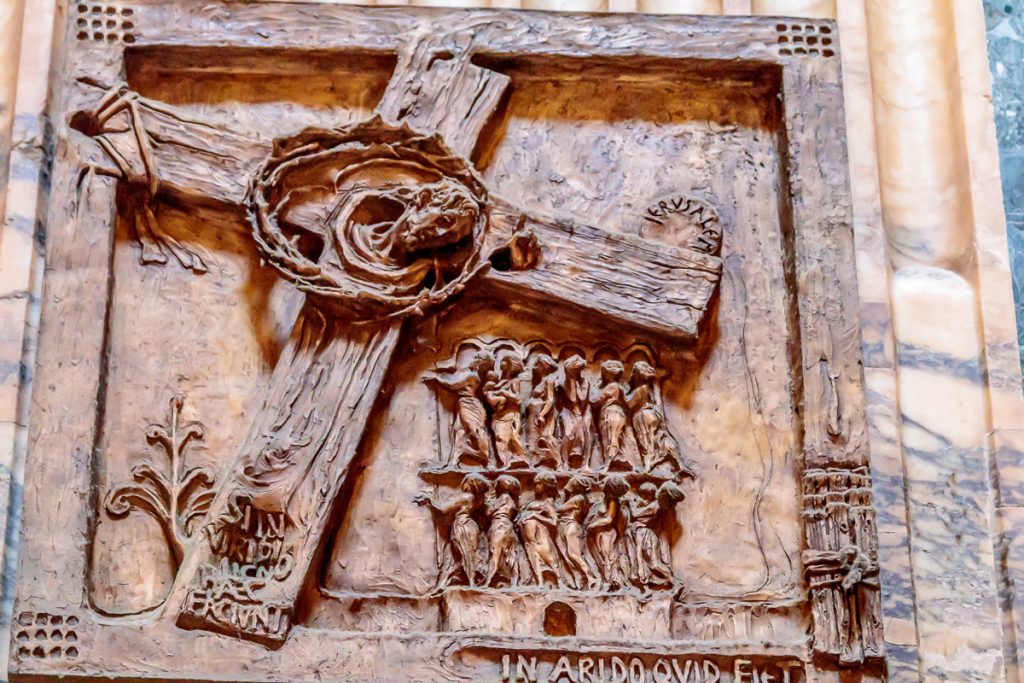 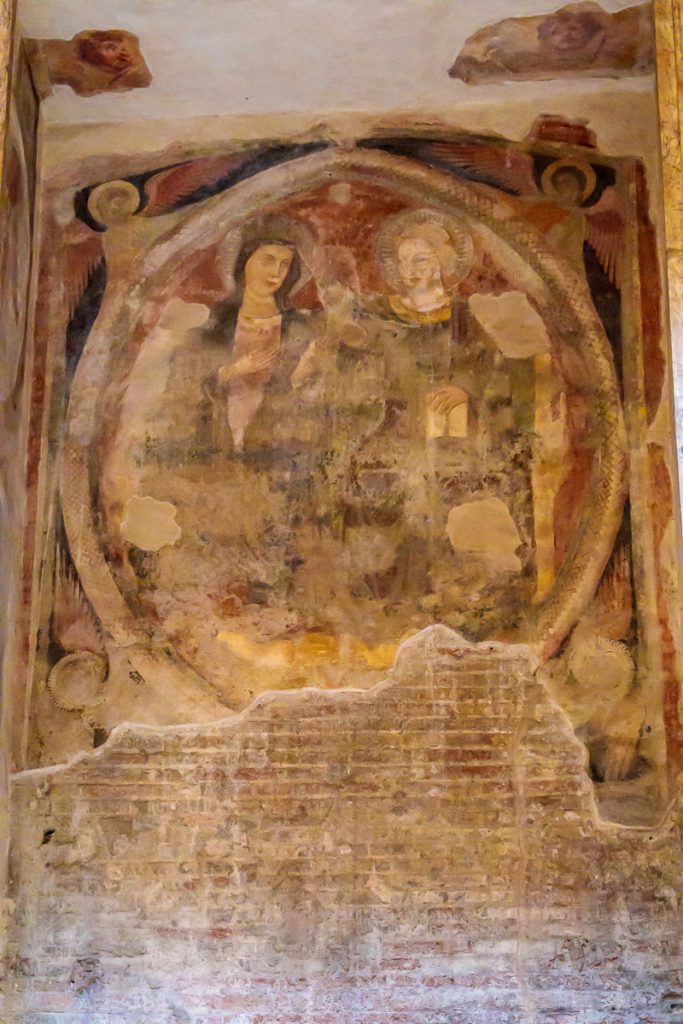 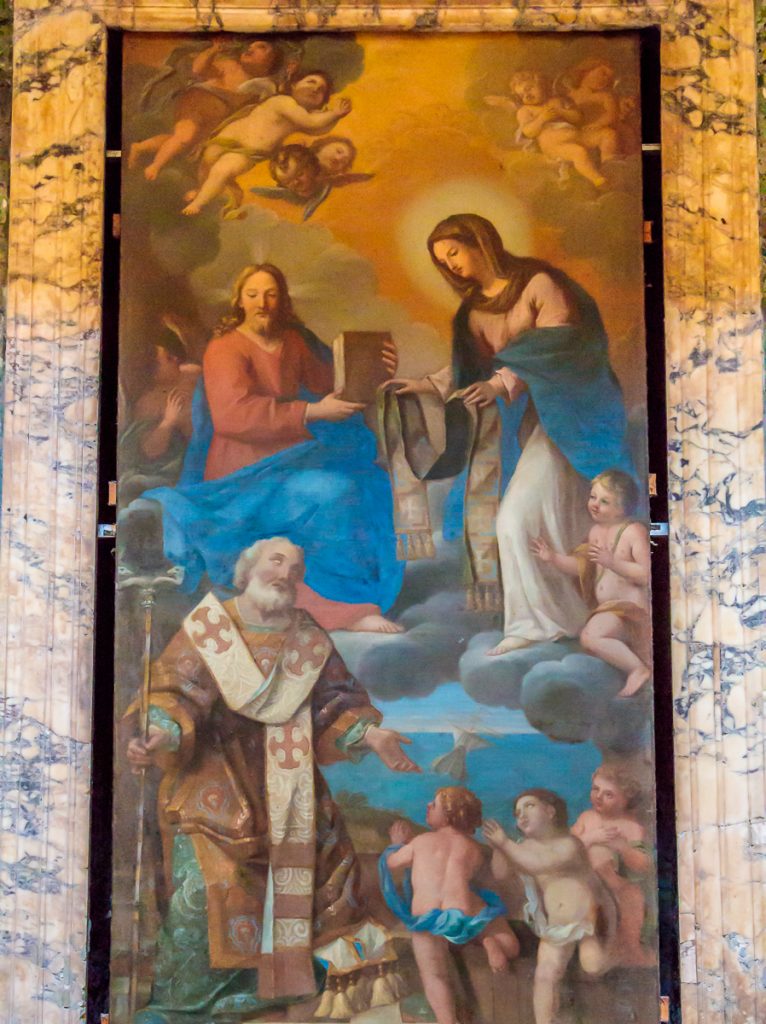 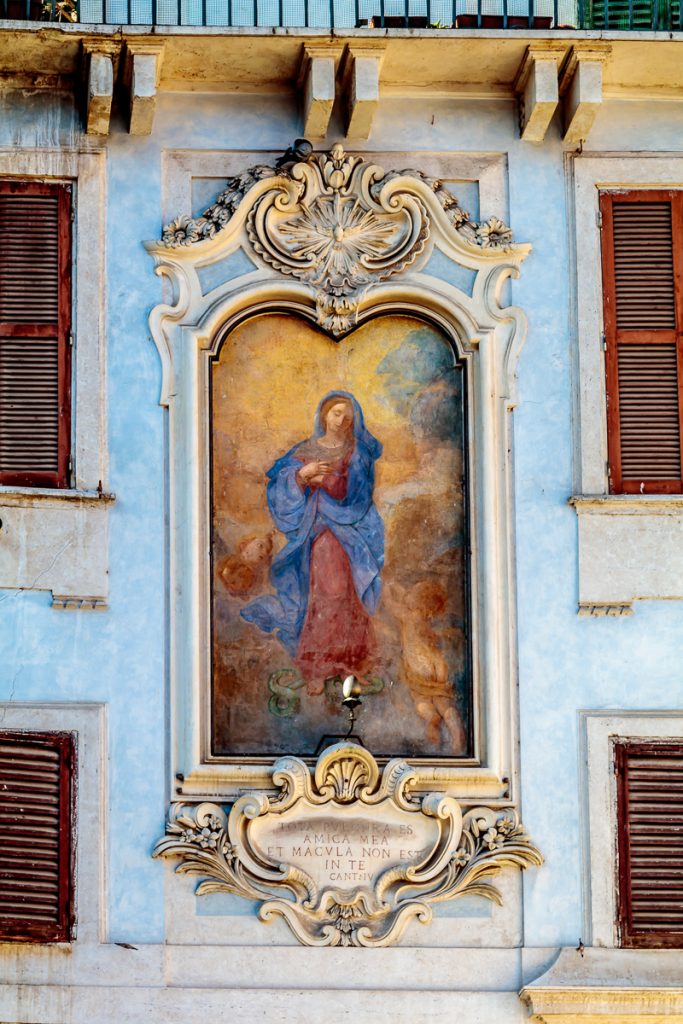 Painting of Mary Outside the Pantheon

So, here we have a building that dates back to the 2nd century that has had a history both pagan and sacred.  It serves today as an active Catholic church and can be reserved for weddings if so desired.  However, if you decide to get married here, be aware that the oculus is open to the weather.  The floor was wet when we arrived after a rain.  I’d hate to see you get your wedding dress wet.

Again, all details from WikiPedia.

This entry was posted in Travel and tagged Italy, Pantheon, Rome.