The Colosseum is one of the most recognized and visited sites in Rome.

The Colosseum is the largest Amphitheatre ever built.  Construction began under the emperor Vespasian in AD 72, and was completed in AD 80 under his successor and heir Titus.  An estimated 100,000 Jewish prisoners were brought back to Rome after the Great Jewish Revolt in 70 AD which led to the Siege of Jerusalem and many contributed to the massive workforce needed for construction. The slaves undertook manual labor such as working in the quarries at Tivoli where the travertine (a type of limestone) was quarried, along with lifting and transporting the quarried stones 20 miles from Tivoli to Rome. 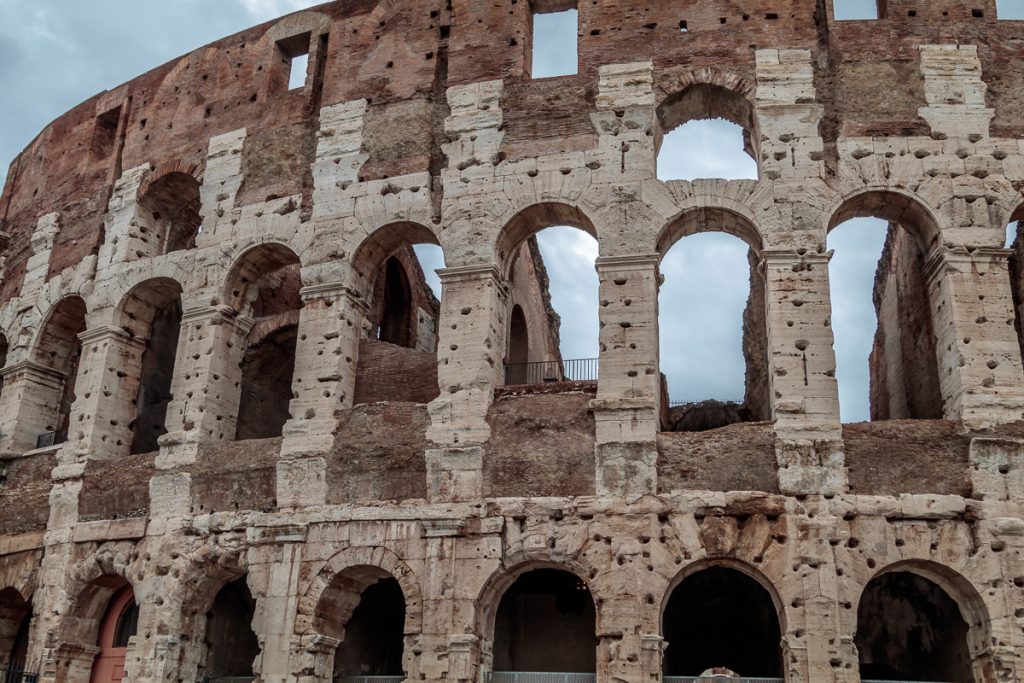 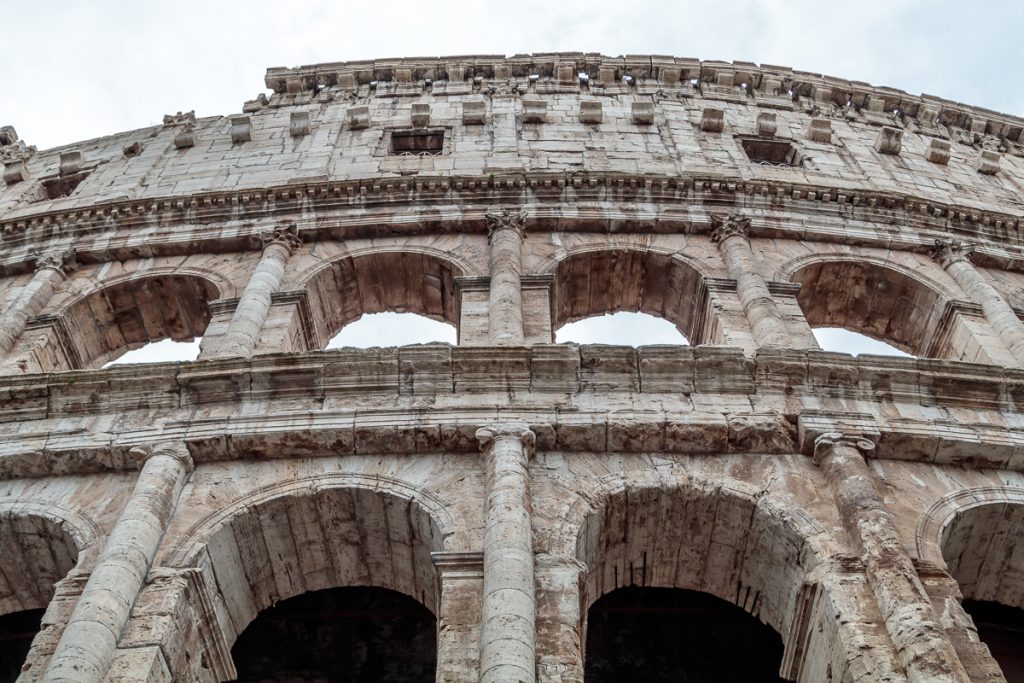 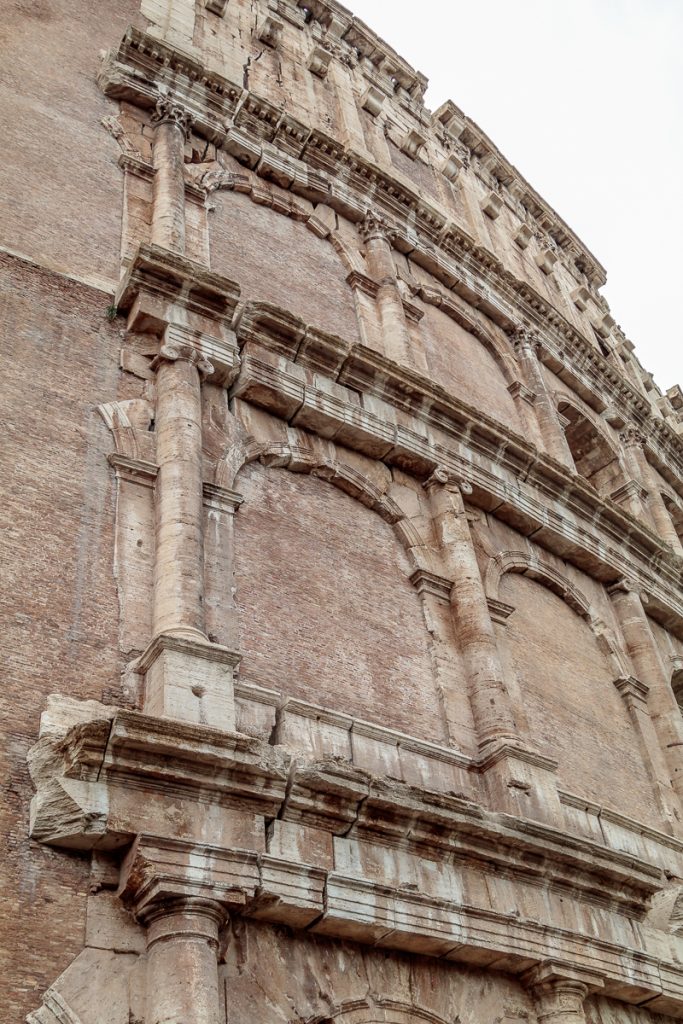 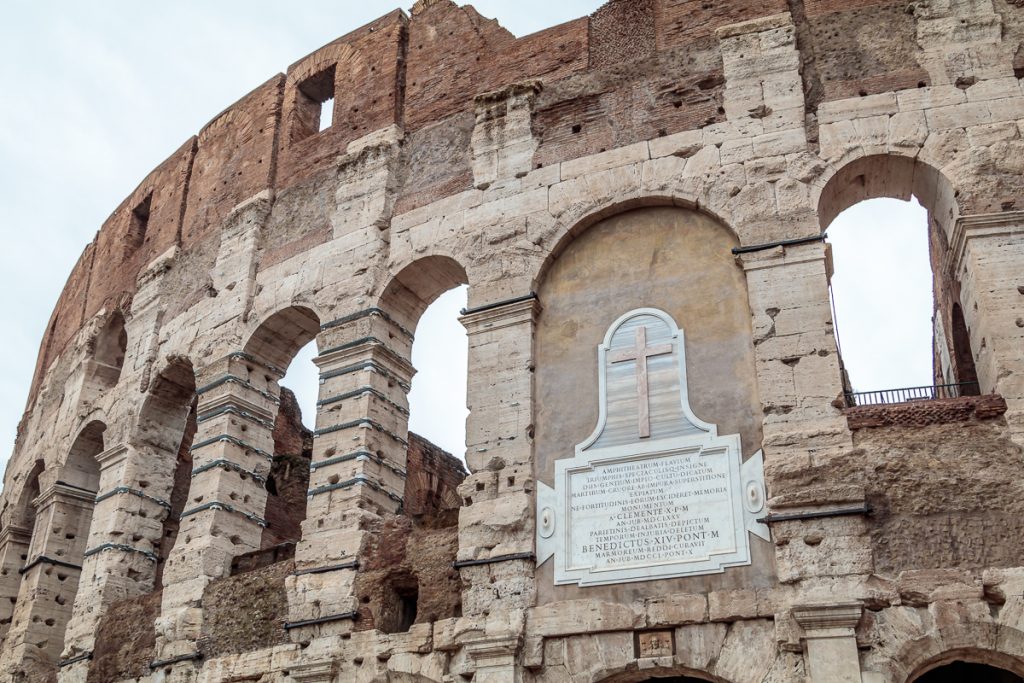 This inscription appears to have been placed by Pope Pius IX at the time of dedication in 1852.  It also contains a reference to Pope Clement X in 1675. 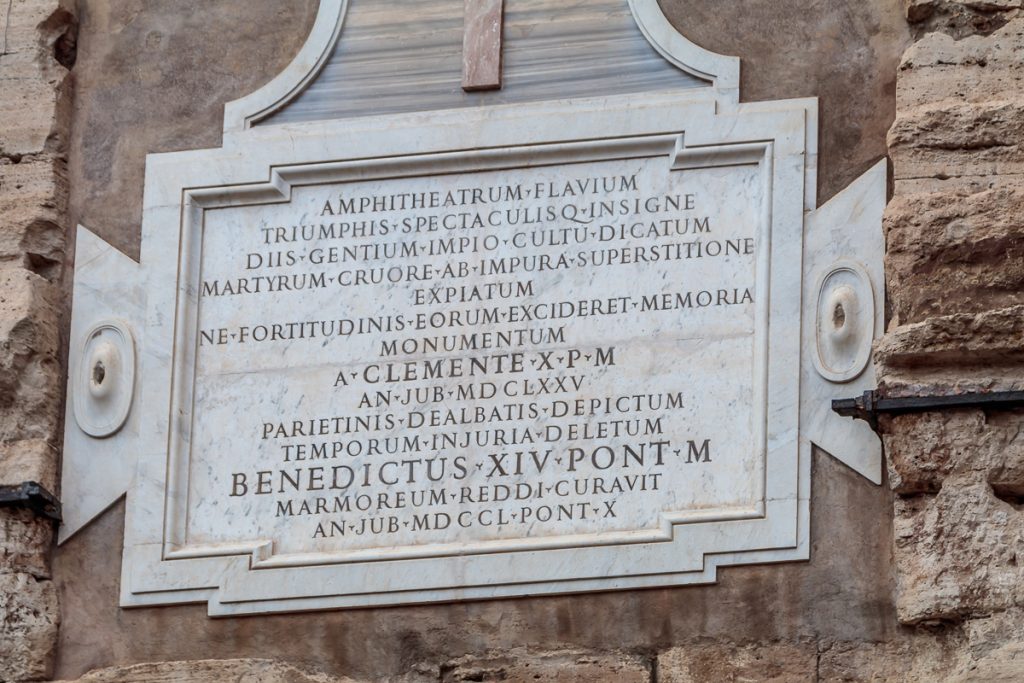 The site chosen for the Colosseum was a flat area on the floor of a low valley between the Caelian, Esquiline and Palatine Hills, through which a canalised stream ran. By the 2nd century BC the area was densely inhabited. It was devastated by the Great Fire of Rome in AD 64, following which Nero seized much of the area to add to his personal domain. He built a grandiose villa on the site, in front of which he created an artificial lake surrounded by pavilions, gardens and porticoes.  After Nero’s suicide in AD 68, the lake was drained, filled, and the Colosseum was built. 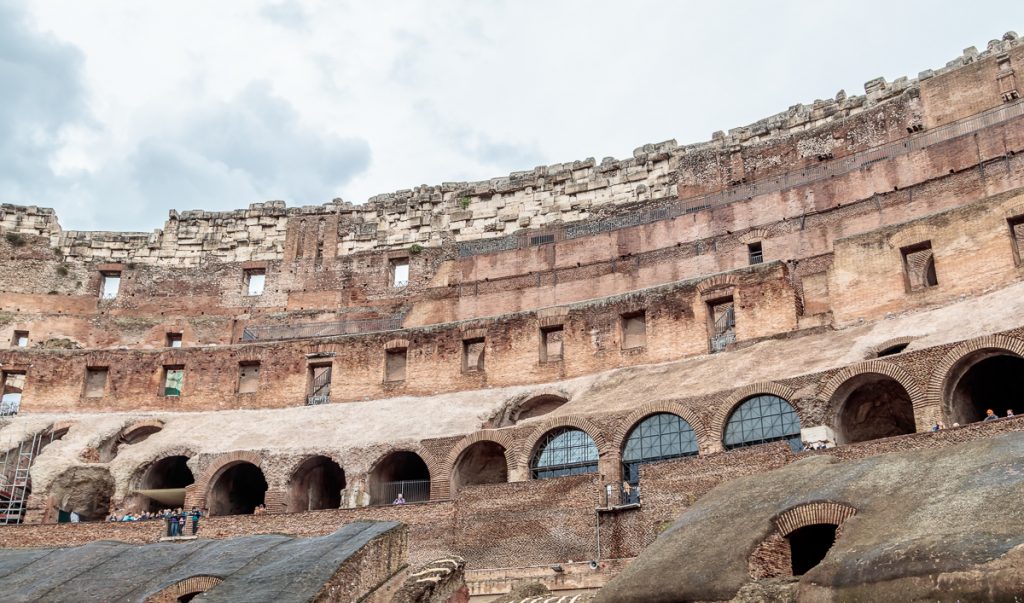 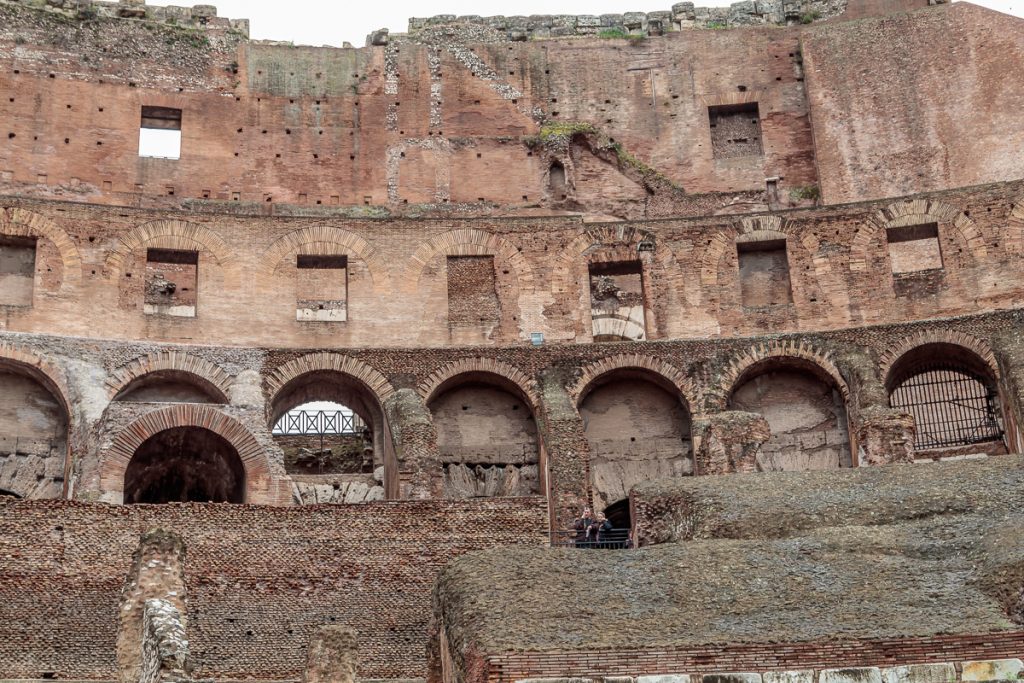 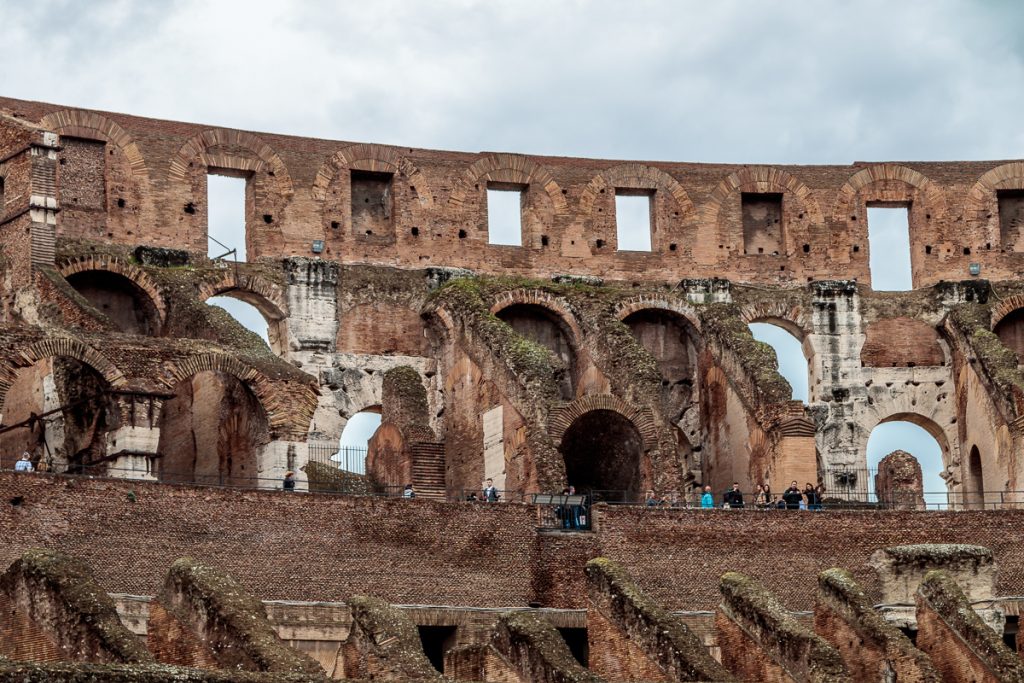 The amphitheatre was ringed by eighty entrances at ground level, 76 of which were used by ordinary spectators. Each entrance and exit was numbered, as was each staircase. The northern main entrance was reserved for the Roman Emperor and his aides, whilst the other three axial entrances were most likely used by the elite. All four axial entrances were richly decorated with painted stucco reliefs, of which fragments survive. Many of the original outer entrances have disappeared with the collapse of the perimeter wall, but entrances XXIII (23) to LIV (54) survive.  Here is number LII (52). 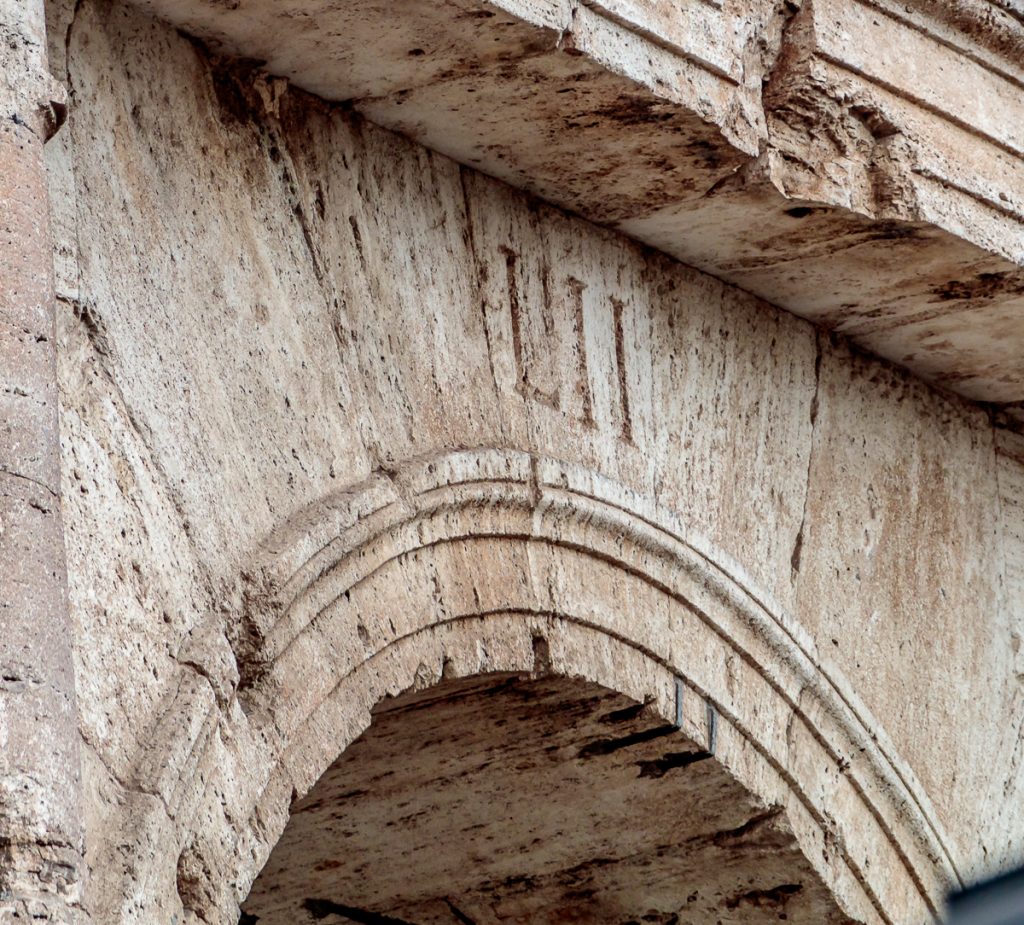 The Colosseum had a retractable cover to protect the spectators from the sun and rain.  This consisted of a canvas-covered, net-like structure made of ropes, with a hole in the center. It covered two-thirds of the arena, and sloped down towards the center to catch the wind and provide a breeze for the audience.  This awning was secured by tying to these posts just outside the arena. 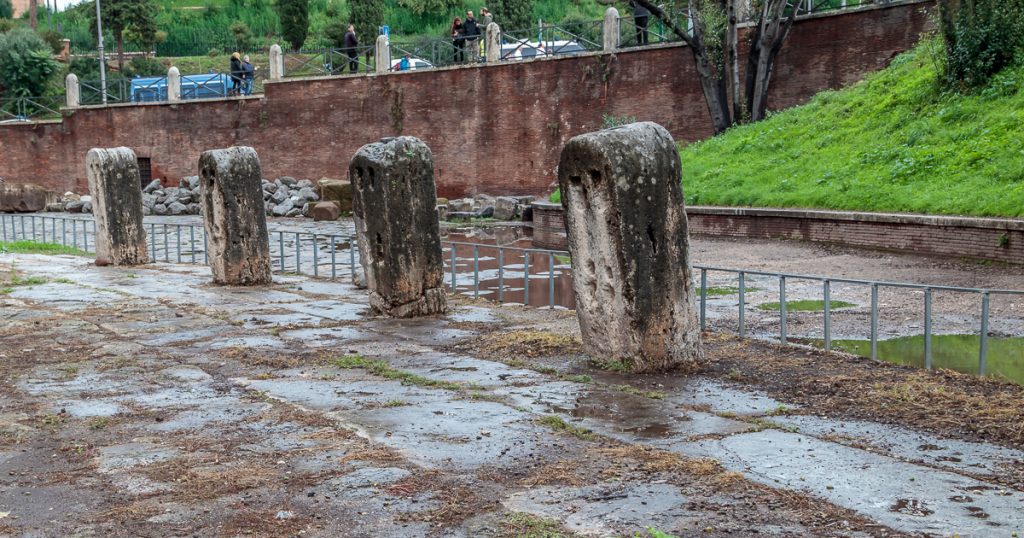 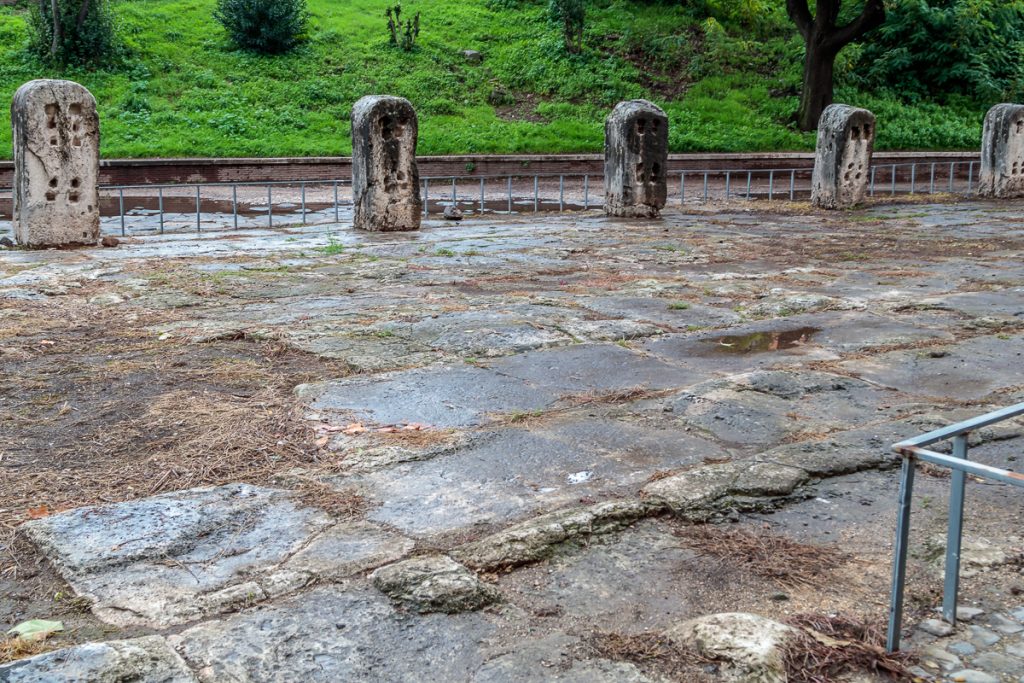 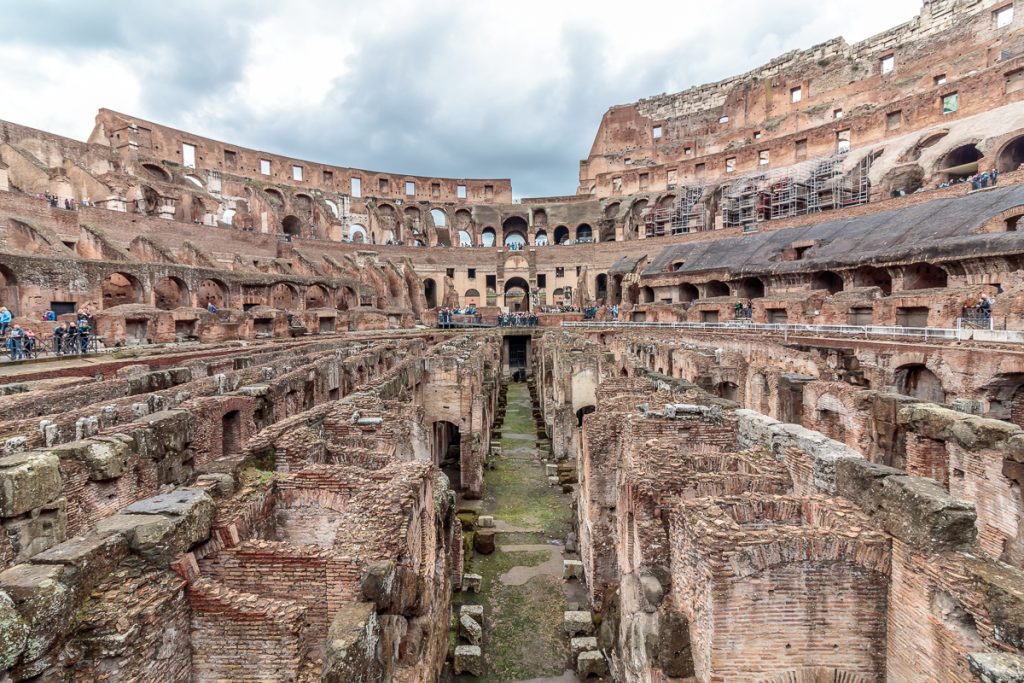 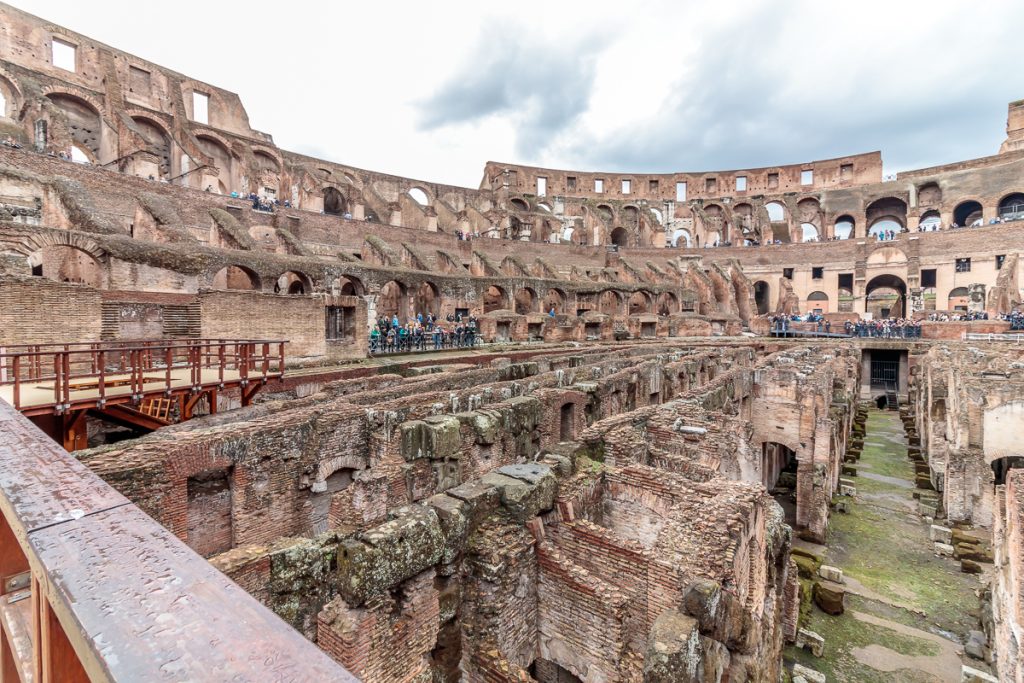 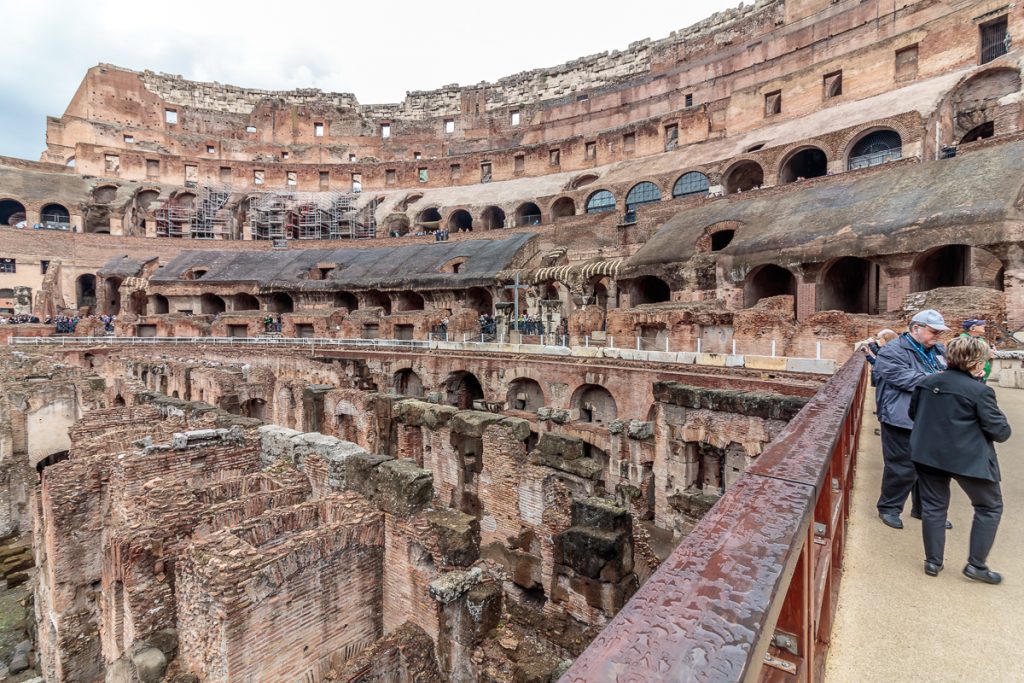 The Colosseum could accommodate 87,000 people.  They were seated in a tiered arrangement that reflected the rigidly stratified nature of Roman society. Special boxes were provided at the north and south ends respectively for the Emperor and the Vestal Virgins, providing the best views of the arena. Flanking them at the same level was a broad platform or podium for the senatorial class, who were allowed to bring their own chairs. The names of some 5th century senators can still be seen carved into the stonework, presumably reserving areas for their use.

The tier above the senators, known as the maenianum primum, was occupied by the non-senatorial noble class or knights (equites). The next level up, the maenianum secundum, was originally reserved for ordinary Roman citizens (plebeians) and was divided into two sections. The lower part (the immum) was for wealthy citizens, while the upper part (the summum) was for poor citizens.

Another level, the maenianum secundum in legneis, was added at the very top of the building during the reign of Domitian. This comprised a gallery for the common poor, slaves and women. It would have been either standing room only, or would have had very steep wooden benches.

Some groups were banned altogether from the Colosseum, notably gravediggers, actors and former gladiators. 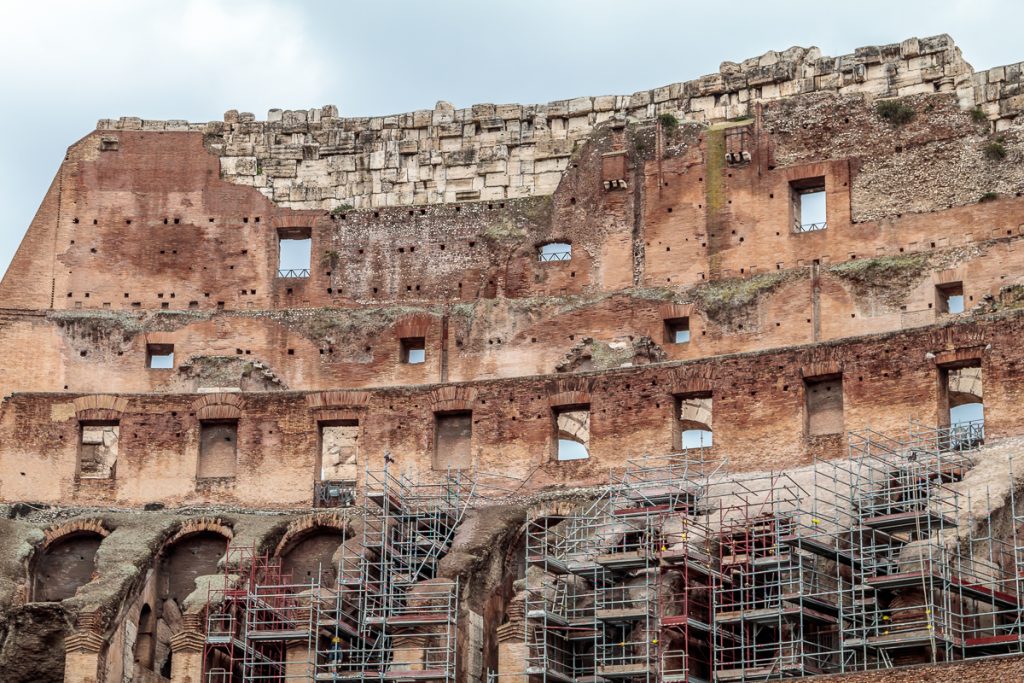 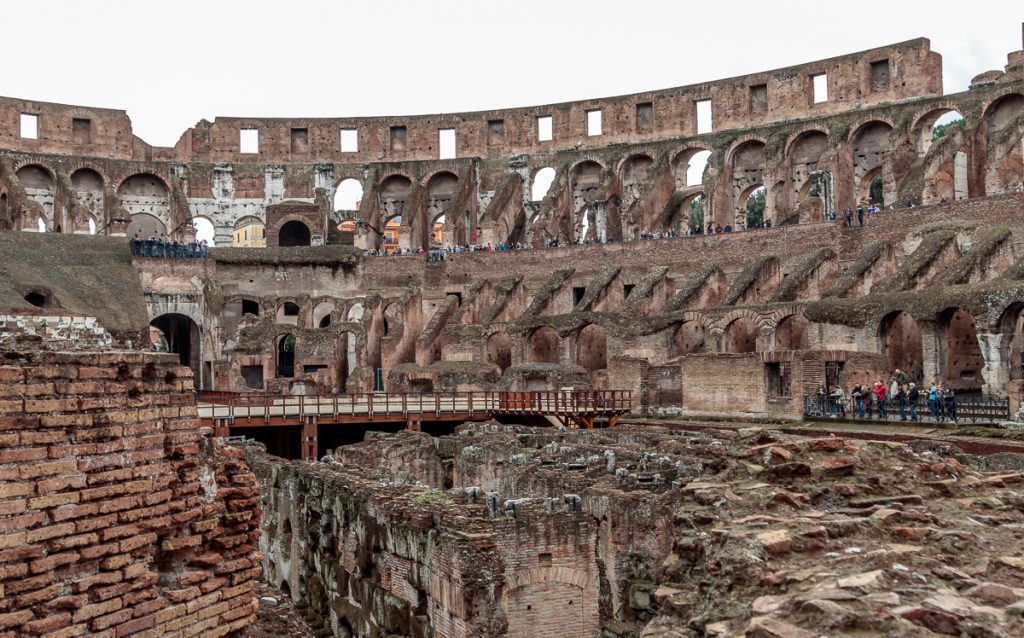 The entire surface of the Colosseum was, at one time, covered in marble.  Some remnants remain. 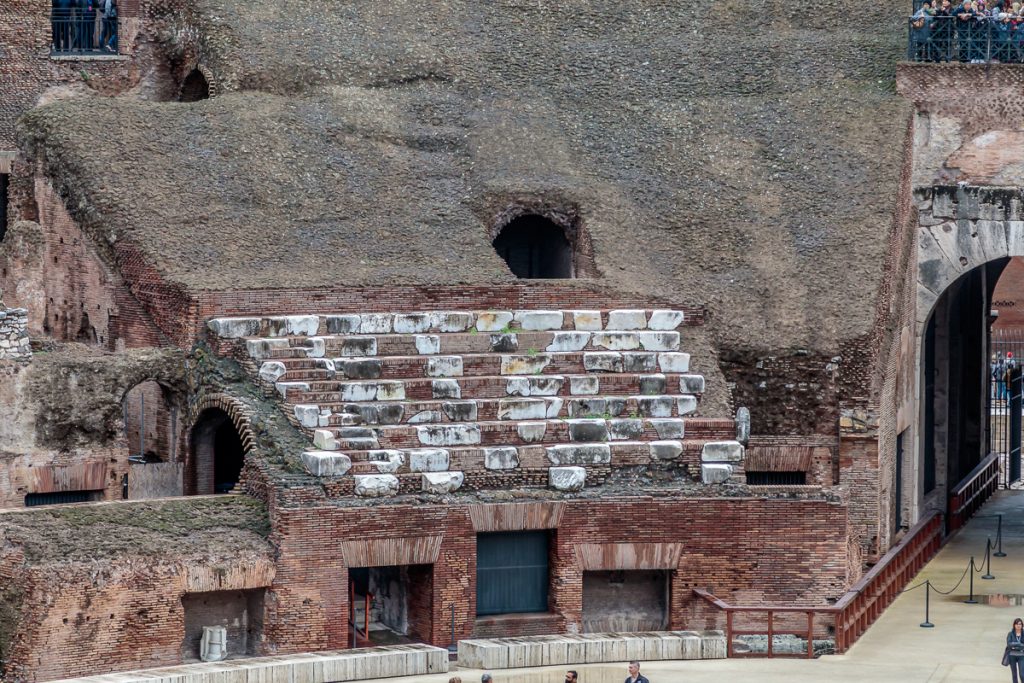 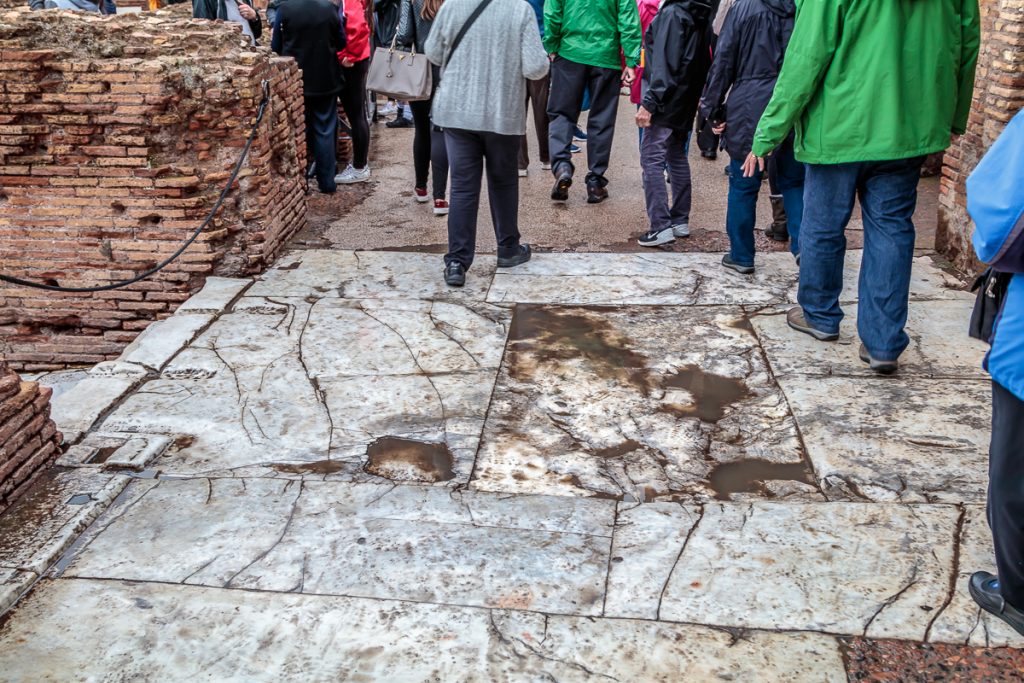 Here are some other views of the Colosseum. 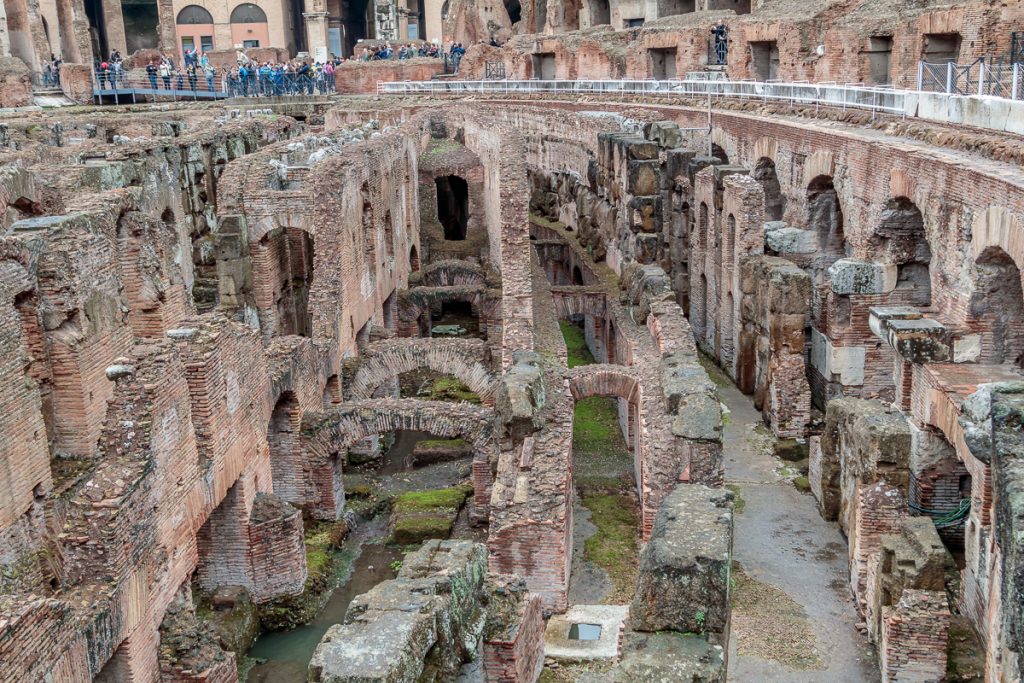 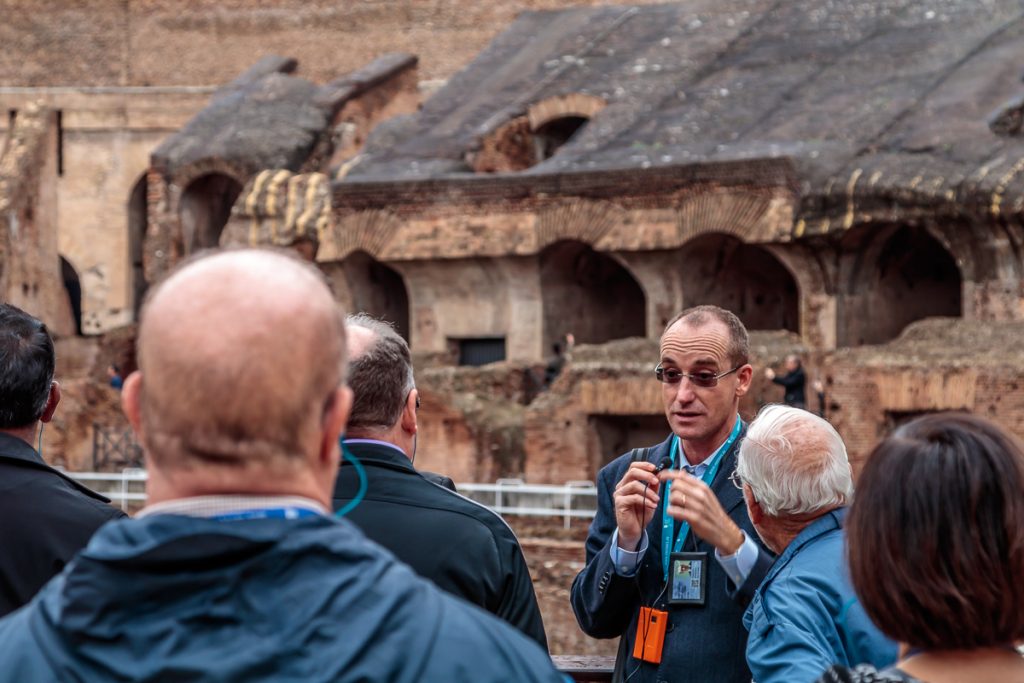 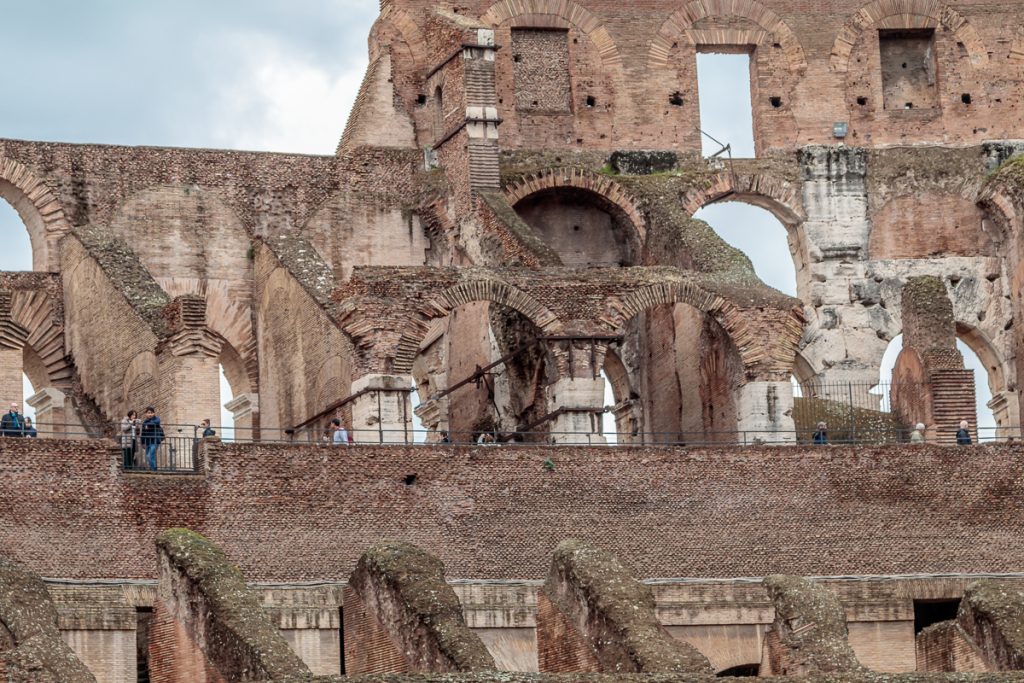 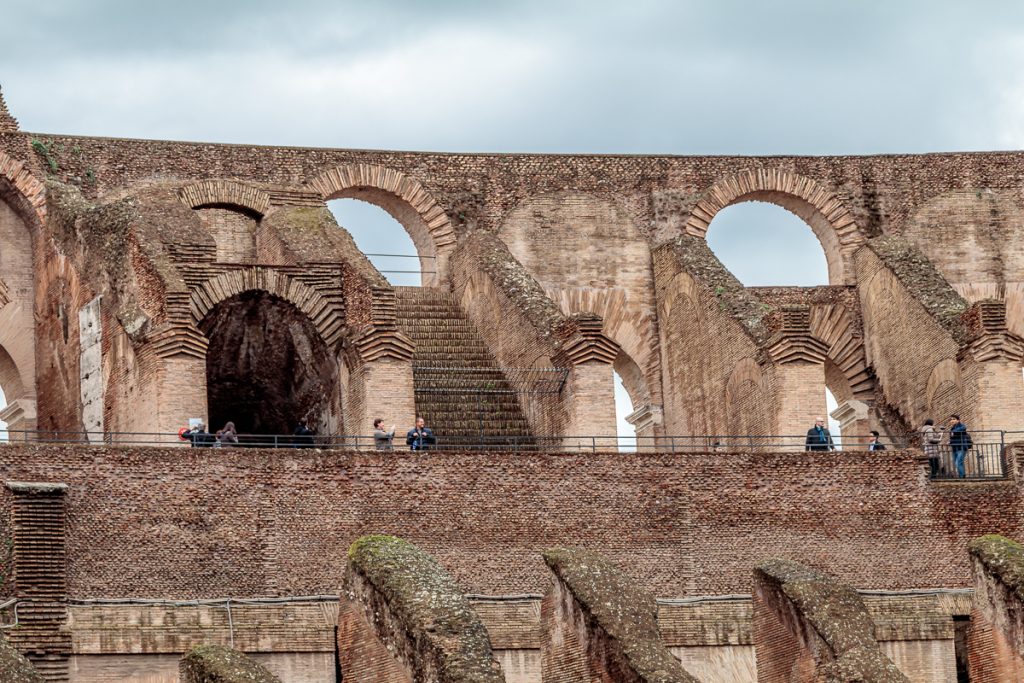 The Colosseum was not used to kill Christians, but, instead, used to host gladiatorial shows as well as a variety of other events. The shows, called munera, were always given by private individuals rather than the state. They had a strong religious element but were also demonstrations of power and family prestige, and were immensely popular with the population. Another popular type of show was the animal hunt, or venatio. This utilized a great variety of wild beasts, mainly imported from Africa and the Middle East 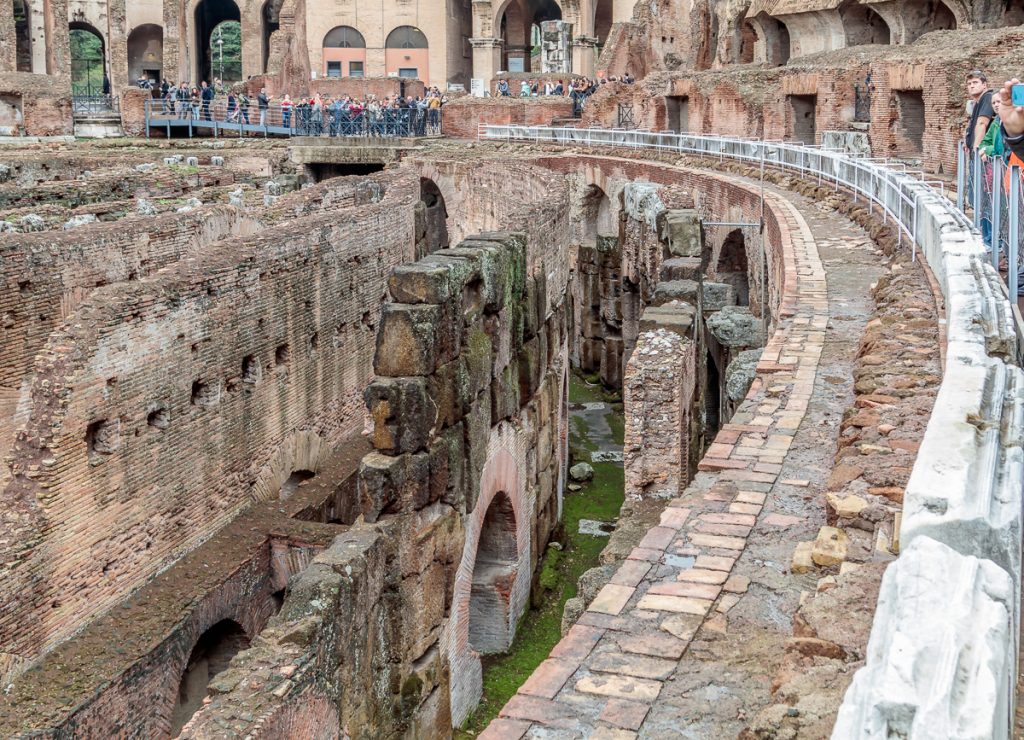 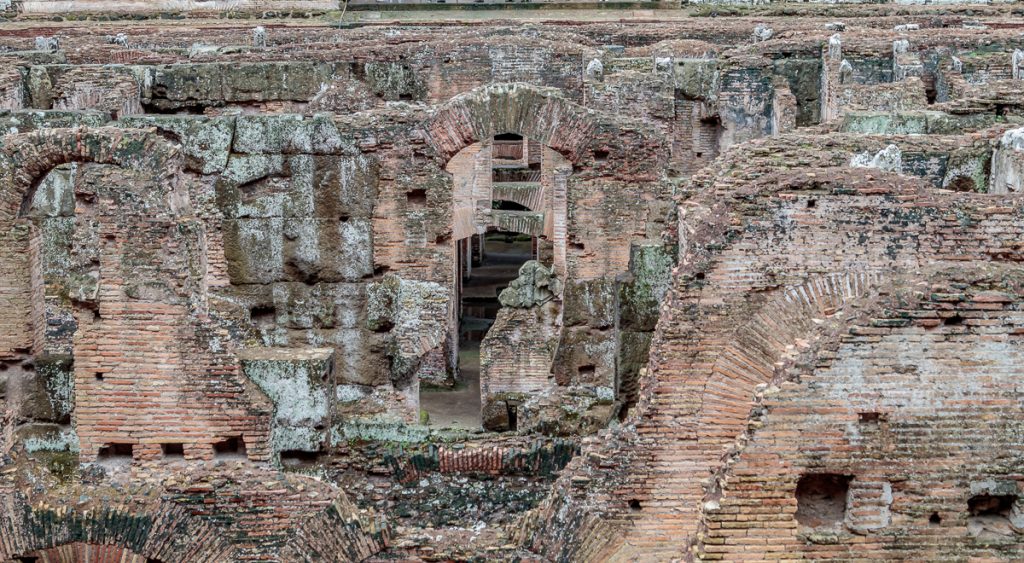 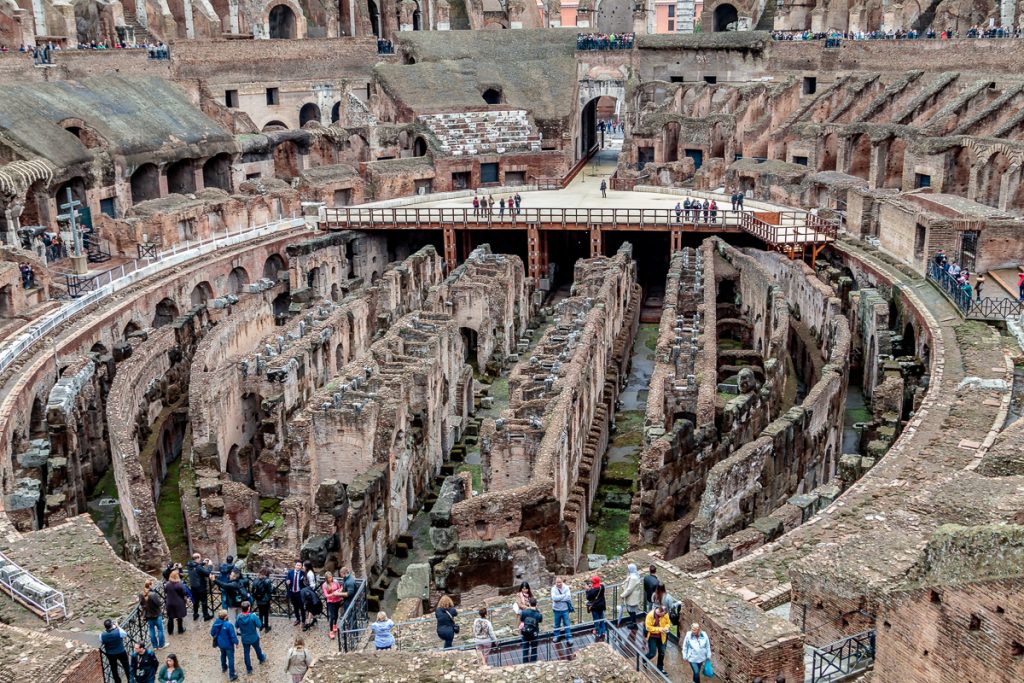 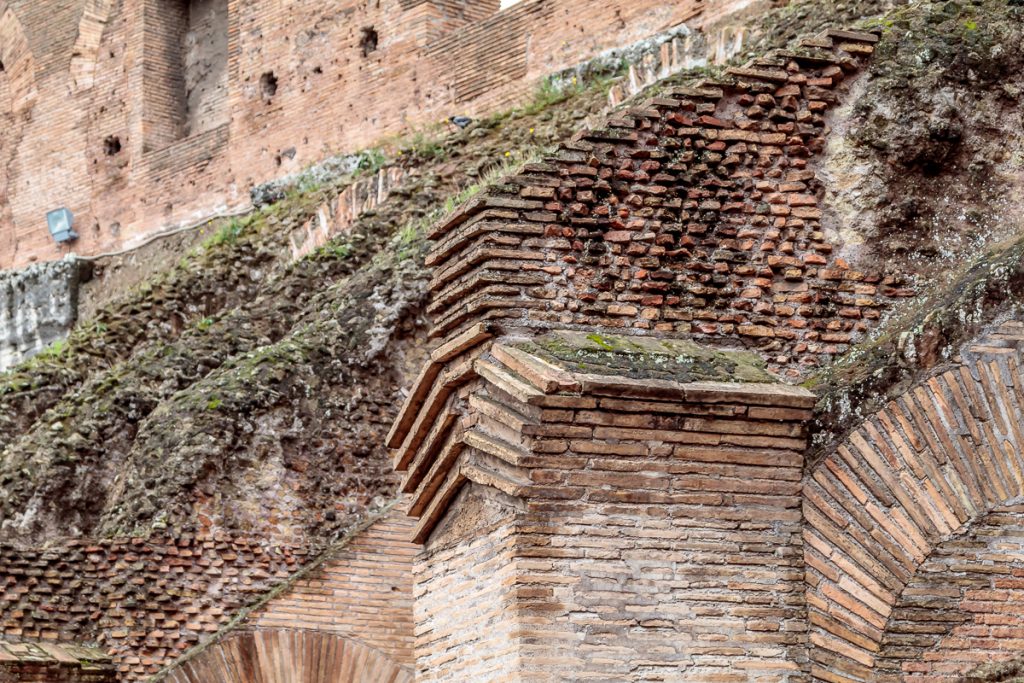 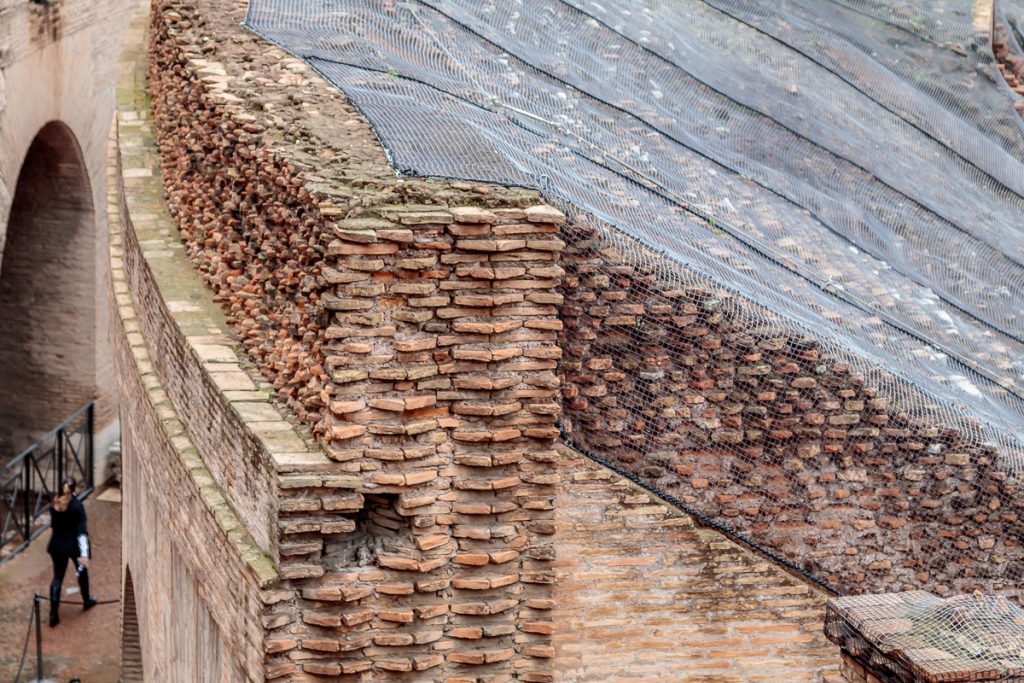 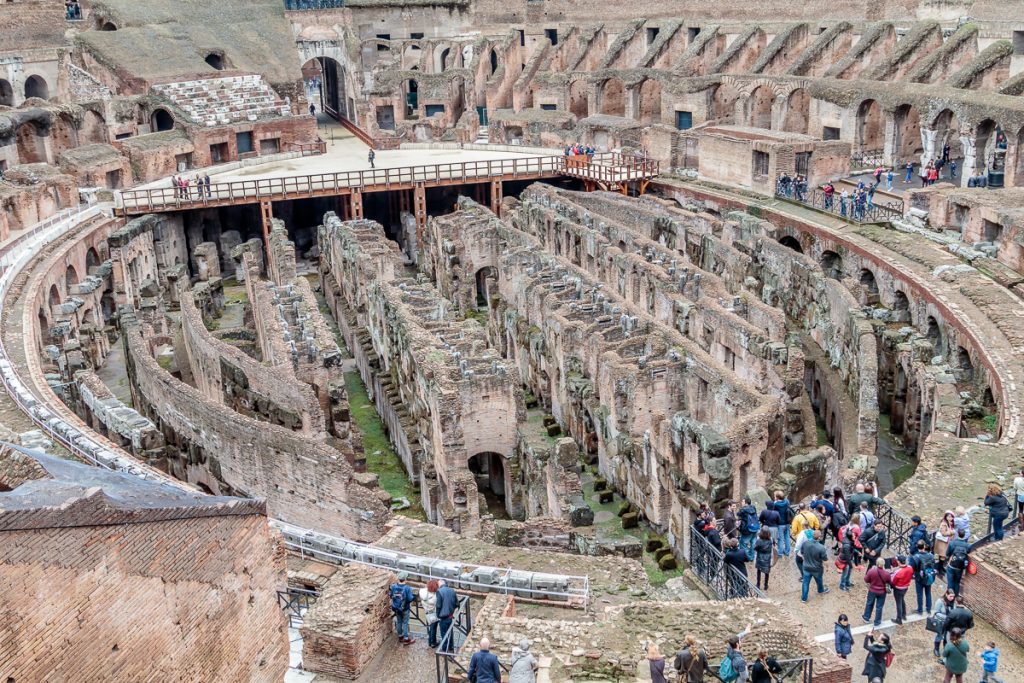 When I photographed this cross, I had no idea what the inscription was.  “Baciando la santa croce si acquista un anno e XI giorni d’indulgenza” or “By kissing the holy cross you can buy a year and eleven days of indulgence”.  I should have kissed the cross. 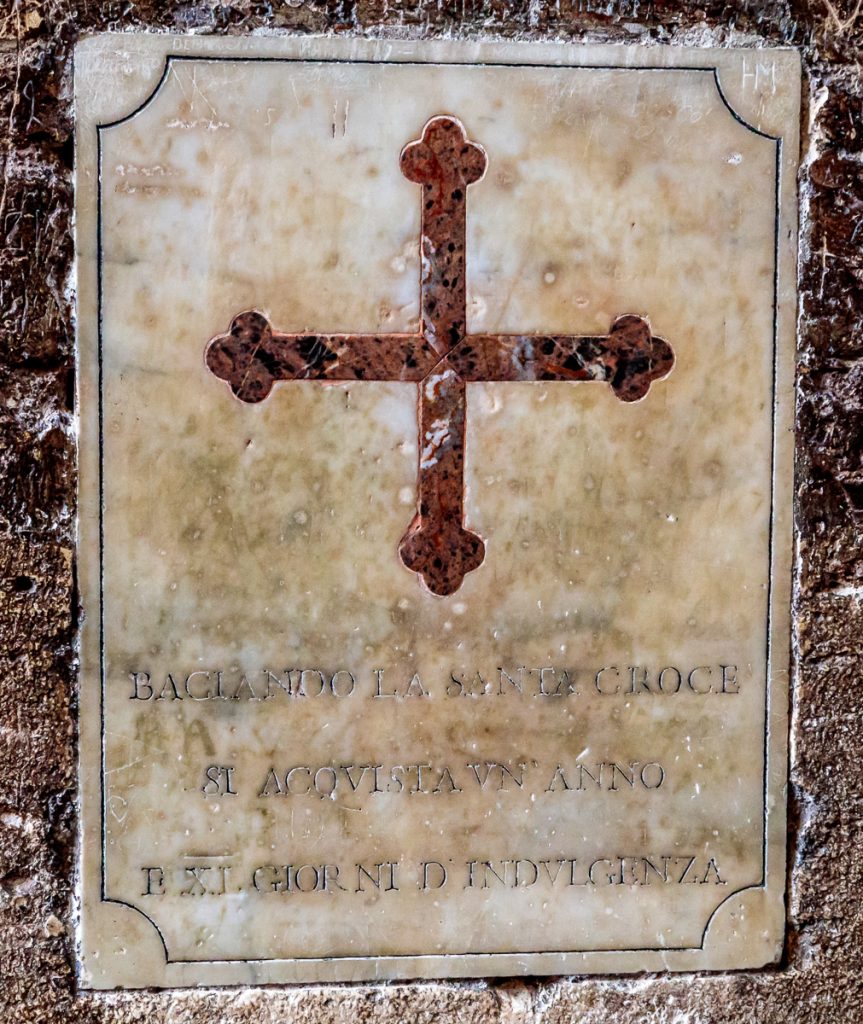 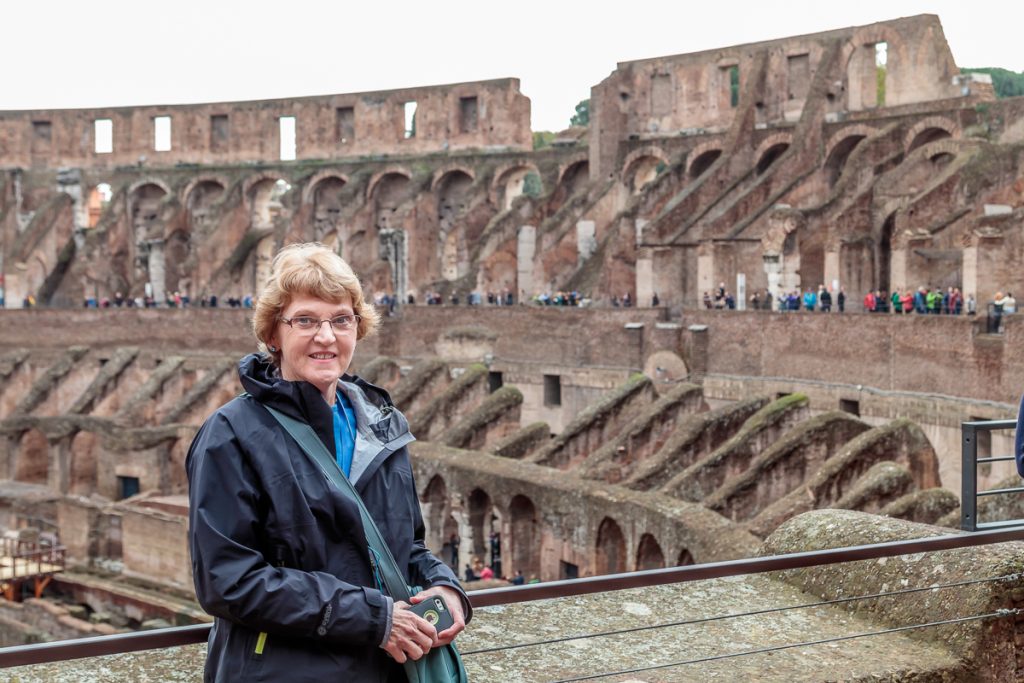 All details from WikiPedia and translations by translate.google.com.

With that, we moved on to Piazza Navona.  Stay tuned.

This entry was posted in Travel and tagged Colosseum, Italy, Rome.