We entered Assisi through the Porta Nova, one of the gates of this walled city. 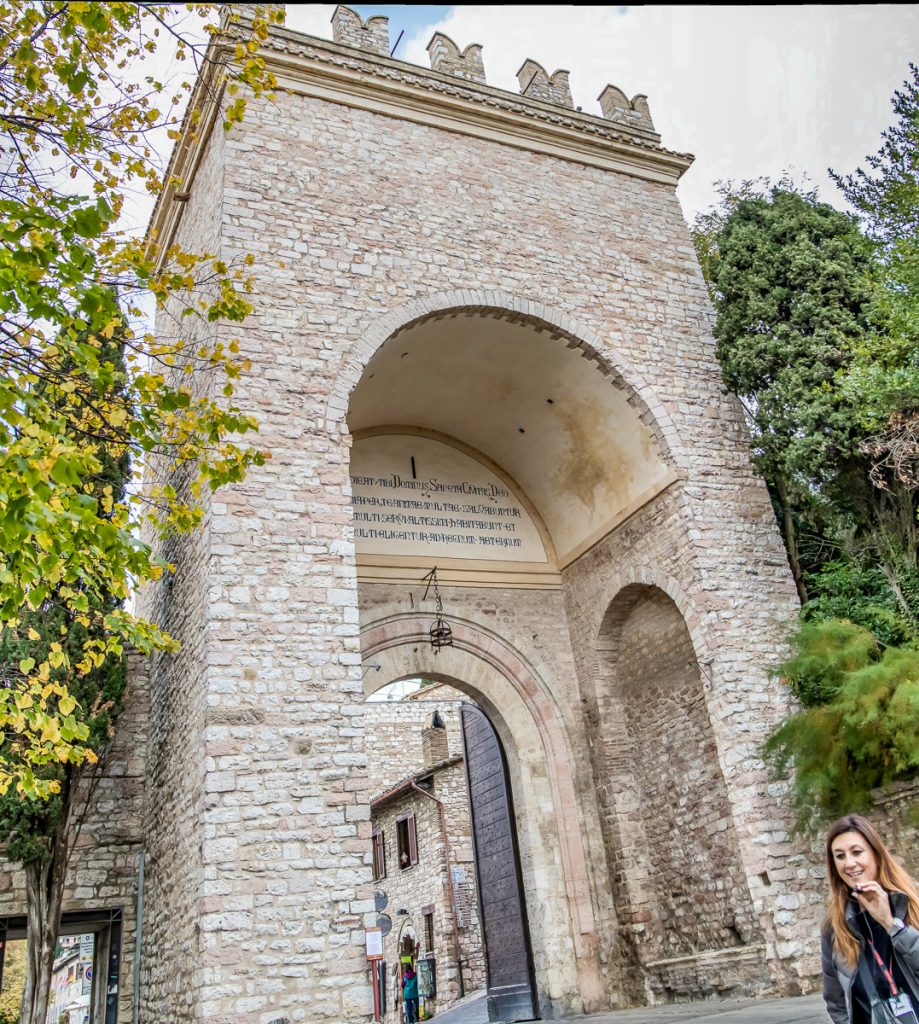 Assisi flourished in Roman times as a walled city.   For many centuries the area inside the walls was large enough to contain the population.  However, due to the population growth in the previous century, a new wall was built in 1316 that had eight gates.  One of those is Porta Nova.  The new walls included enough area to allow continued growth.  However, the increased area was ultimately not needed because in 1348, the Black Death was an assault on the city that the walls could not keep out, killing about half of the population of Assisi. (WikiPedia and http://romeartlover.tripod.com/Assisi1.html)

You will note an inscription at the top of the gateway.  This is the blessing by St. Francis upon the city.

“When St. Francis was dying (1226) he was carried from the city of Assisi to St. Mary of the Angels in the plain below.  (This would be the small chapel currently housed in the “new” St. Mary of the Angles.)  Then the brothers took him in their arms and carried him, and many people of the town went with them.  And when they had come to a hospice that was by the wayside, St. Francis said to those that carried him, “Lay me upon the ground, and turn my face towards the city.”  And when his face was set towards Assisi, he blessed the city with many blessings, saying “Blessed be thou of God, holy city, for through thee shall many souls be saved; and from thee shall dwell many servants of God; and from thee shall many be chosen for the kingdom of eternal life.”  And when he had said these words, he bade them carry him on to St. Mary of the Angels.”   Words of St. Francis from his Works and the Early Legends, Selected and Translated by Anne Macdonell, J.M.Dent & Co., London, 1904 (Digitized by Google)

A short ways into town we came upon Piazza del Comune. 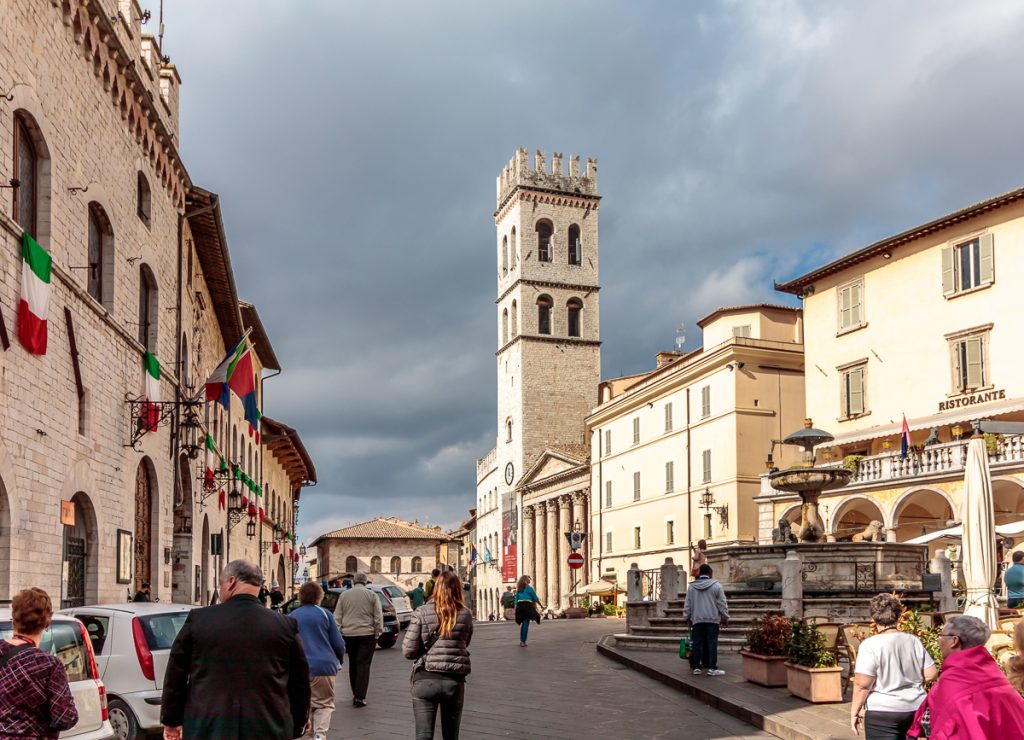 There are two major features of this piazza, the Fountain of Three Lions and the Temple of Minerva. 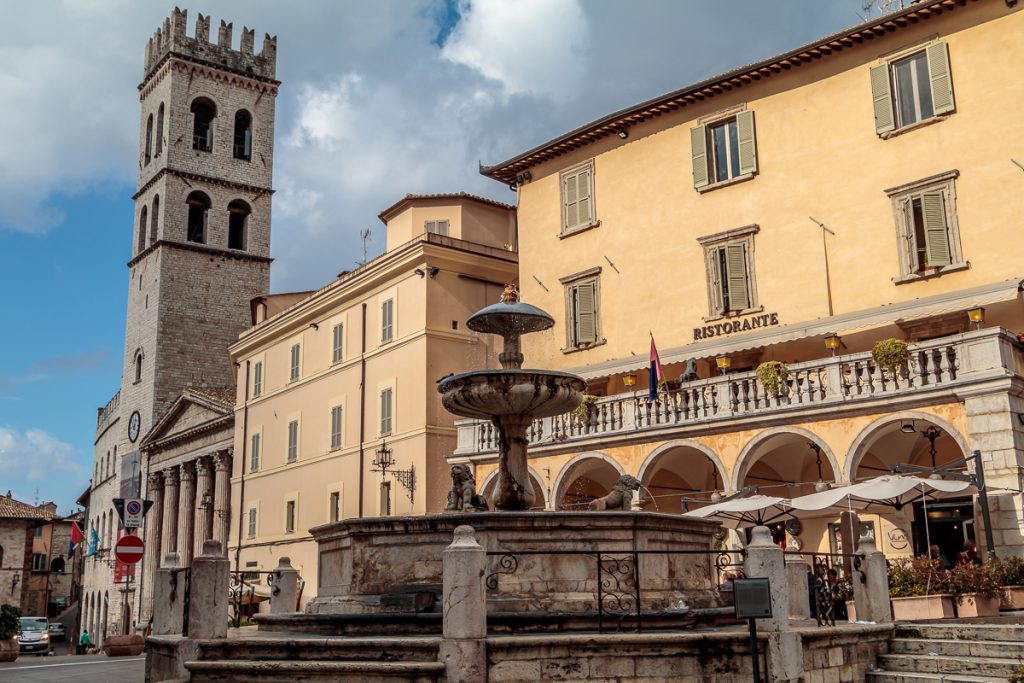 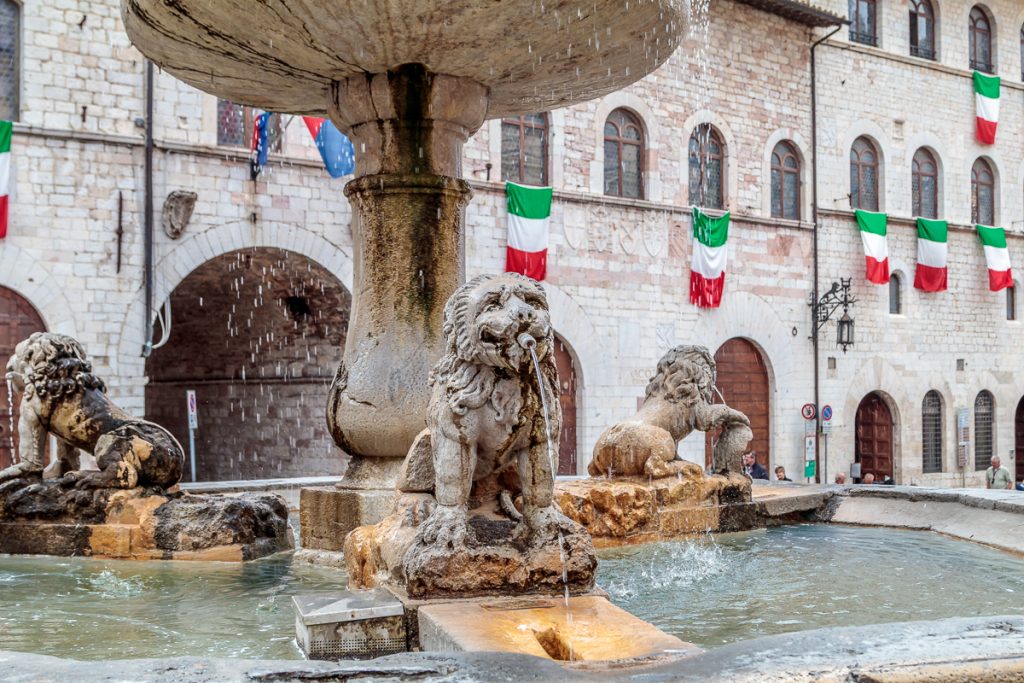 Closeup of Fountain of Three Lions

The Temple of Minerva was erected in 30 BC, dedicated to Hercules.  It was transformed into the church of Santa Maria sopra Minerva in the sixteenth century.  It is one among the best preserved Roman temples of the ancient world (WikiPedia). 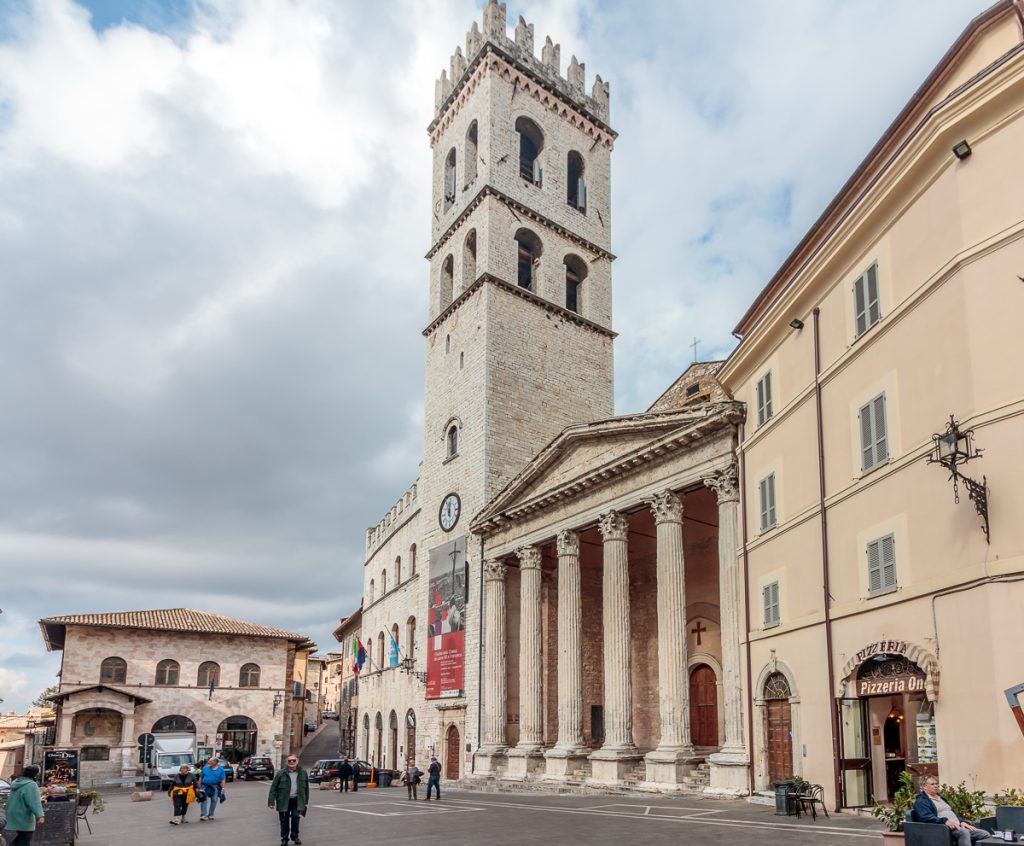 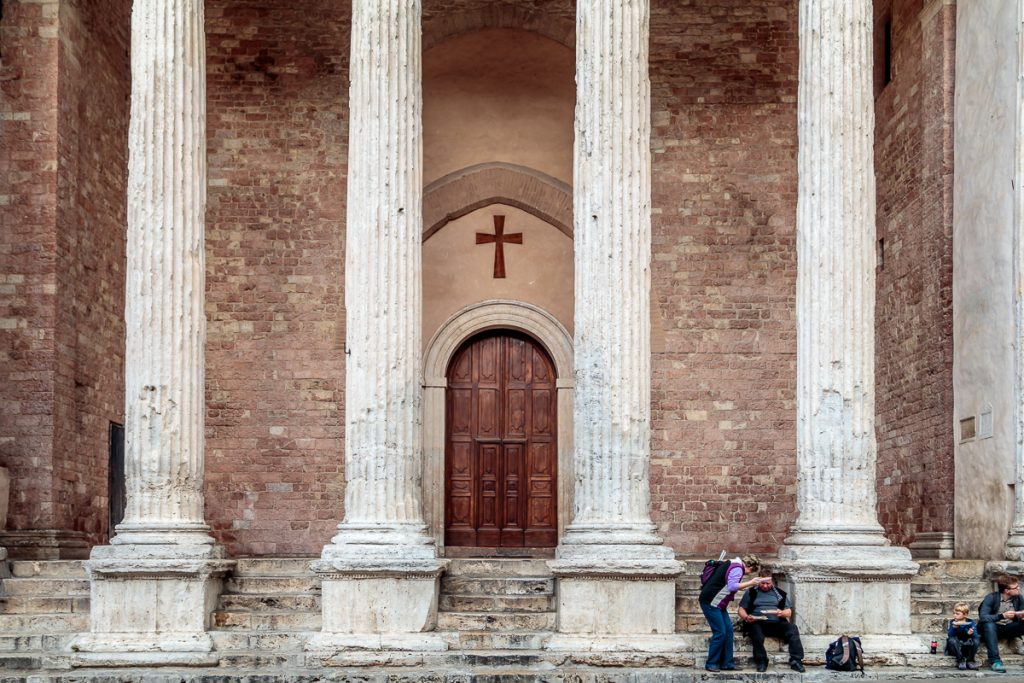 Pillars at Temple of Minerva

There are lots of interesting shops and food marts along the streets.  This is one my favorites. 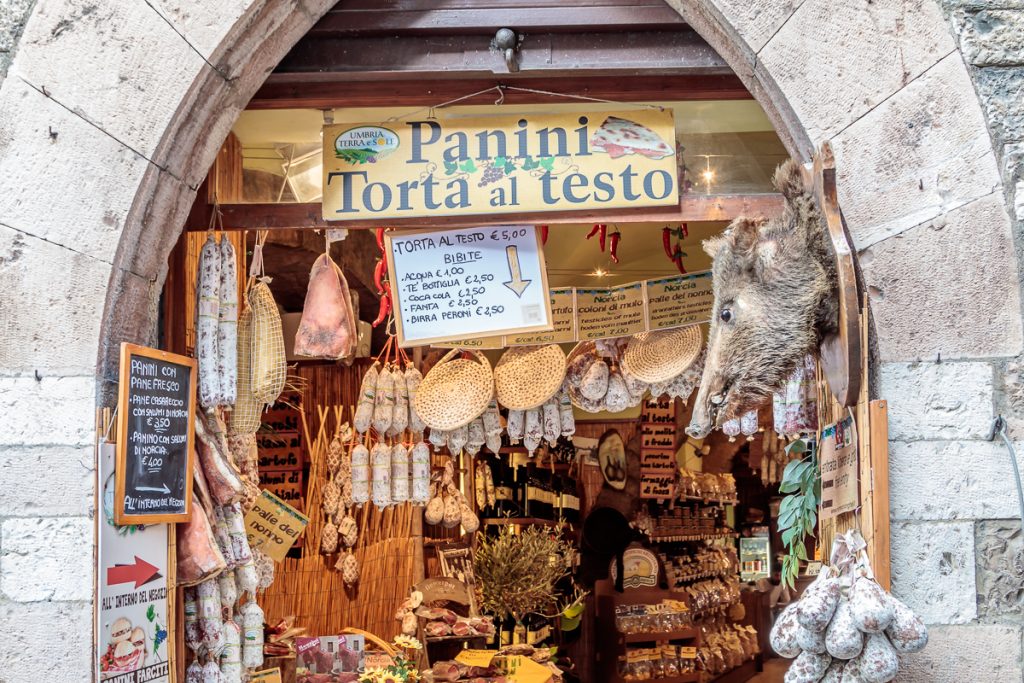 The boar’s head caught my attention first, but pay close attention to the signs inside the shop (click to enlarge the image.)  It turns out that there are a couple salamis that are specialties of Norcia region.  One is called “Palle del Nonno” which translates to “Grandfather’s Balls”.  It is a salami stuffed into natural casings with a particular shape, which gives its name to the product. Pork, finely ground, are prepared as tradition has it, that is, using only natural seasonings. Maturing takes place in the cellar, the first in that stationed salami with wood burning fireplace, then is transferred into the other to finish ripening. (http://www.norcineriaansuini.it/norcineria/?p=220, translated by Google).  These are the sausage hanging inside the store that look a bit like pine cones.

The other specialty is Cajoni di Mulo (Mule Testicles), named because its shape (not the size) is similar to the testicles of the humble, precious animal that, for centuries, has helped the Apennine mountaineers in transporting their heavy loads up along the most impervious of paths.  This product can only be found in the Norcia area.  They are made from lean pork, which is finely minced and then stuffed into natural pig casings with a piece of lard. Curing is done naturally in cool, moist rooms. Its distinguishing feature is that it is tied to a wedge of beech. Some people eat it after soaking it in red wine for two days. (http://www.tipicamenteumbria.it/index.php?option=com_content&view=article&id=77%3Acoglioni-di-mulo-&catid=39%3Acarne-e-norcineria&Itemid=67&lang=en)  These are the sausages hanging on the right side of the doorway.

There is a great deal of art and blessings on the streets of Assisi.  Two examples are shown here. 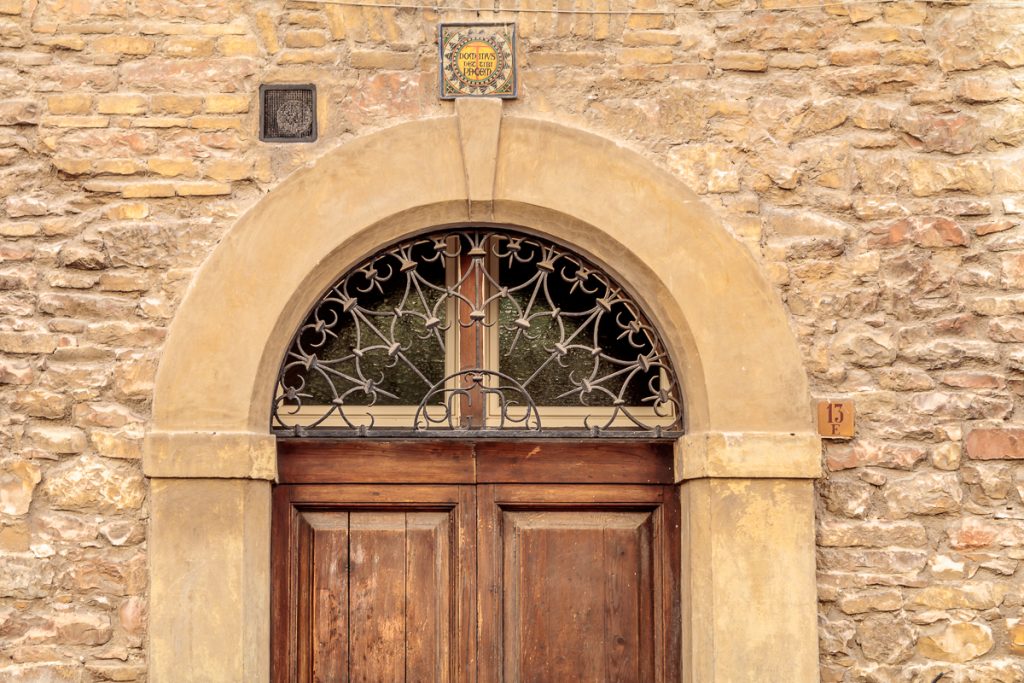 This decorative door is interesting on its own, but there is a small placard above the door with a blessing.  “Dominus det Tibi Pacem” translates to “Lord give you peace.”

I loved this street corner.  Note the art above the doorway. 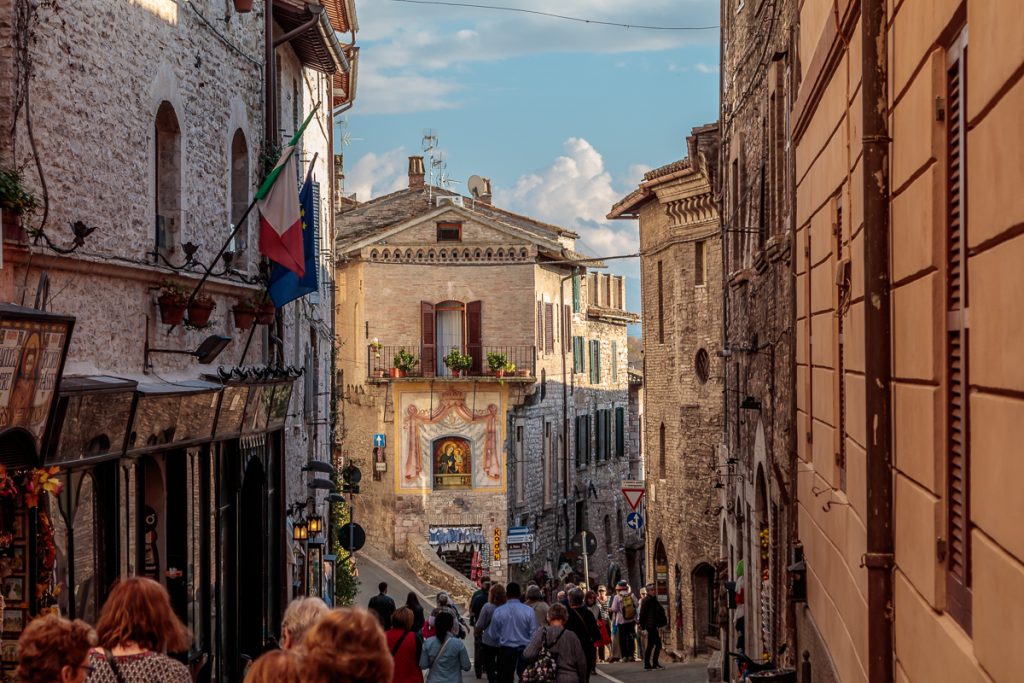 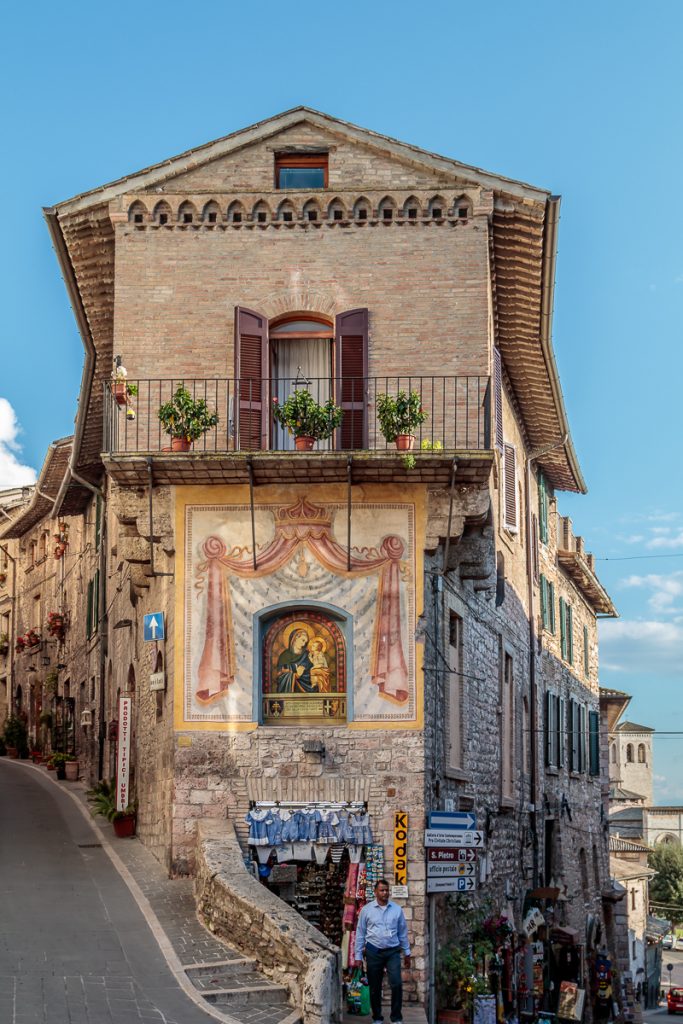 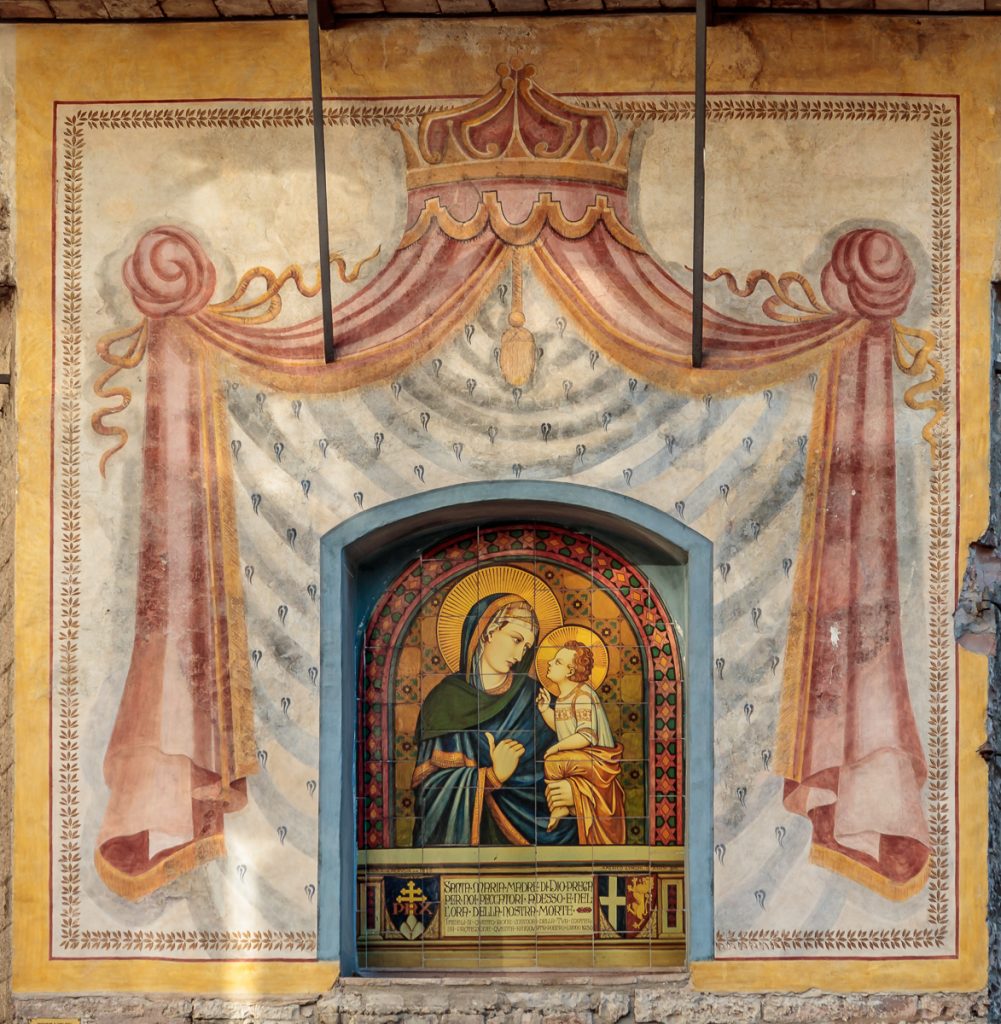 A close inspection will show an inscription at the bottom.  “Santa Maria Madre di Dio prega per noi peccatori adesso e nel l’ora della nostra morte.”  Do you recognize this?  Translated it is “Holy Mary, Mother of God, pray for us sinners now and at the hour of our death.”  Below that is a further inscription that roughly indicates that “faithful of this district and mindful of maternal protection, this was erected in the year 1930”.

I love all the surprises you can find on the streets.  Some I didn’t recognize until I saw the photos I took.

Thanks for following along with me.

This entry was posted in Travel and tagged Art, Assisi, Inscriptions, Italy.