Rose and I visited the Meijer Gardens in Grand Rapids about 2 weeks ago.  We missed the butterfly exhibit by a couple weeks, but were still impressed with all we saw.  It had been many years since we had been there and there are several new sculptures and gardens.

I can’t do justice in describing all the sculptures we saw, but I’ll give some descriptions where I can.

This two-headed sculpture stands just outside the gardens. 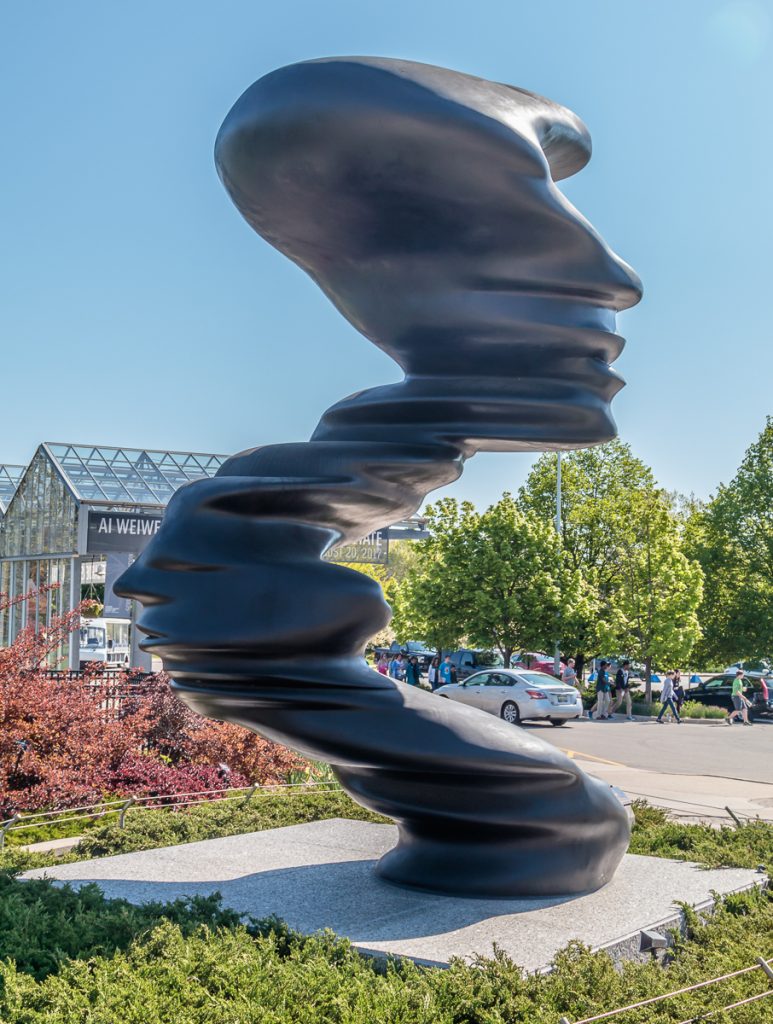 There are 5 sculptures standing on tall pillars near the “tour bus” terminal”.  The tour is highly recommended as it makes its way around most of the gardens and is accompanied by a description of several sculptures. 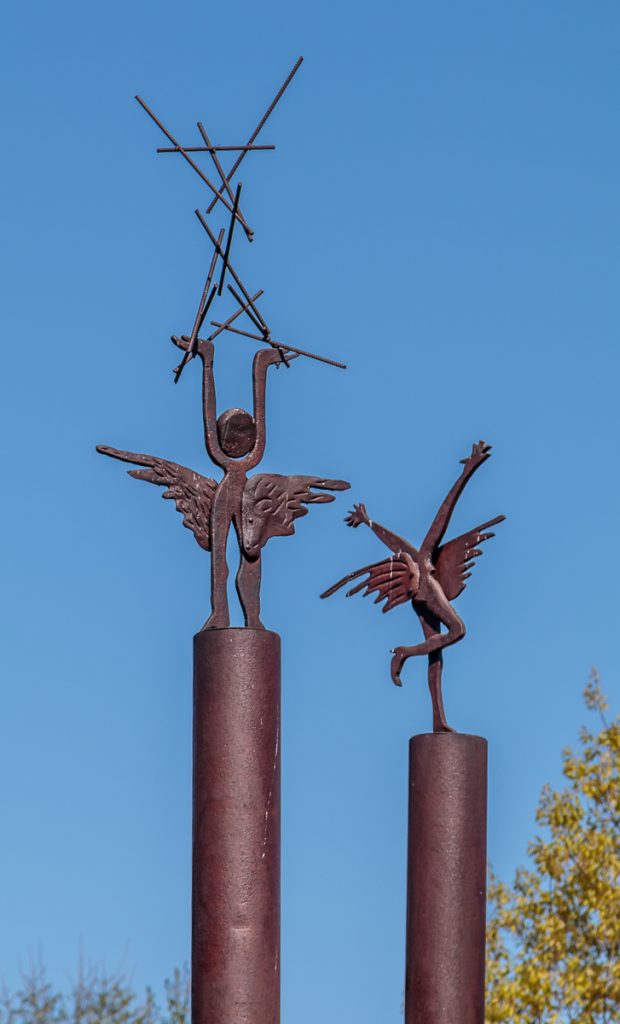 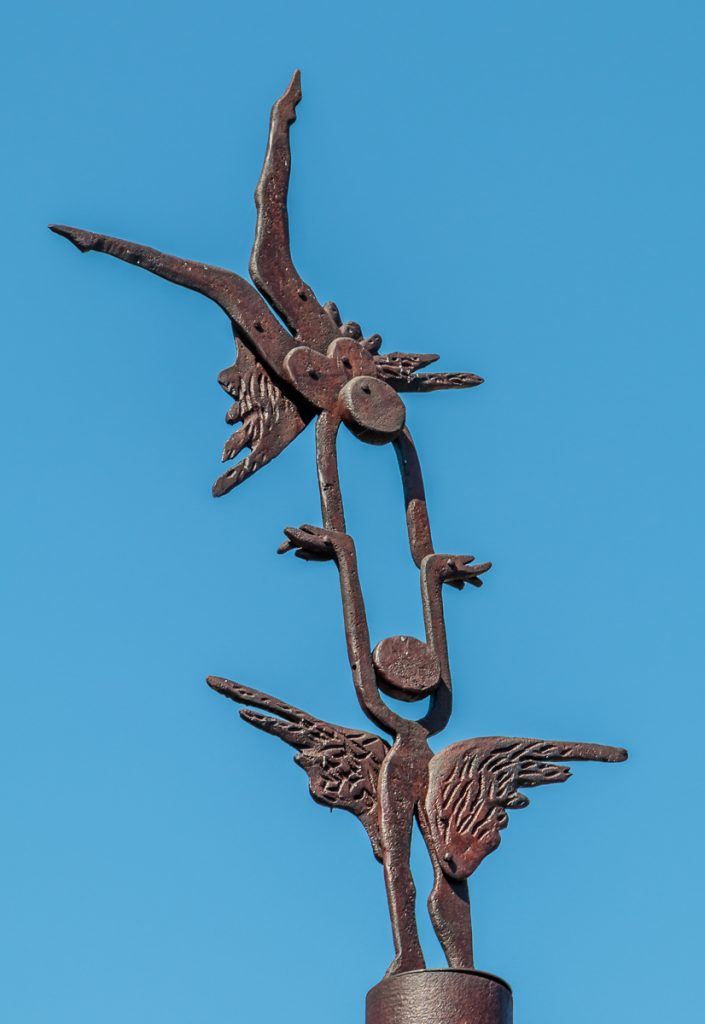 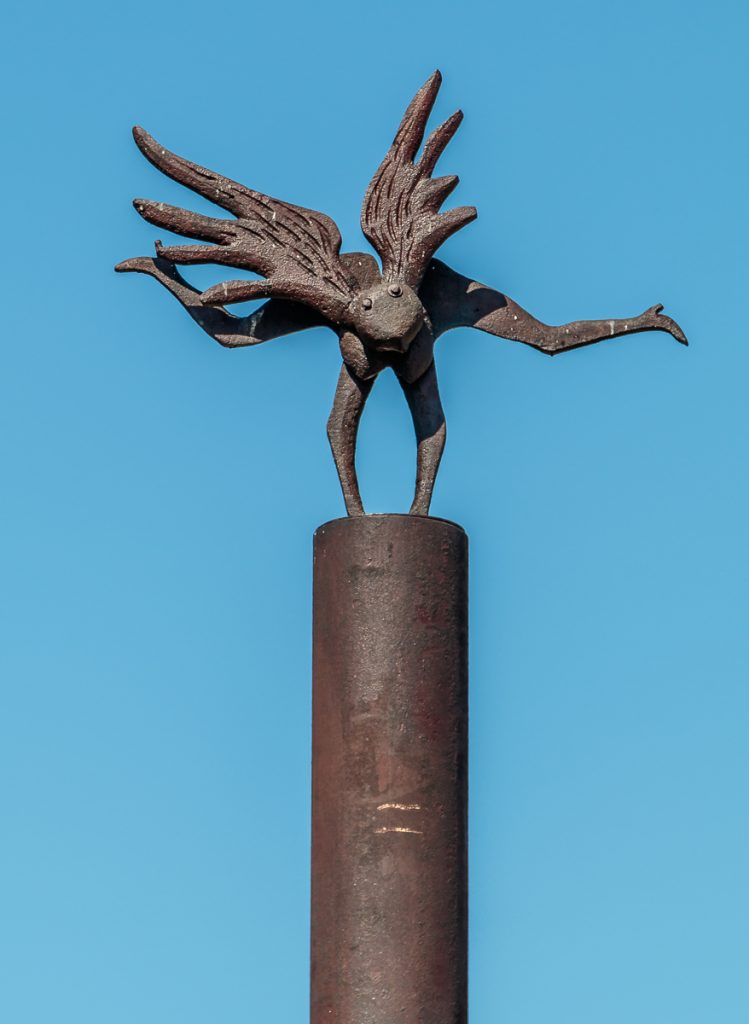 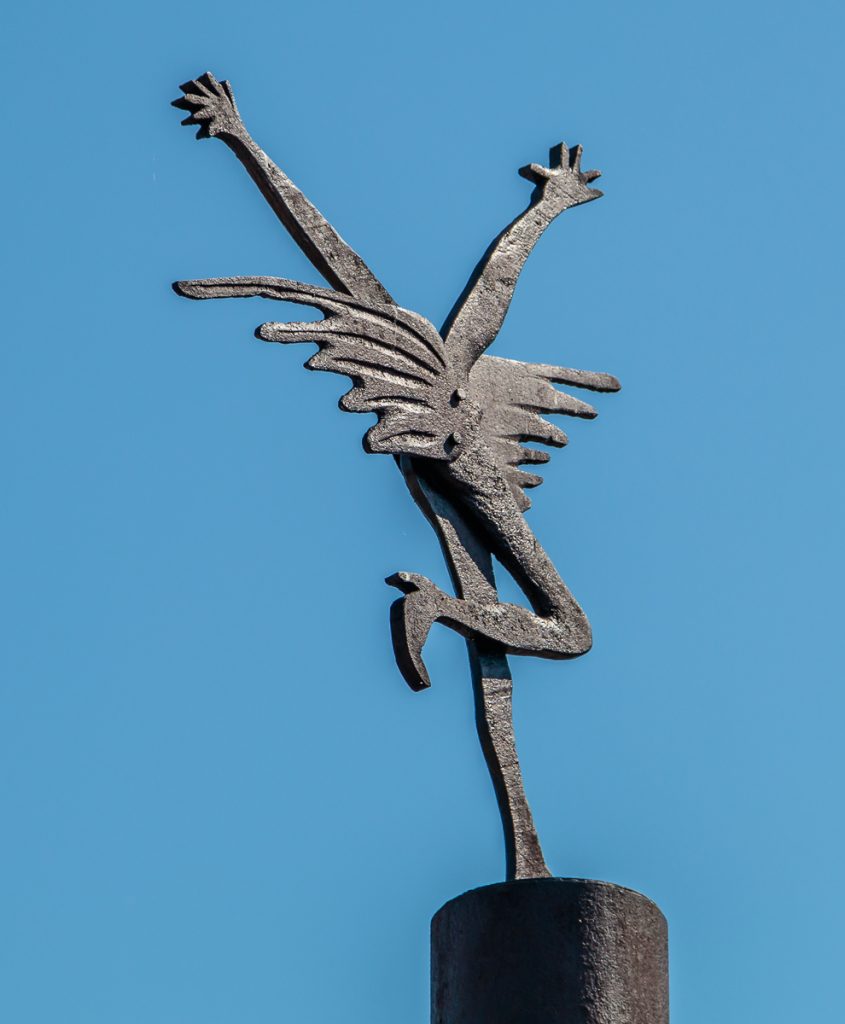 Of course, Meijer Gardens is a sculpture garden, so includes both sculptures and gardens.  These were blooming magnificently in the morning sun. 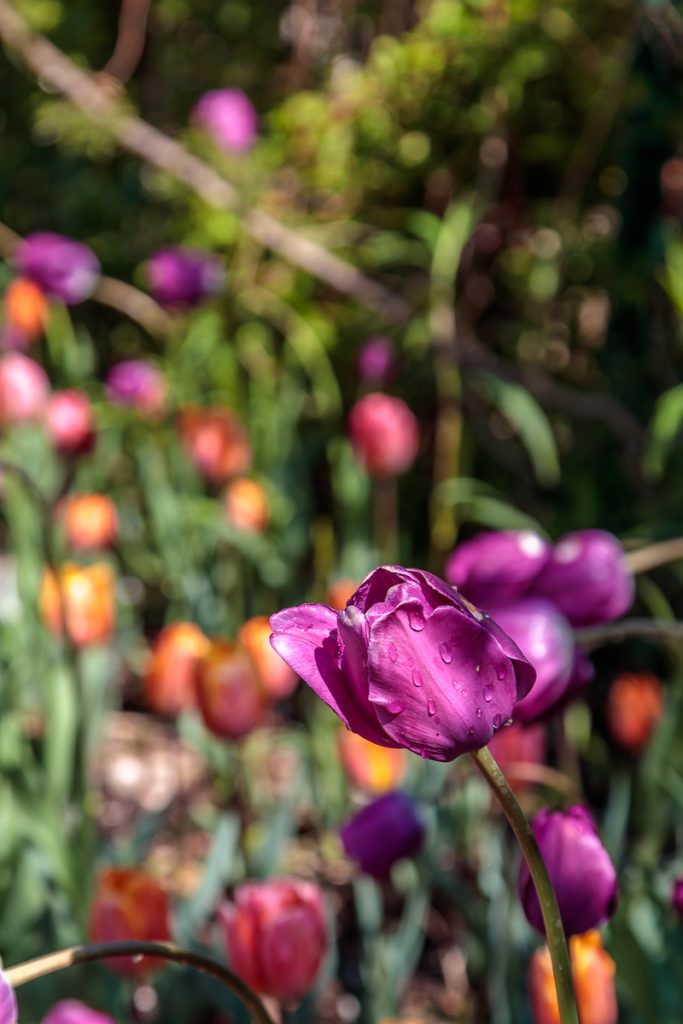 This horse sculpture was originally made of wood.  However, concerned that the wood would deteriorate, bronze castings of each piece of wood were made and treated to look just like the original wood.  Standing right next to it, you couldn’t tell it wasn’t wood. 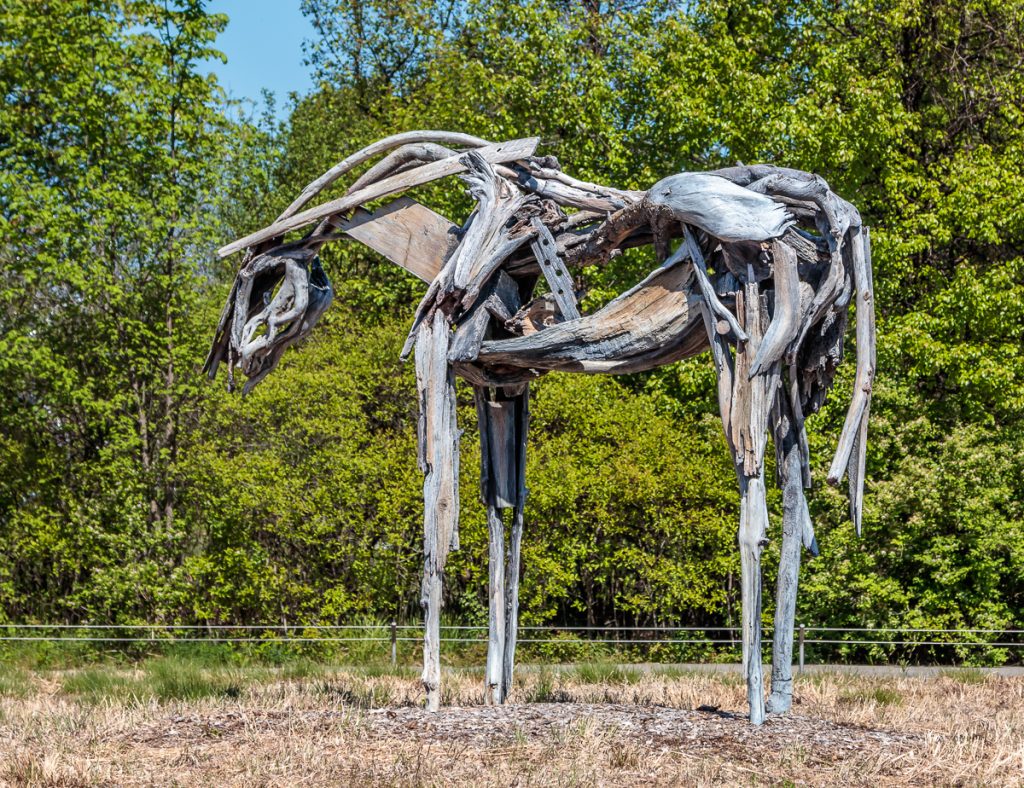 This sculpture changes it’s appearance as you move around it. 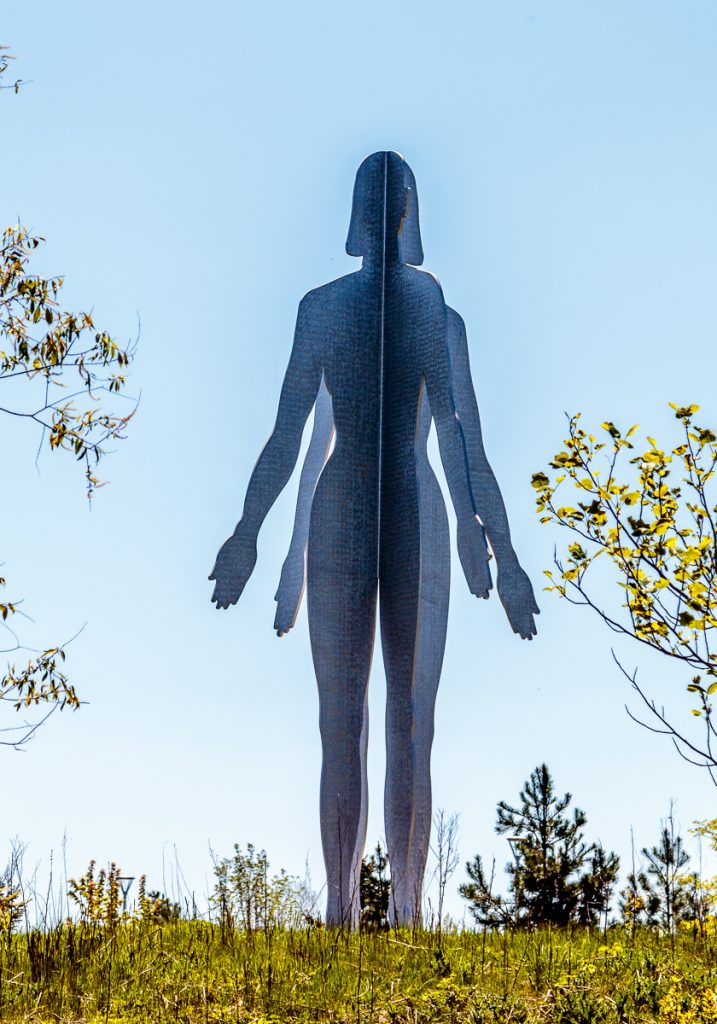 Moving one direction shows a woman. 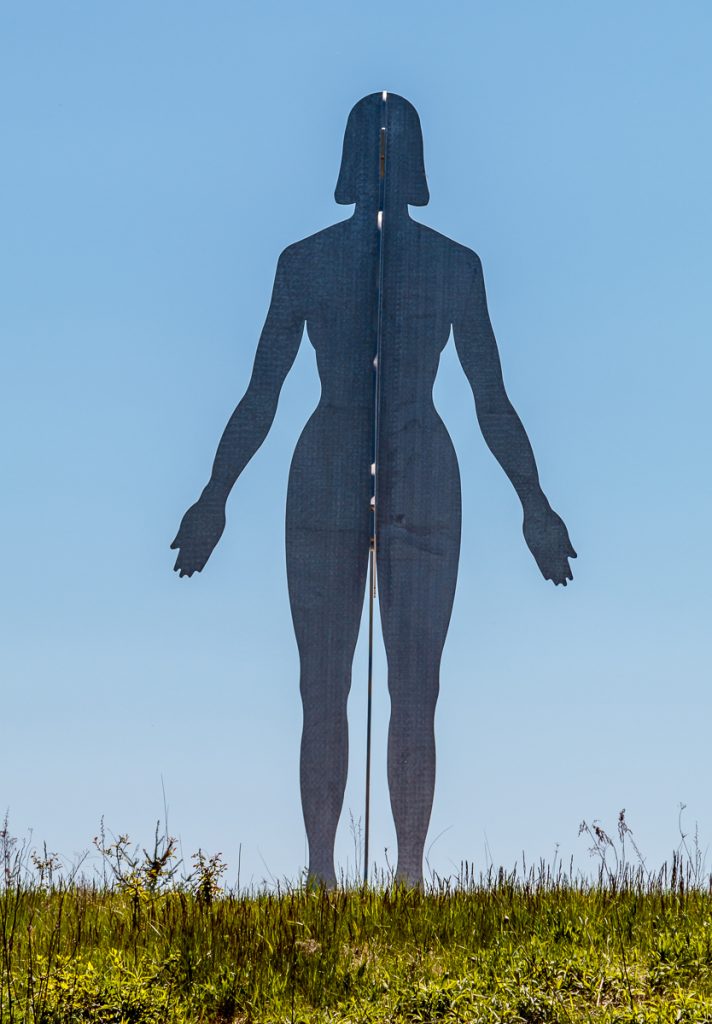 Moving the other direction shows a man. 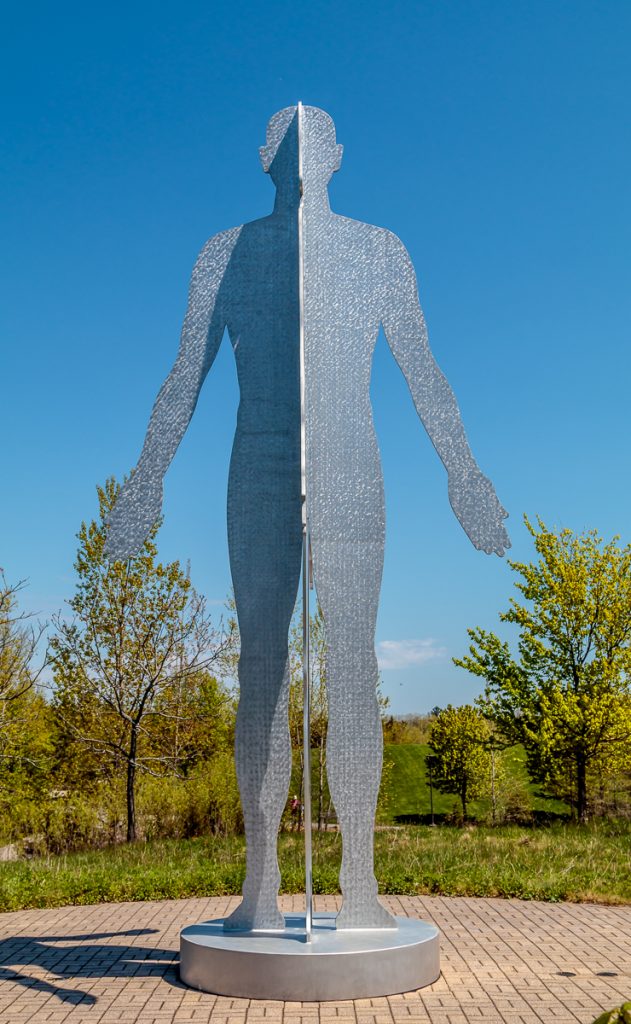 Perhaps one of the best know sculptures in the gardens is Leonardo da Vinci’s horse.  The story is best told from WikiPedia.

Leonardo’s Horse (also known as Gran Cavallo) is a sculpture that was commissioned of Leonardo da Vinci in 1482 by Duke of Milan Ludovico il Moro, but not completed. It was intended to be the largest equestrian statue in the world, a monument to the duke’s father Francesco. Leonardo did extensive preparatory work for it, but produced only a clay model, which was destroyed by French soldiers when they invaded Milan in 1499, interrupting the project. About five centuries later, Leonardo’s surviving design materials were used as the basis for sculptures intended to bring the project to fruition.

Leonardo had made numerous small sketches of horses to help illustrate his notes about the complex procedures for molding and casting the sculpture. But his notes were far from systematic, and none of the sketches points to the final position of the horse, with no single definitive drawing of the statue. Nina Akamu researched multiple information sources to gain insight into the original sculptor’s intentions. She studied both Leonardo’s notes and drawings of the horse and those of other projects he was working on. She reviewed his thoughts on anatomy, painting, sculpture and natural phenomena. Her research expanded to include the teachers who had influenced Leonardo. Akamu also studied Iberian horse breeds, such as the Andalusian, which were favored by the Sforza stables in the late 15th century.

Two full-size casts were made of Akamu’s 24-foot (7.3 m) design. The primary cast was placed at the Hippodrome de San Siro in Milan, and unveiled on September 10, 1999.  The second full-size cast of Akamu’s design became known as The American Horse, which was commissioned by philanthropist Frederik Meijer and was placed at the Meijer Gardens and Sculpture Park on October 7, 1999.

All info on the horse is from WikiPedia. 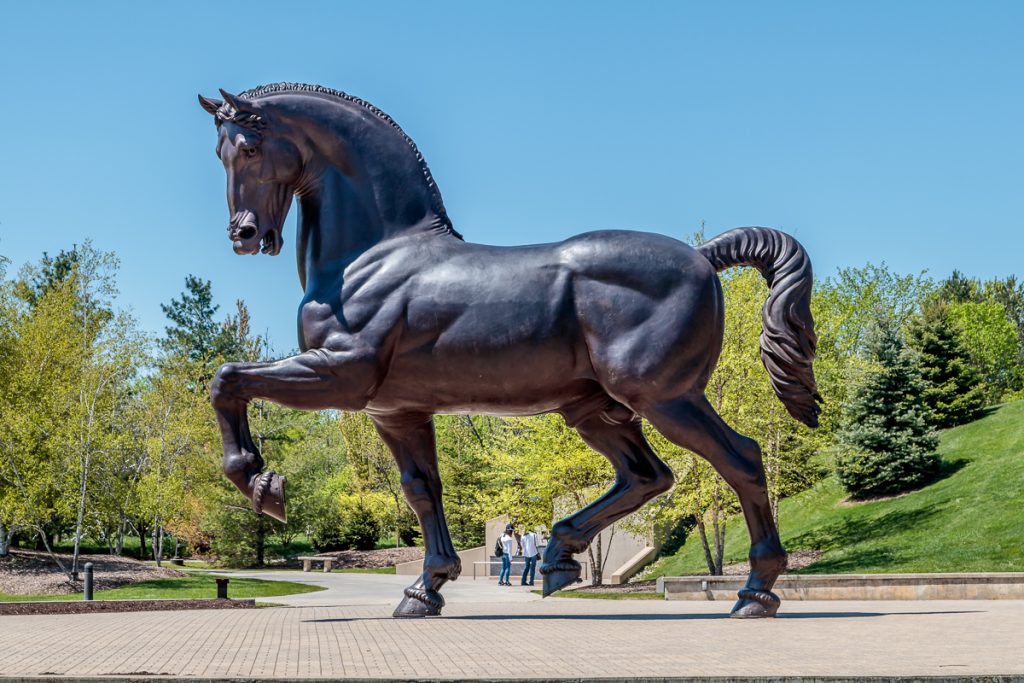 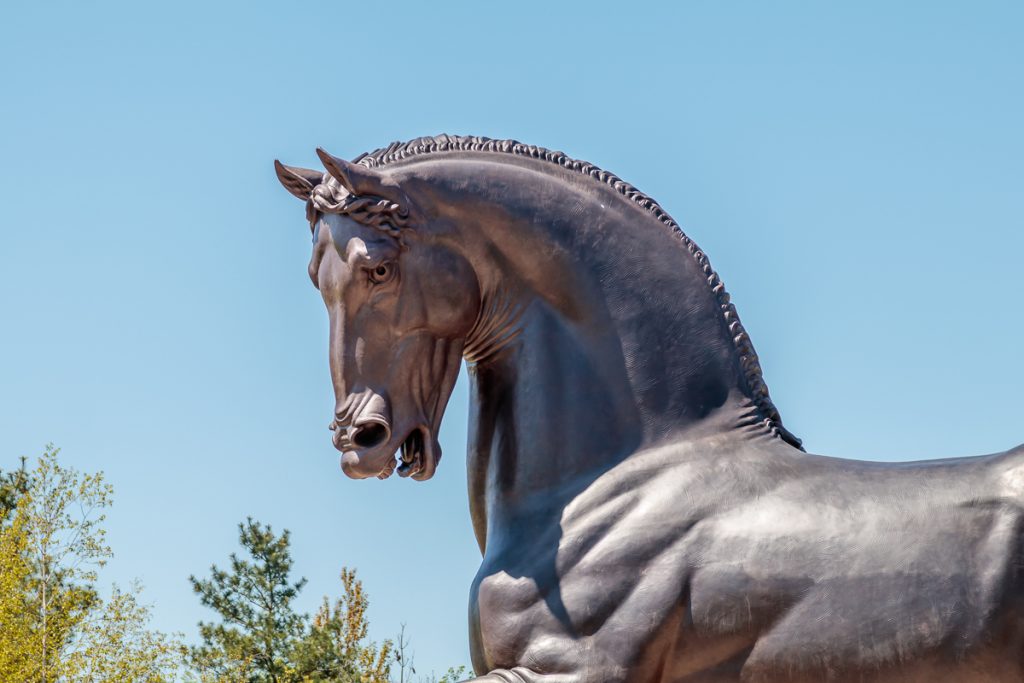 To say that this horse is large is an understatement; it is massive.  Note that it is balanced on two hooves! 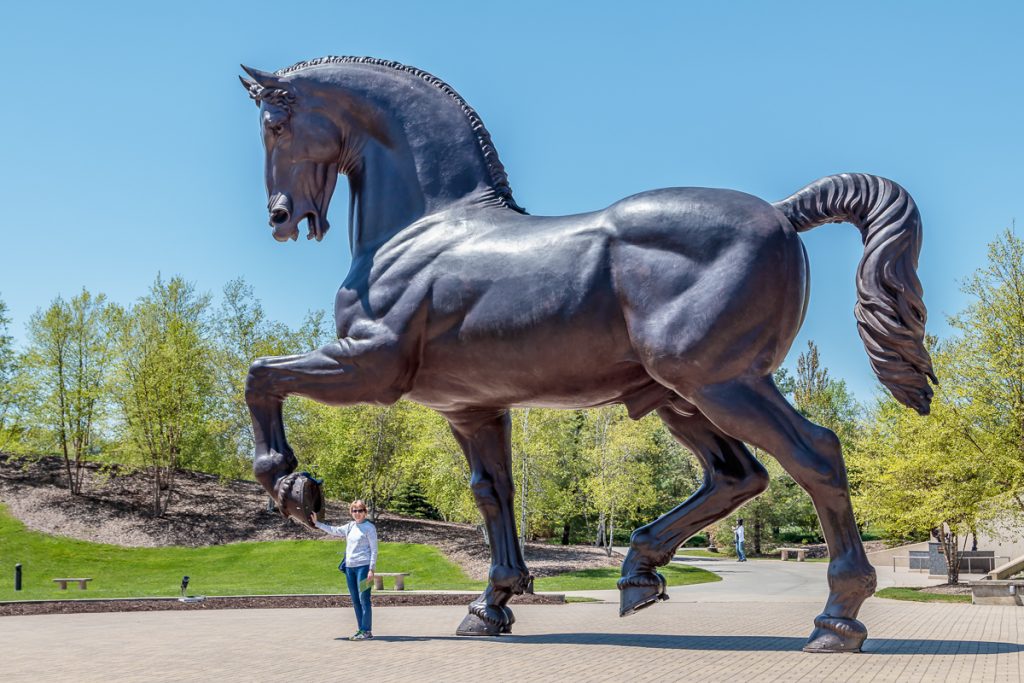 There’s so much more to see at Meijer Gardens such as the Japanese Gardens, the Children’s Garden, and lots more sculptures, but I’ll save that for future posts.

This entry was posted in Southwest Michigan and tagged Sculpture.