We woke up early Wednesday morning (about 5:30) so we could get to St. Peter’s Piazza for the General Audience with Pope Francis.  After a quick breakfast, we headed out into the cool, sunny morning.  It was a great day to wait for the pope.

We approached the colonnade at the edge of the piazza, the lines were already forming.  We had to get through security before entering St. Peter’s Piazza. 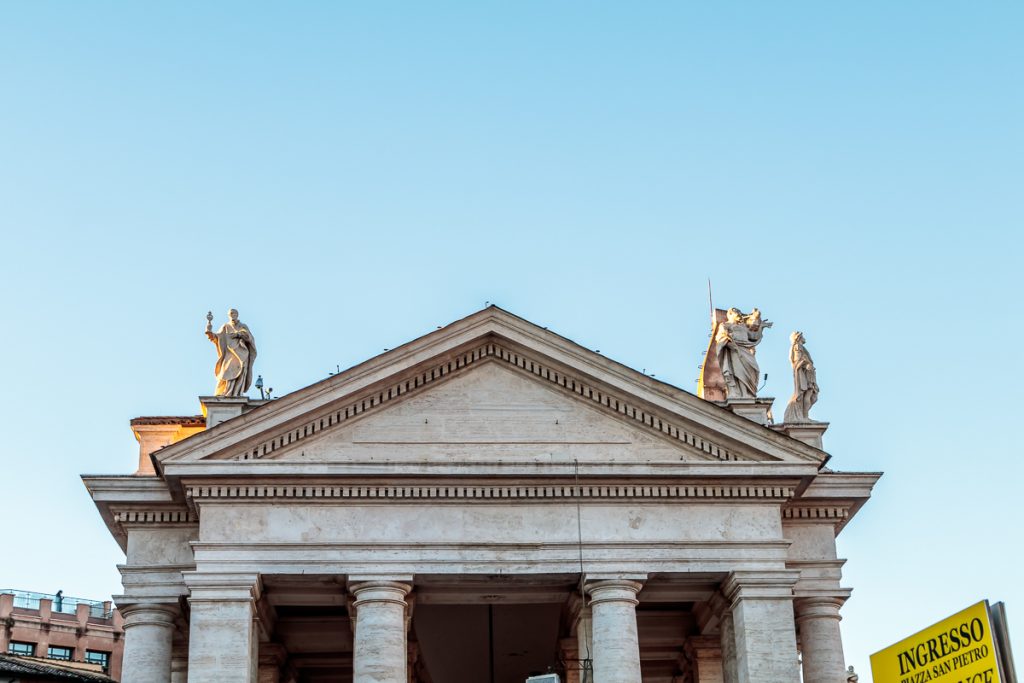 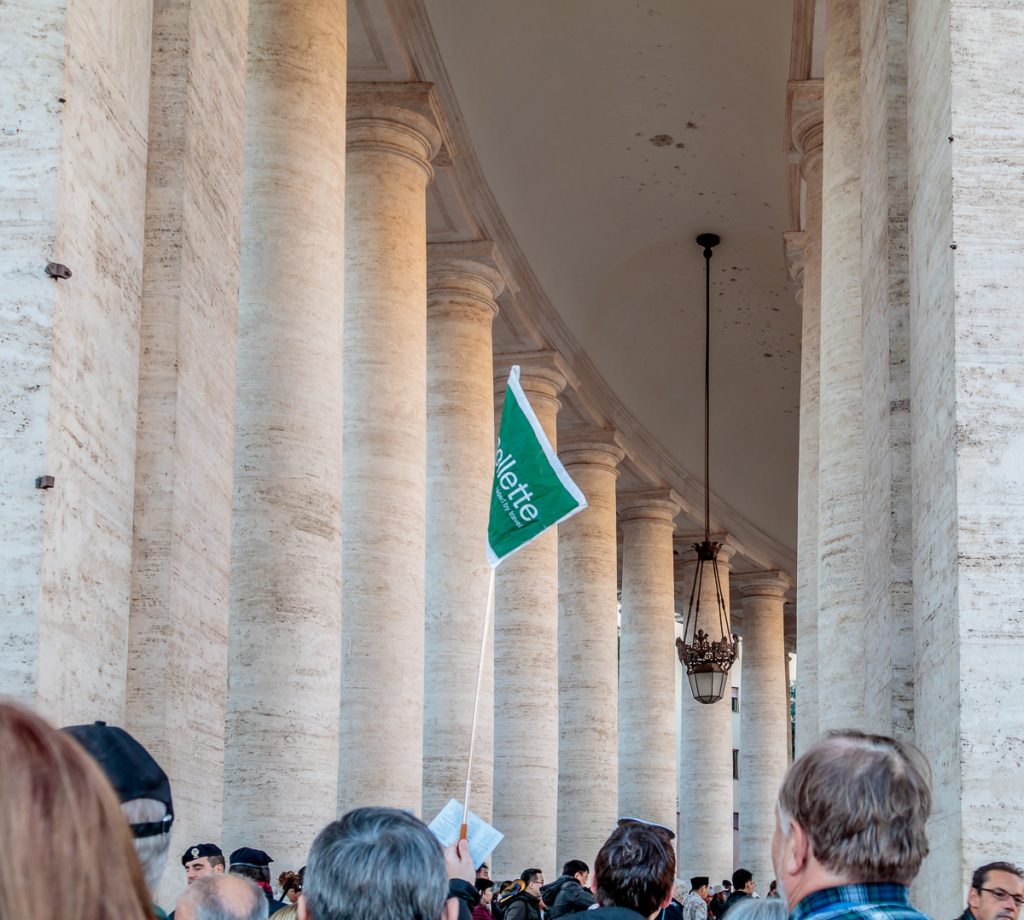 The line moved quickly and along the way we had some great views of St. Peter’s Basilica. 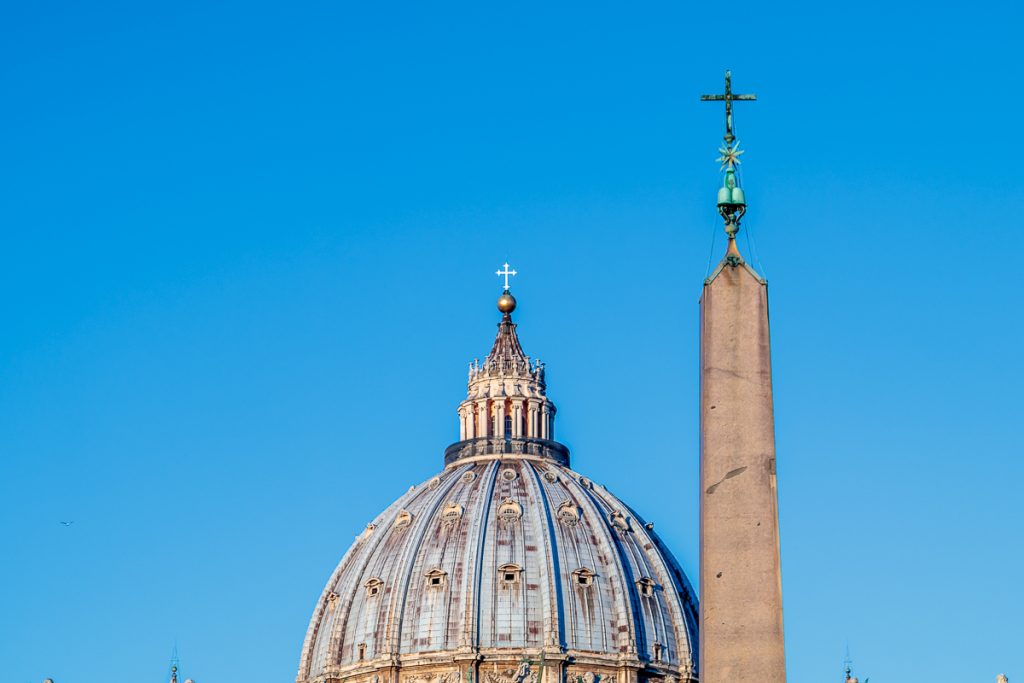 Dome of St. Peter’s and Top of Obelisk 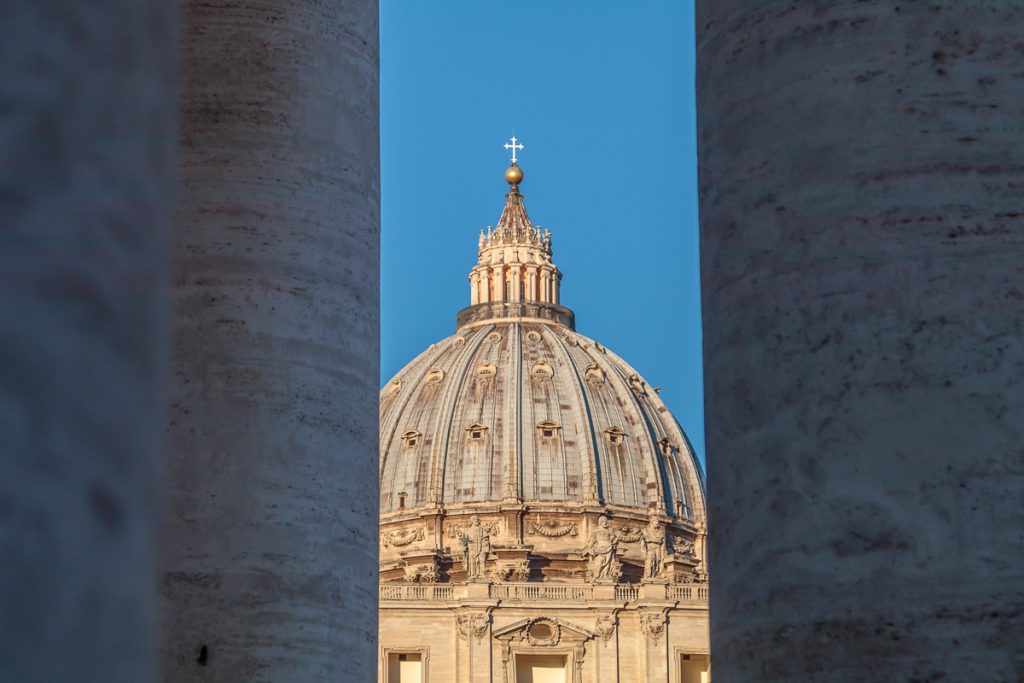 Once through security, we made a dash to get the best seats possible, as close to the edge (along the path the Popemobile would follow) and as close to the front as possible.  My seat was only 4 seats from the edge, a great location.  I had great views of St. Peter’s and to where Pope Francis would pass. 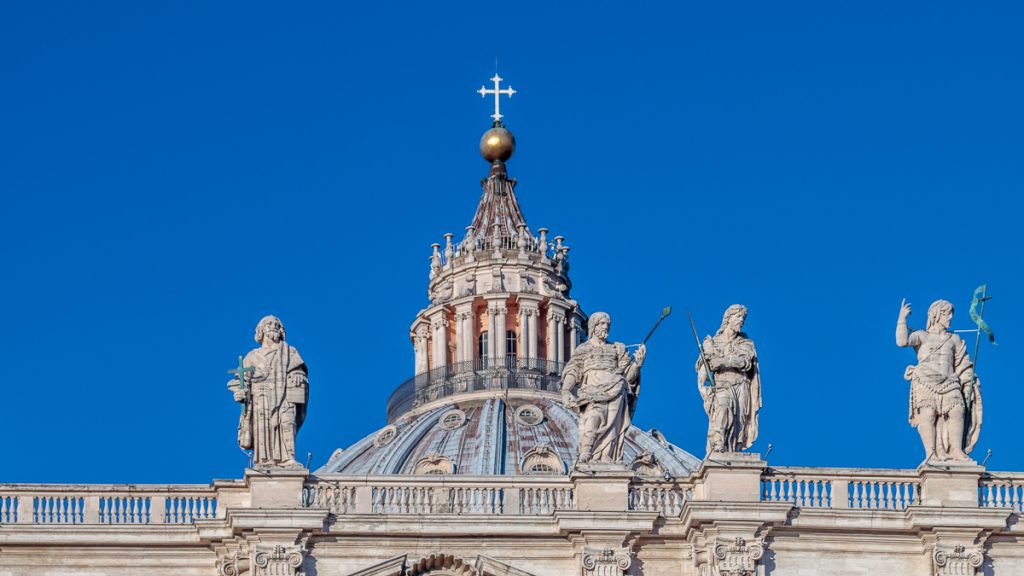 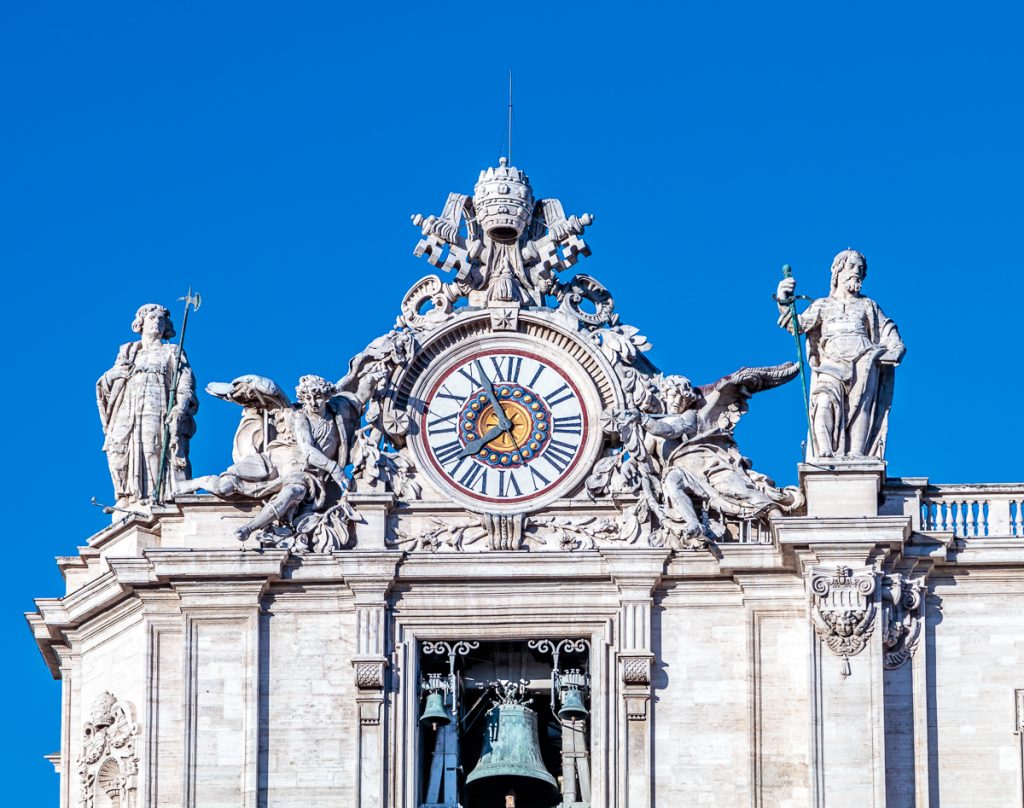 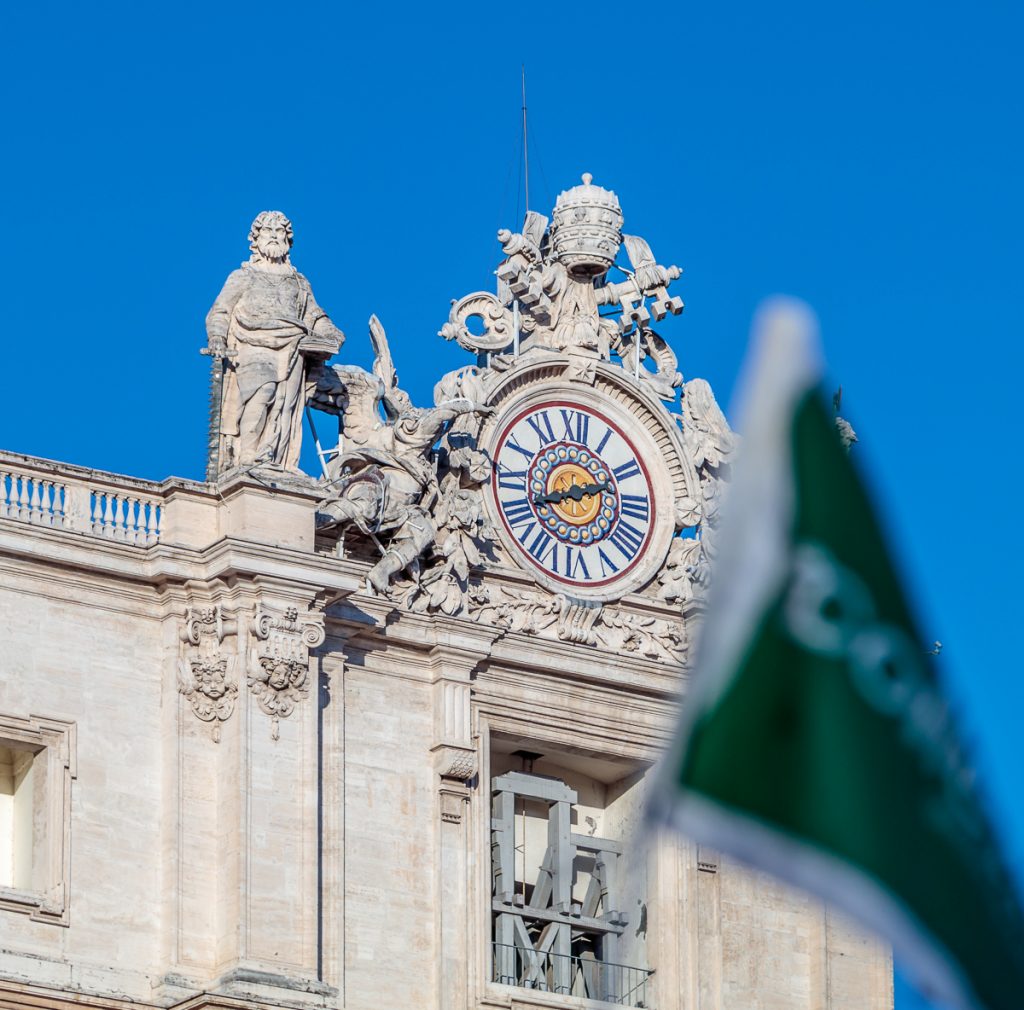 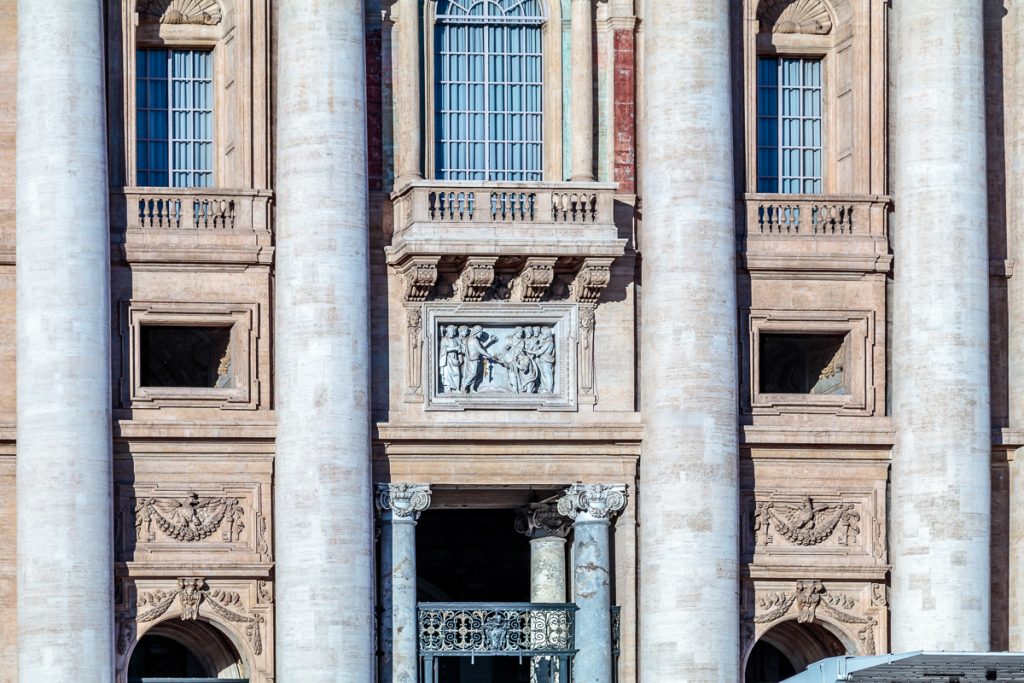 Detail on Facade of St. Peter’s 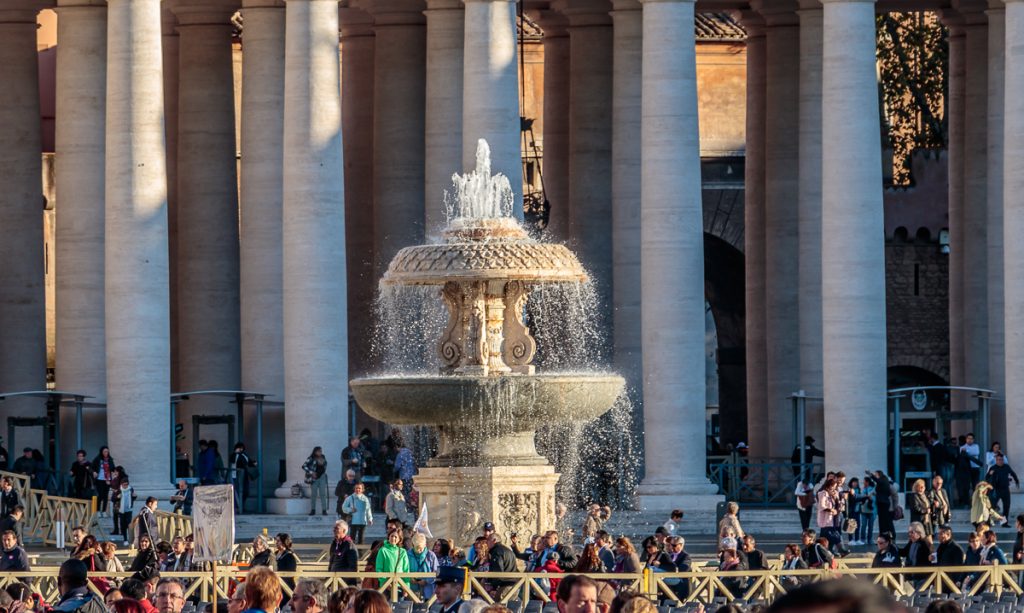 One of Bernini’s Fountain 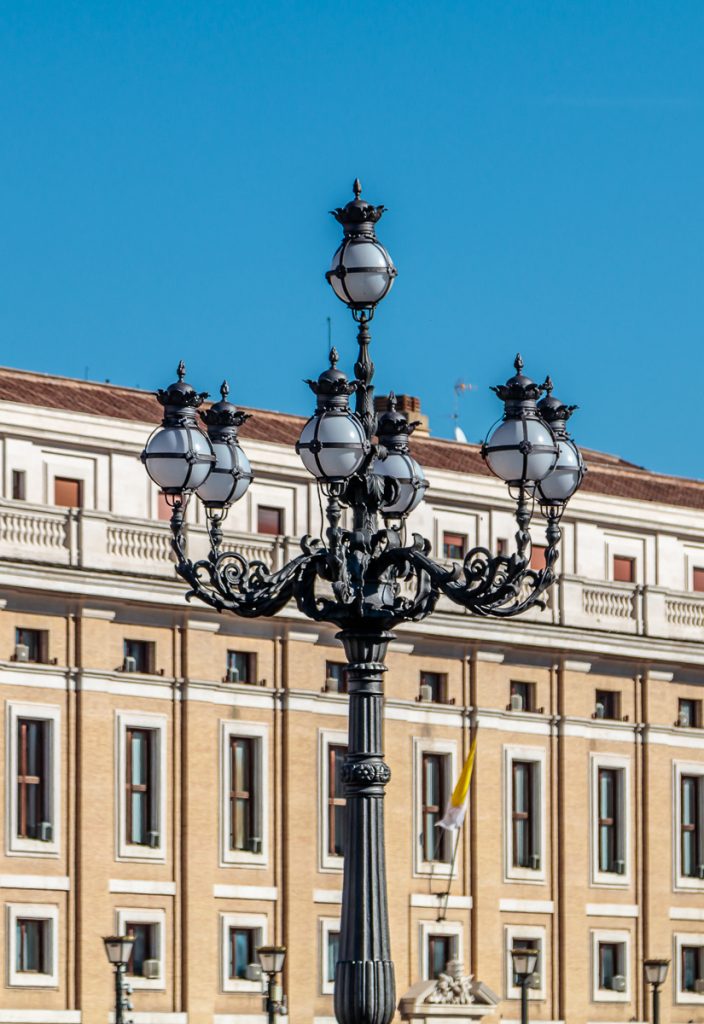 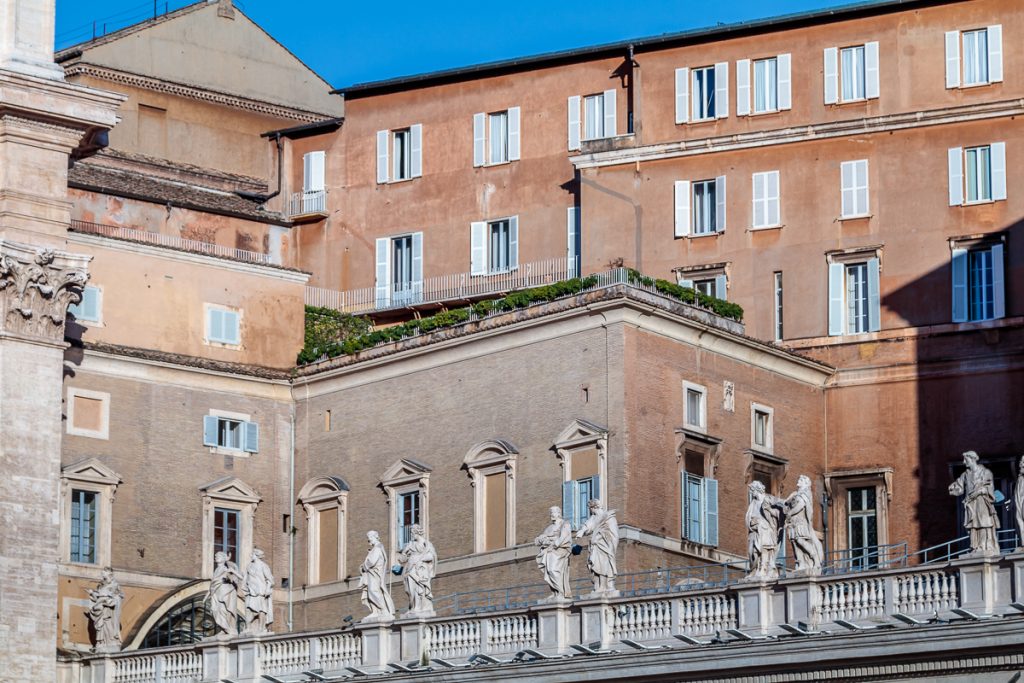 Top of Section of Colonnade 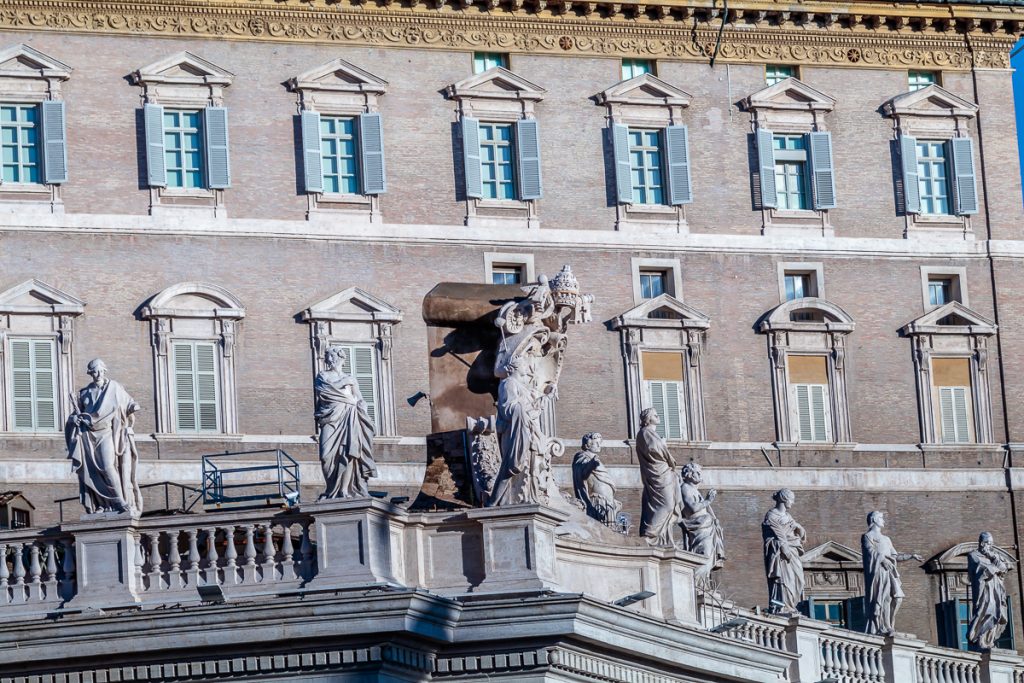 Top of Section of Colonnade

One of the most recent architectural features in St. Peter’s square is the mosaic dedicated to Mary Mater Ecclesiae (Mother of the Church), inscribed with the words Totus Tuus, (Totally Yours), a sign of Blessed John Paul II’s immense affection for our Lady.  In 1980, John Paul II was shot in St. Peter’s square and, as he himself said, his life was preserved thanks to Mary’s protection. As a sign of gratitude, he wanted to put an image of our Lady in St. Peter’s square.  The mosaic (inspired by the Madonna della Colonna from the Constantinian Basilica, the original St. Peter’s Basilica built in the 4th century AD) was installed on December 7, 1981 and, on the following day, after praying the Angelus, Pope John Paul II blessed it. He expressed his desire “that all who come to St. Peter’s square may raise their eyes to Mary, to greet her with filial trust and prayer.”  (http://www.marymotherparish.org/home/?id=14) 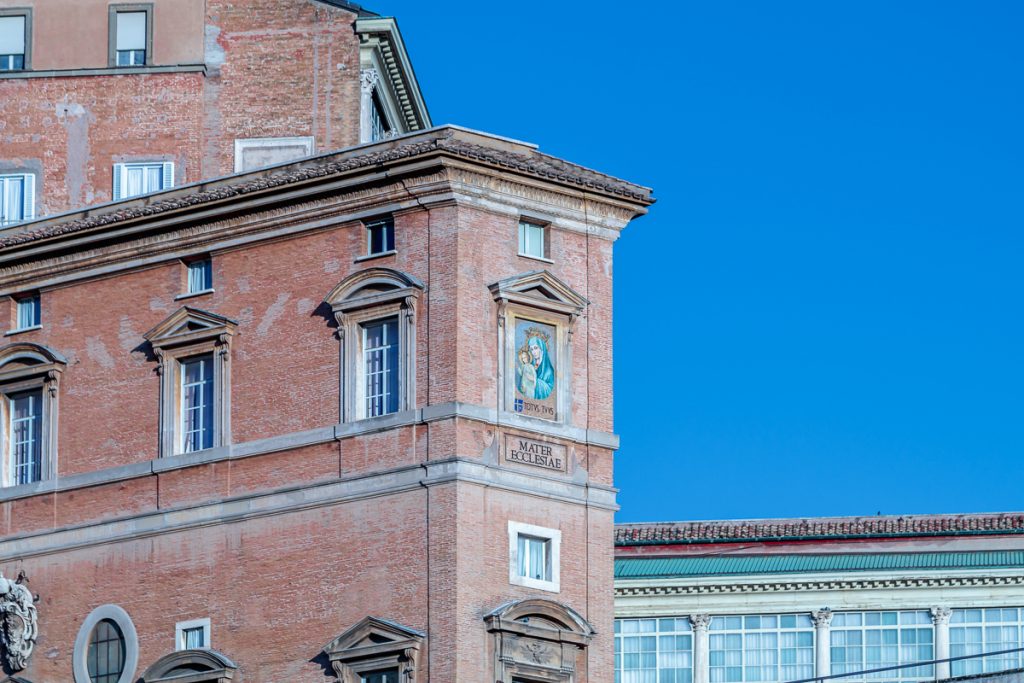 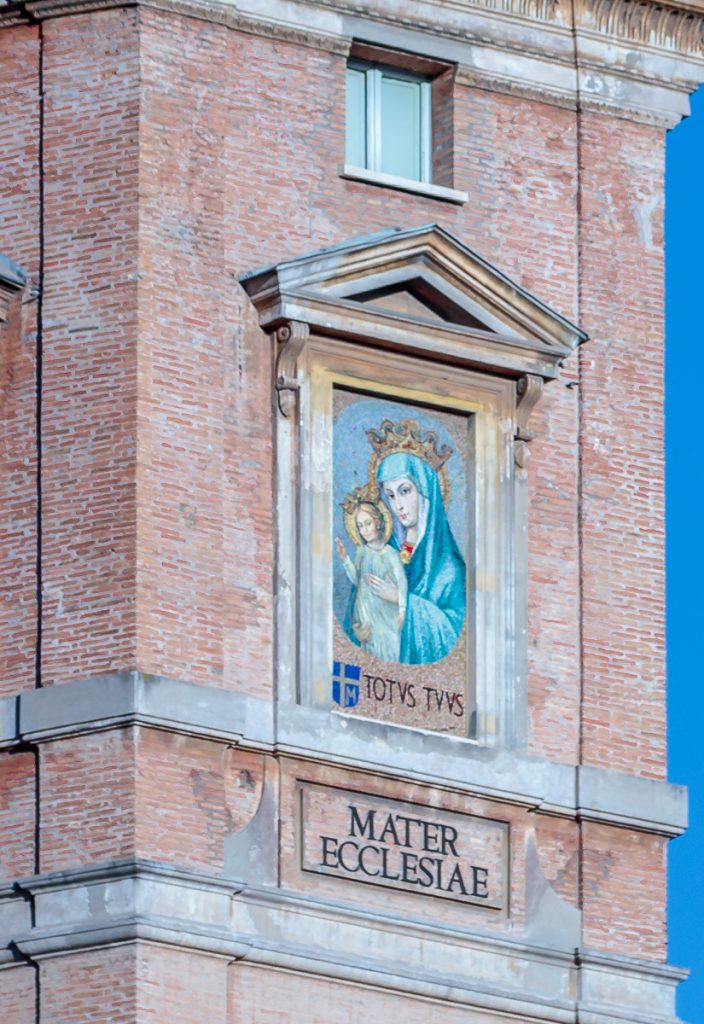 The crowds continued to grow until it seemed that there were people packed together as far as the eye could see. 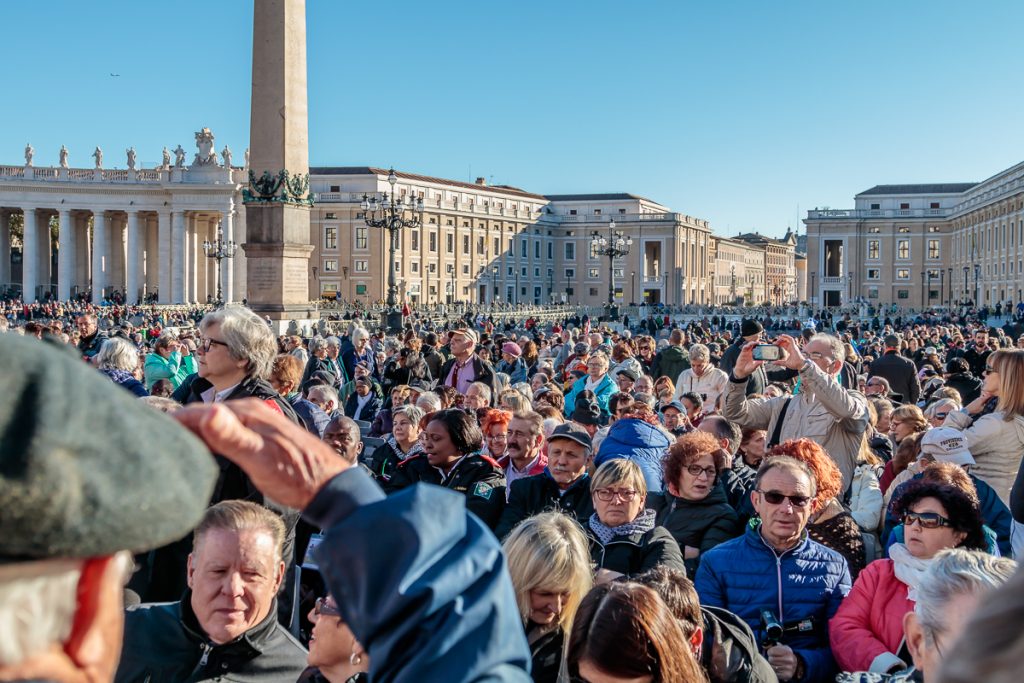 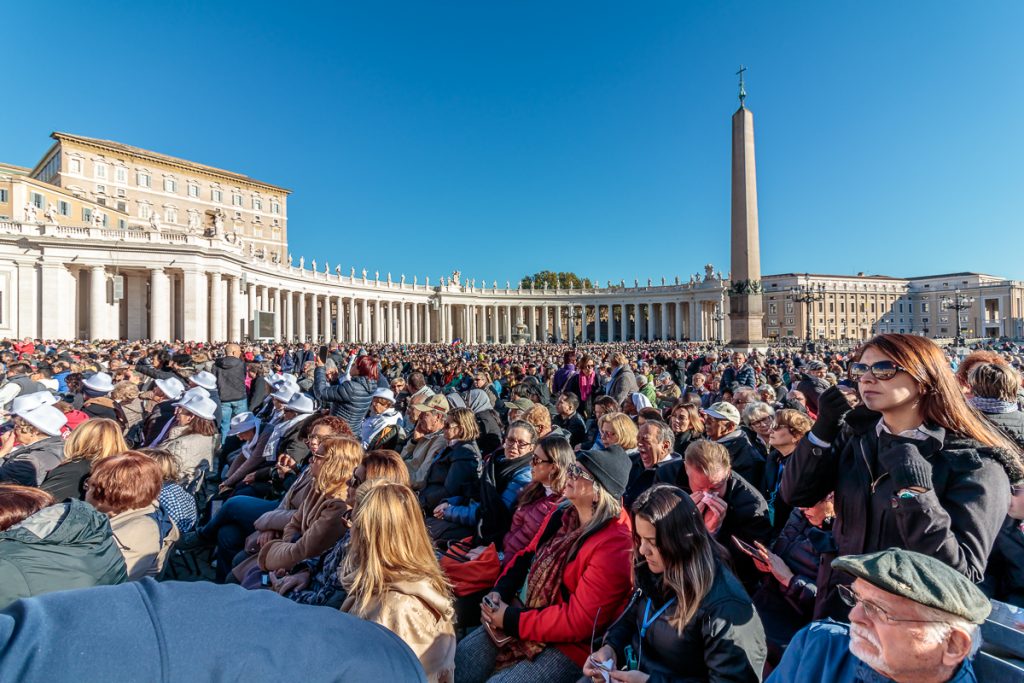 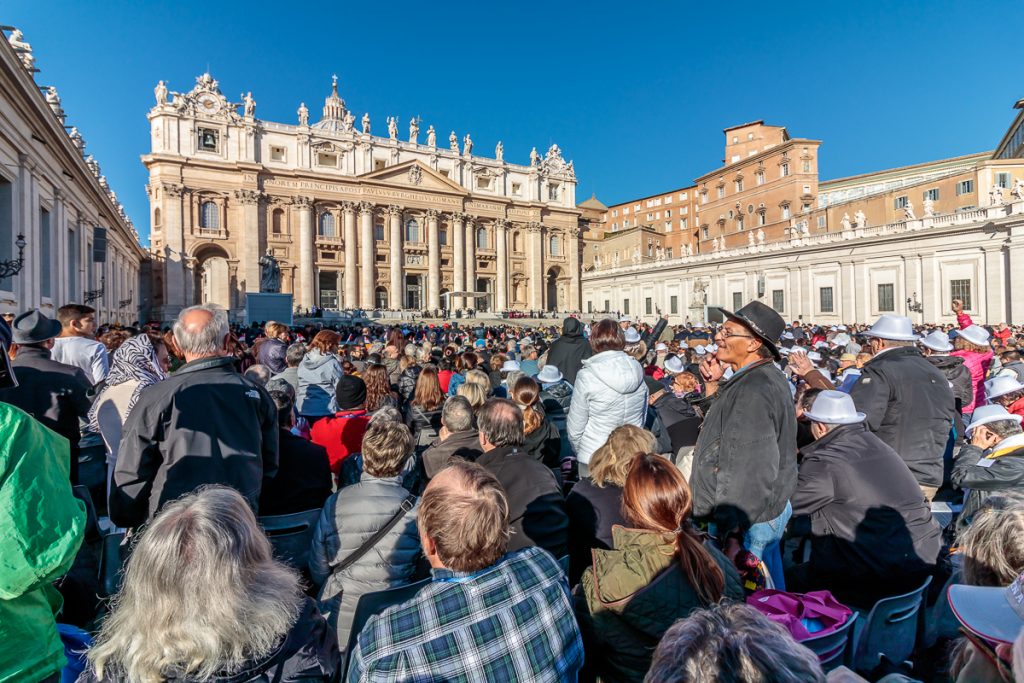 Finally, someone shouted, “Here he comes!”  The popemobile was headed right toward us.  Quick, pack against the fence to get the best view possible. 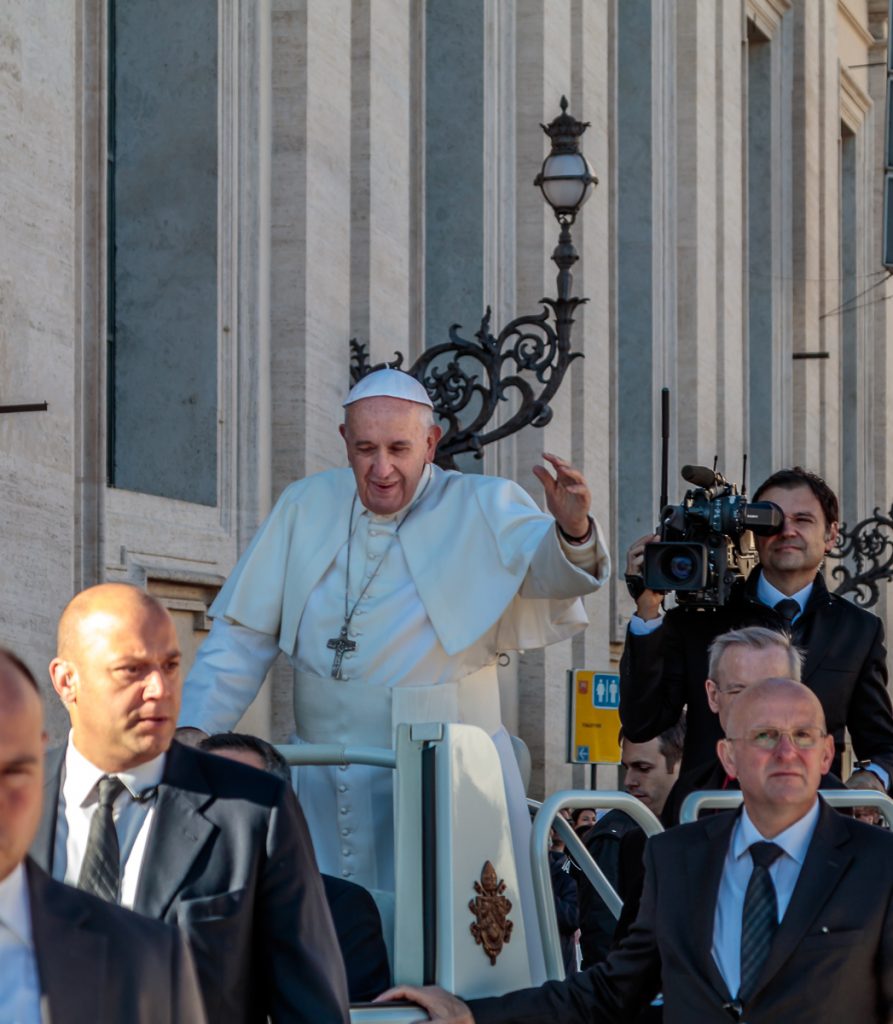 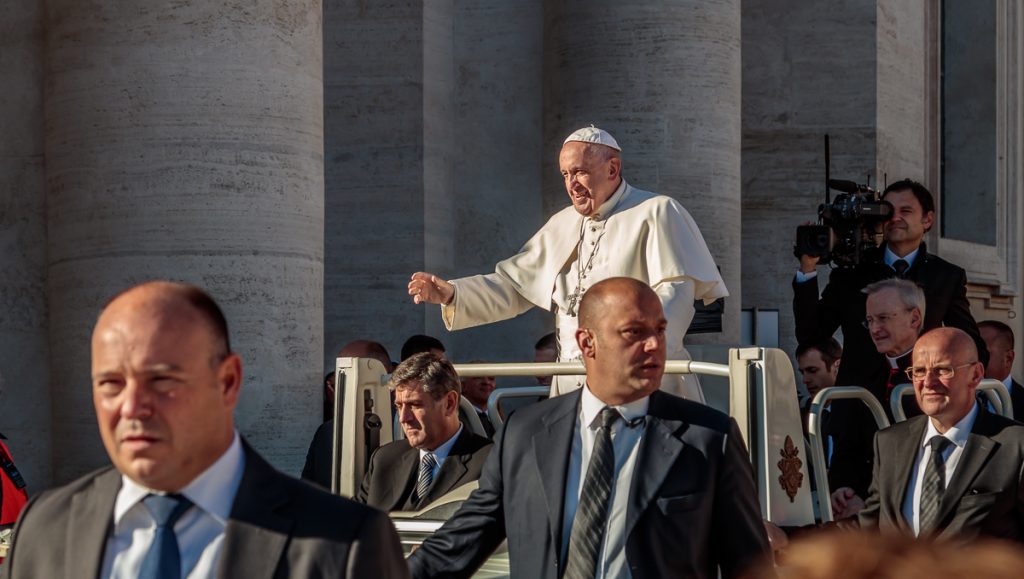 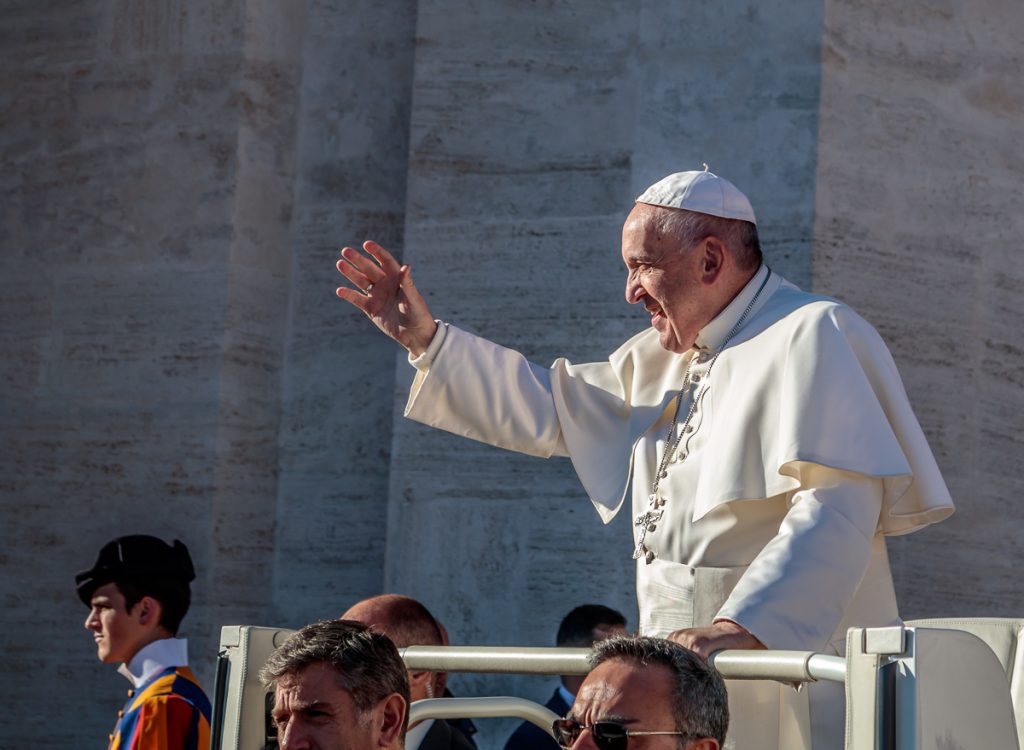 Here he is across the piazza. 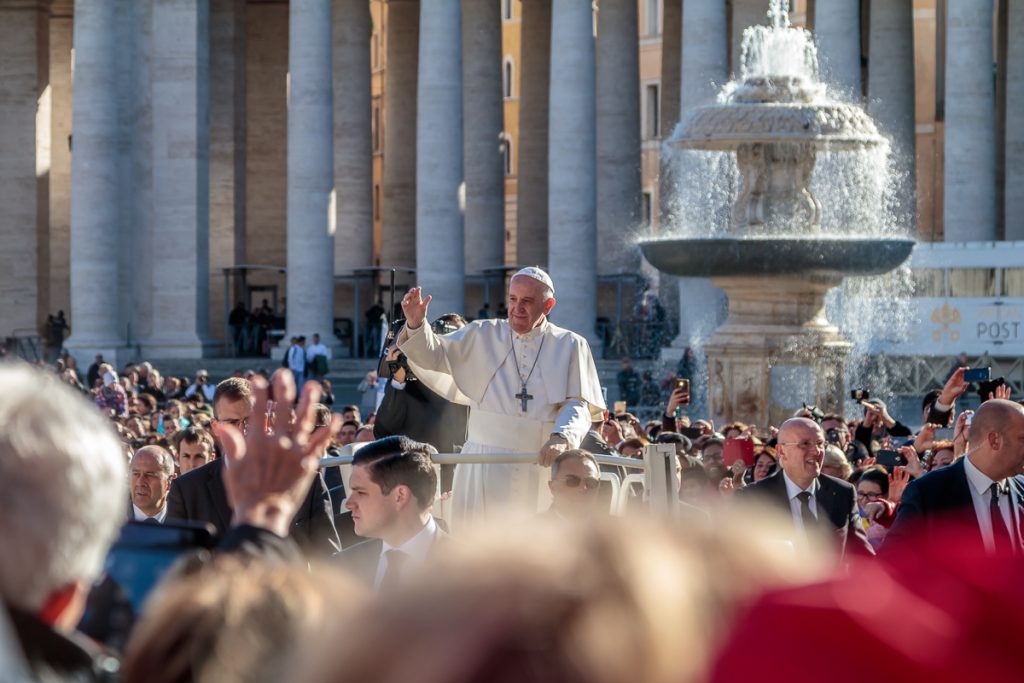 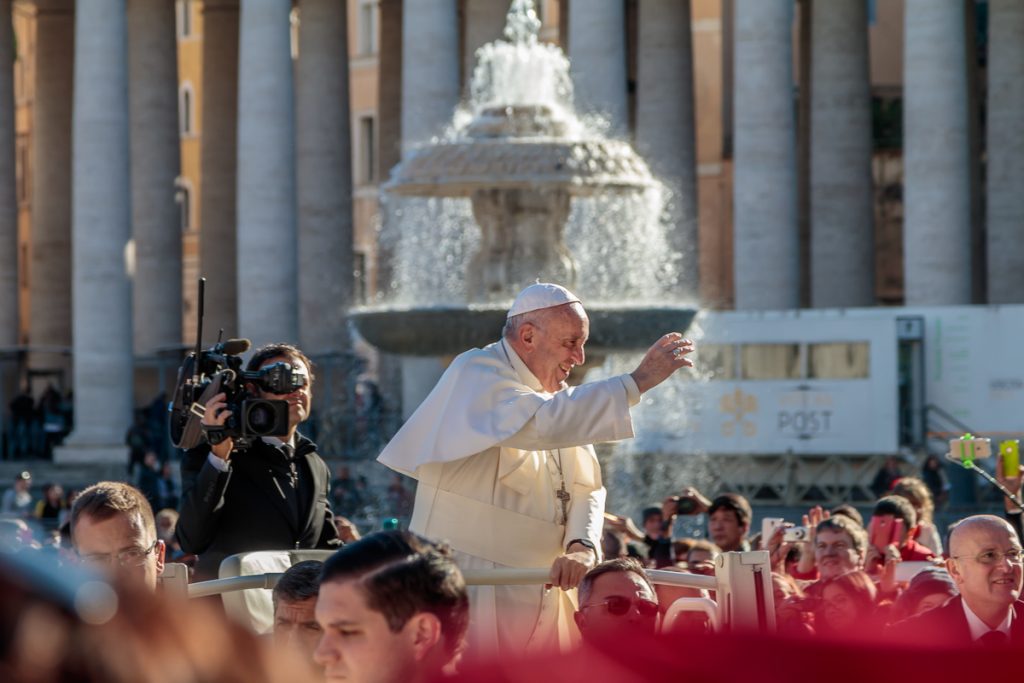 But wait, he’s coming back toward us. 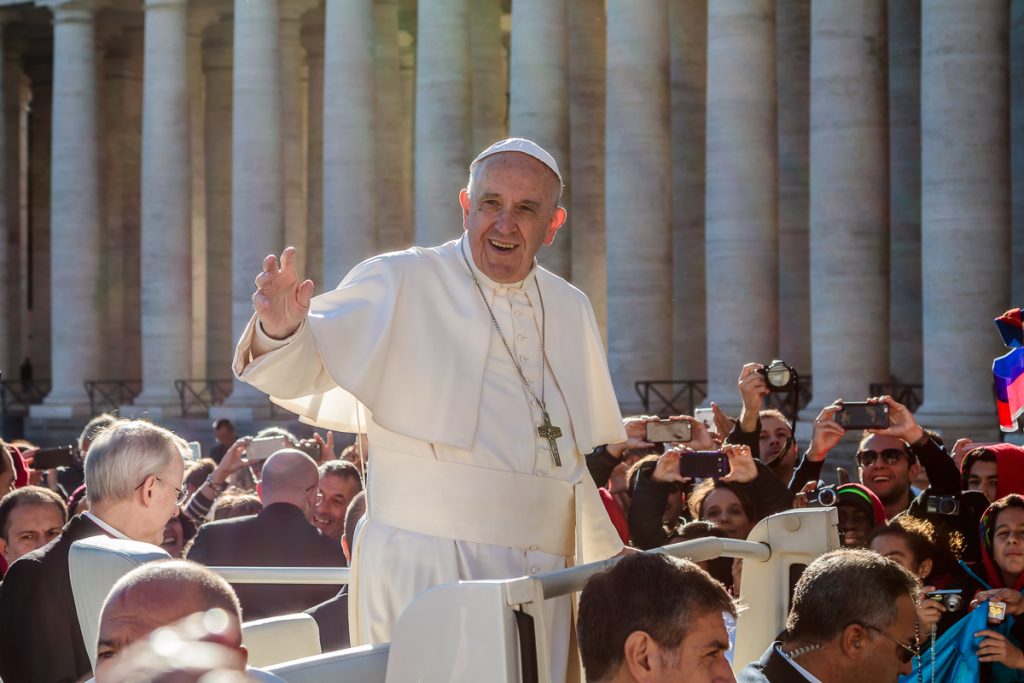 Pope Francis is Coming Back This Way

OK, this is my favorite photo of Pope Francis.  I just missed him looking directly at me.  At ME!  I can’t describe the feeling of having this close encounter with Pope Francis.  I saw Pope John Paul II at one of his last public appearances 11 years ago when he came to a window of the papal apartment.  Although it was wonderful to see him, this encounter was much closer and felt more personal. 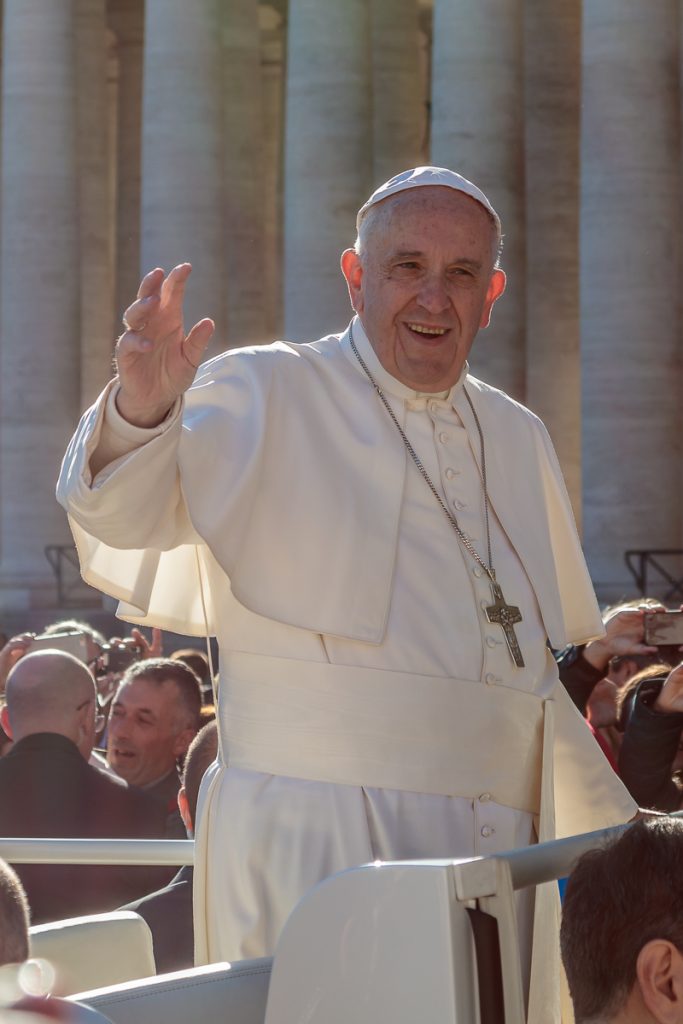 Pope Francis is Coming Back This Way

Here are some photos of Pope  Francis during his comments and other parts of the audience. 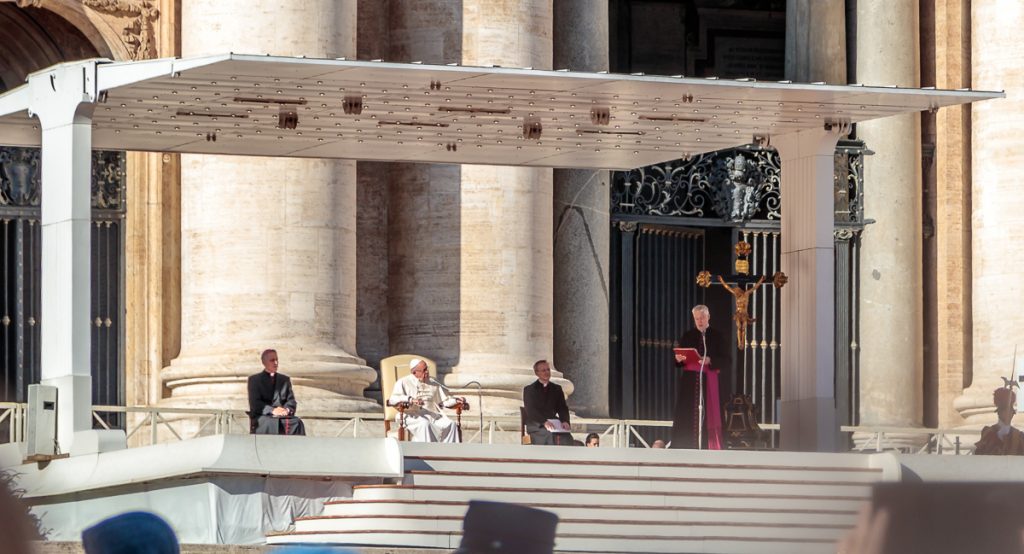 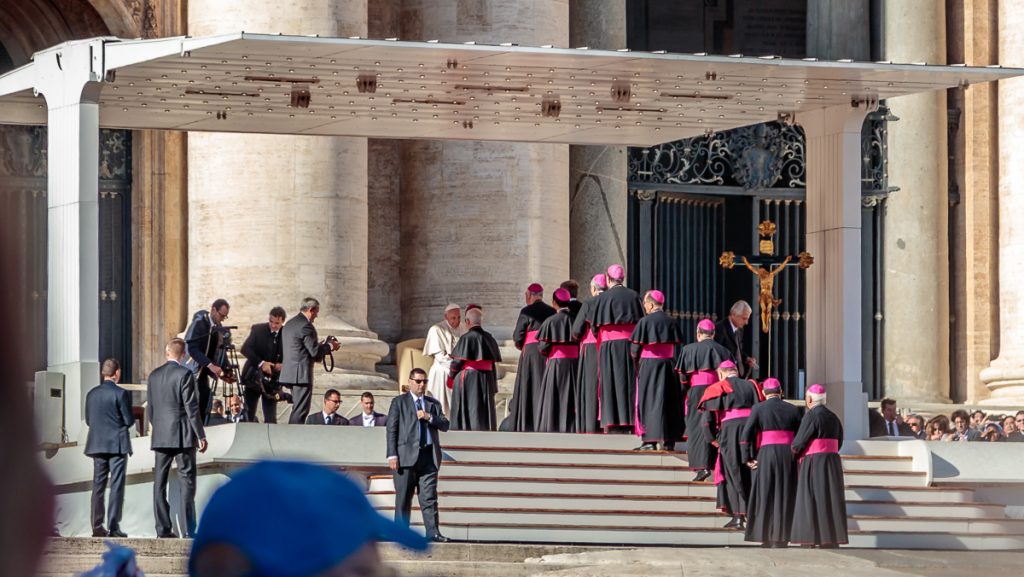 It was a wonderful experience.  If you are ever in Rome and have a chance to attend a general audience, please do not miss it.  Yes, we had to get up early and wait for a few hours, but it was so worth it.

By the way, the entire audience is available for viewing on YouTube at