Well, we’ve seen many of the scupltures, a beautiful stained-glass window, and several paintings and icons from this museum.  There are several other areas of the museum that were quite interesting, containing art and artifacts not described above.

In one room, there were more than a dozen books of music in the form of chants. 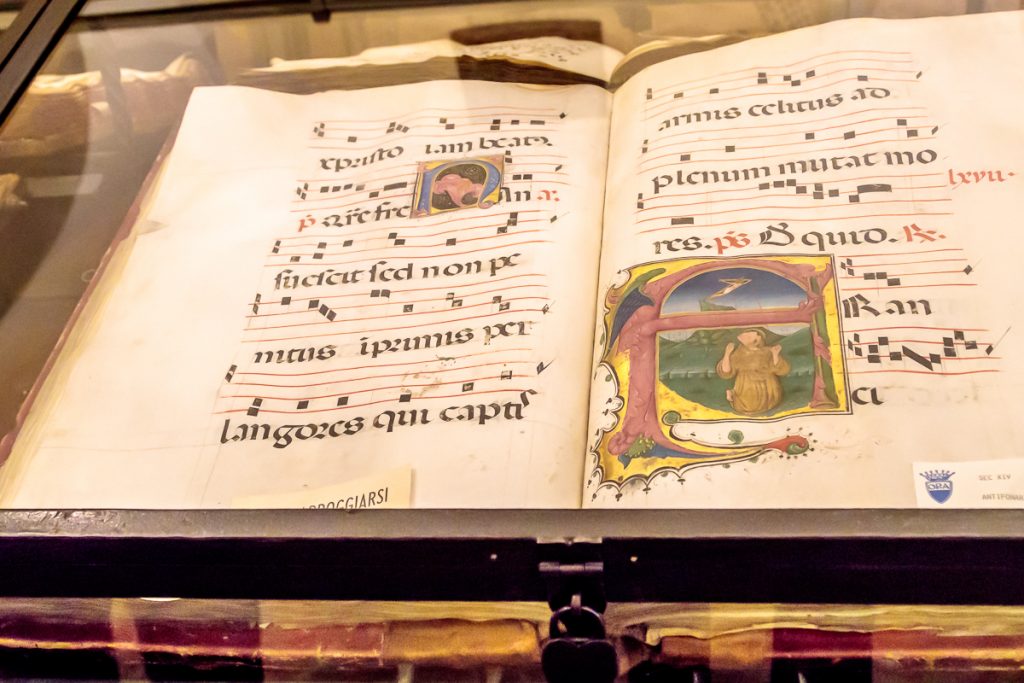 This sculpture, Cristo Risorto, is from 1594. 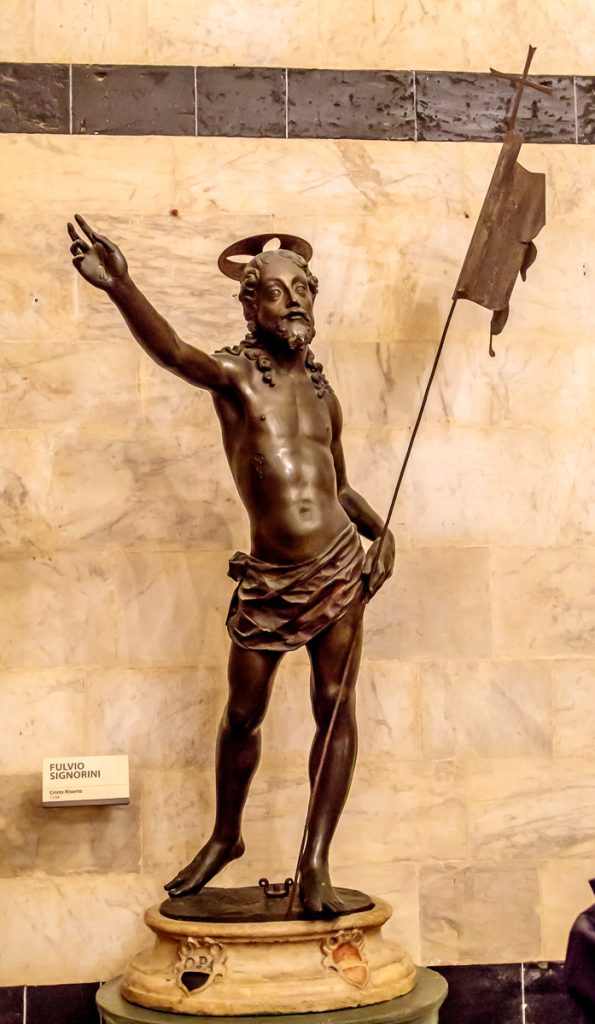 Bronze Statue of the Resurrected Christ

This tapestry contains the same image at was seen on the floor of the Duomo, the zodiac.  The photo is of poor quality because it was shot through glass which contained glare from the lights. 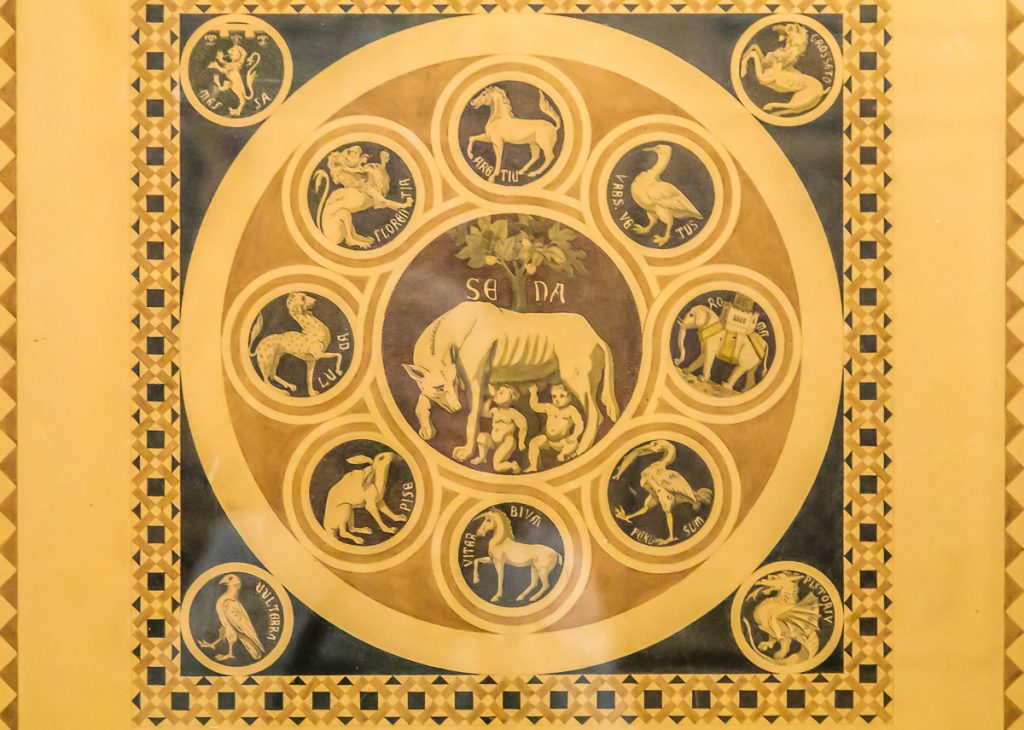 This frame contained text that was printed and formed to fit into the frame.  The center text is titled “Sacrum Convivium” or “Holy Night”.  On the left side it reads “Gloria in excelsis Deo” or “Glory to God in the highest”.  It appears to be the Gloria from the mass.  On the right side, “Credo in unum Deum” or “I believe in one God,” our Creed.  In the center are the words of the consecration “Qui pridie quam pateretur accepit panem…” or “Who, the day before He suffered, took bread…”. 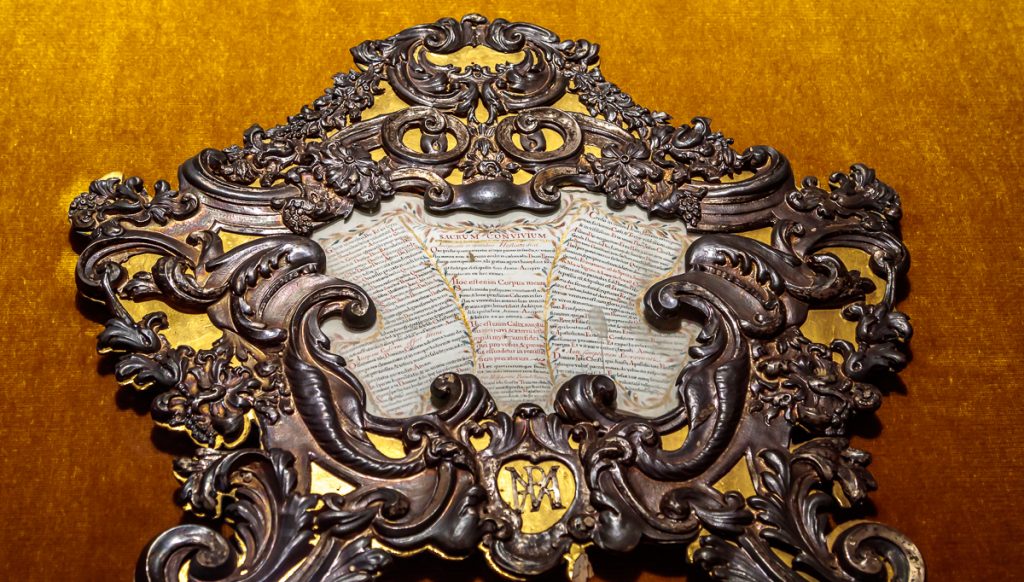 The Golden Rose (1658) is made from bronze gilt, gold leaf, and sapphires.  It rests on a bronze gilt triangular base topped with Chigi coat-of-arms and supported by lions paws.  The rosebush rises and branches out from this; in the fork is inserted the family’s heraldic emblem of a 12-pointed star.  The rosebush has seven main branches, three on the left and four on the right, which contain a total of 19 nationalistically represented flowers and two buds.  The largest rose, at the top in the center, is studded with a cabochon sapphire.  The leaves are all pure gold leaf.  The Golden Rose was donated to Siena Cathedral by Pope Alexander VII in 1658 as a manifestation of regard for his city.  The rose, whose origins date to the Middle Ages, is a very important and sacred gift and can be blessed only the pope.  It was sent as a sign of special appreciation to churches, cities, rulers, or sovereigns who had earned the gratitude of the Holy See. 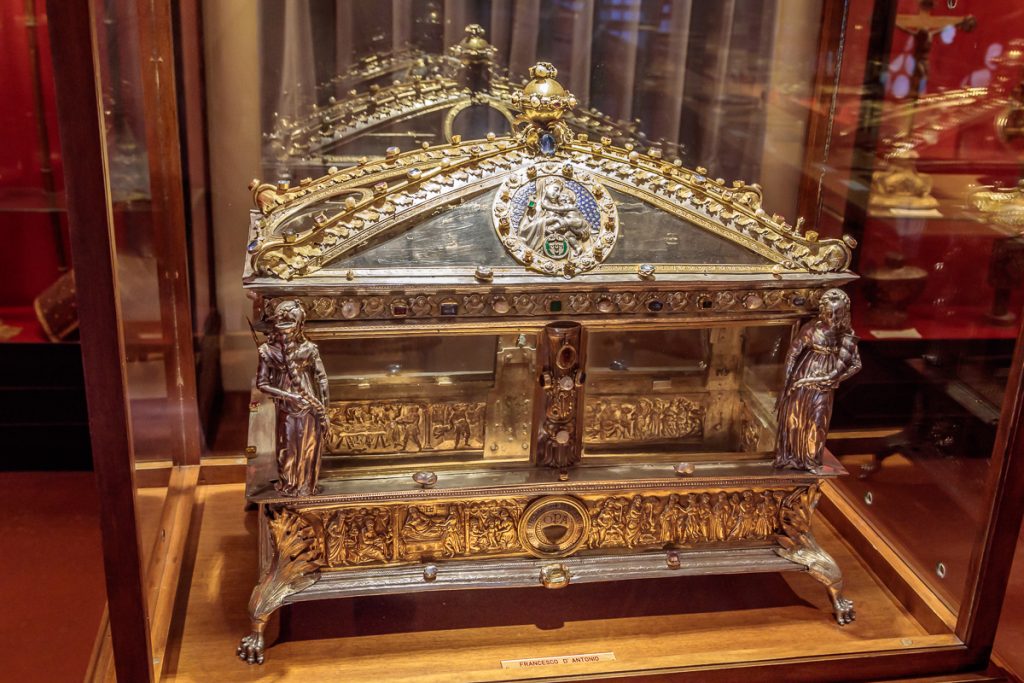 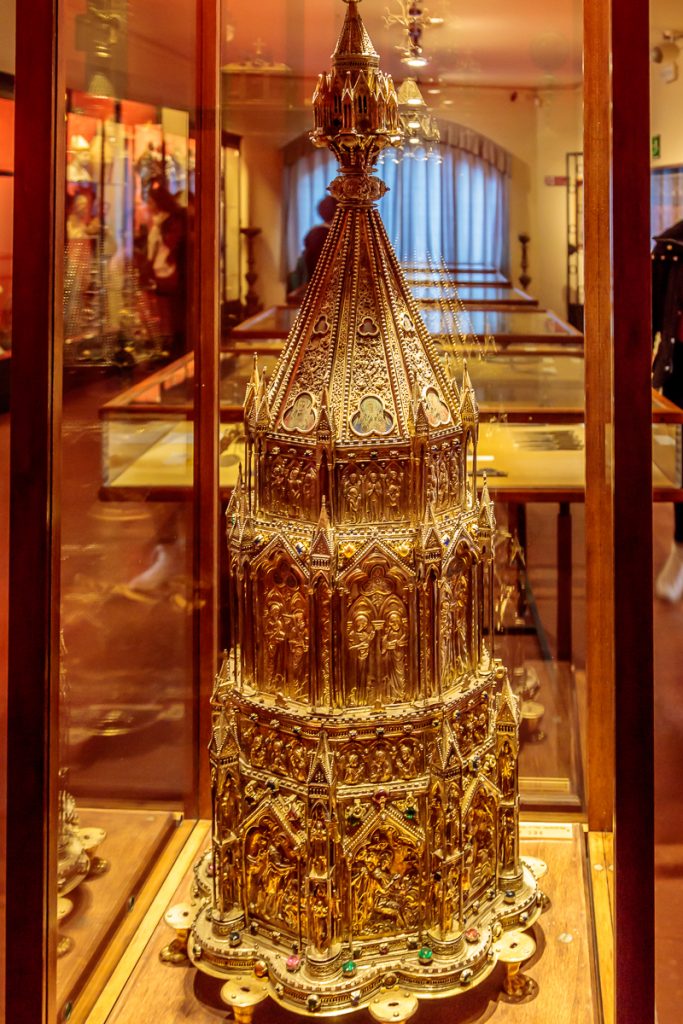 Note the skull  in this reliquery.  There were more bones in there. 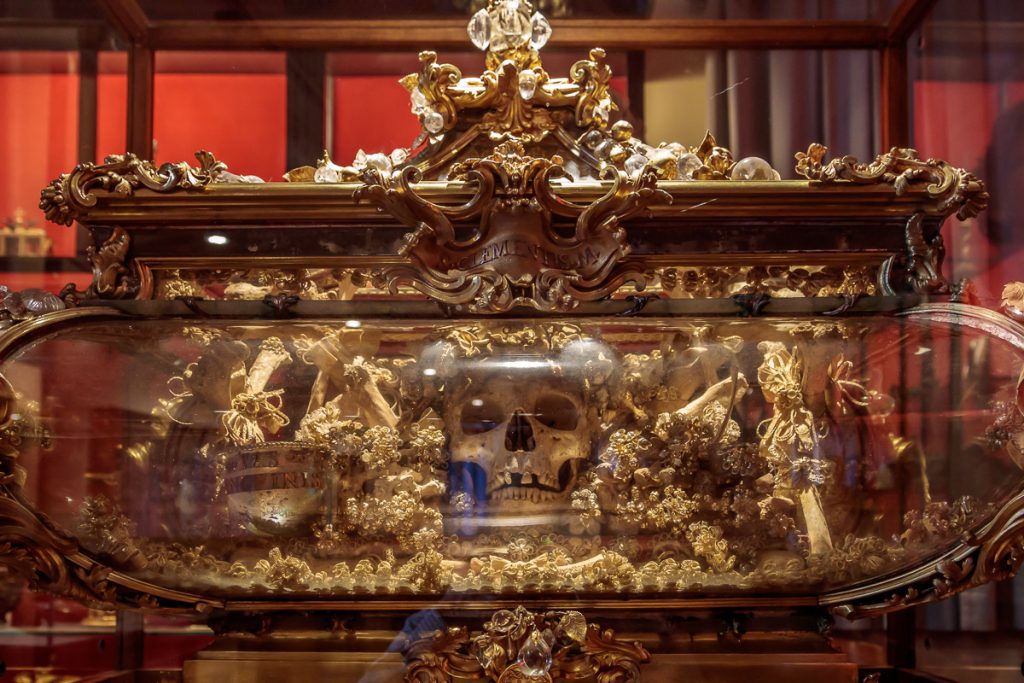 This one contains only the jaw bone of Saint Ansano, one of the partons of Siena. 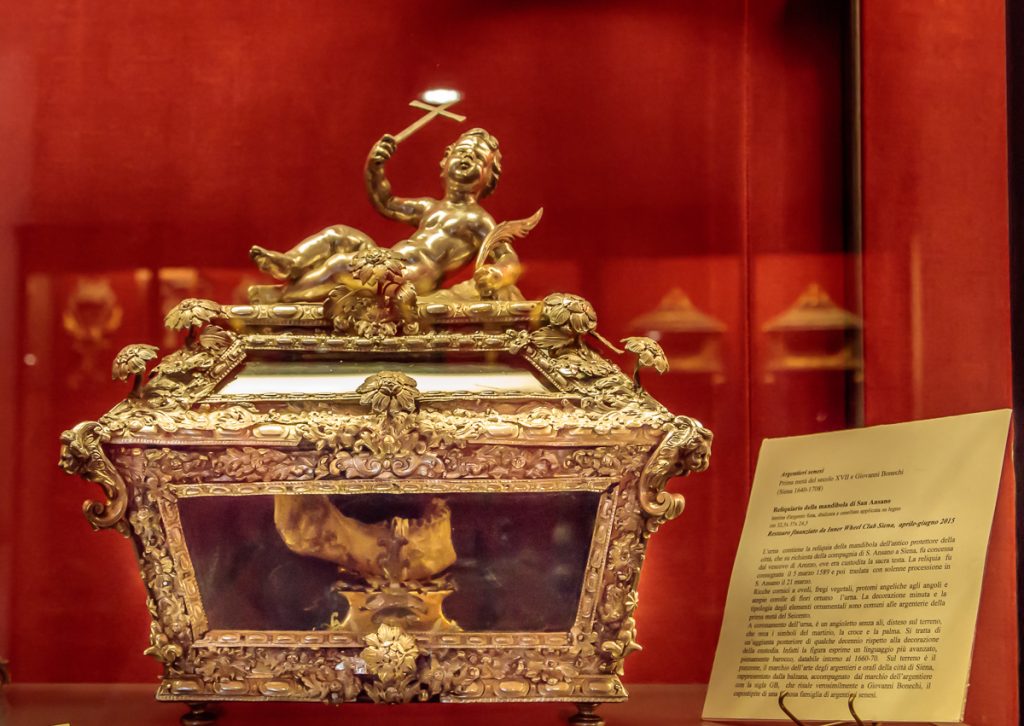 These gold staffs were about 6 feet long. 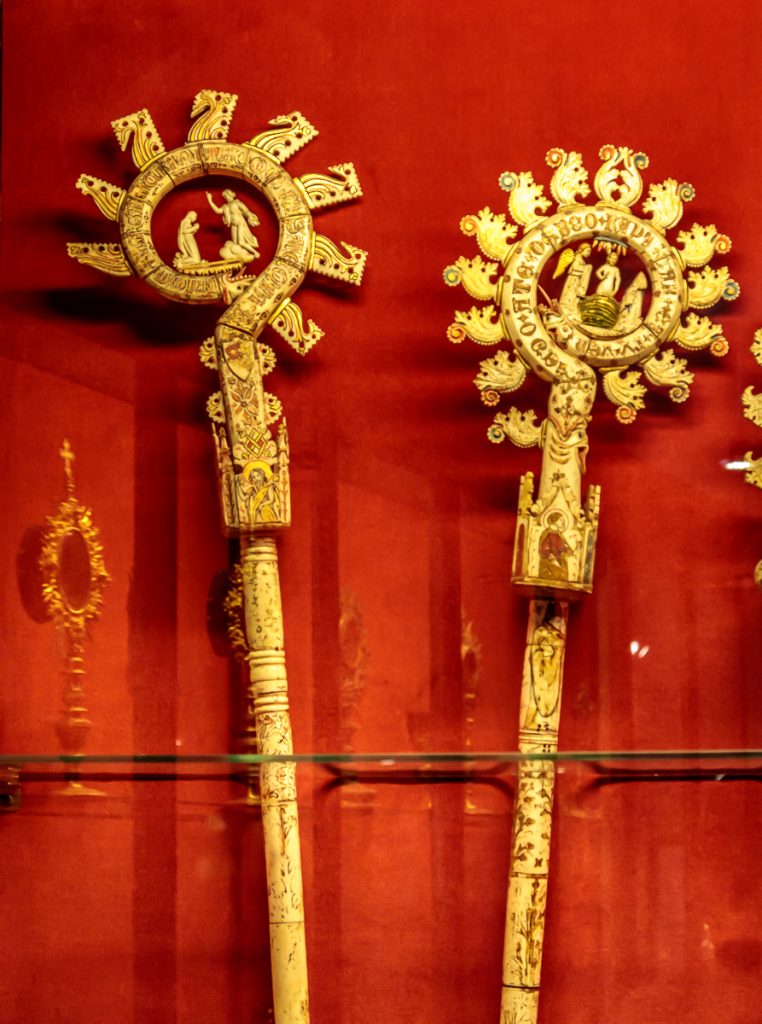 In the gift shop, I looked up to see a beautiful ceiling.  As I’ve said, art is everywhere. 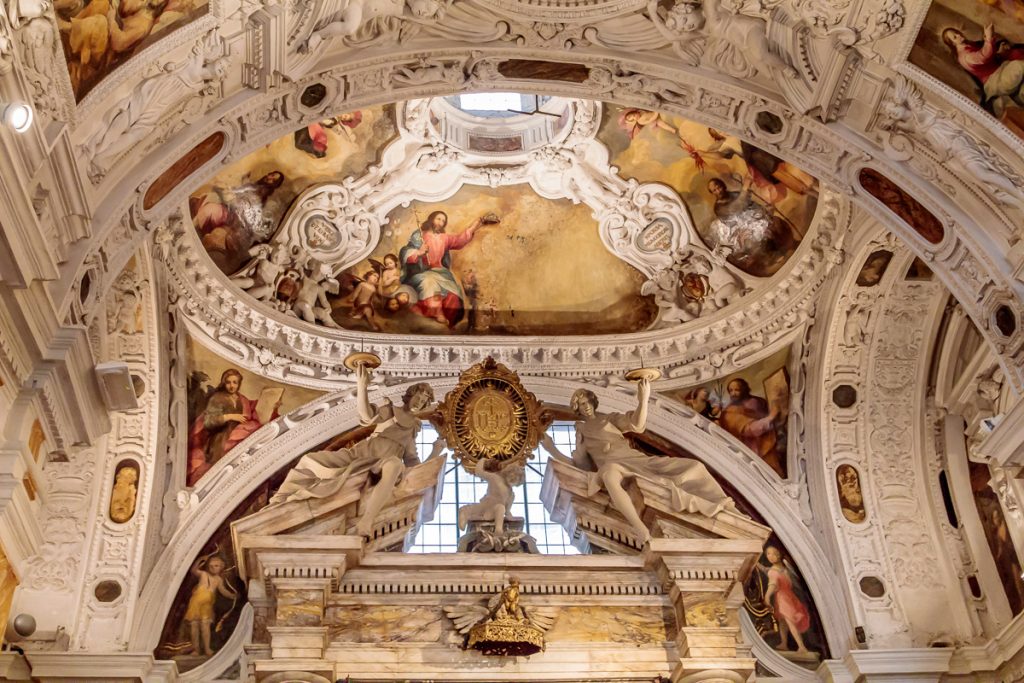 Ceiling of the Gift Shop

Ceiling of the Gift Shop

I highly recommend this museum if you are in Siena.

This entry was posted in Travel and tagged Italy, Museum, Siena.