The Galleria dell’Accademia di Firenze (Gallery of the Academy of Florence) is an art museum in Florence, Italy, and the home of Michelangelo’s sculpture David and many other wonderful pieces.  When we walked into the first gallery, the first thing we saw was the tall statue, The Rape of the Sabine Women. 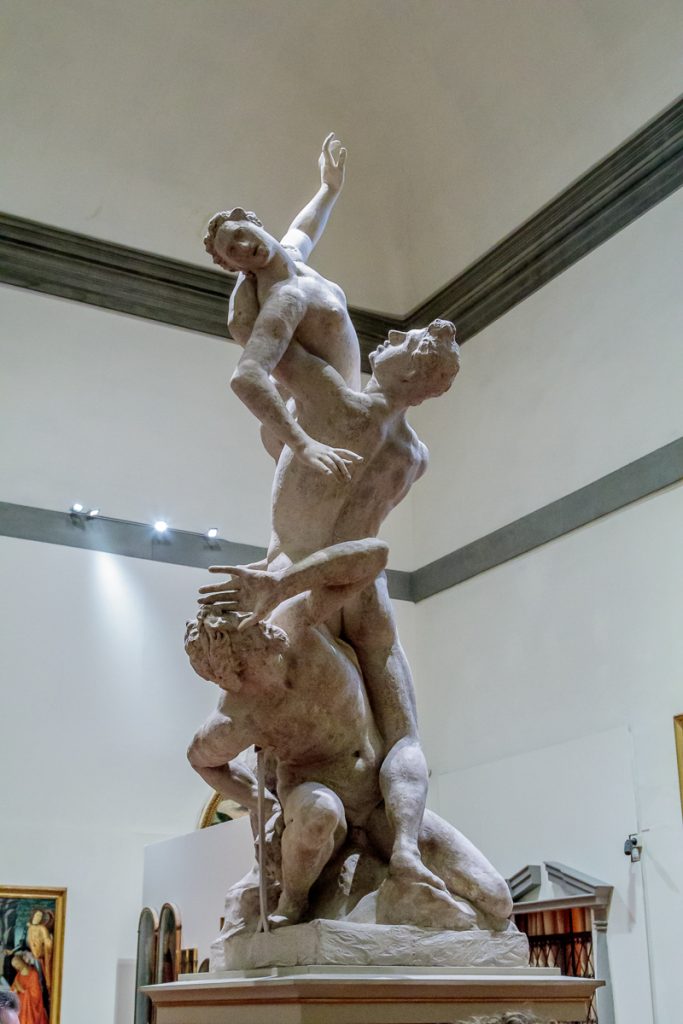 Rape of the Sabine Women -1

The Rape of the Sabines by Giambologna (Jean de Boulogne) , 1579-1583, depicts three figures with one man (a Roman) lifting a woman (a Sabine) into the air while a second man (the woman’s father) crouches below.  The three figures are constructed in such a way as to invite the observer to move around the statue and view from man angles.  (http://www.accademia.org/explore-museum/artworks/rape-sabines/)

This sculpture represents an episode in the history of Rome in which the first generation of Roman men acquired wives for themselves from the neighboring Sabine families.  The word “rape” in the English title is the conventional translation for the Latin “raptio” which, in this context, means “abduction” rather than a sexual violation.  You can read a more thorough history at https://en.wikipedia.org/wiki/The_Rape_of_the_Sabine_Women. 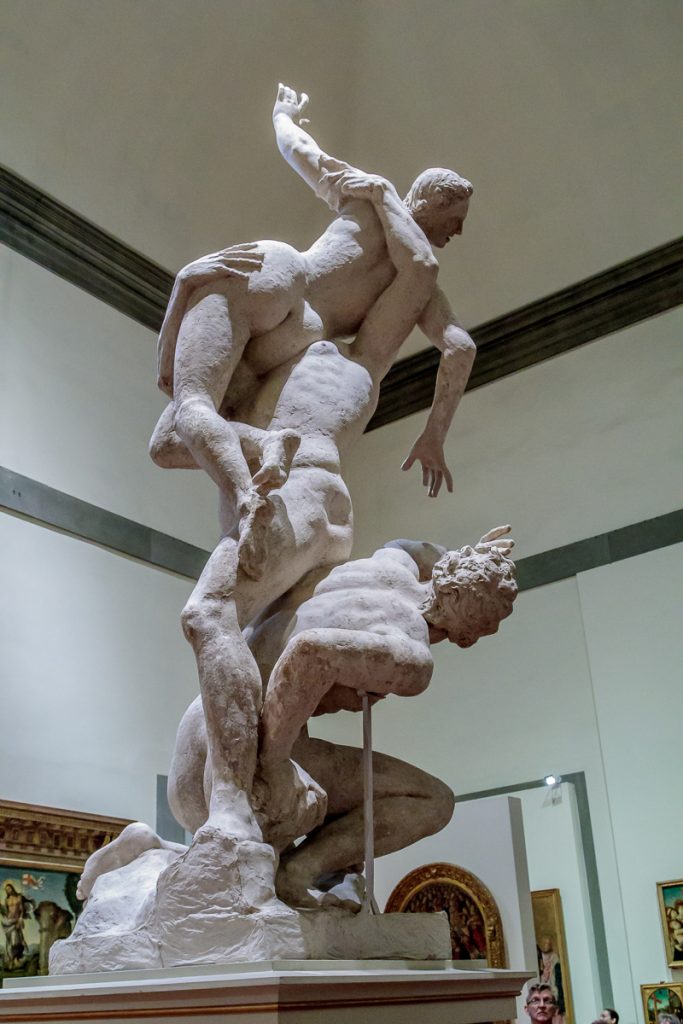 Rape of the Sabine Women -3

Although the sculpture in the Accademia Gallery is beautiful, it is only the plaster cast of the final sculpture.  Many artists would carve their intended sculpture from a block of plaster to produce a life-size mock-up or first draft.  Careful measurements would be transferred to the block of marble to produce the final sculpture.  The Accademia Gallery has many plaster casts that I will share in a later post.

The next gallery contains 4 Michelangelo sculptures know as The Slaves or The Prisoners.  A series of sculptures was commissioned for the tomb of Pope Julius II della Rovere in 1505.  There were to be more than 40 figures on this tomb.  The four figures shown here are in an incomplete state.  “They are some of the finest examples of Michelangelo’s habitual working practice, referred to as “non-finito” (or incomplete), magnificent illustrations of the difficulty of the artist in carving out the figure from the block of marble and emblematic of the struggle of man to free the spirit from matter. These sculptures have been interpreted in many ways. As we see them, in various stages of completion, they evoke the enormous strength of the creative concept as they try to free themselves from the bonds and physical weight of the marble. It is now claimed that the artist deliberately left them incomplete to represent this eternal struggle of human beings to free themselves from their material trappings.”  http://www.accademia.org/explore-museum/artworks/michelangelos-prisoners-slaves/  All of the Slave figures range from 8’ 4” to over 9 feet tall.

The Awakening Slave – “This figure feels like it is writhing and straining, trying to work its way out of the marble.” 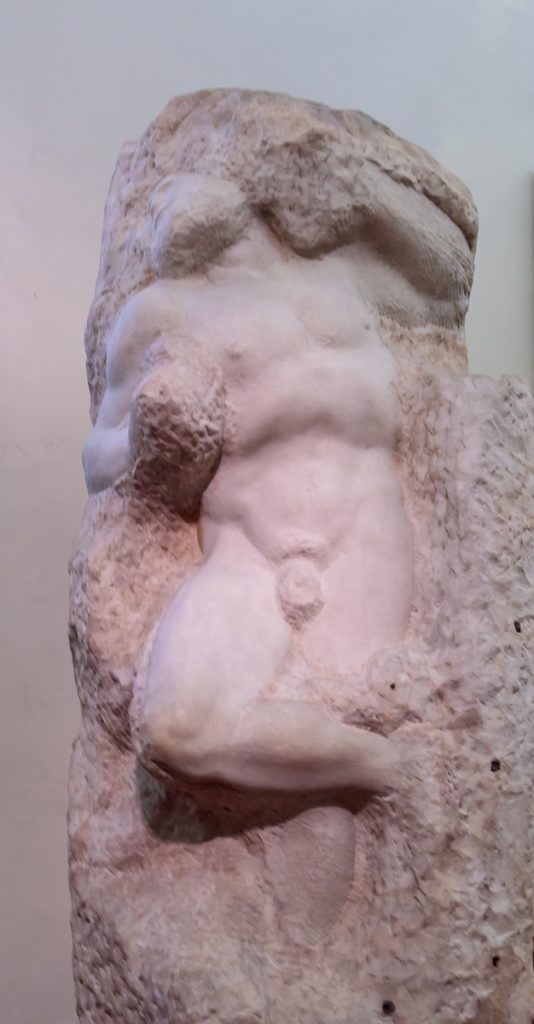 The Young Slave – “This figure is the most clearly defined, but seems bound within itself, burying its face in his left arm and hiding the right one around his hips.” 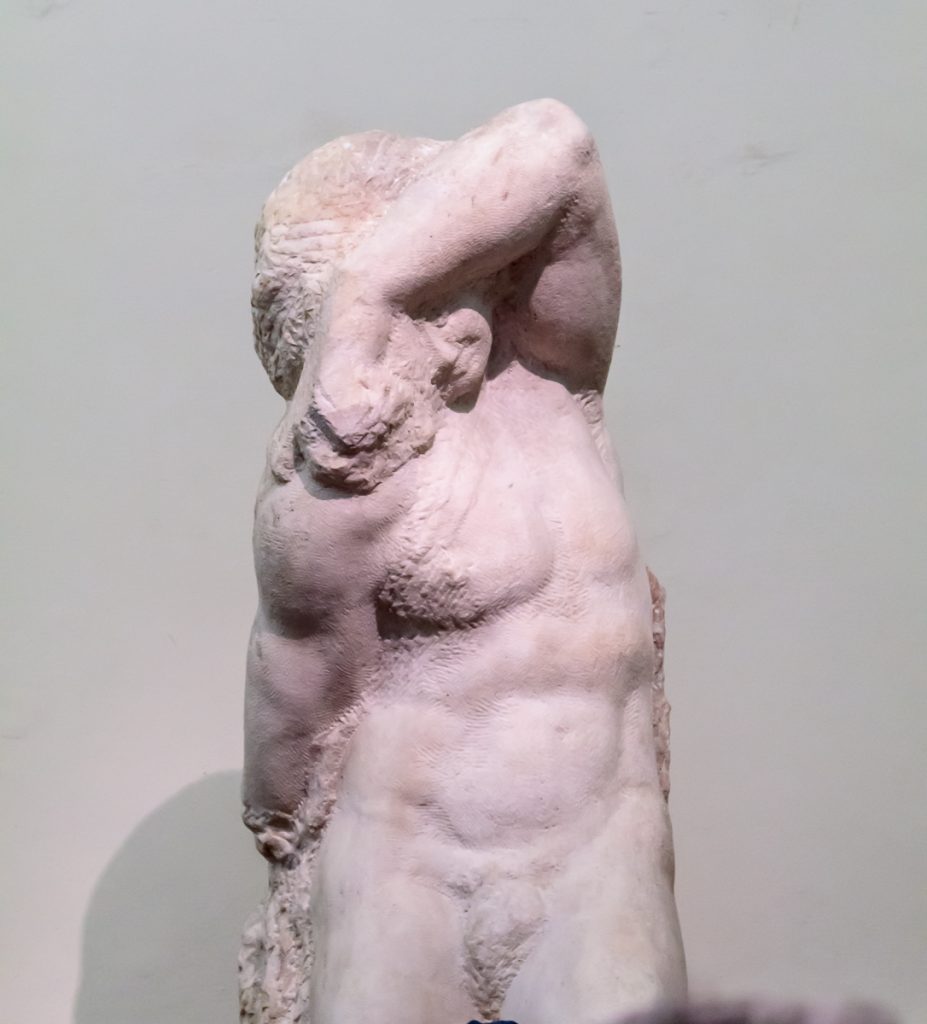 The Bearded Slave – This figure is the most finished of the four slaves. 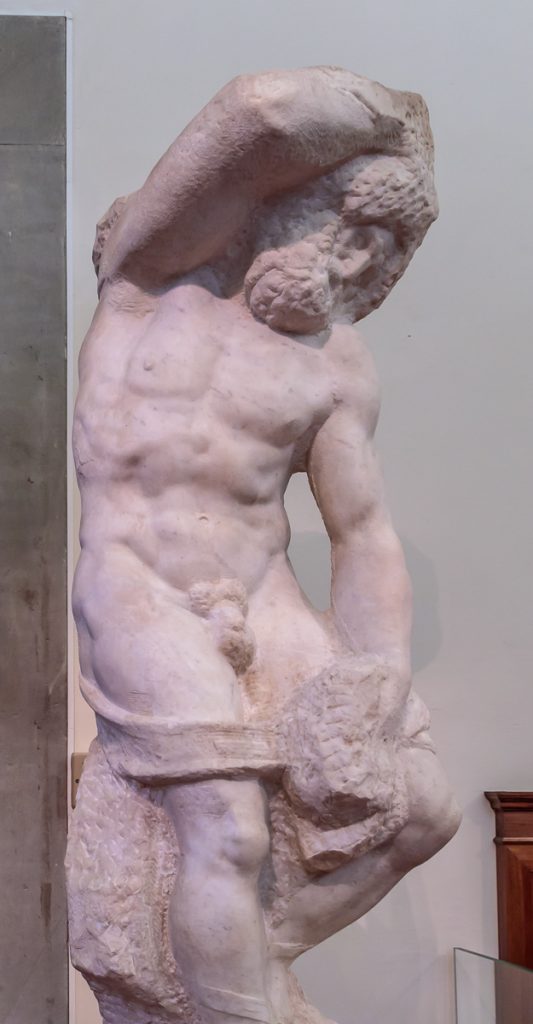 The Atlas – This figure seems to be carrying a huge weight on his head, hence the title Atlas. 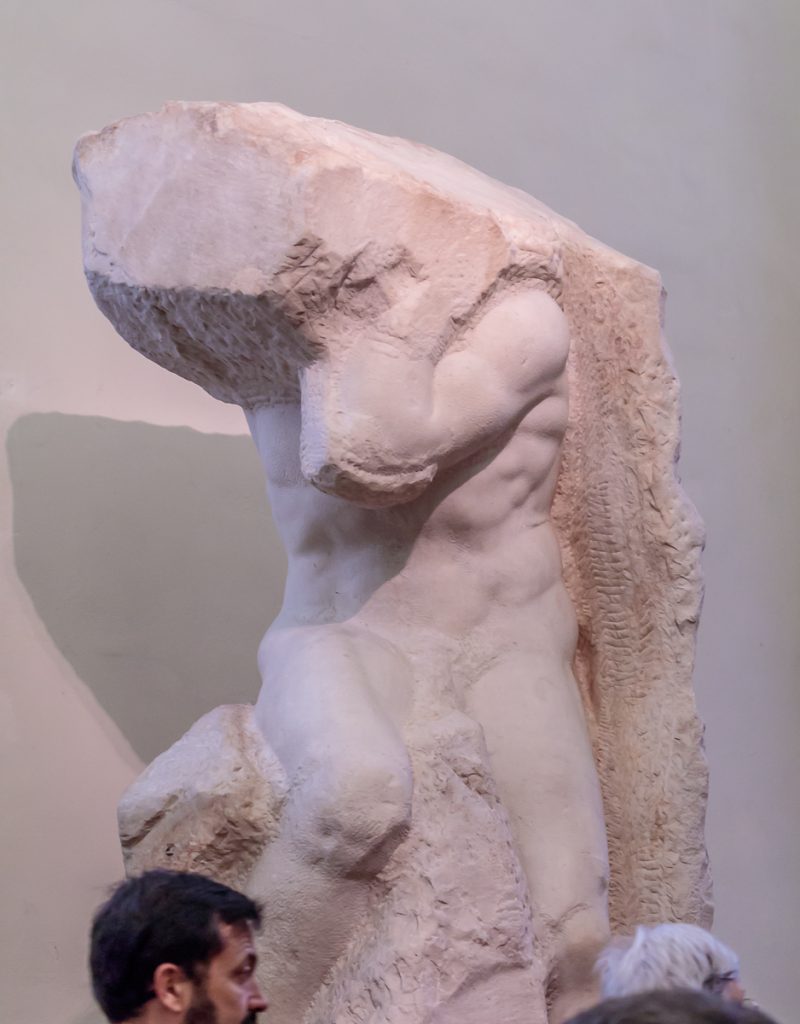