During Nero’s great Christian persecution in 64 A.D., Saint Peter was martyred, crucified, and buried in Caligula’s Circus.  After Constantine’s Edict of Milan (313 A.D.) Christians were allowed to construct places of worship. Constantine himself authorized the building of the Basilica of Saint Peter in 324. It was intended to enclose Peter’s tomb, the center of the structure.

When the Popes abandoned Rome during the Avignon schism (1309-1377), the basilica, which was one thousand years old by then, was showing signs of wear and deterioration.  By the early 16th century, the need to choose between restoring St. Peter’s or rebuilding it completely was unavoidable, so much so that the new Pope Julius II, elected in October 1503, decided to entrust this task to Donato Bramante in 1505, one of the greatest architects of his time. Construction was begun by Pope Julius II in 1506 and completed in 1615 under Paul V. (vaticanstate.va/content/vaticanstate/en/monumenti/basilica-di-s-pietro/storia.paginate.1.html) 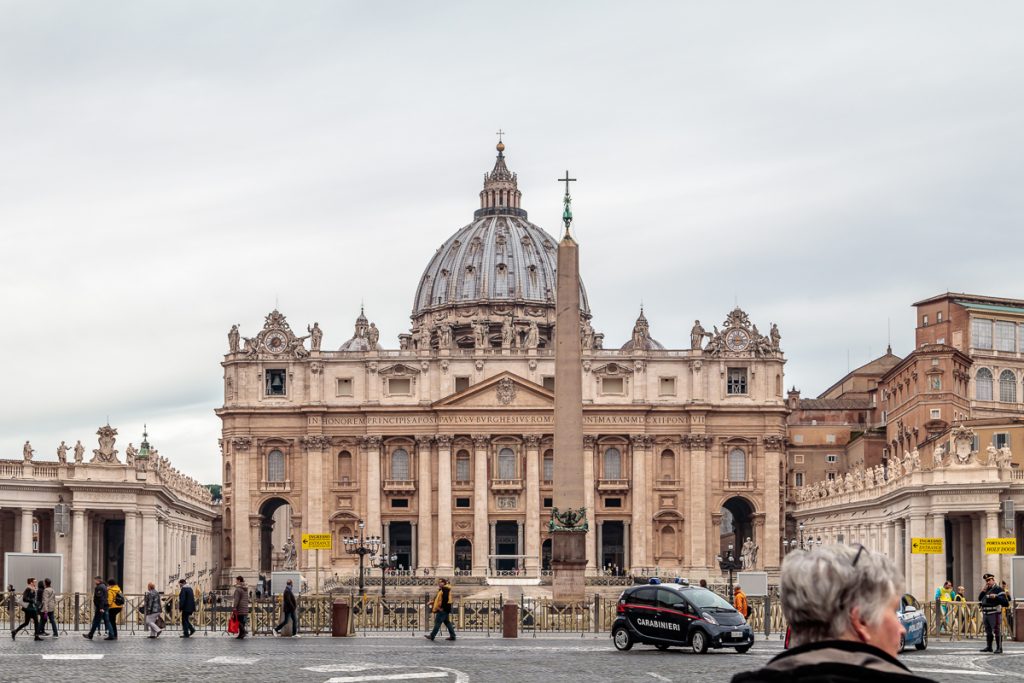 The basilica contains many works of art.  One of the best known is the Pieta.  This Pieta (one of 4 or 5 that Michelangelo produced) is the most famous in the world. Pieta means pity or sorrow. Michelangelo was only 23 years old and it took him one year to sculpt it. It is the only artwork by Michelangelo that is signed. If you look at the ribbon across Mary’s chest you can see his name. It says Michelangelo Buanorotte Florentino ha fatto questo, Michelangelo Buonarotti from Florence has made this. He signed this work, because one day he was looking at his statue and some people came in and said the statue was made by a different sculptor. Michelangelo got angry and chiseled his name in that night. Michelangelo has been criticized for this work as well. Critics say that if Mary would stand up, she would be twice as big as Christ. Also, some considered Mary to be way too youthful. She looks younger than her son. The reason Mary looks big is because nowadays the statue stands in the wrong position. Michelangelo created it thinking it would stand on ground level, so you would look at the statue from above. If you look at the statue like that, suddenly the perspective works.  (Arend, Paul den. Complete Guide to the Vatican – Extended Edition: Including Saint Peter’s Basilica, the Vatican Museums, Sistine Chapel, Santa Maria Maggiore, St. Paul and St. John. Kindle Edition) 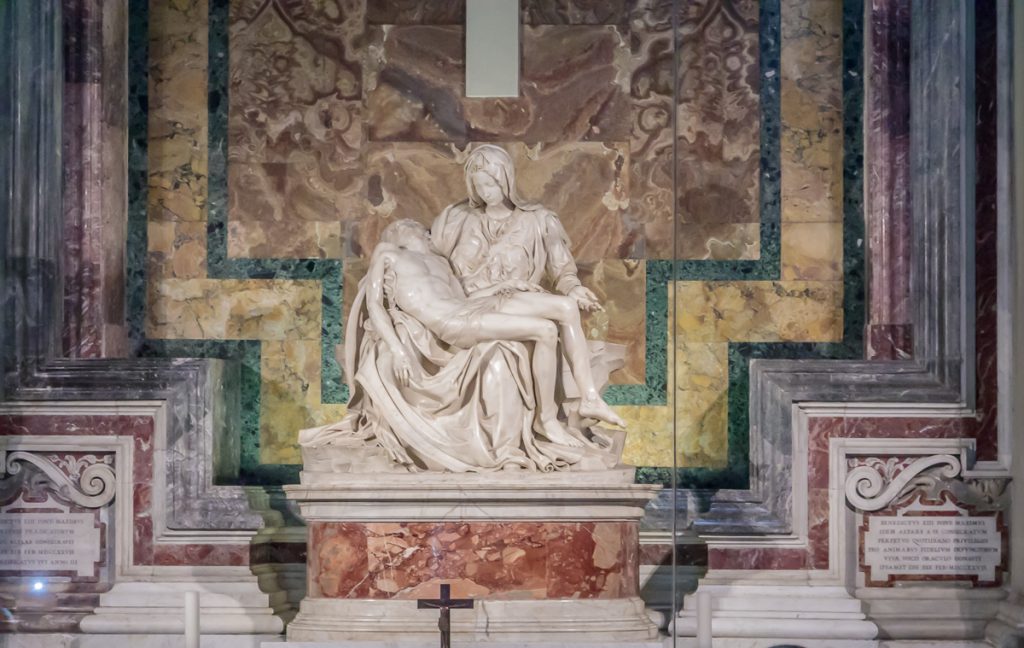 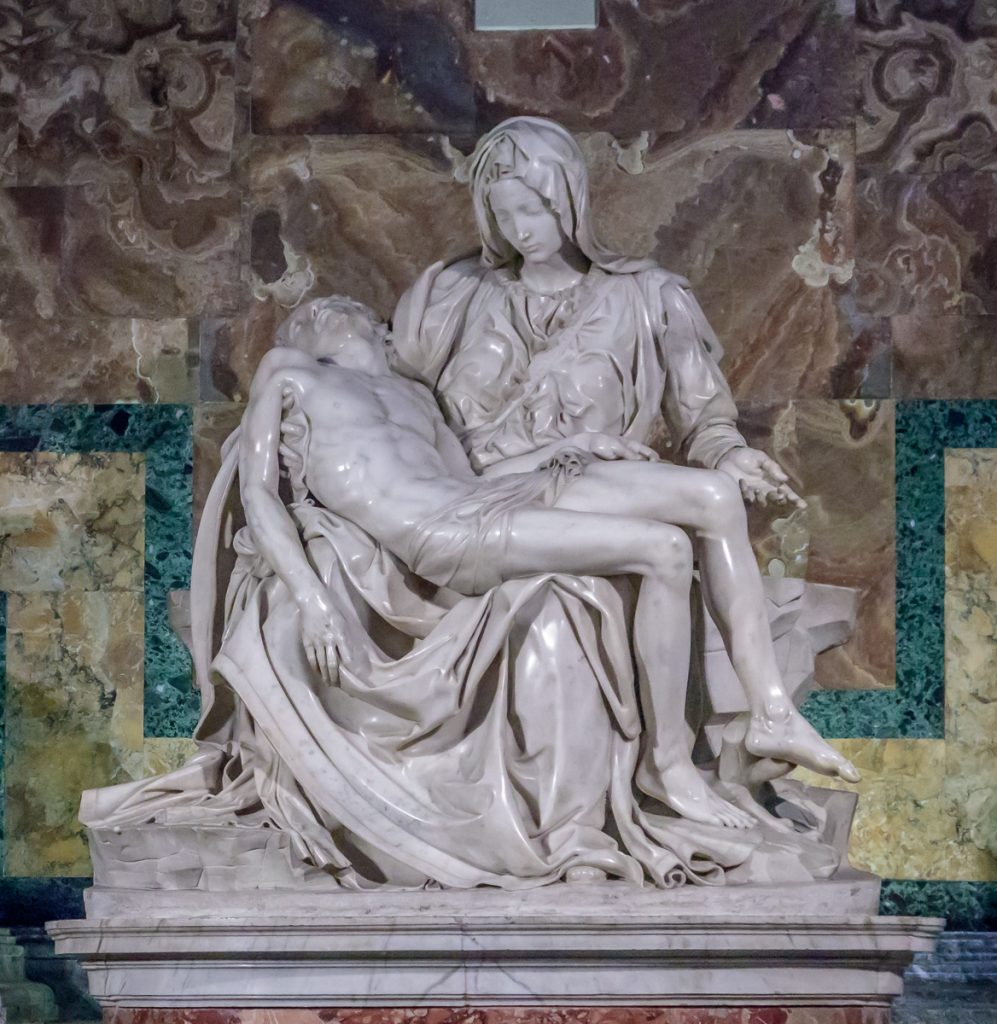 Moving deeper into the church, one chapel contains the altar of St. Sebastian, an early Christian martyr from the late Roman empire. Under the altar are the remains of Pope St. John Paul II, which were moved to this chapel in 2011.  The mosiac above the altar was made by Pietro Paolo Christofari, a Baroque artist who was Director of the Vatican Mosaic Studio from 1743-1755. This is a copy of Domenichino’s original work, which was painted between 1625 and 1631. (stpetersbasilica.info/Altars/StSebastian/StSebastian.htm) 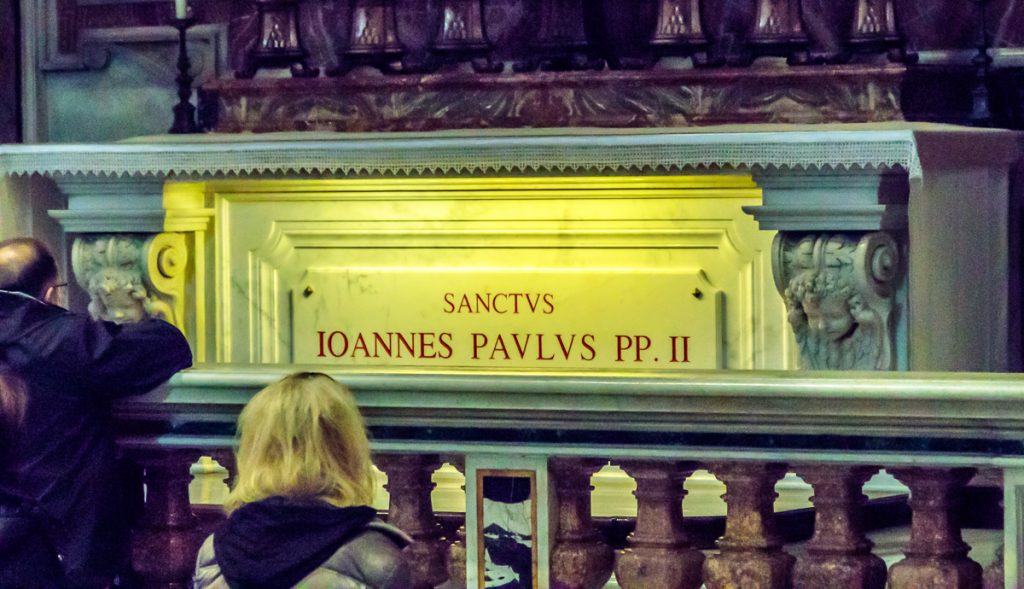 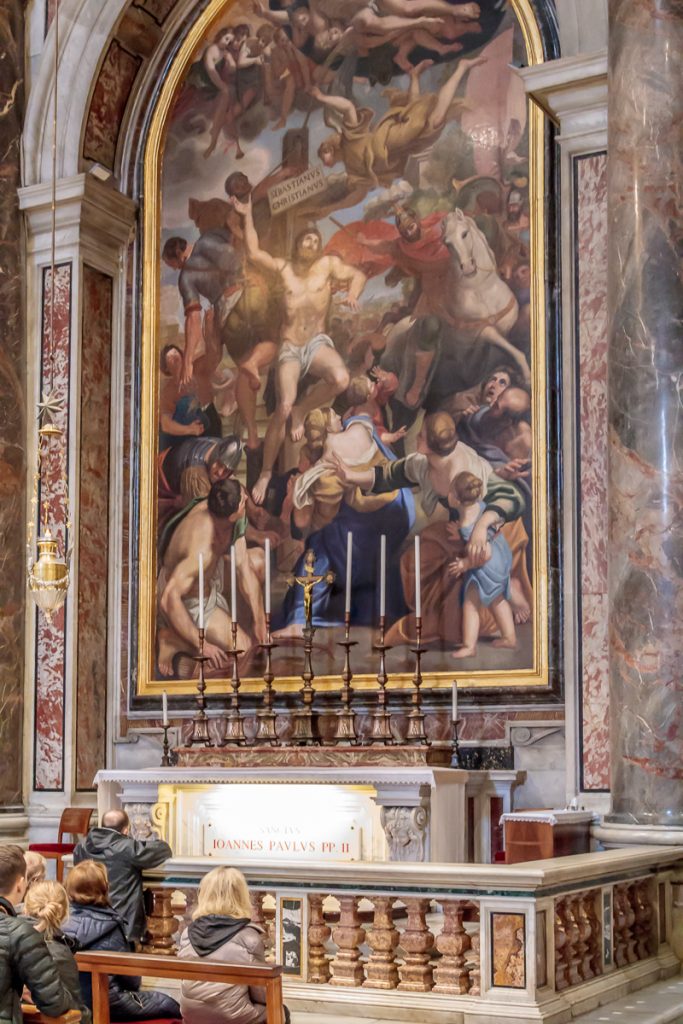 The Altar of St. Jerome is near the crossing of St. Peter’s Basilica in the right transept. The altarpiece is a mosaic of the Last Communion of St. Jerome executed in 1744 based on a painting by Domenichino (1614)  (www.sacred-destinations.com/italy/rome-st-peters-basilica/photos) 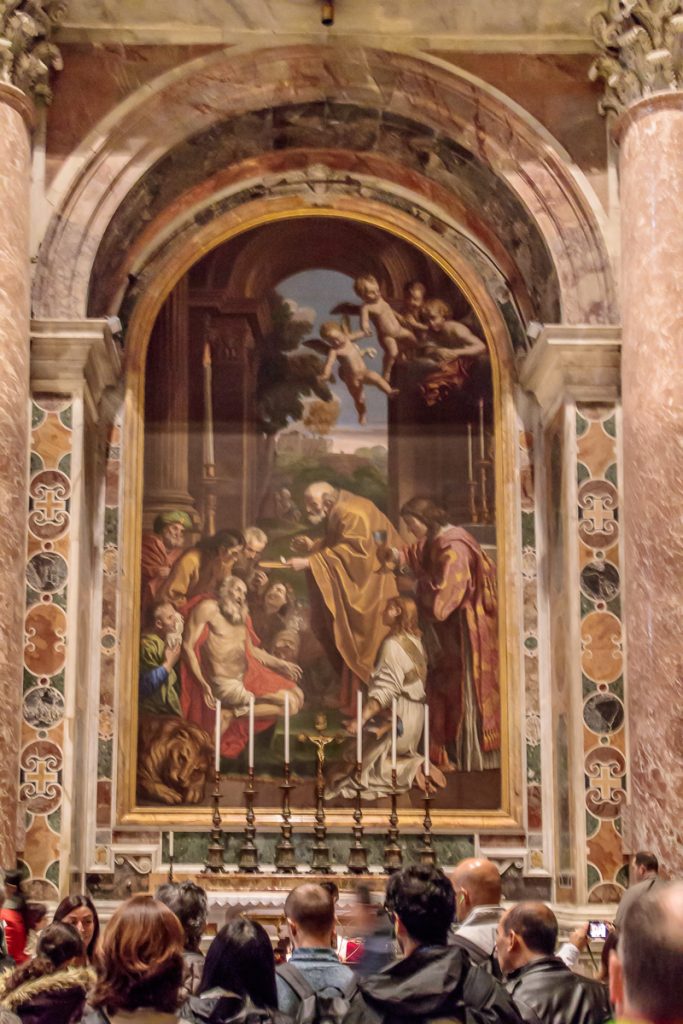 The body of Pope St. John XXIII (d. 1963) is displayed in a glass case beneath the Altar of St. Jerome. When the tomb was opened in order to move his body to the basilica in 2001, it was found to be incorrupt and was therefore placed in a glass case. This location was chosen because the pope was a specialist in the church fathers and a devotee of St. Jerome in particular.  (sacred-destinations.com/italy/rome-st-peters-basilica/photos) 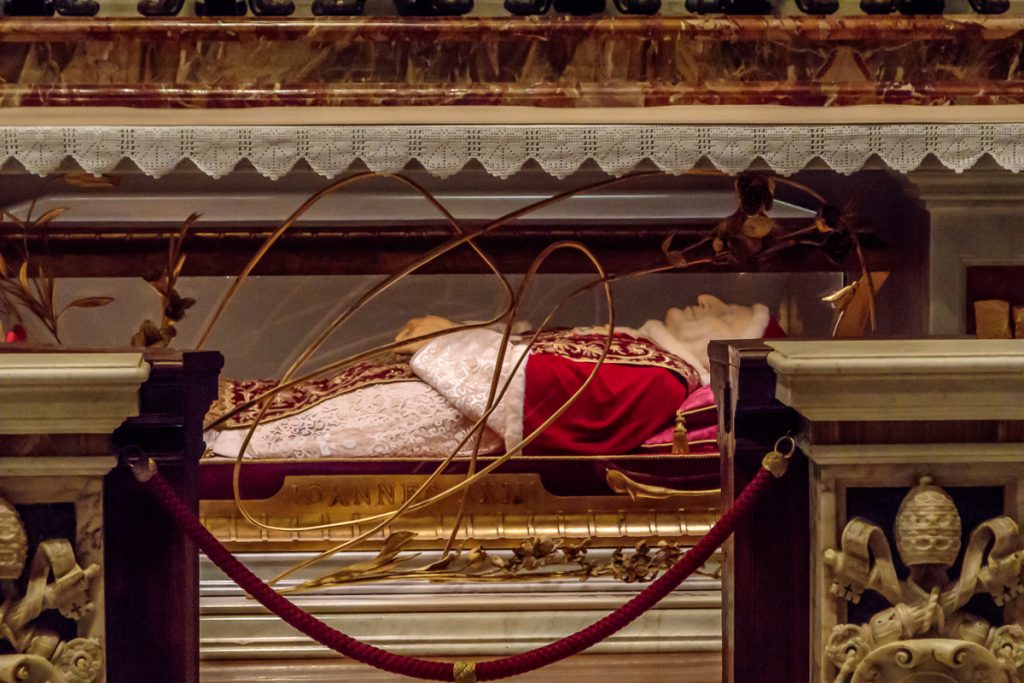 The Basilica centers around the Papal Altar where only the Pope celebrates Mass. It was consecrated by Clement VIII, June 5, 1594, on top of several other older altars.  Rising above the altar is the baldacchino (95 ft. tall canopy), Bernini’s masterpiece. The ancient tomb of St. Peter lies directly below the altar. (stpetersbasilica.info/Altars/PapalAltar/PapalAltar.htm) 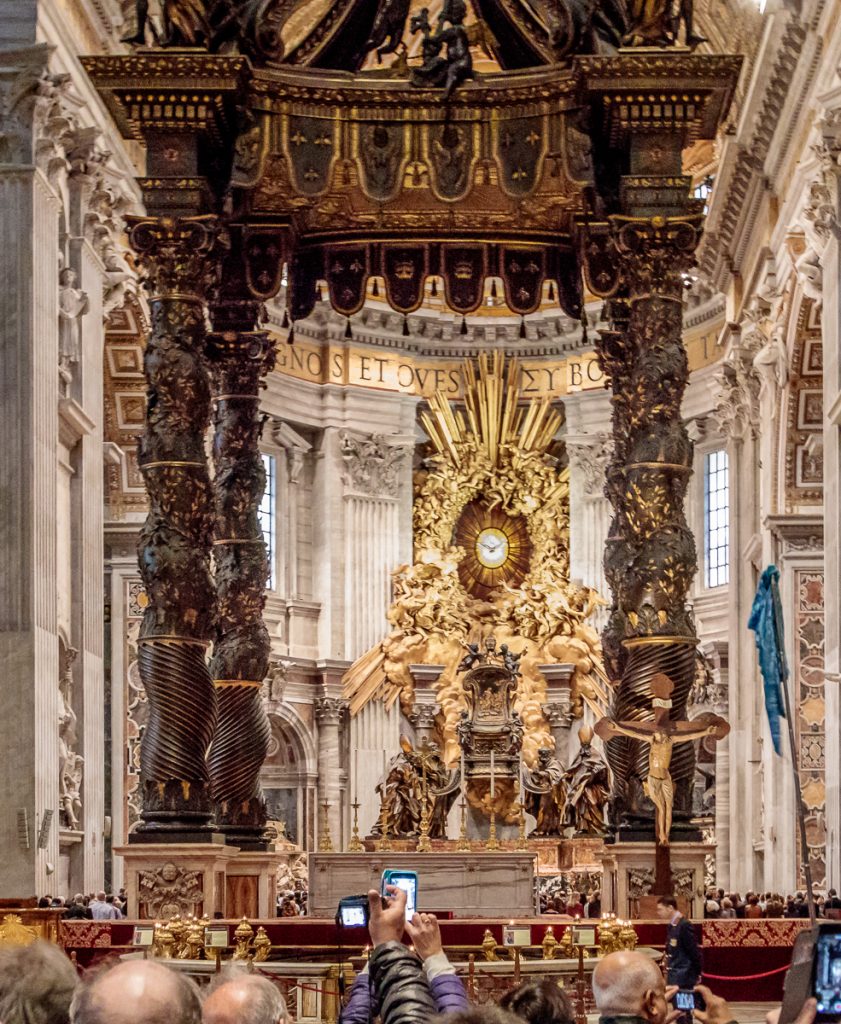 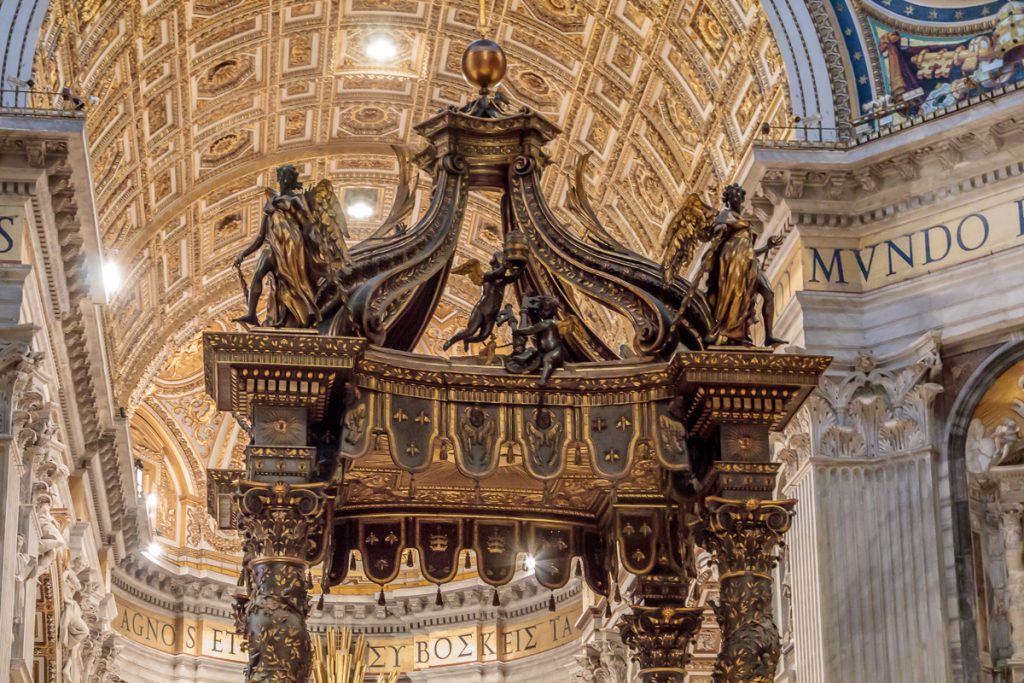 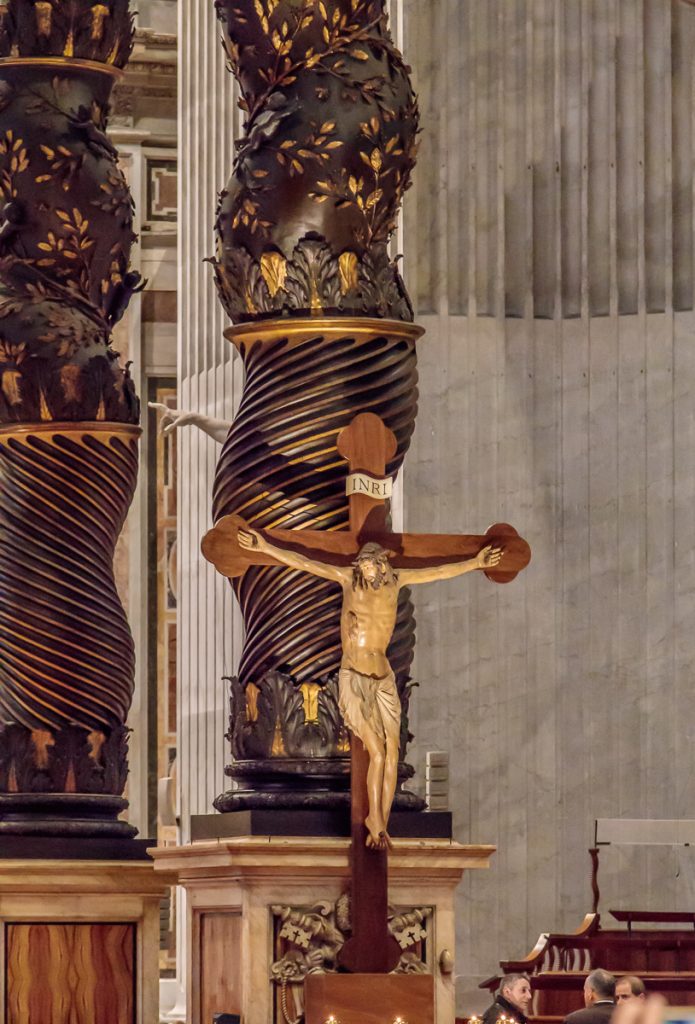 Crucifix in front of Baldacchino

At the center of the apse, above the Chair of St. Peter, is an alabaster window of a white dove which symbolizes the Holy Spirit, hence the title “Dove of the Holy Spirit”.  The dove, from wing tip to wing tip, is six feet wide, which puts into perspective the size of the whole sculpture.  The light rays through the window are further accentuated by their continuation within the bronze sculpture; around the window is a plethora of angels on clouds, but beyond the angels, the light rays of the window continue in bronze form. From this we can tell that Bernini designed the sculpture and the window as a single, unified work. Interestingly, this window is not actually made of glass, but rather alabaster, a naturally translucent stone. The exact time the window was completed is uncertain, though most sources place it around 1660.  (stainedglasswindowsblog.wordpress.com/2014/04/08/dove-of-the-holy-spirit) 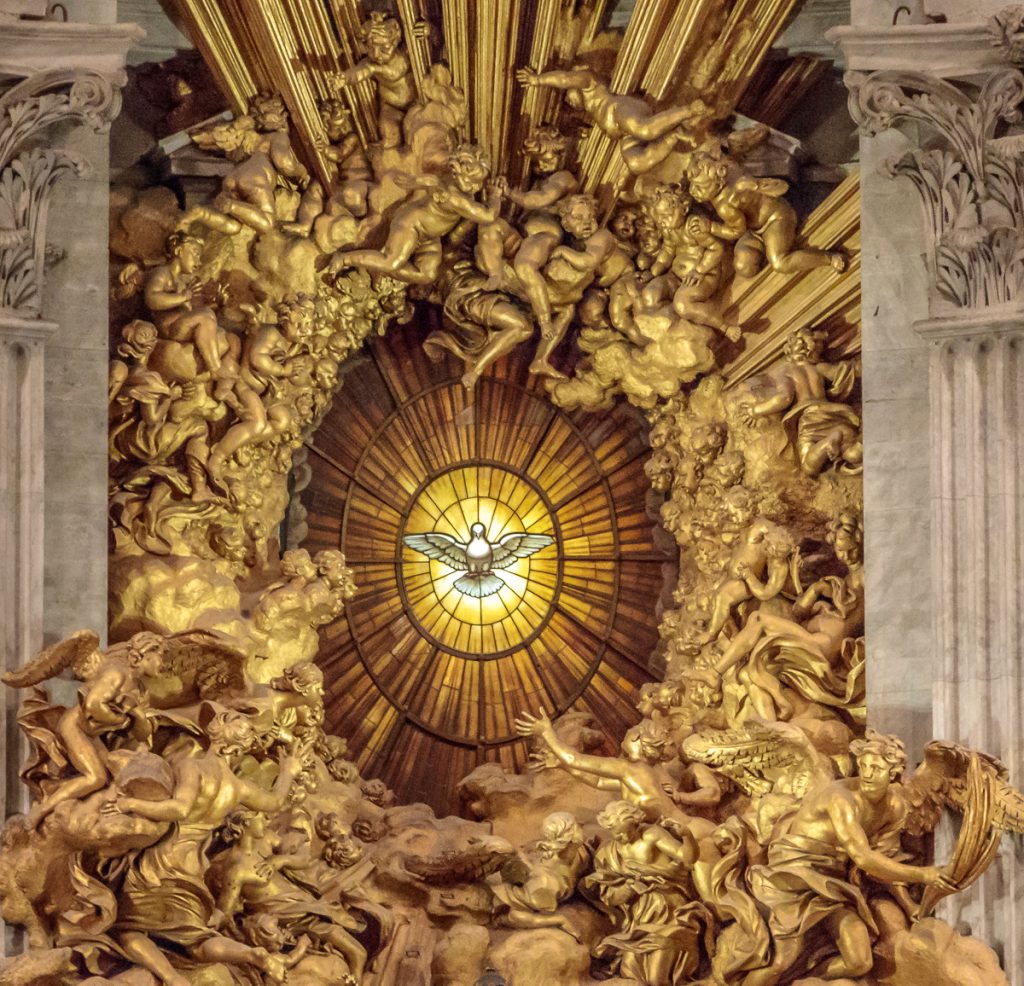 The great dome soars above the altar and the baldacchino, embellished with mosaic and stucco ornaments. It is supported by four structural piers with a perimeter of 233 feet and a height of 394 feet from the ground to the roof of the lantern.

Around the base of the drum we can read the solemn words from Matthew’s Gospel with which Jesus invests Peter with supreme authority. The text reads: “Tu es Petrus et super hanc petram aedificabo ecclesiam mean et tibi dabo claves regni caelorum” (“You are ‘Rock’ and on this rock I will build my Church, to you I will give the keys of the kingdom of heaven.” Mt 16:18).

The gigantic black letters (6.5 ft. high) of this text on a gold background are lit by the light from 16 large windows, typical of Michelangelo’s style, which punctuate the drum.

Above the windows, the dome is divided into sixteen ribs and as many segments, decorated by majestic figures on six ascending concentric levels. 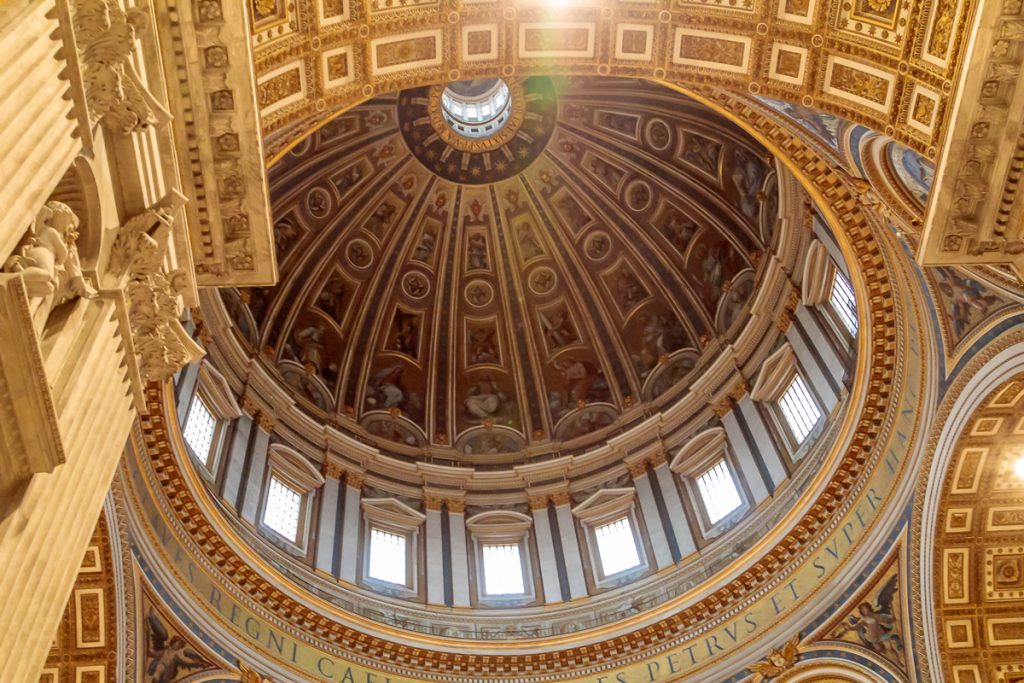 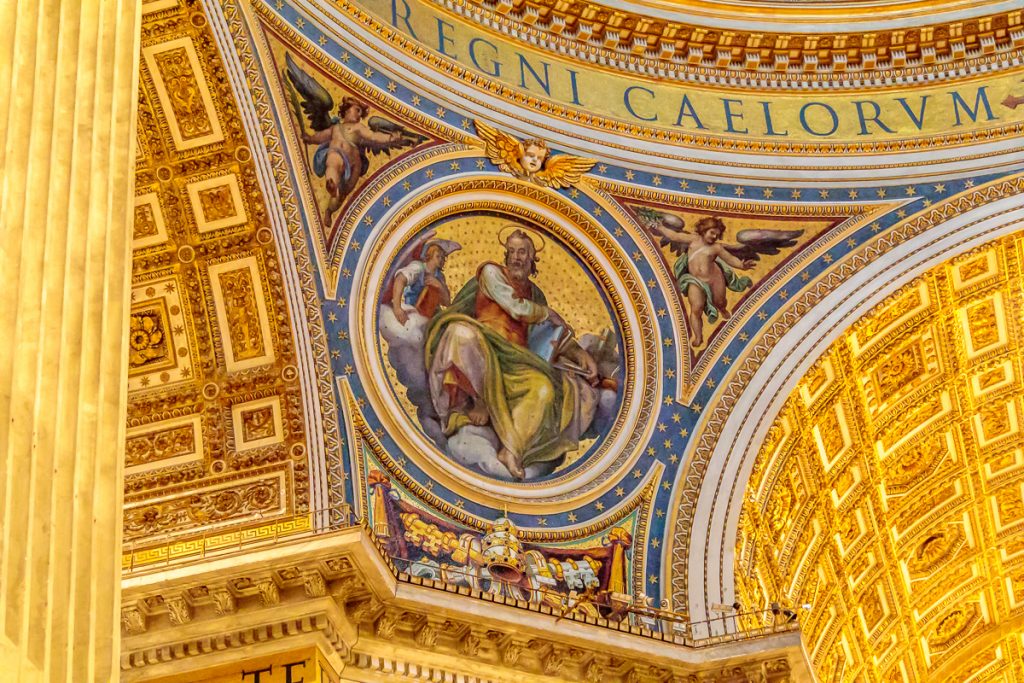 The Altar of the Transfiguration on the east side of the southeast pier in the left aisle is a mosaic reproduction of Raphael’s famous painting of 1520. A team of six artists took nine years to execute the mosaic, finishing in 1767.  (sacred-destinations.com/italy/rome-st-peters-basilica/photos) 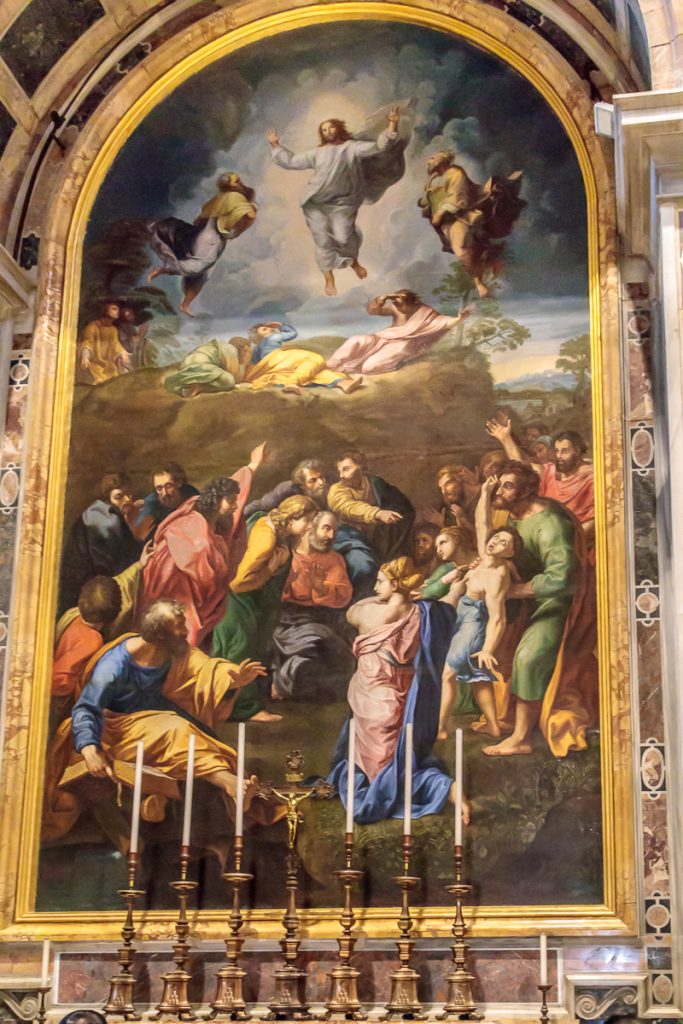 Altar of the Transfiguration

Yes, these are mosaics, not paintings.  There is such a great level of detail in these that at a distance they look like paintings.  This close-up is intended to show the tiles of the mosaic, but may not be clear on-line. 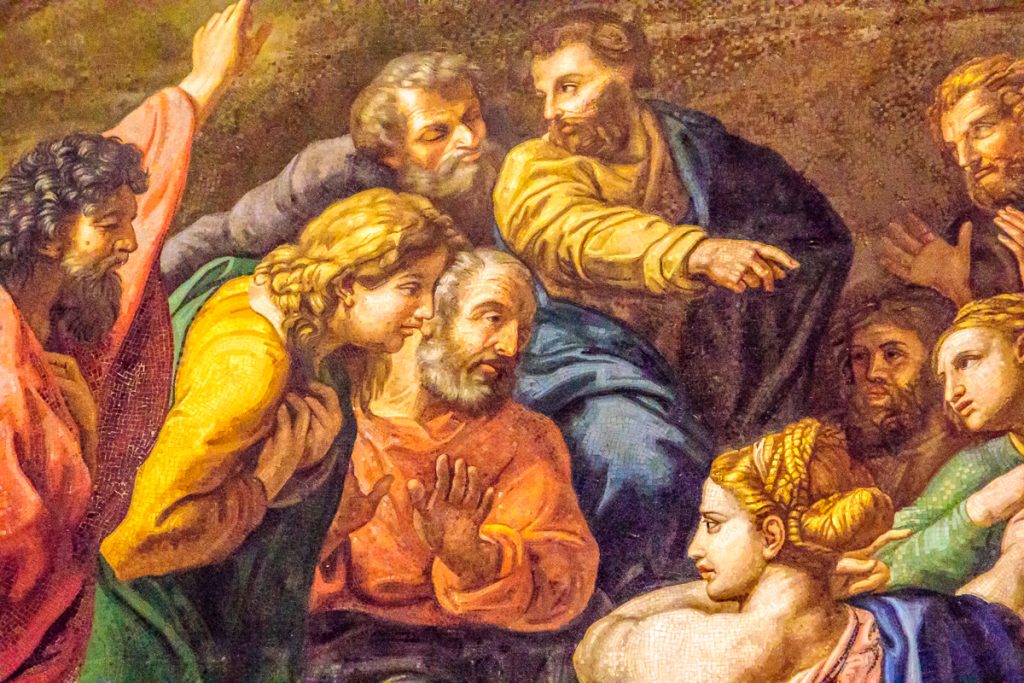 Mosaic Detail in Altar of the Transfiguration

Another mosaic depicting baptism of Christ in the Baptistery Chapel, 17th century 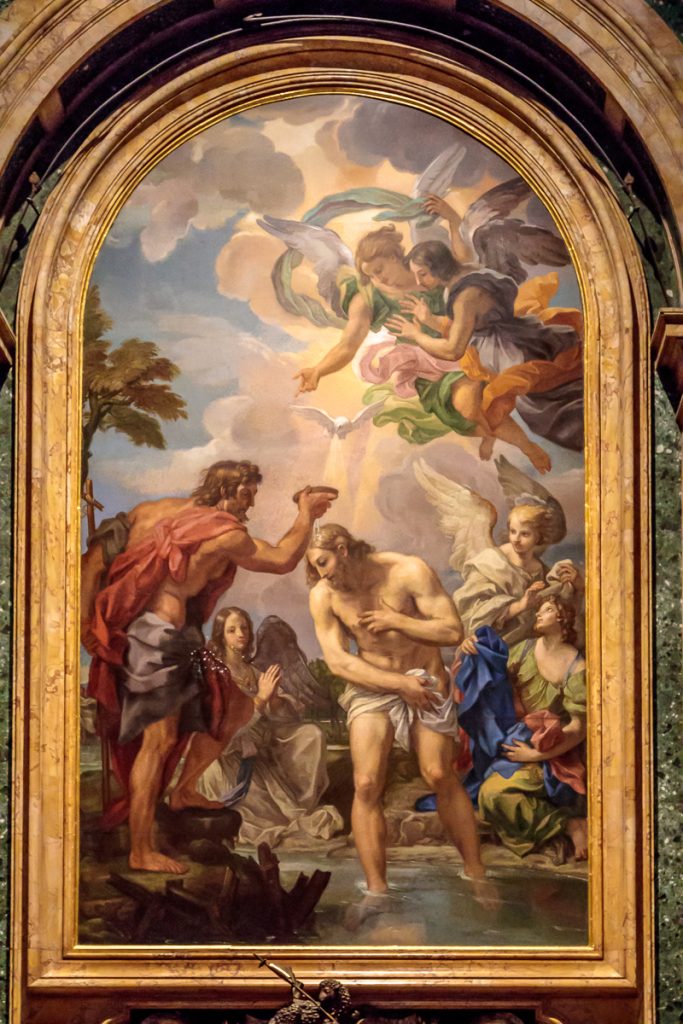 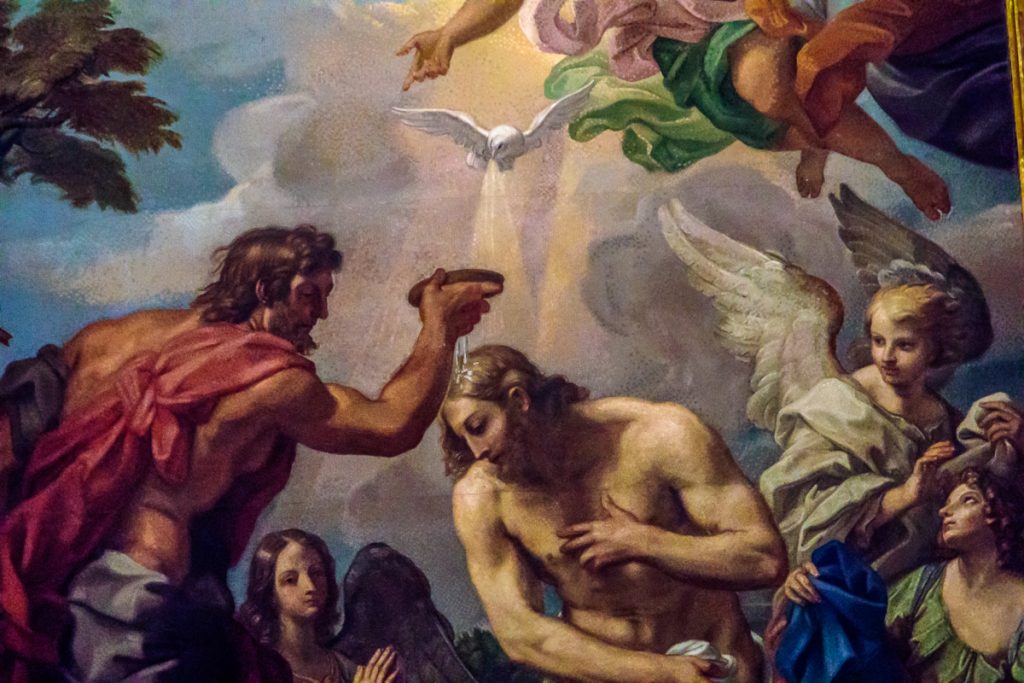 There is so much to see in Saint Peter’s Basicila.  This is just a quick look at what we saw.