We were able to celebrate mass at Santa Maria in Traspontina, just a block away from our hotel, and only about 4 blocks from Vatican City.  I was certainly not expecting a local parish church to be as beautiful at this. 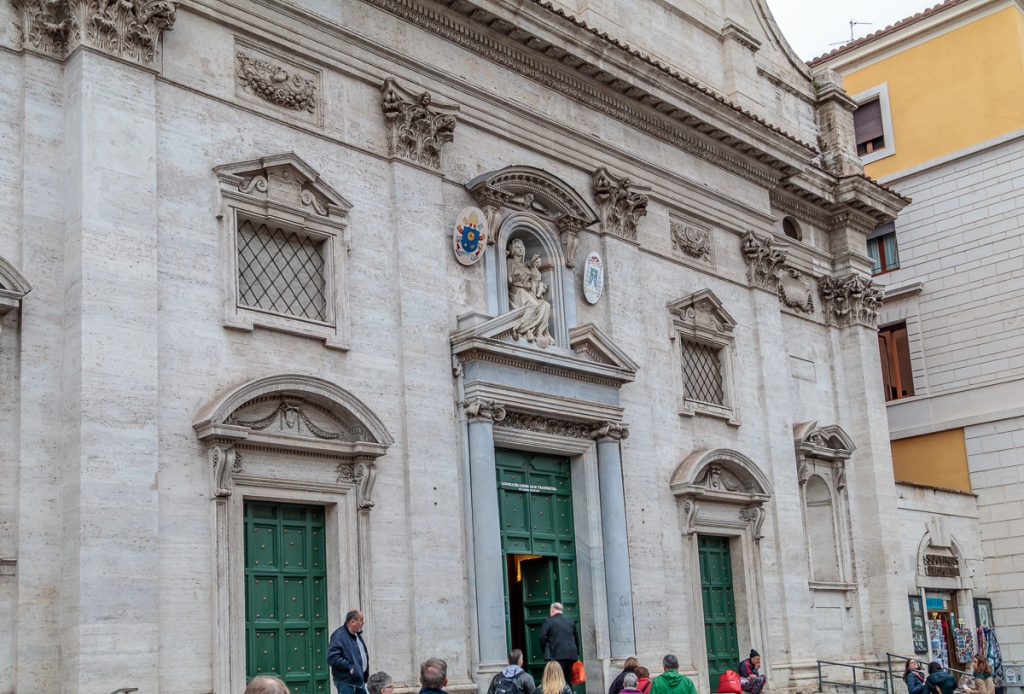 There is an interesting history of this site.  Pope Alexander VI (1492-1503) demolished an ancient Roman pyramid on this same site (the Meta Romuli, that was believed to be Romulus’s tomb, Romulus being one of the founders of Rome) for the construction of the first church. This church was then demolished during the pontificate of Pius IV (1559–1565) to clear the line of fire for the cannons of the Castel Sant’ Angelo. The soldiers at Castel Sant’Angelo wished to practice shooting at the Gianicolo Hill, which otherwise would have been hidden behind the church.  Designs for a replacement church were in place by 1566, though the papal artillery officers insisted that its dome be as low as possible to avoid a recurrence of the previous problem — for this reason this is the only church in Rome whose dome does not lie on a drum. The new church was erected along the North side of Borgo Nuovo. 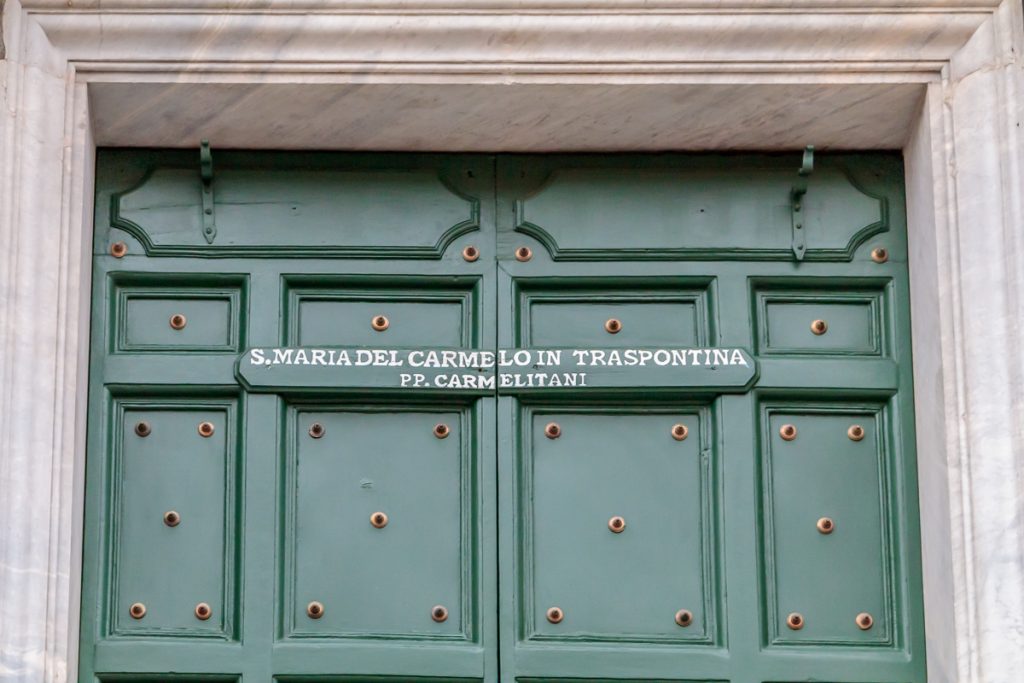 Door to Santa Maria in Traspontina 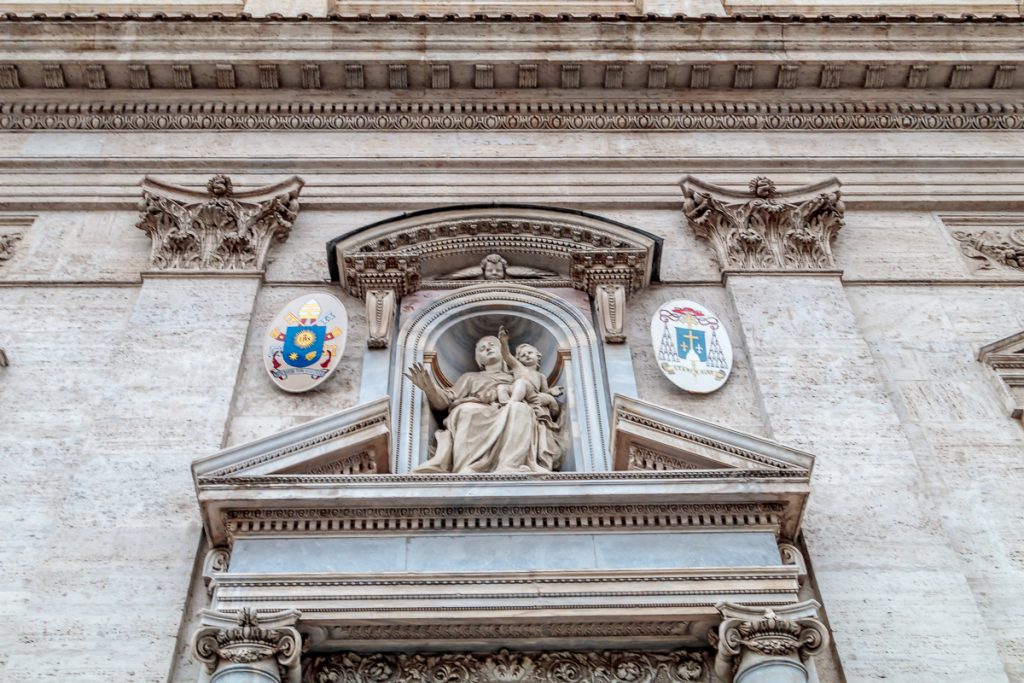 Entrance to Santa Maria in Traspontina 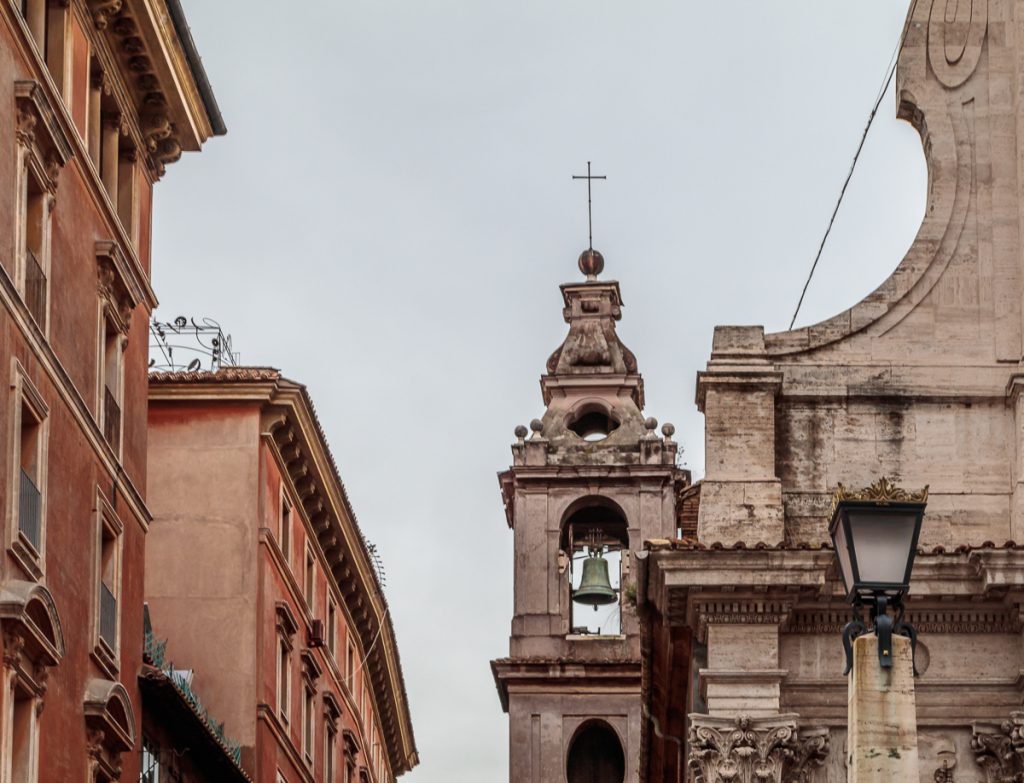 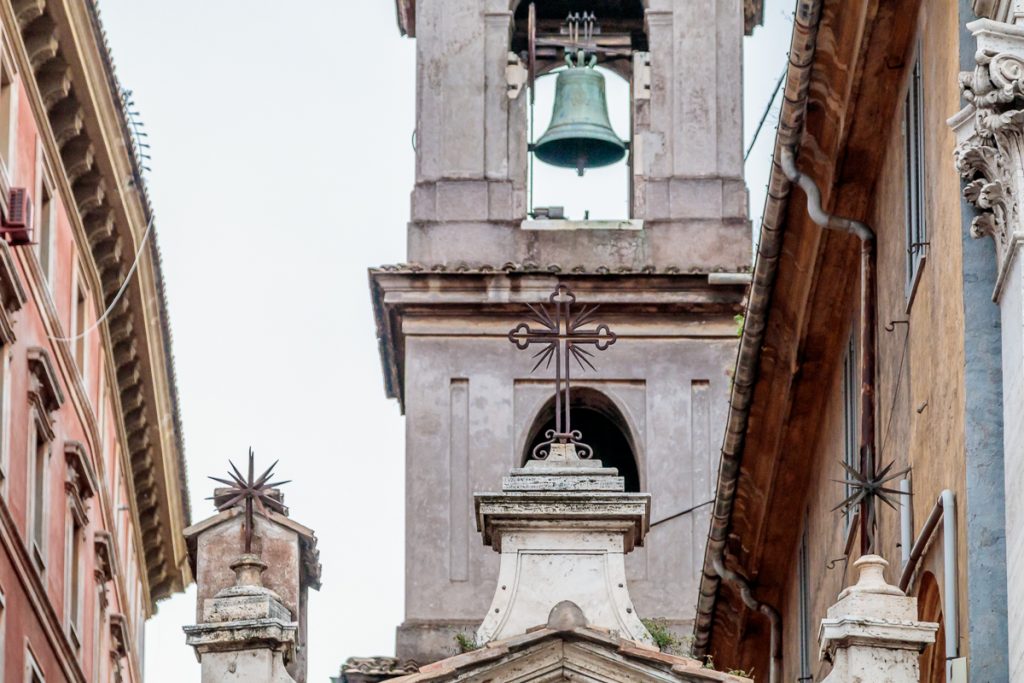 The chapel of Our Lady of Mount Carmel within the church was built in 1581 by the Marquise of the Guard Victory Tolfa Orsini. The statue was placed in the last century in veneration of the Madonna del Carmine, the object of special devotion not only by the faithful of the neighborhoods of Borgo and Prati, but the whole Rome, and of those, passing in the Via della Conciliazione, the “Via Sacra” leading to the tomb of the Prince of the Apostles,  Passersby could linger in the church to admire the statue of the Madonna del Carmine, who as Queen sits on a golden throne. The throne was executed in 1922 and the statue was blessed by Pope Pius XI in a private audience, and was solemnly crowned by Bishop Luigi Pellizzi the eve of the Feast of Mount Caramel (July 16) in 1928.  (parrocchiatraspontina.altervista.org/blog/la-chiesa/cappella-madonna-del-carmine/) 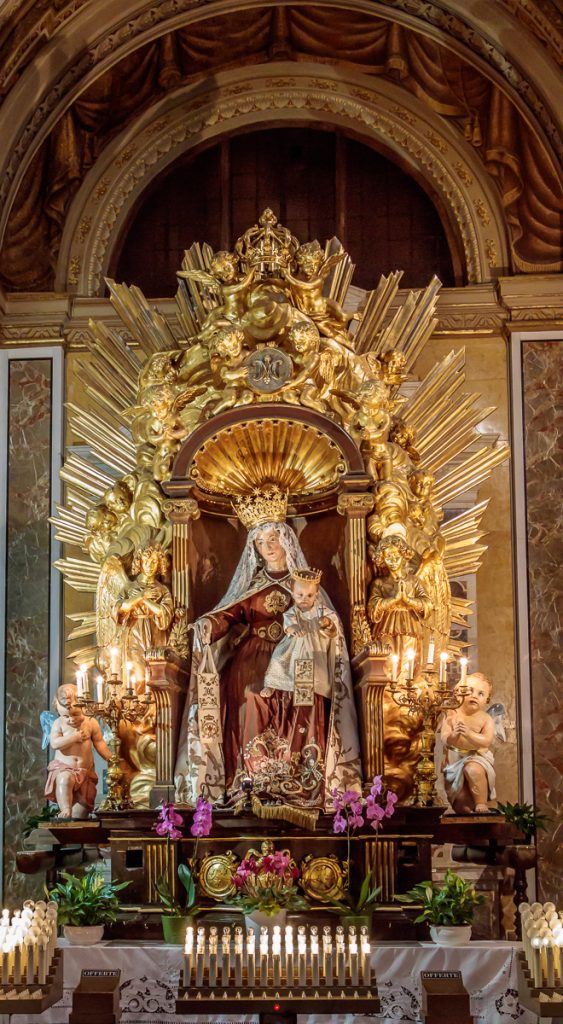 Our Lady of Mount Carmel

The beautiful high altar was erected as a monument to the beautiful image of the Italian-Byzantine Madonna. The current image that is under the rich canopy is a late copy (perhaps the 19th century) of the original (13th century).  The altar, made in a temporary workshop located next to the church, is the work of modest craftsmen and was consecrated in 1674. The altarpiece depicts a cloth inlaid with agate and precious marbles. The large wooden crown is covered with gilded copper while the stucco angels are holding the crown. There are two marble angels in the middle of the ciborium.    (parrocchiatraspontina.altervista.org/blog/la-chiesa/laltare-maggiore/) 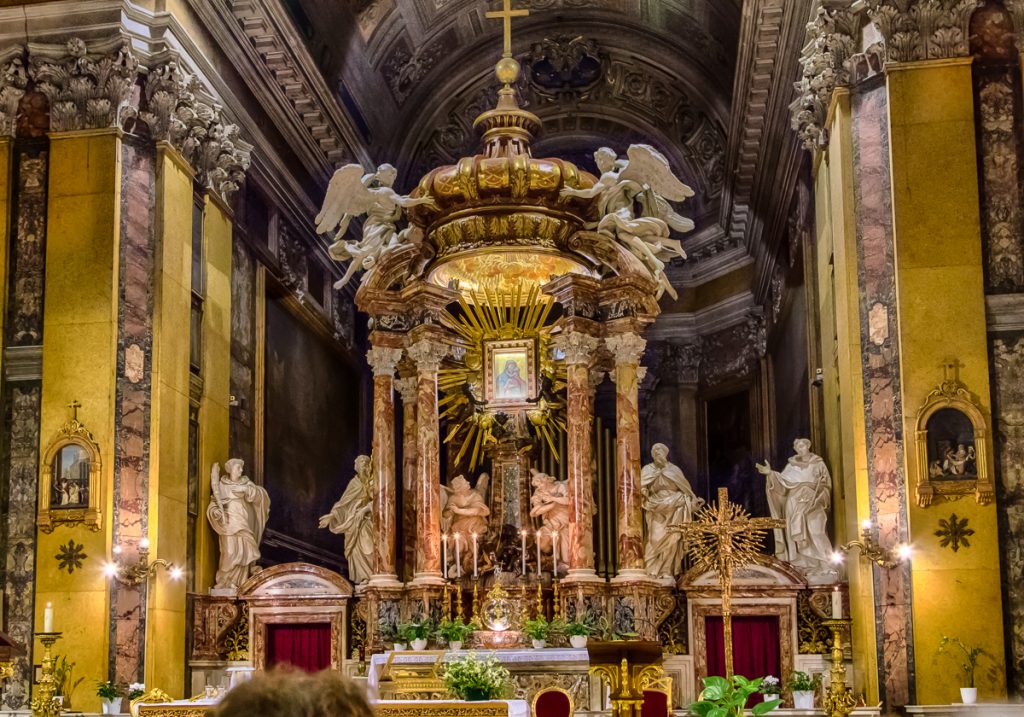 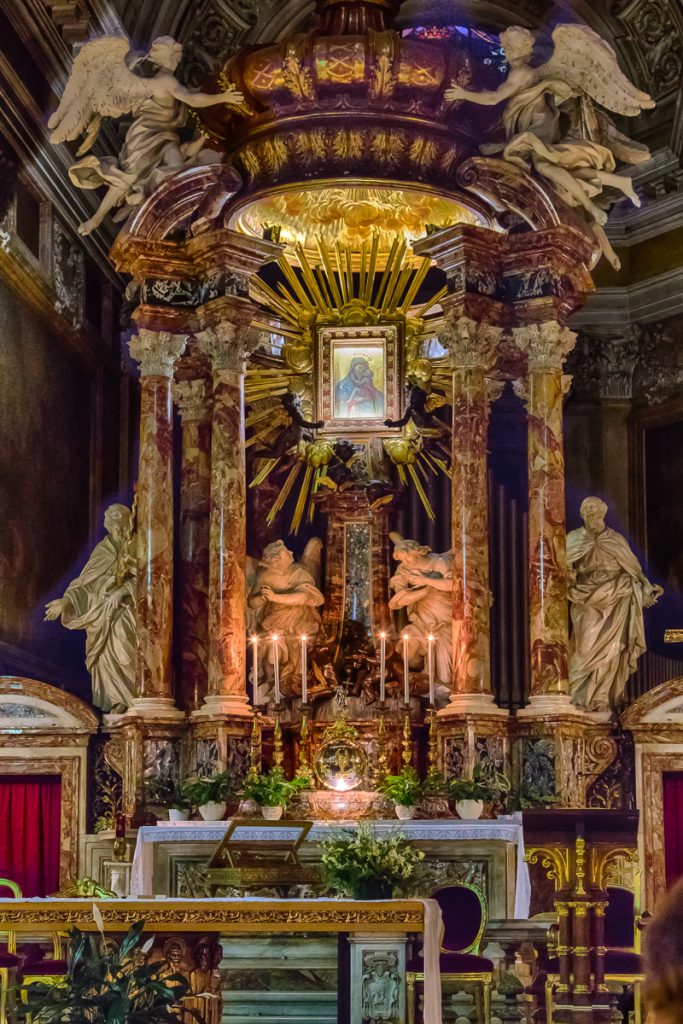 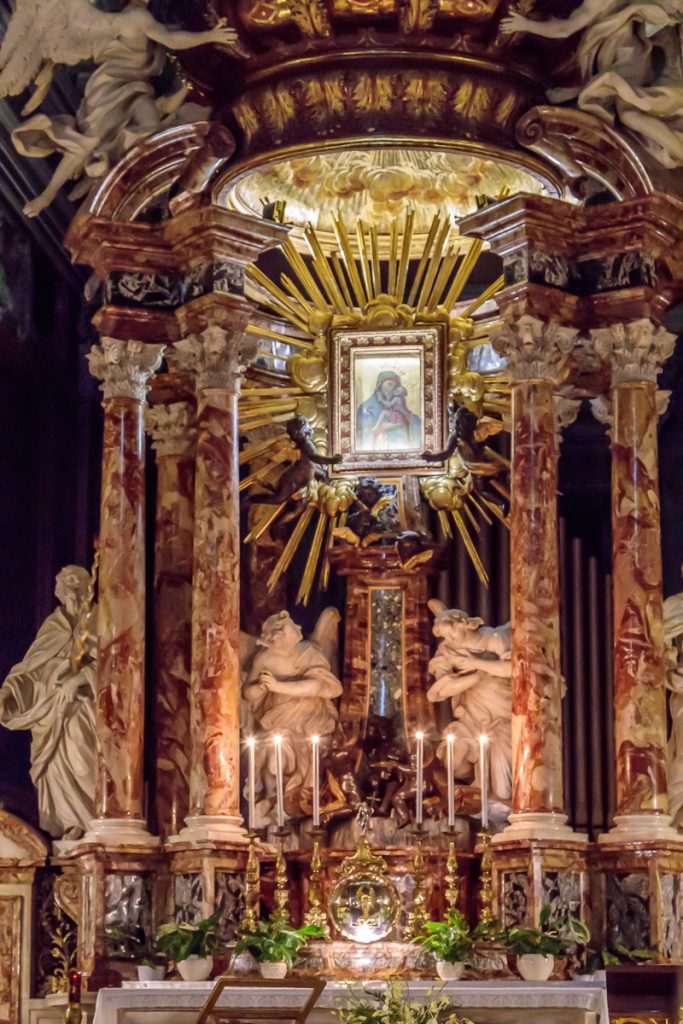 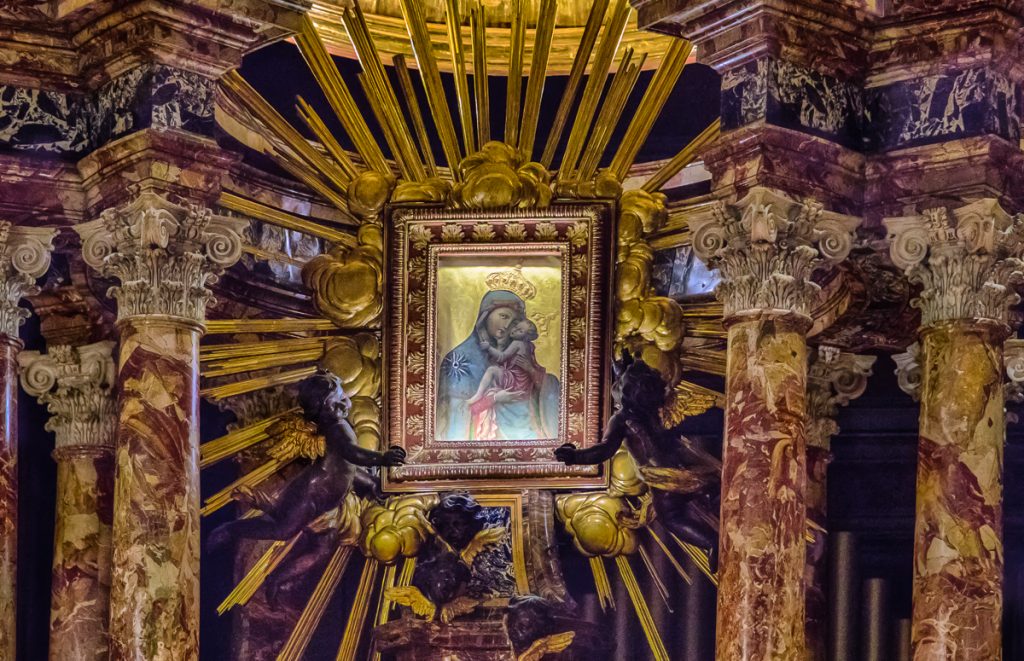 Icon in High Altar of Santa Maria in Traspontina

This is the beautiful crucifix in front of the high altar. 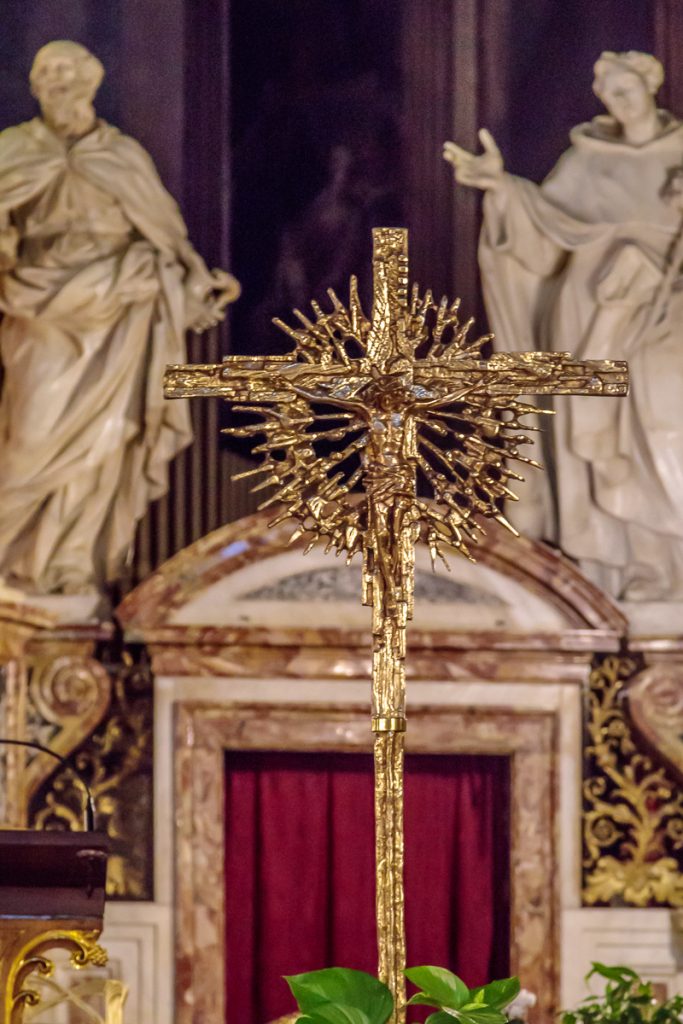 The dome above the high altar. 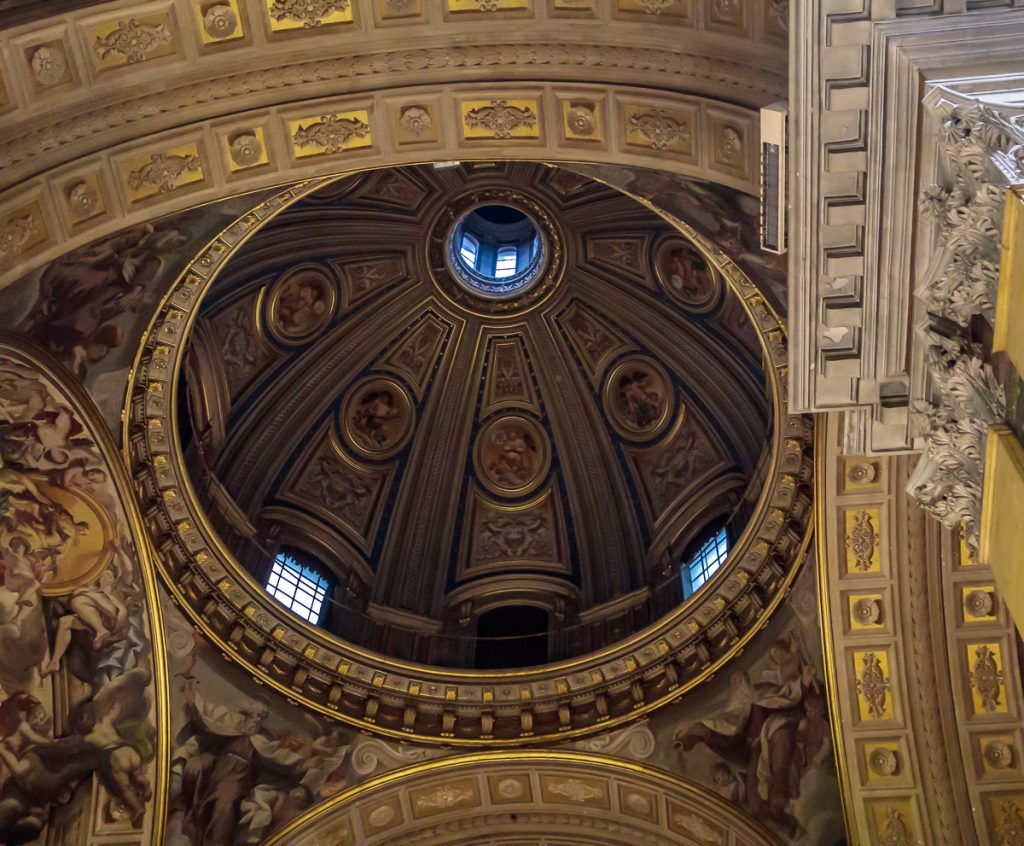 Dome of Santa Maria in Traspontina

A view of the ceiling of the church.

As I’ve said in earlier posts, art is everywhere, not just in the famous cathedrals and museums.

This entry was posted in Travel and tagged Alter, Church, Italy, Rome.