Our tour continues to the Piazza della Signoria.  All descriptions of the buildings and statues below are from WikiPedia.

Palazzo Vecchio (Old Palace) is the town hall of Florence and commands dominance over the Piazza della Signoria.  Construction began in 1299.  The tower rises 94 meters (308 feet) and contains a one-handed clock originally built in 1353, but replaced with a replica in 1667.  The tower also contains two prison cells. 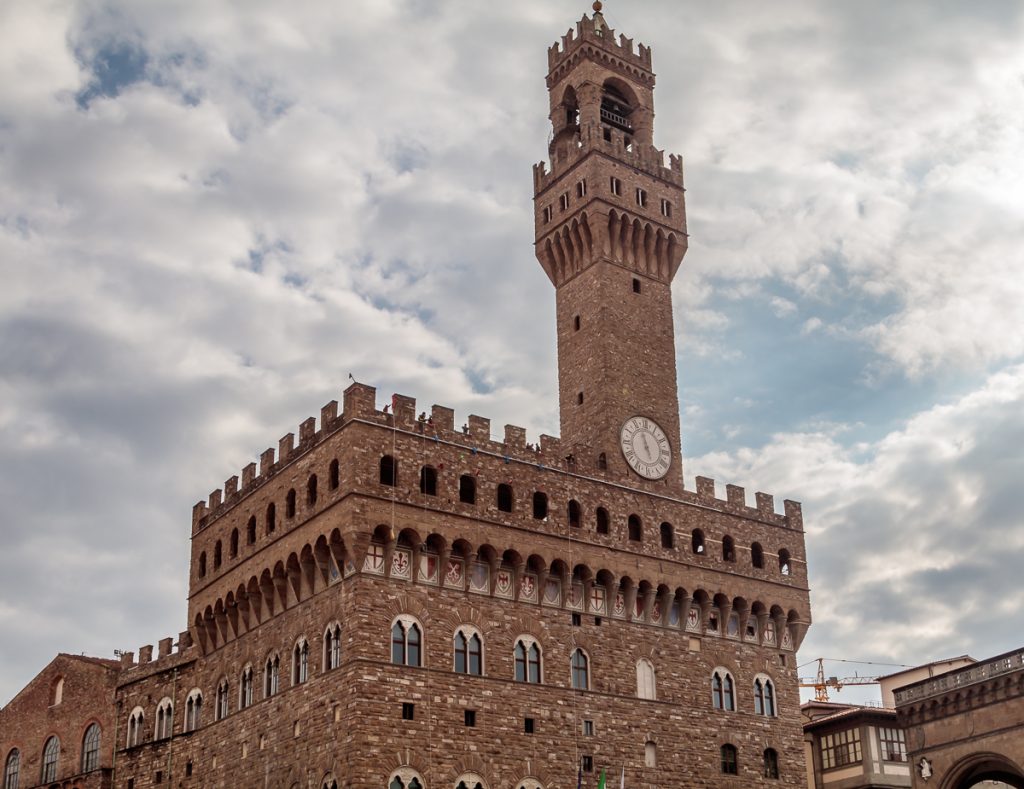 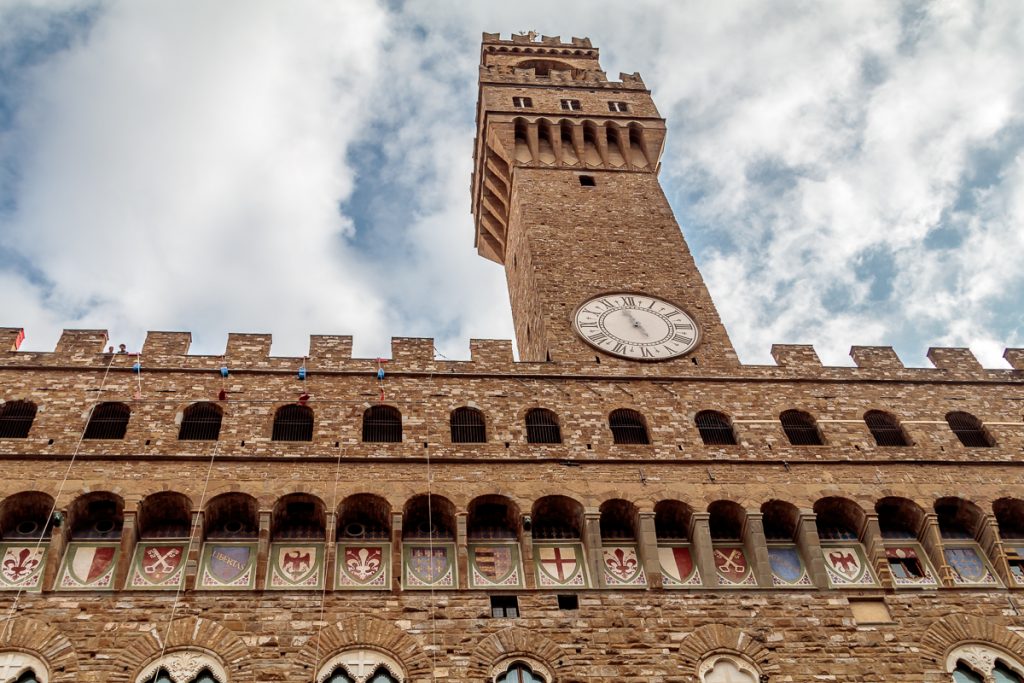 The entrance to the Palazzo contains an ornamental marble frontpiece dating from 1528.  In the middle, flanked by two gilded lions, is the Monogram of Christ, surrounded by a glory, above the text Rex Regum et Dominus Dominantium (King of Kings and Lord of Lords). 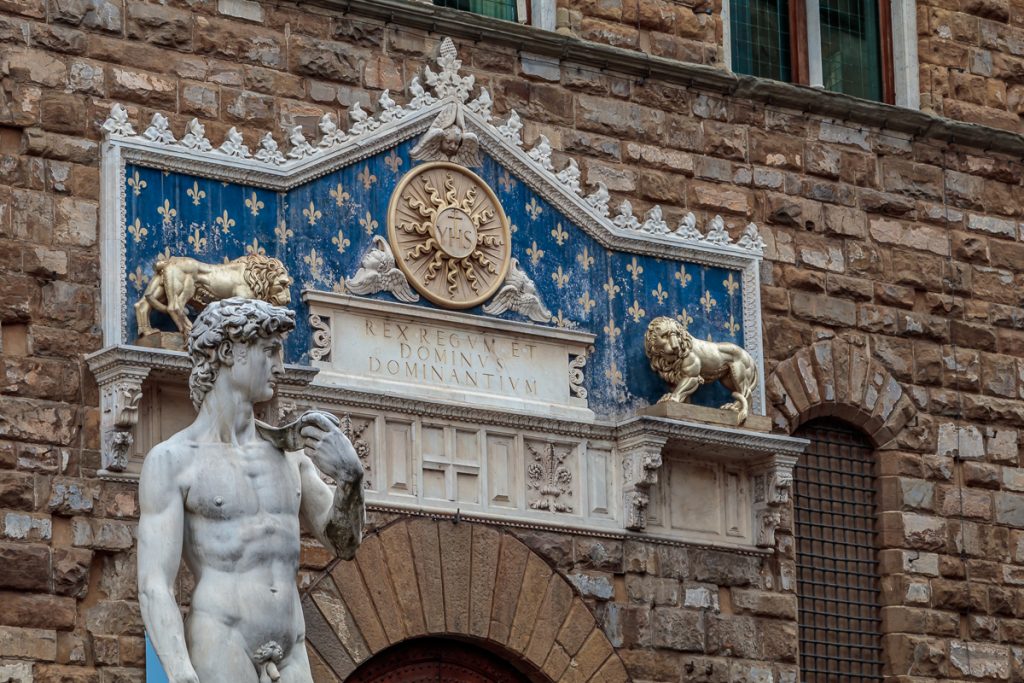 The Piazza contains fountains and many statues.

(Baccio Bandinelli – 1525-1534):  The demi-god Hercules, who killed the fire-belching monster Cacus during his tenth labor for stealing cattle, is the symbol of physical strength. 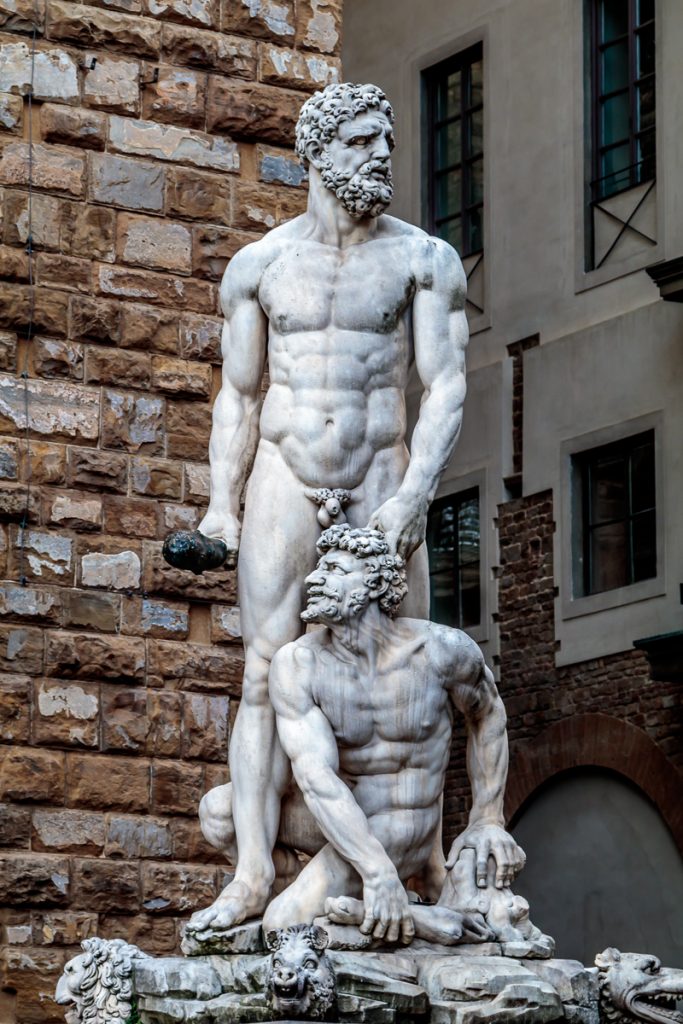 Giambologna‘s equestrian statue of Duke Cosimo I (1595) is an elegant portrait of the man who brought all of Tuscany under Medici military rule. 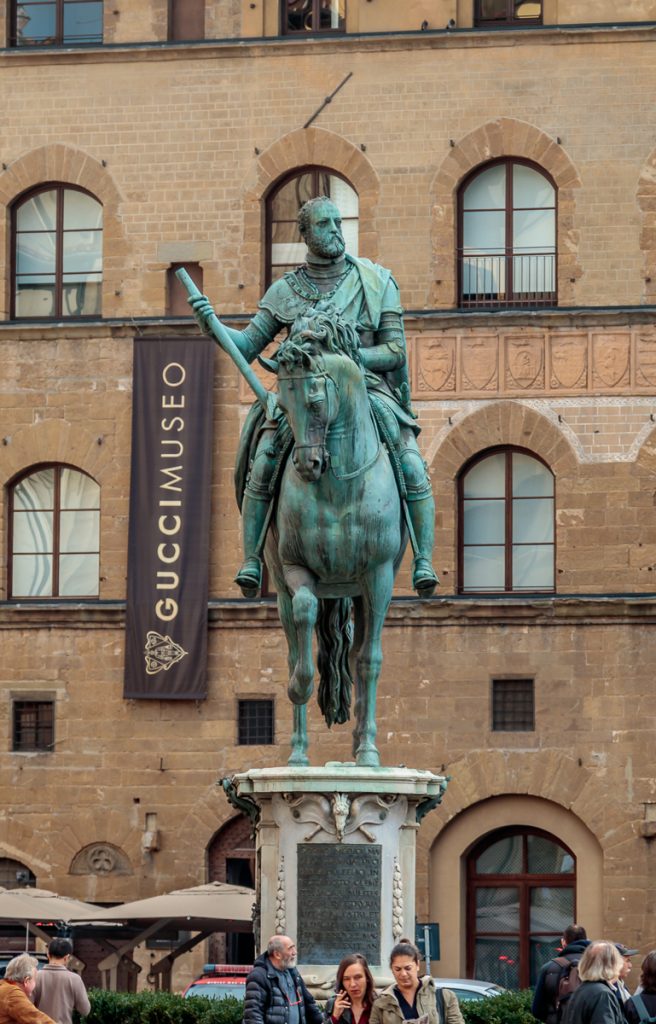 Equestrian Statue of Duke Cosimo I 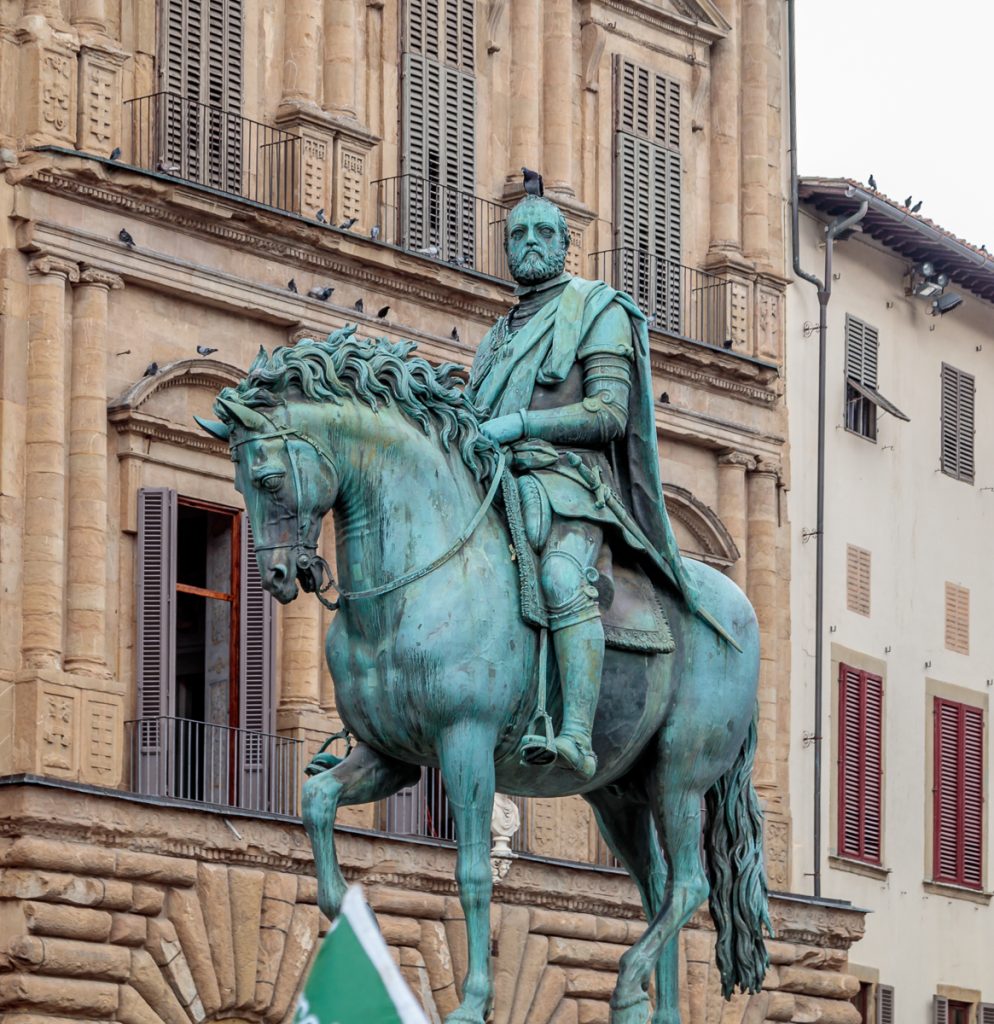 Equestrian Statue of Duke Cosimo I

The Nettuno (1575) by Ammannati: In this fountain of Neptune, the Neptune figure, whose face resembles that of Cosimo I de’ Medici, was meant to be an allusion to the dominion of the Florentines over the sea. The figure stands on a high pedestal in the middle of an octagonal fountain. The pedestal is decorated with the mythical figures of Scylla and Charybdis. 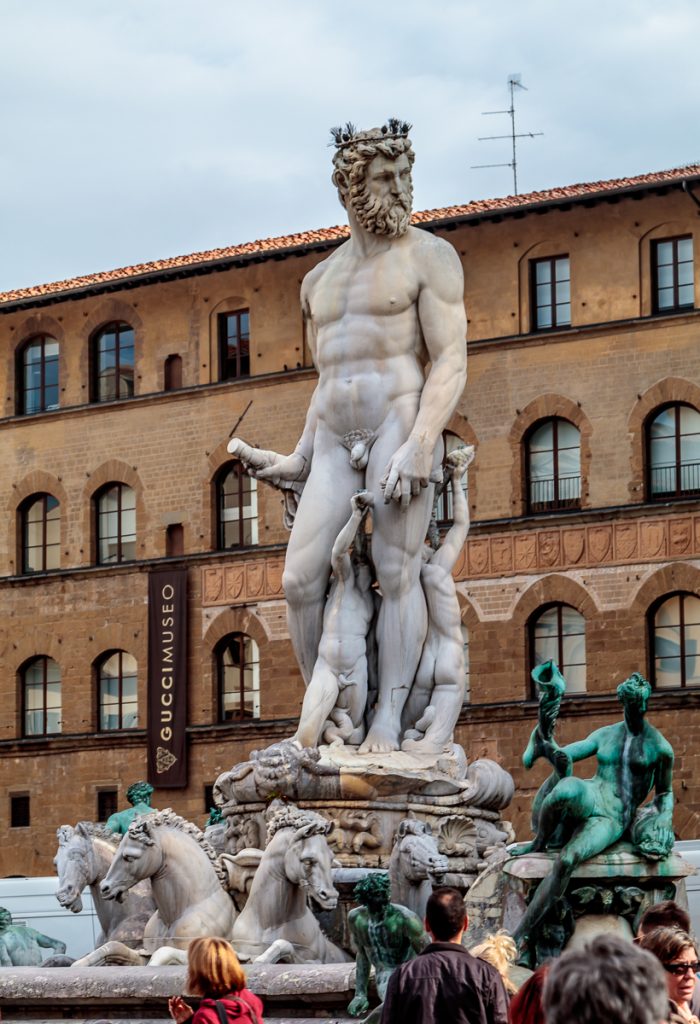 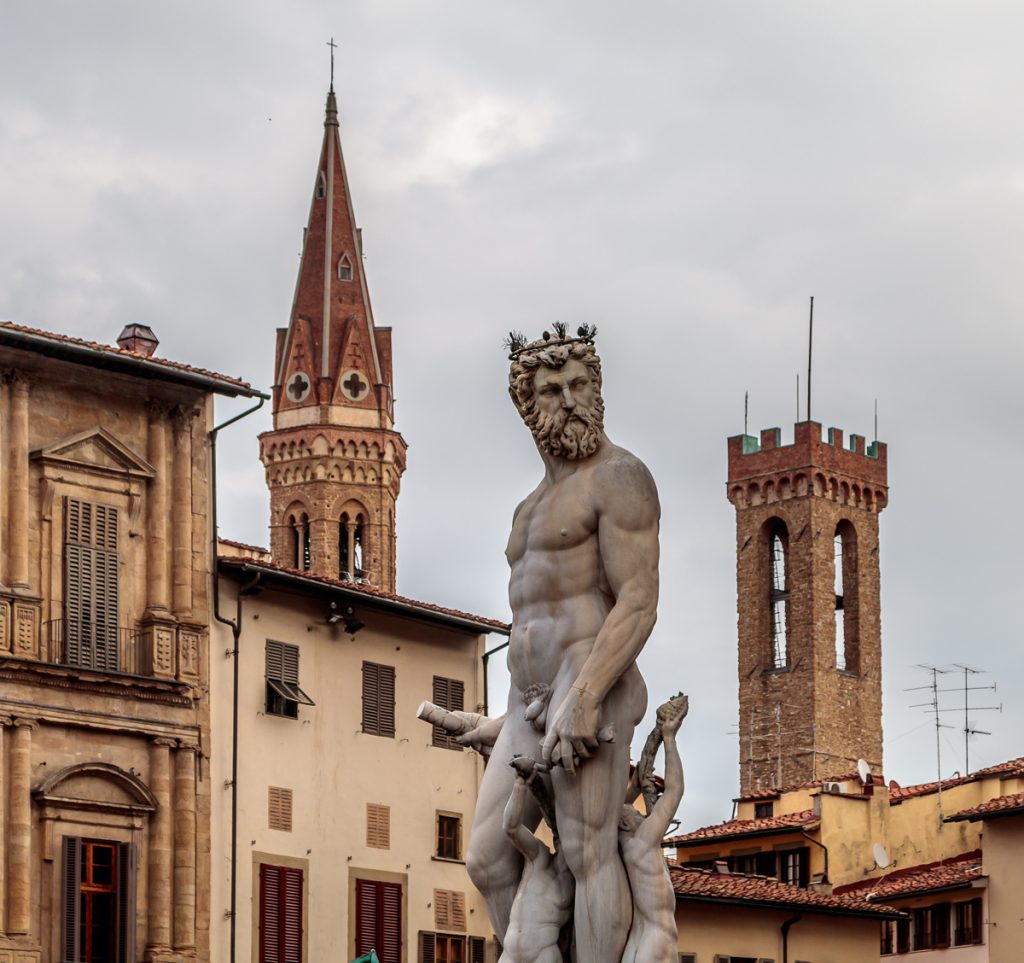 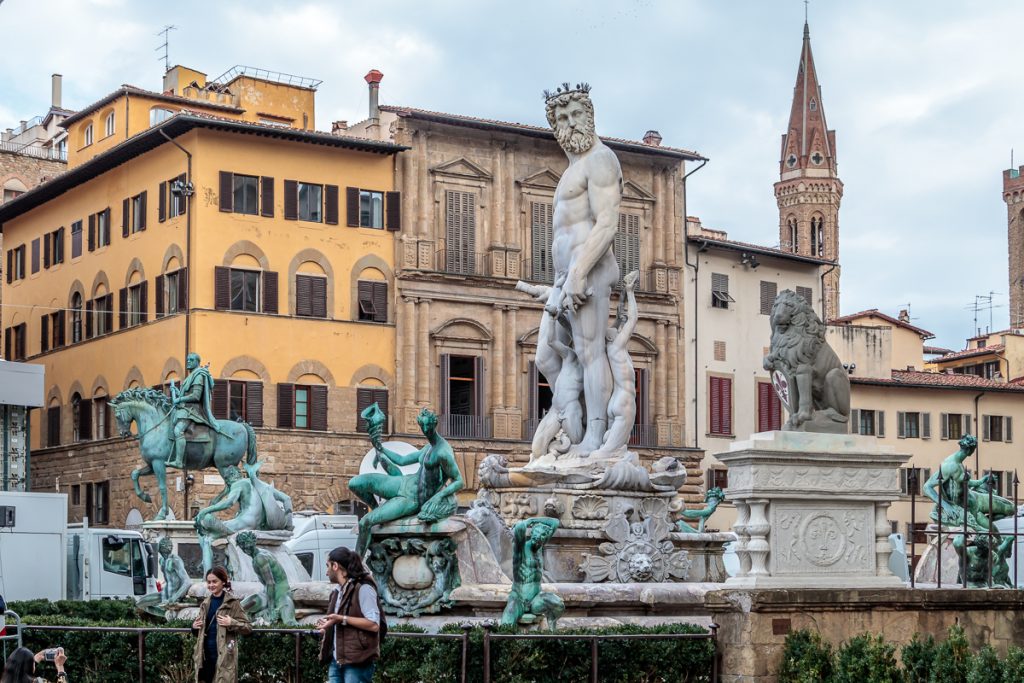 The Rape of the Sabines – This is the final marble statue made from the plaster cast seen in the Accademy Museum. 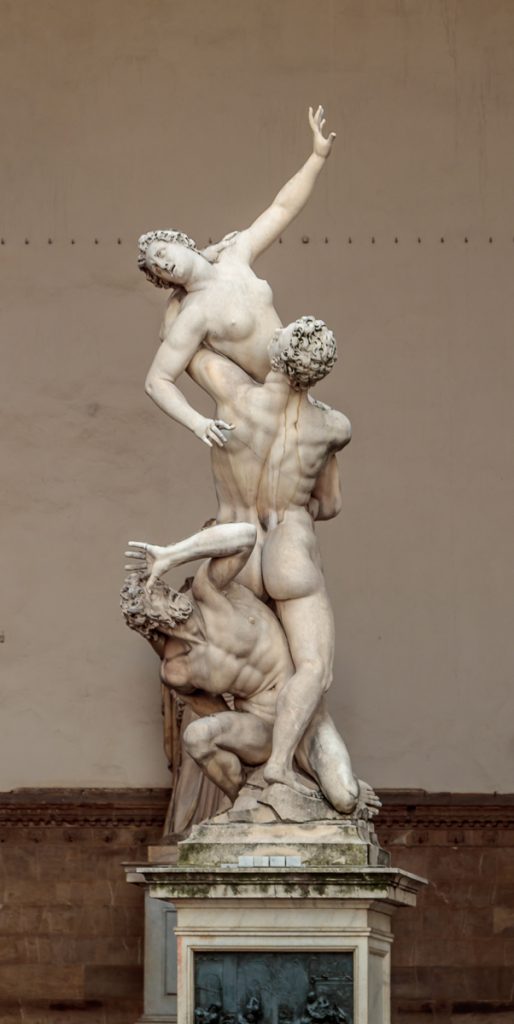 Rape of the Sabines

The Rape of Polyxena (Pio Fedi -1855 – 1865):  The subject of the sculpture is Polissena, youngest daughter of Priam , kidnapped by Pirro to be sacrificed in anticipation of the departure of Greek ships to return from the Trojan War. The violence of the abduction is underlined by the killing of Polyxena’s brother, Polidoro, who fell to defend his sister, and the raised arm of Pyrrhus with the sword that is about to strike a blow to kill the mother of Polyxena, Hecuba, who tries to hold him. 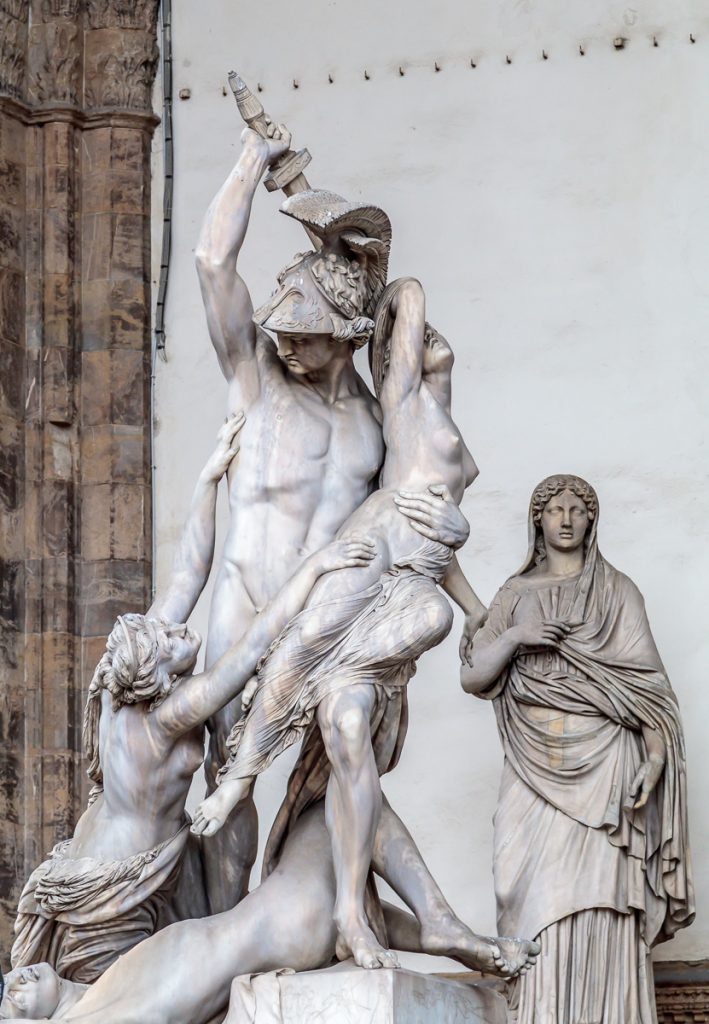 Perseo holding Medusa’s head, by Benvenuto Cellini (1554): This statue is a stark reminder of what happened to those who crossed the Medici. This bronze statue depicts the mythological story of Perseus beheading Medusa, a hideous woman-faced Gorgon whose hair was turned to snakes and anyone that looked at her was turned to stone. Perseus stands naked except for a sash and winged sandals, triumphant on top of the body of Medusa with her snakey head in his raised hand. 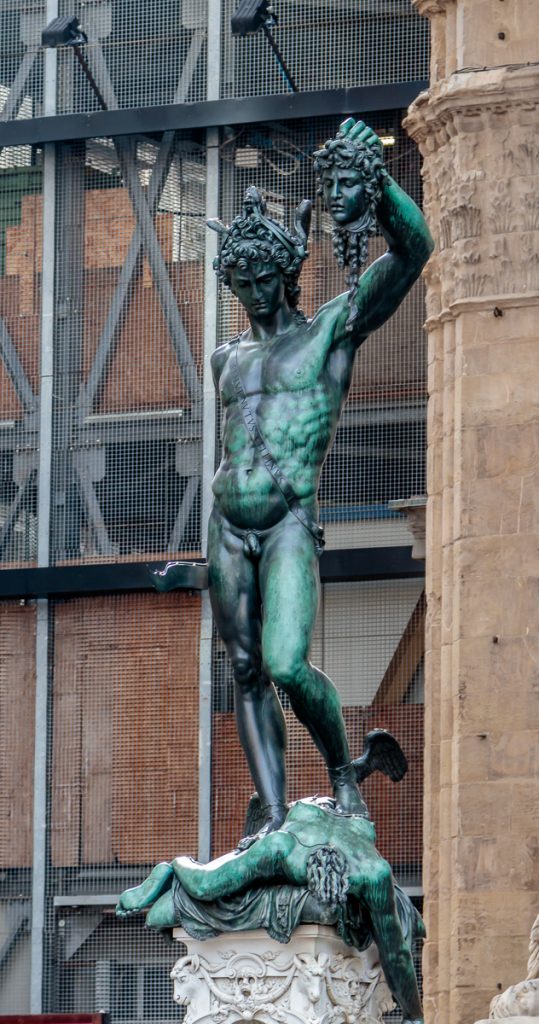 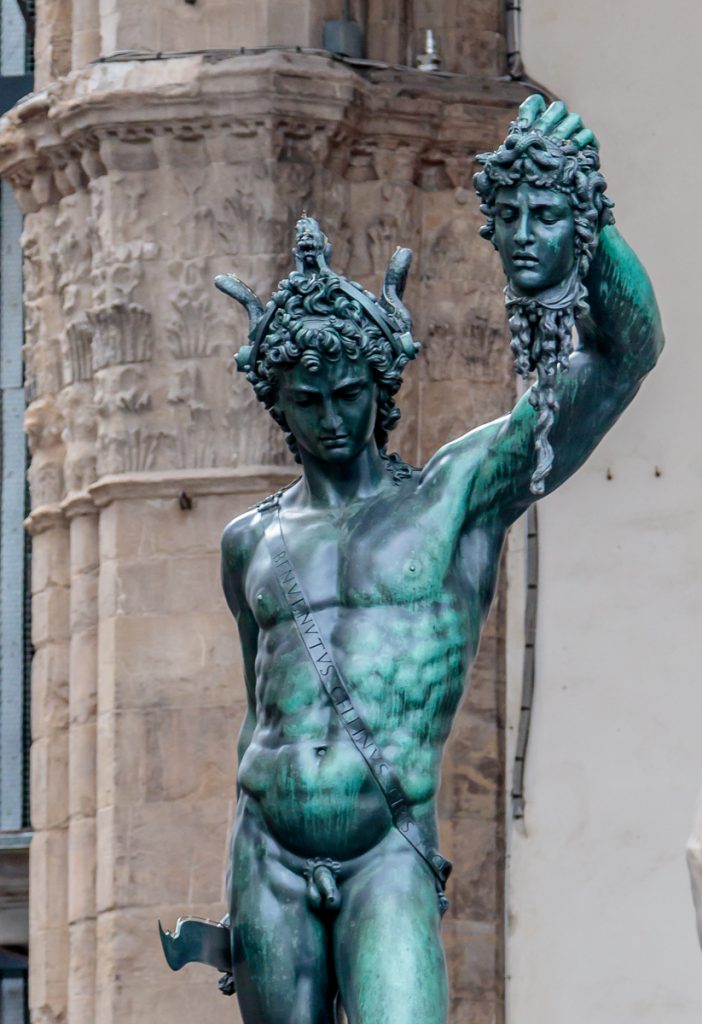 David by Michelangelo – This is a copy of the original that is housed in the Accacemy Museum.  The original stood in this location until the 1800s. 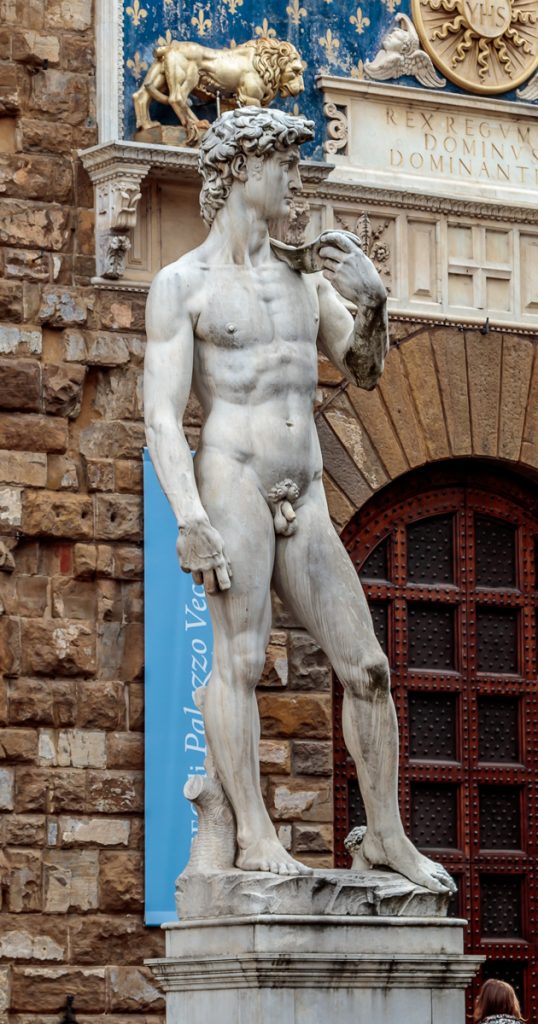 Hercules and the Centaur Nessus (Giambologna, 1599) 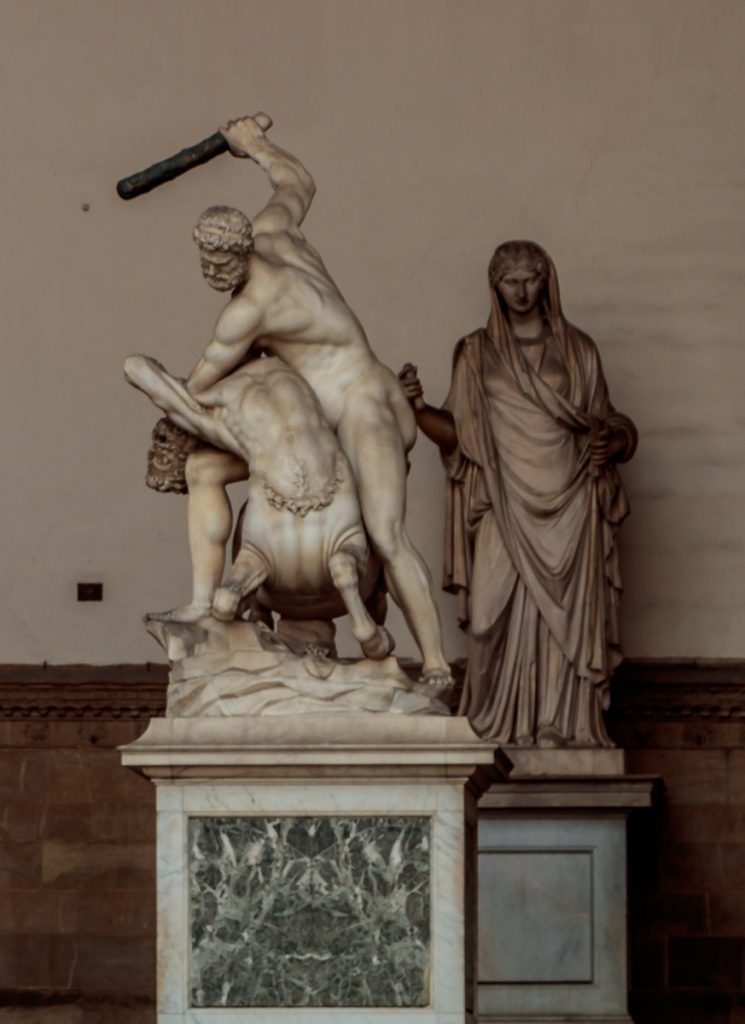 Hercules and the Centaur Nessus

As you can see, this piazza is filled with wonderful statues and fountains, many dating from the 1500s!  I cannot imagine any town square in the US that would leave these art treasures out in the open as they are in Florence.  Of course, some art in the streets of Florence are copies (Michelangelo’s David, the Gates of Paradise on the Baptistery), but most are originals.  Truly amazing.

This entry was posted in Travel and tagged Florence, Italy, Piazza della Signoria.