I’ve got a few more photos from Florence before we leave town.  This is a collection of photos from Piazza di Santa Croce and from the street, scenes that caught my eye, and didn’t fit in with anything else.  There are a few descriptions, but mostly only photo titles.

The Basilica di Santa Croce (Basilica of the Holy Cross) is the principal Franciscan church in Florence and the largest Franciscan church in the world.  It is the burial place of many famous Italians, such as Michelangelo, Galileo, Machiavelli, Dante, and Enrico Fermi, along with at least a dozen others.  Construction began in 1294 and the basilica was consecrated in 1442.  The bell tower was build in 1842, replacing an earlier one that was damaged by lightning.  (WikiPedia) 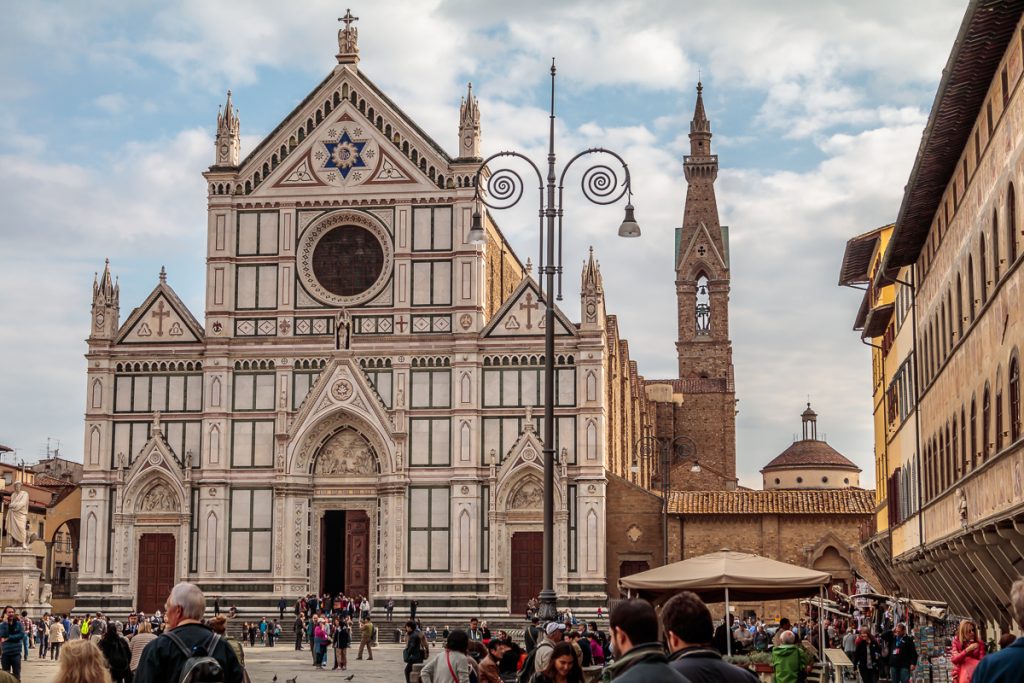 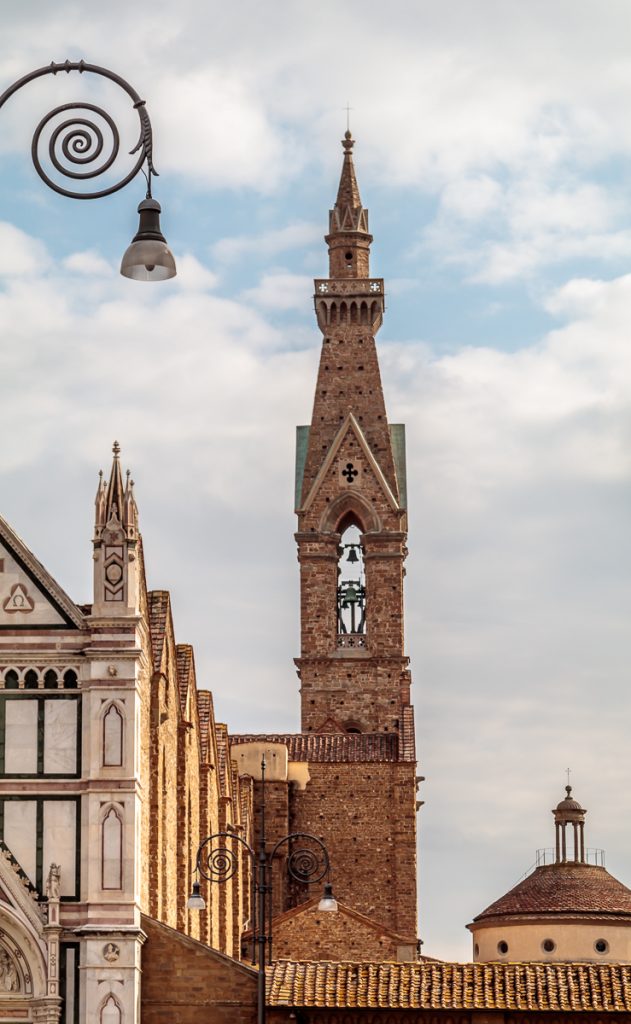 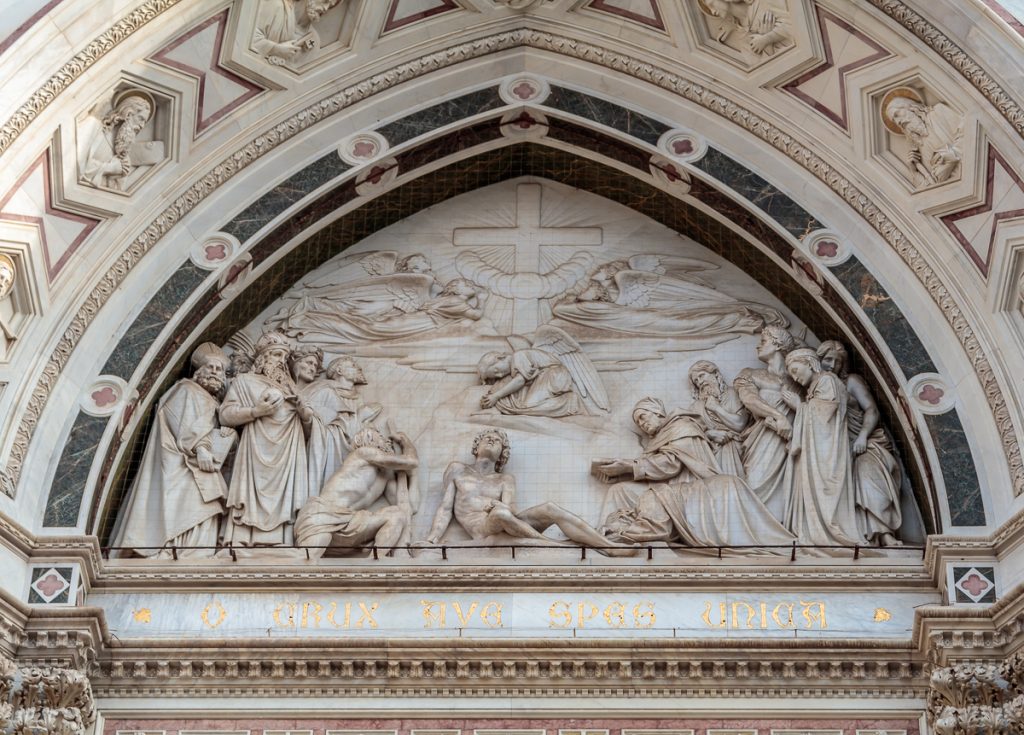 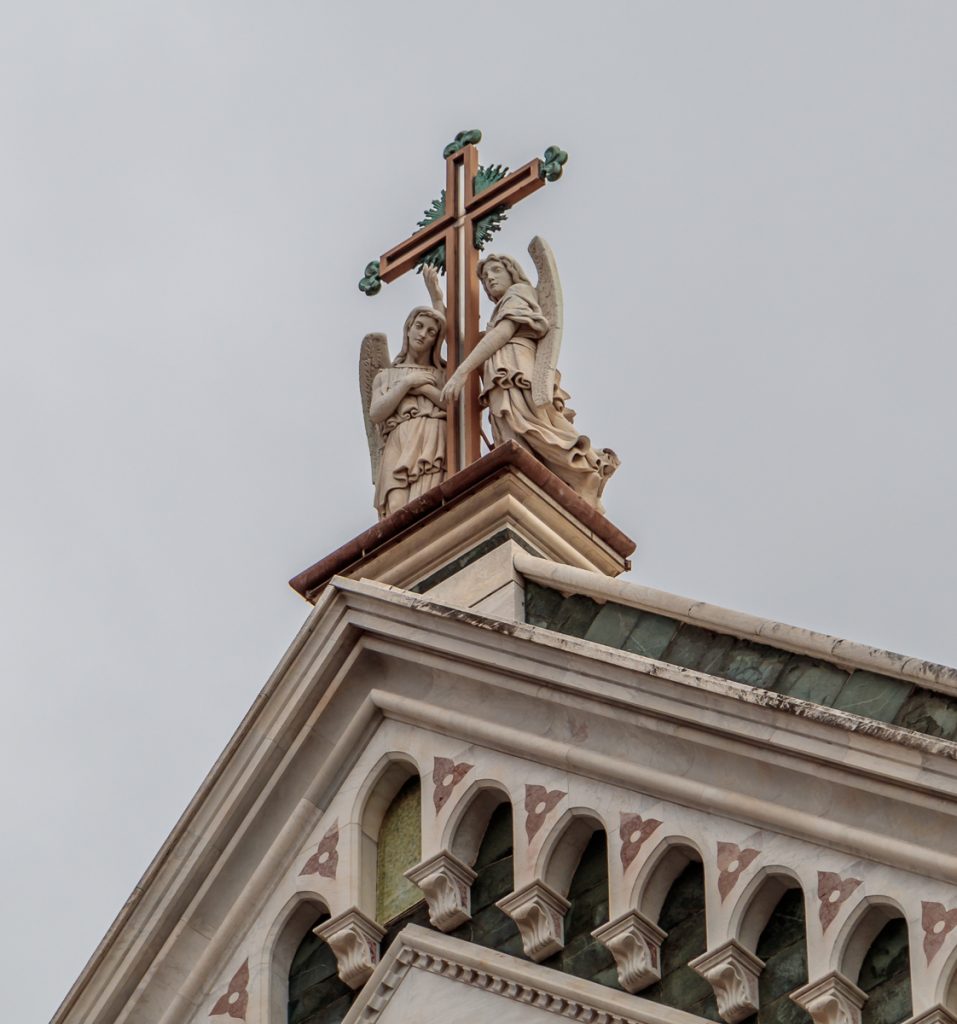 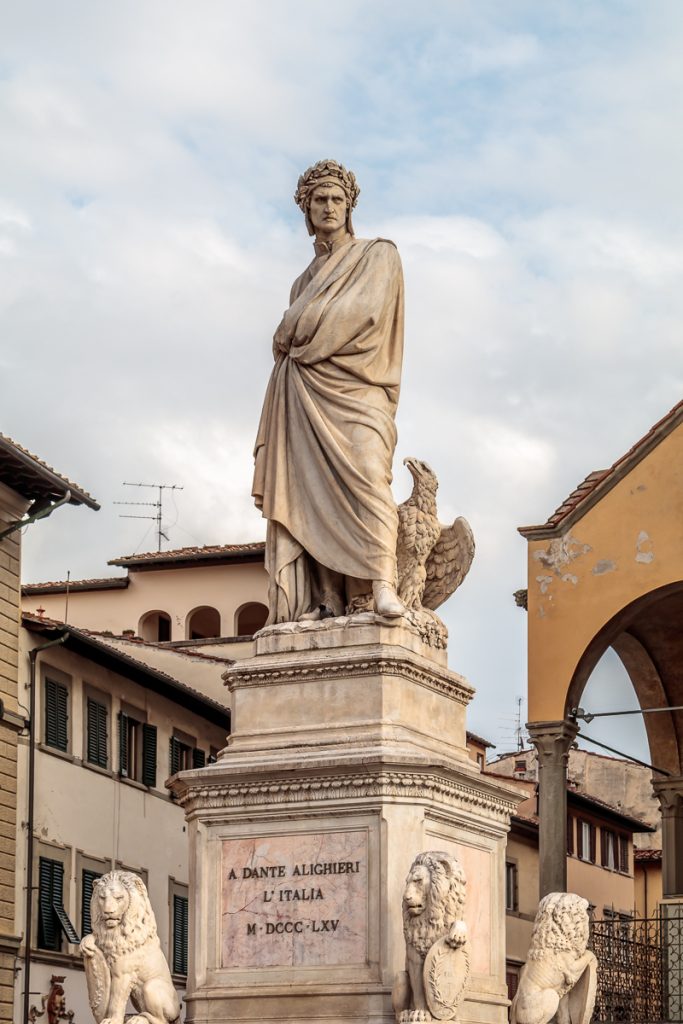 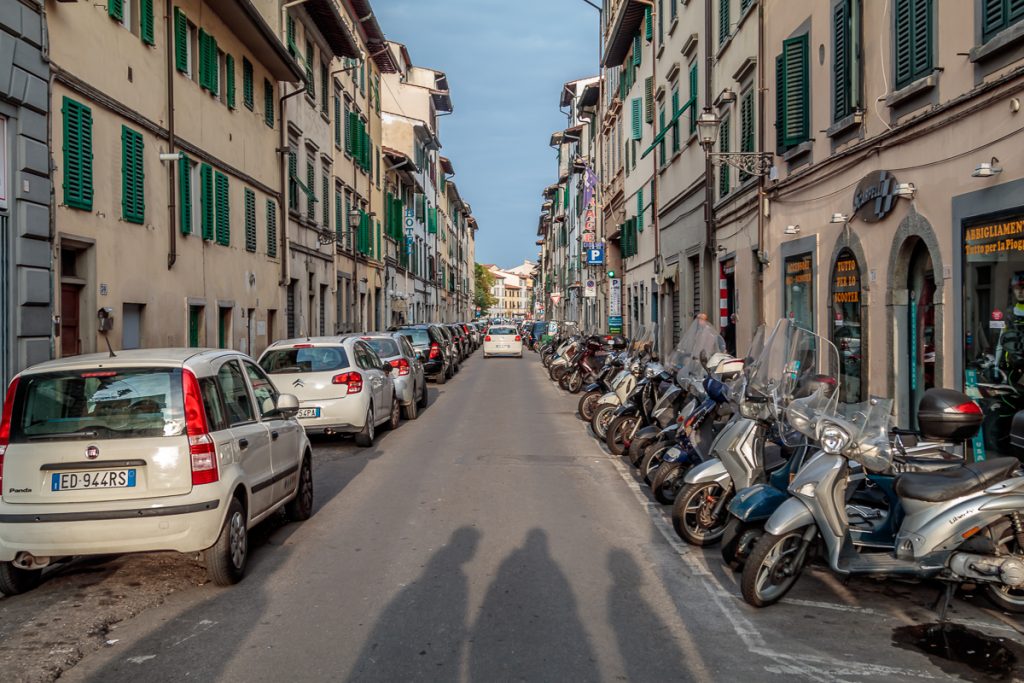 Walking through the streets, we came upon a marching band tuning up.  There was a celebration in town commemorating the anniversary of a major flood. 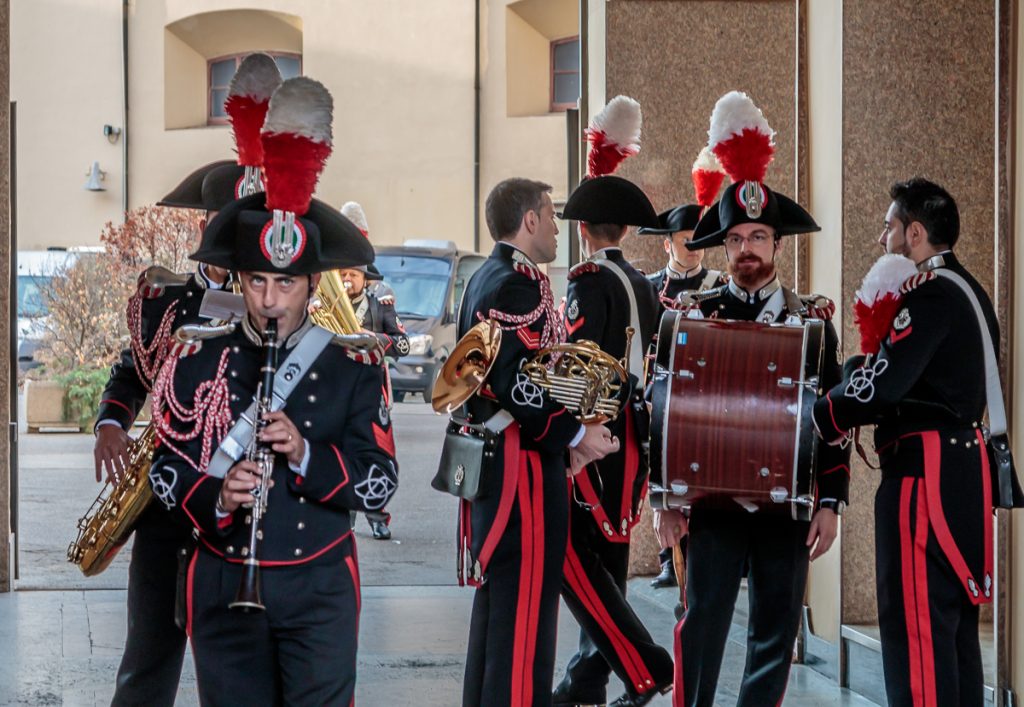 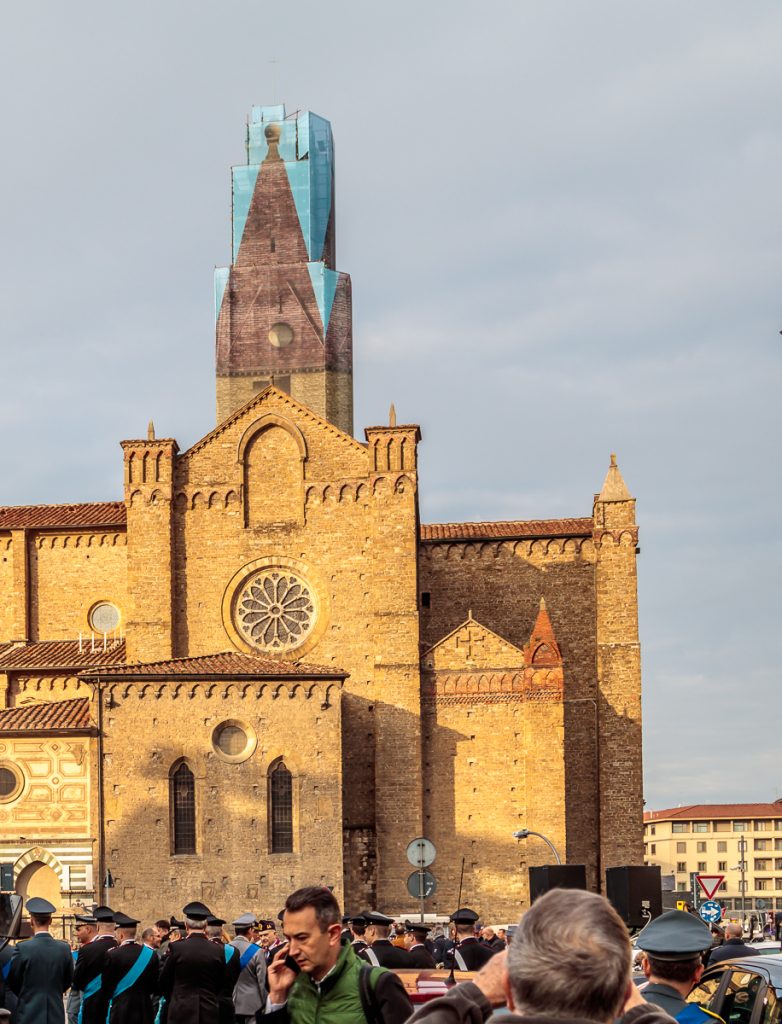 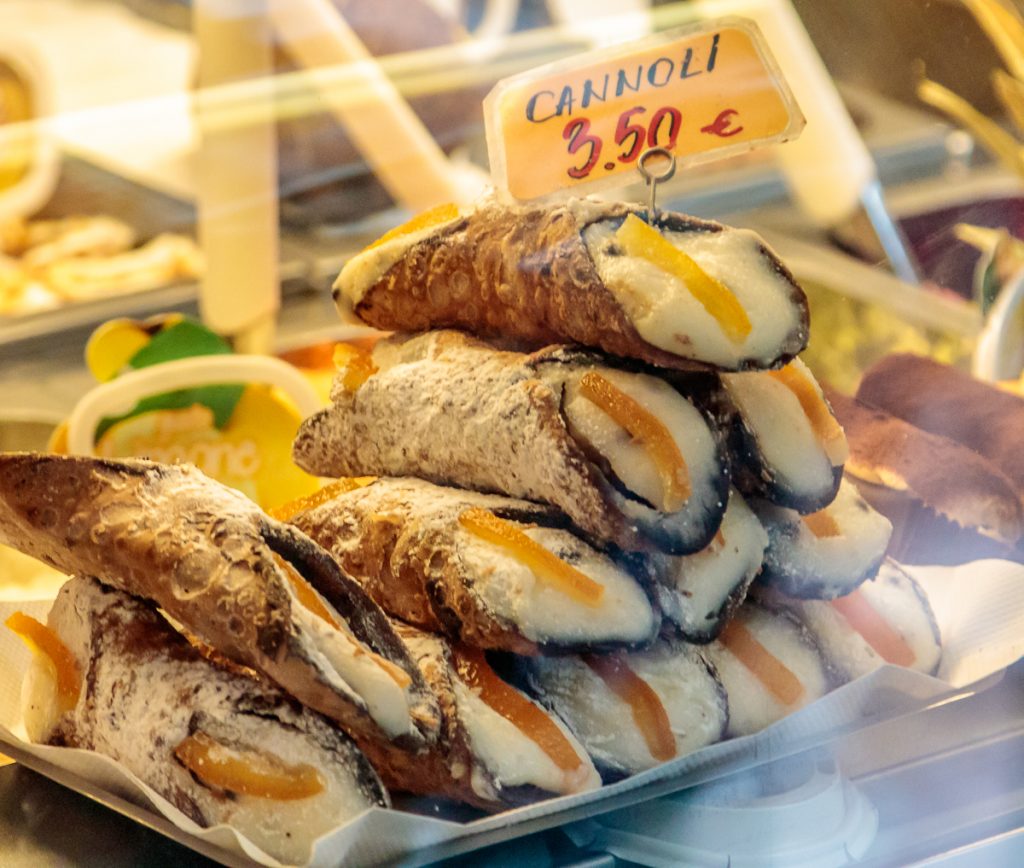 Cannoli in the Window 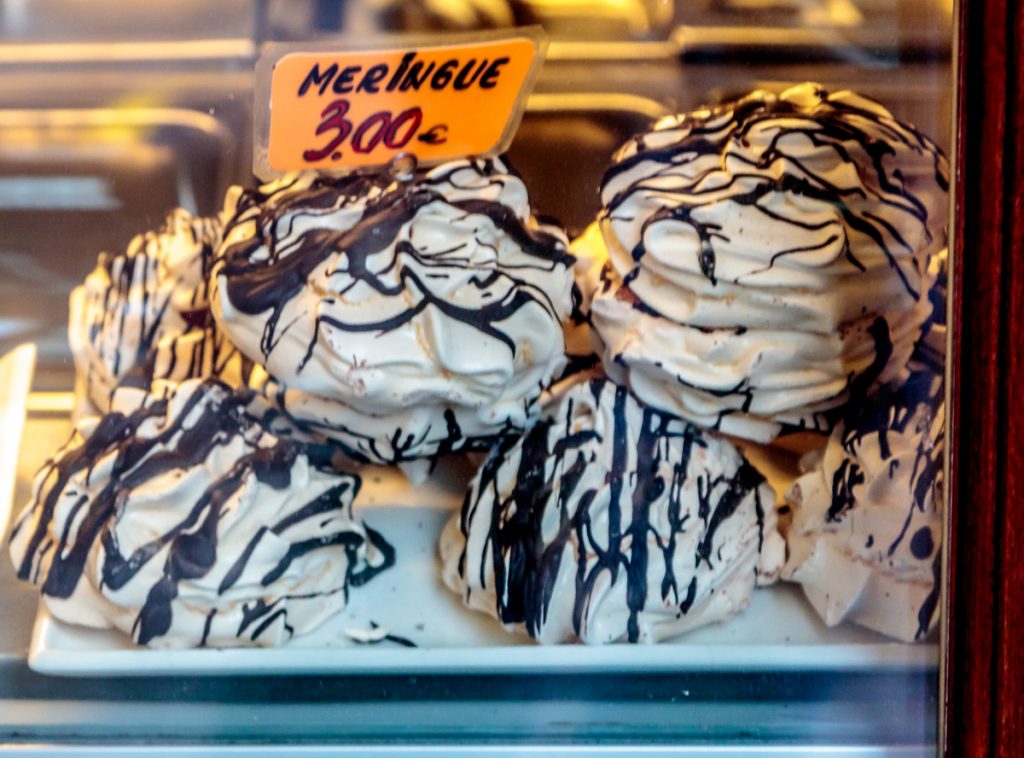 Our local tour guide has been recommended by Rick Steves. 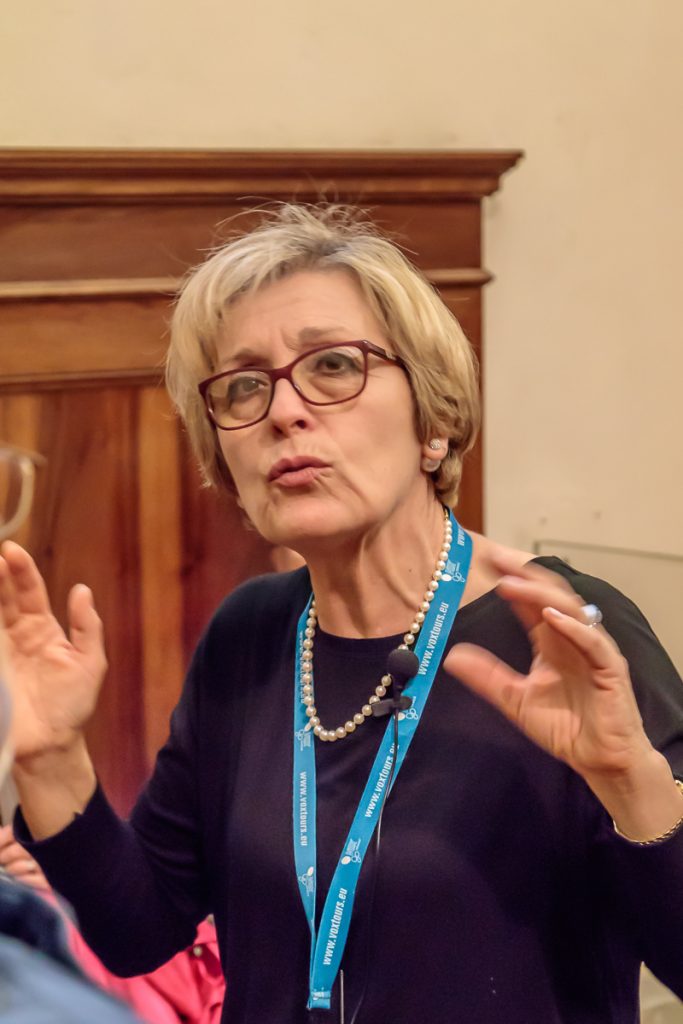 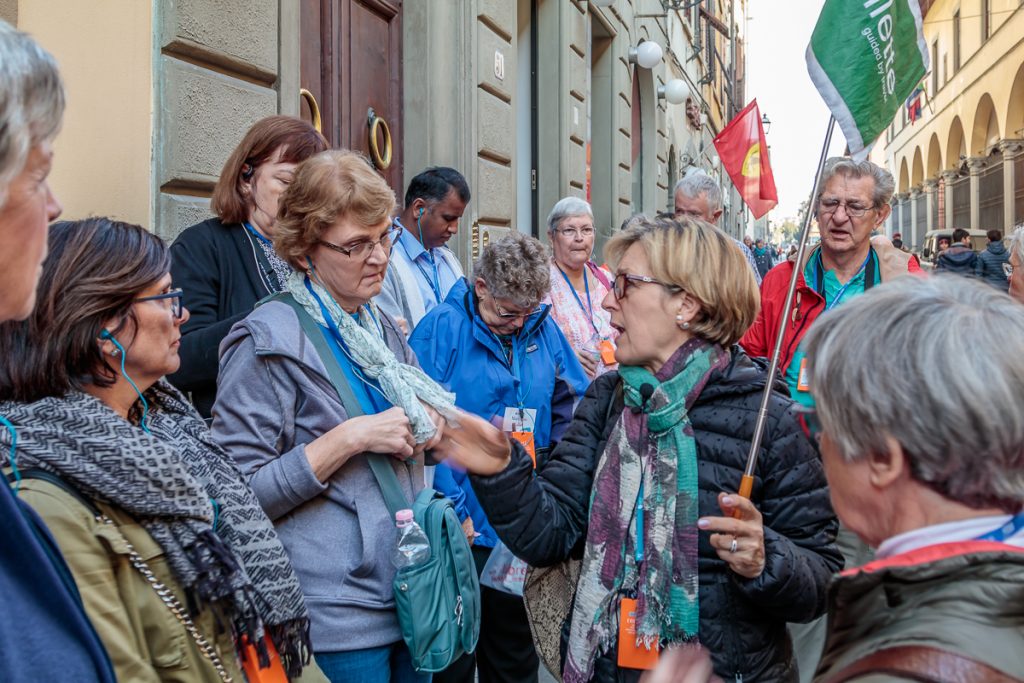 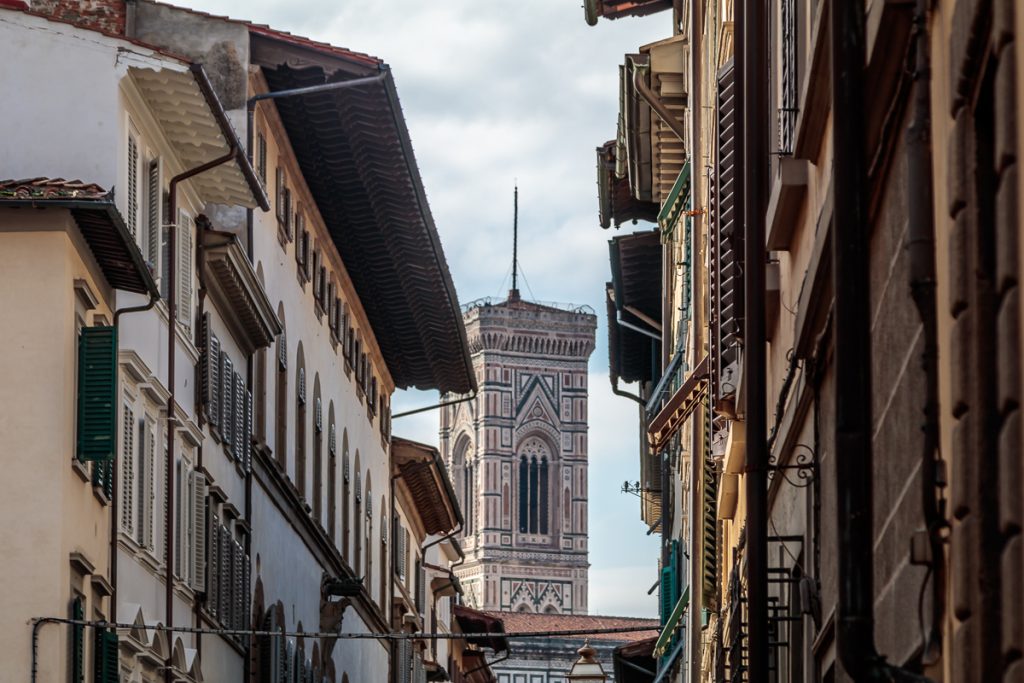 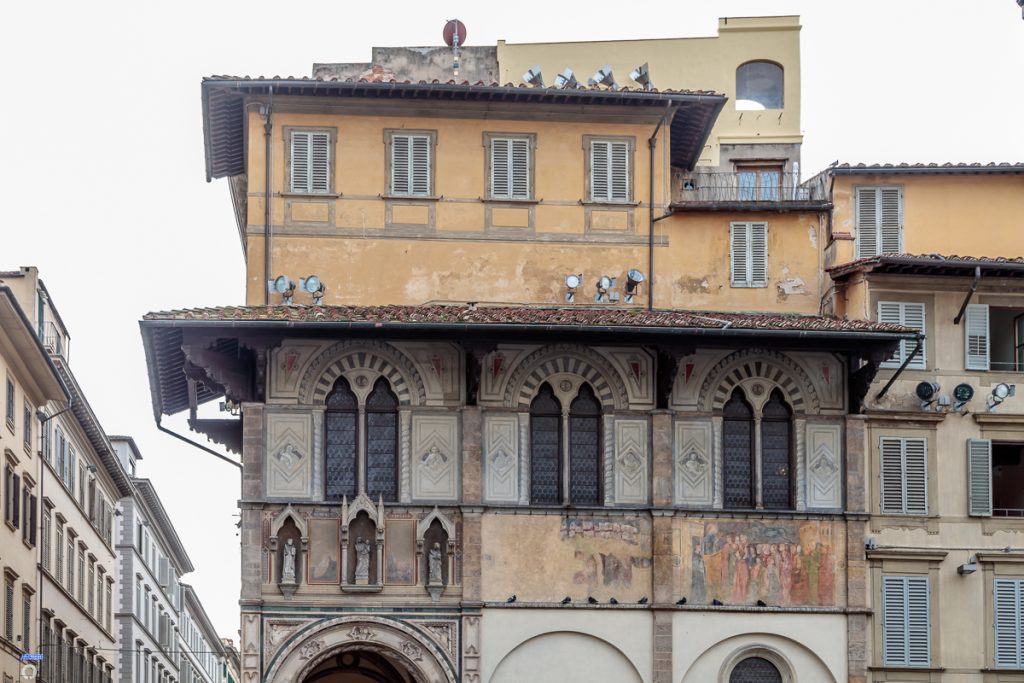 This arch has an inscription of “l’antico centro della città da secolare squallore a vita nuova restituito” which translates to “the ancient city center from centuries-old squalor returned to life”.  No sign of squalor any longer.  It appears to be dated 1895. 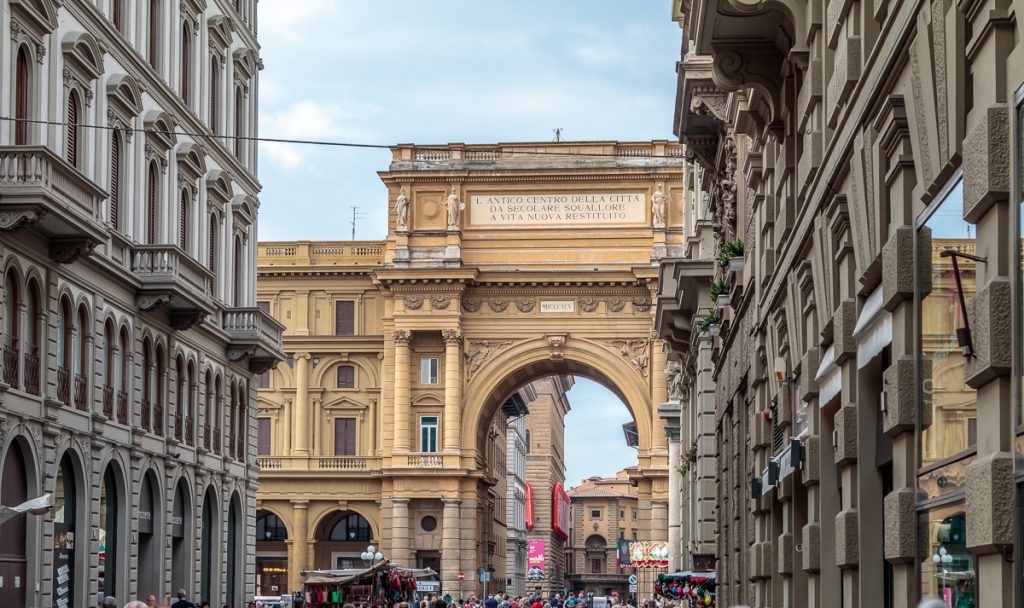 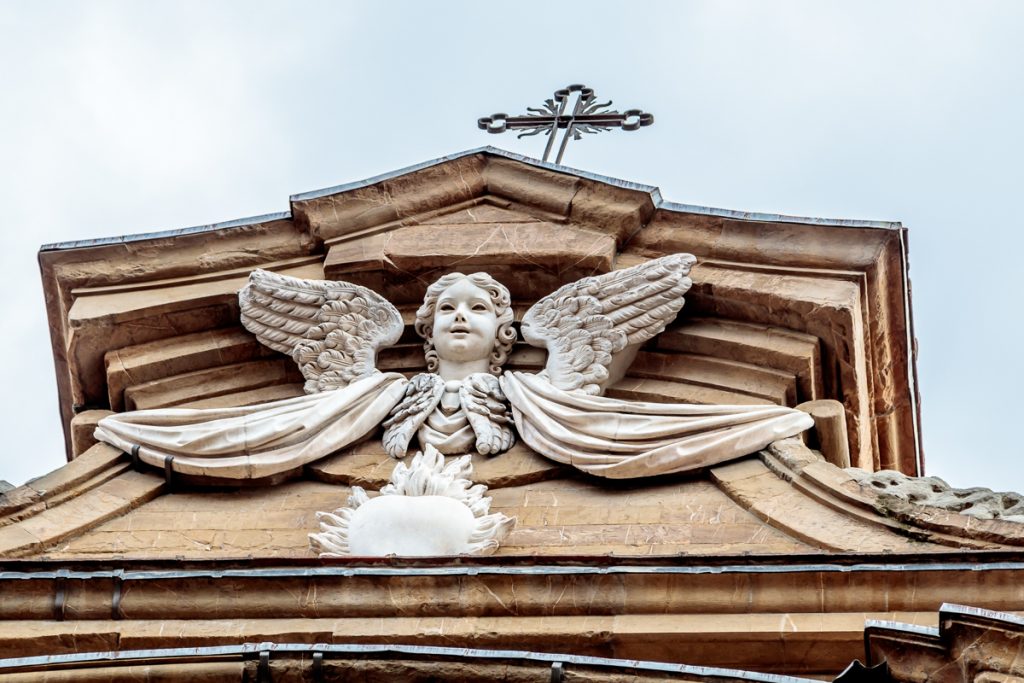 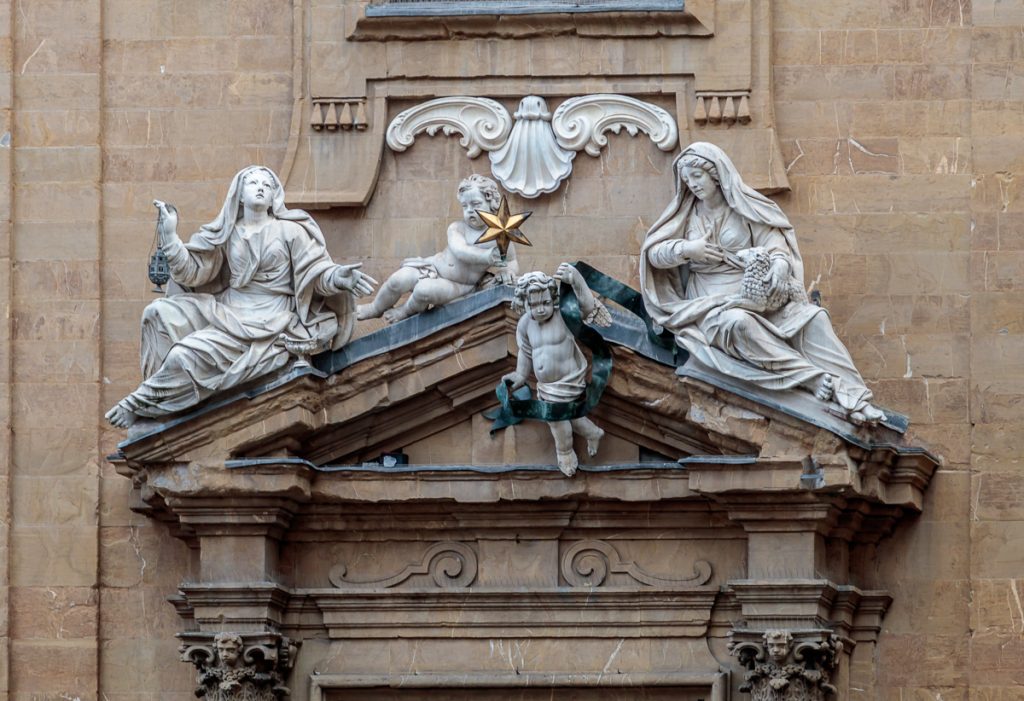 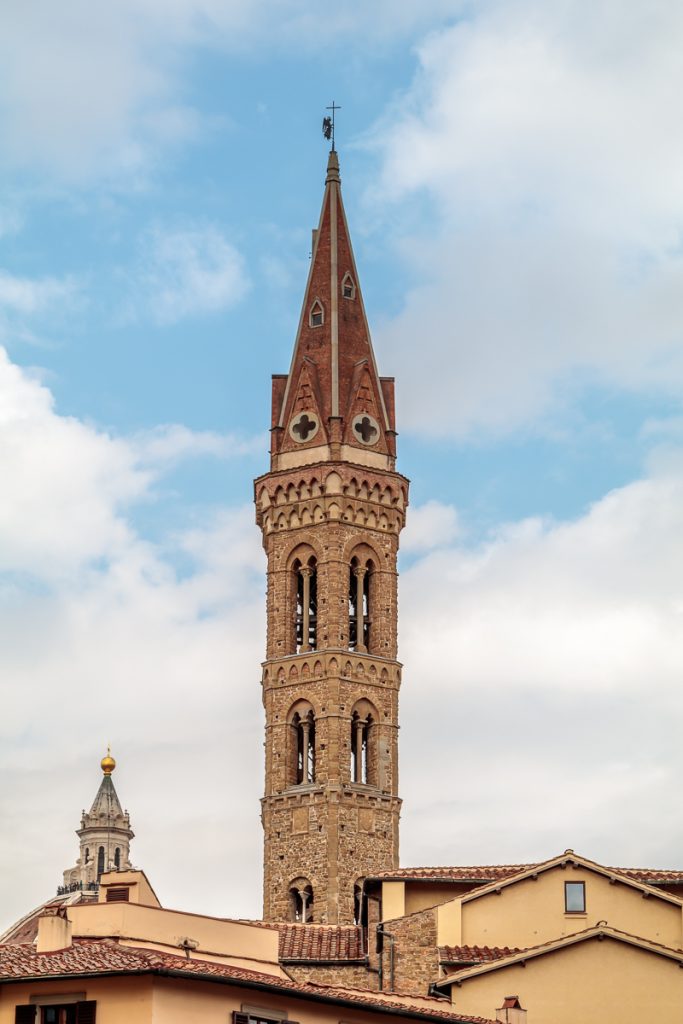 Part of our tour was to a leather shop where genuine Florence leather goods are made and sold.  The proprietor (orange shirt to the left) wanted to demonstrate the versatility of a very nice leather jacket and pulled Janet out of our group as a model.  It was a very nice jacket modeled beautifully by Janet.  By the way, Dale, her husband is shown reflected in the mirror wearing the blue jacket.  It looks like he is thinking “I wonder what this is going to cost me?” 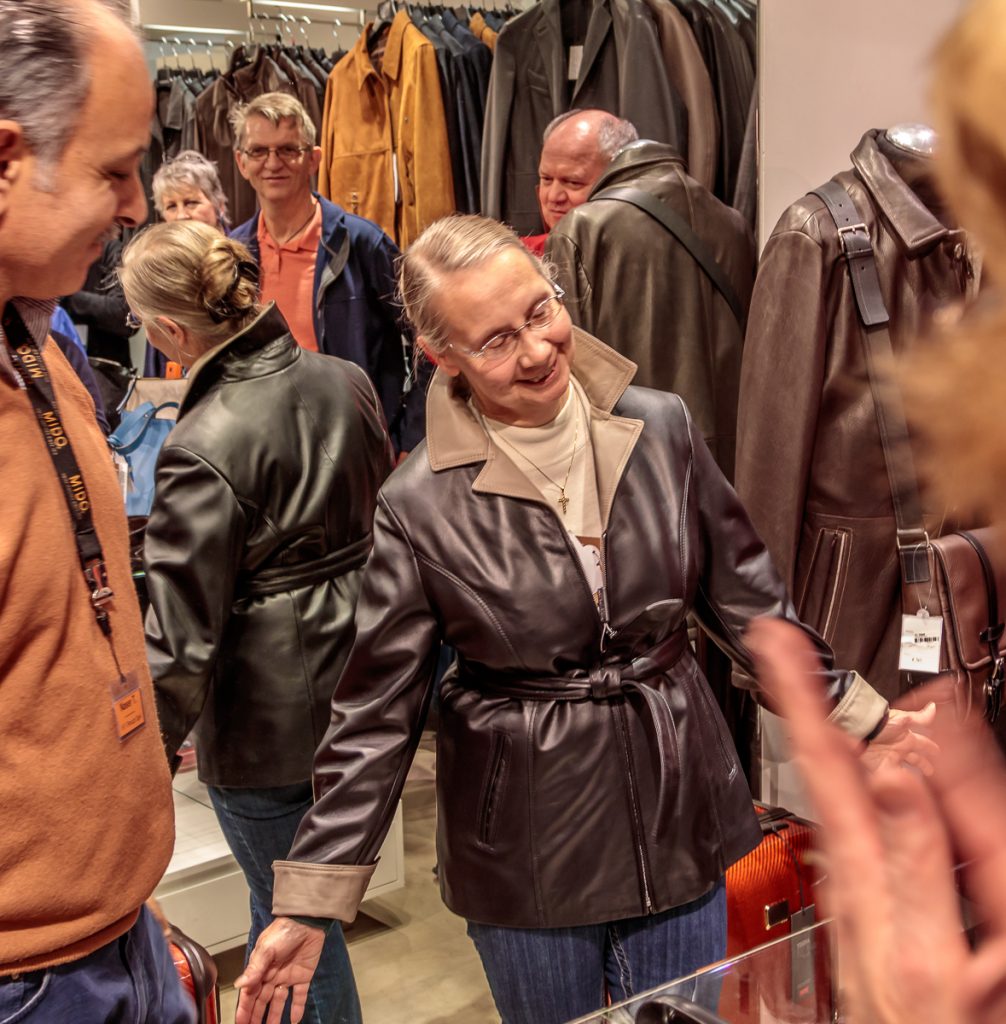 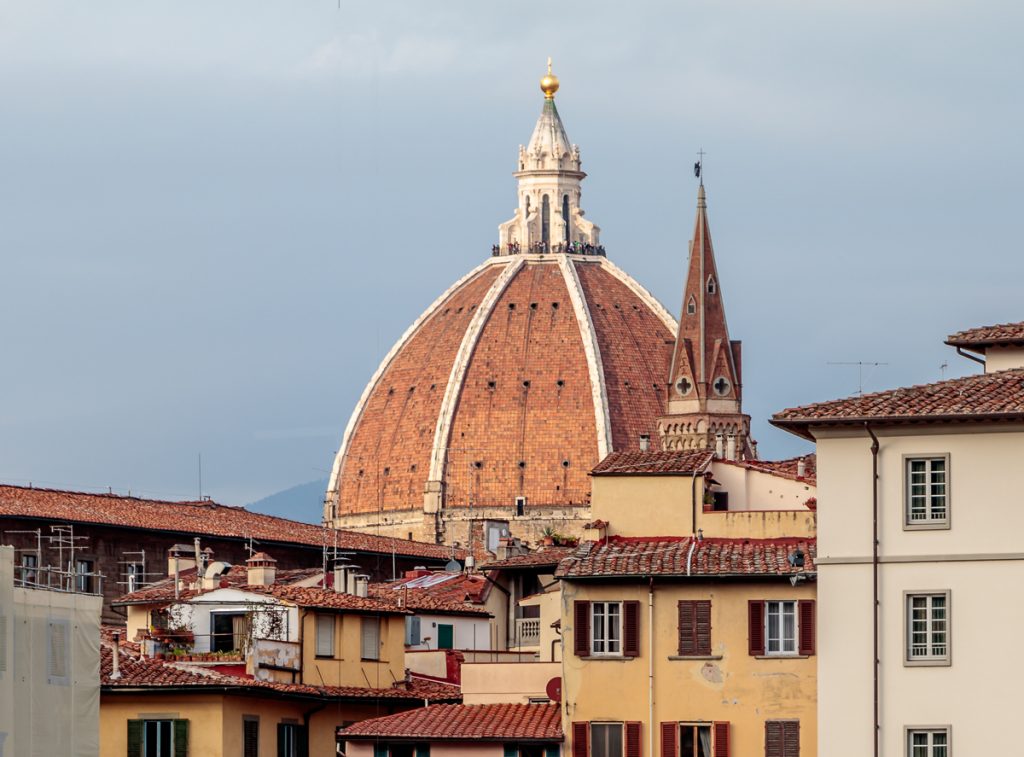 Ponte Vecchio – This is the oldest bridge in Florence.  The original bridge was build prior to 966, but was rebuilt in 1345 after a flood damaged the original.  It was the only bridge across the River Arno until 1218 and is the only bridge across the Arno that the Germans did not destroy.  Instead, they demolished medieval buildings on either side to prevent crossing the river.  The bridge was built as a means of defense, and the windows and artistic elements that we can admire now were added after the shops were sold to the merchants sometime in the 13th century.  Initially, there were all types of shops, including butchers and fishmongers and, later, tanners, whose “industrial waste” caused a pretty rank stench in the area.  In 1593, Ferdinand I decreed that only goldsmiths and jewelers be allowed to have their shops on the bridge in order to improve the wellbeing of all, including their own as they walked over the bridge.  Today, this bridge is still known for its gold.  https://www.visitflorence.com/florence-monuments/ponte-vecchio.html 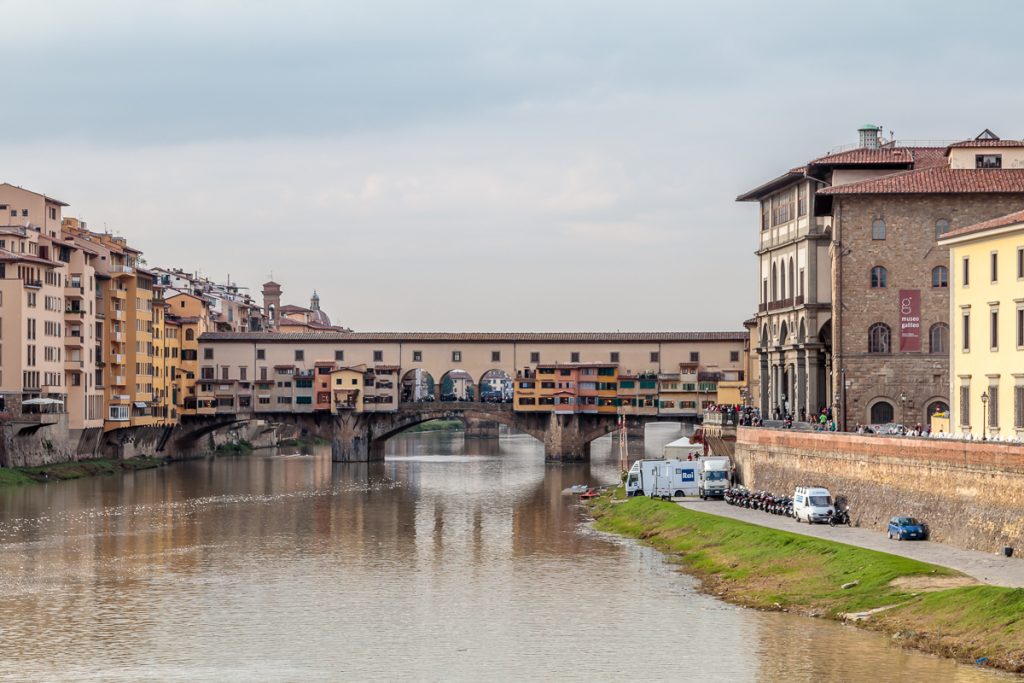 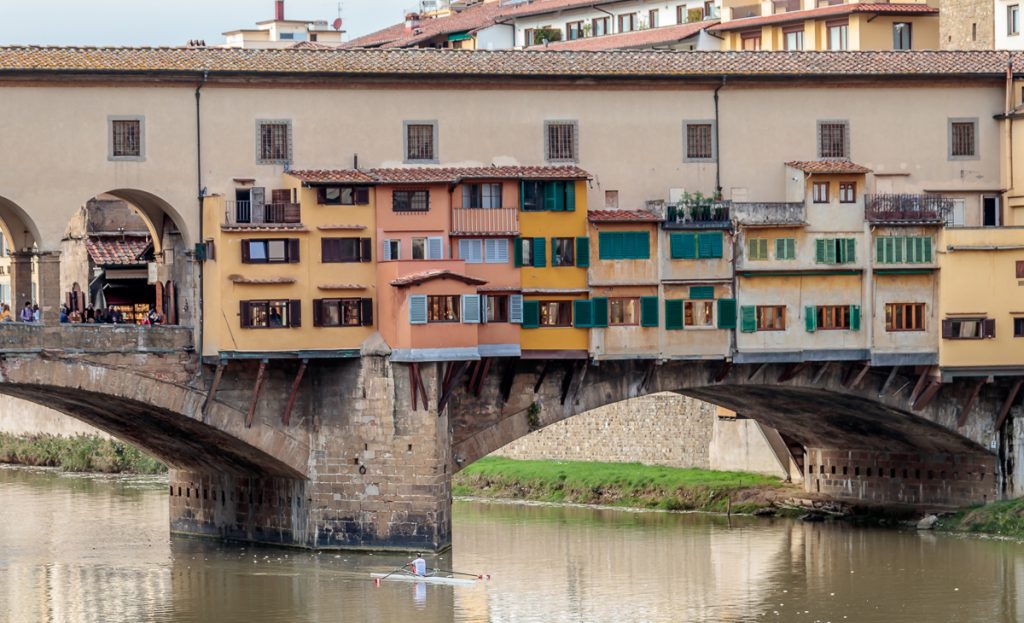 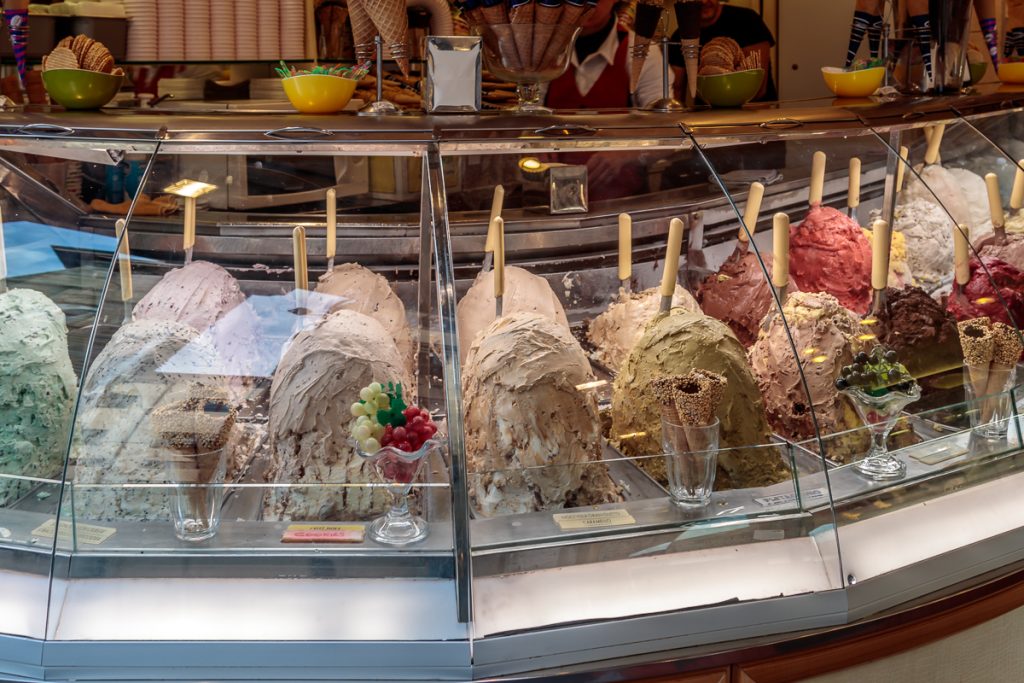 This chocolate fountain, or more accurately a chocolate waterfall, was 3 or 4 feet high by 6 or 8 feet long.  Venchi chocolate has been around since 1878.  They also have stores in Chicago and New York if you need to get a quick fix.  Click to watch video.

And on that sweet note, we will say farewell to Florence, for now.

This entry was posted in Travel and tagged Florence, Italy, Santa Croce.