The Battistero di San Giovanni (The Baptistery of St. John) is another masterpiece in marble. 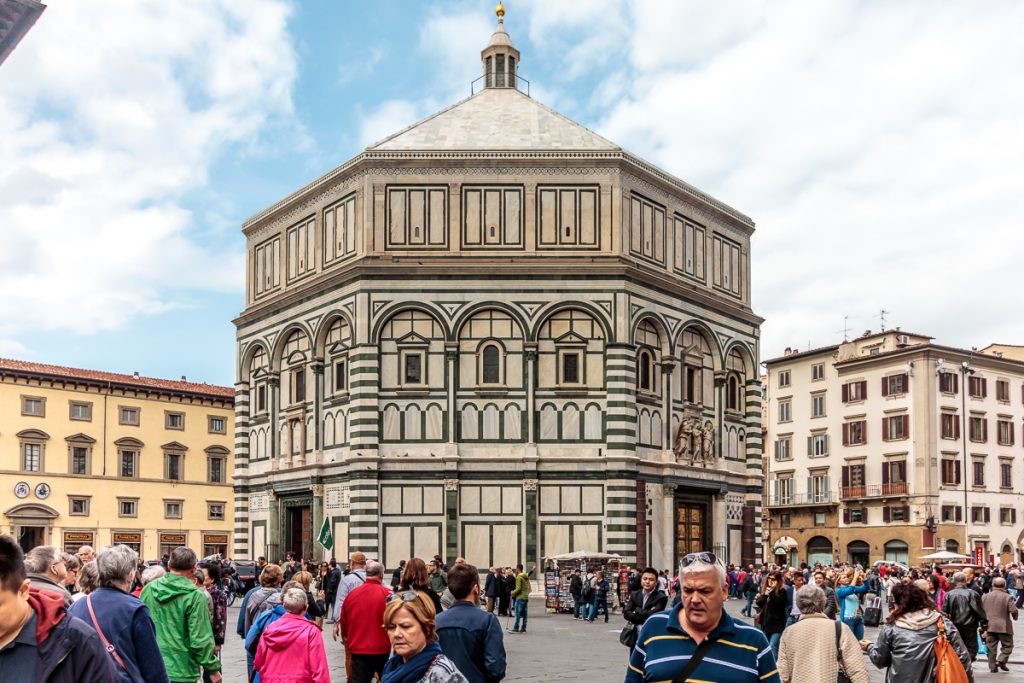 “In the early centuries of the Church, baptisteries were often buildings separate from the main body of the church,  Those who were not yet baptized were not yet considered “citizens” of the Church, and as such received their Baptisms outside the Church, then processed into the church building in triumph.”  (Catholic Church Architecture and the Spirt of the Litergy, Denis McNamara, Hillenbrand Books, Chicago, 2009.)

The baptistery is located in the Piazza del Duomo, right in front of the Cathedral of Santa Maria del Firoe.  Its origins are unknown although it is believed that it was built over the ruins of a Roman temple dedicated to Mars dating back to the 4th-5th century A.D. It was first described in 897 as a minor basilica. In 1128, it was consecrated as the Baptistery of Florence and as such is the oldest religious monument in Florence.  The Baptistery was built with eight sides and three doors; doors on the east, north, and south. 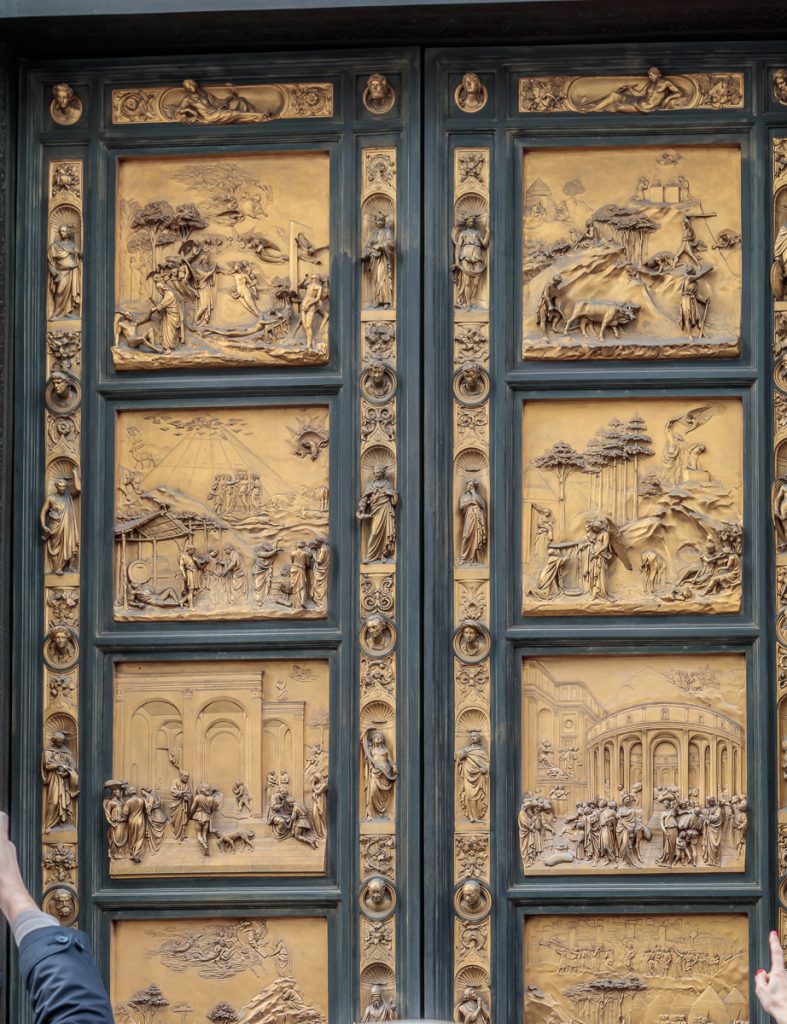 The Eastern doors (Ghiberti) are comprised of 10 panels, each about 31 inches square, and were so beautiful that Michelangelo exclaimed “They are so beautiful that they would be perfect for the gates of paradise.” These doors are still referred to as the Gates of Paradise.  Each panel is shown below.

Genesis: Depicts the creation of Adam and Eve with the Temptation in the background 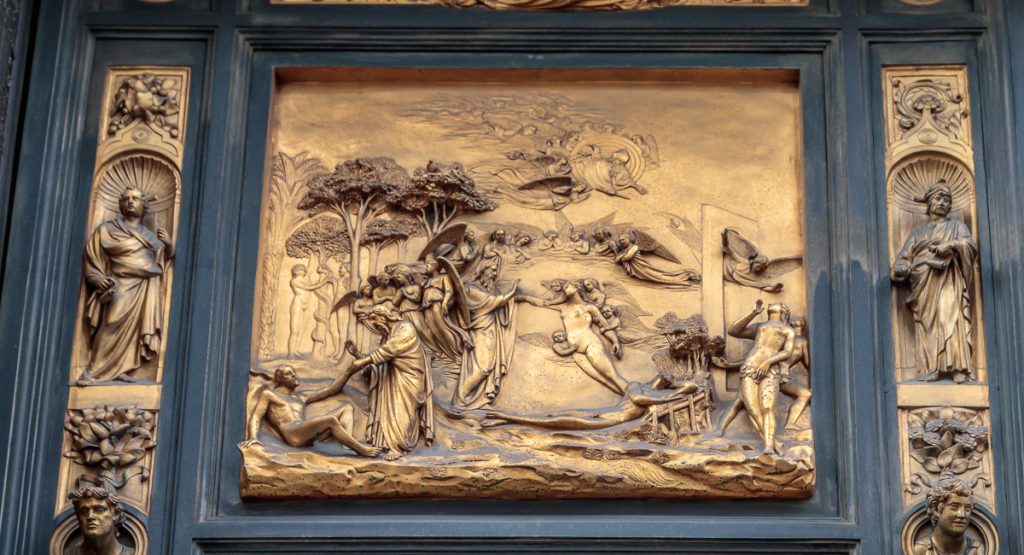 Noah: Animals are seen leaving the Ark. In the foreground are Noah’s shame (his drunkenness) and on the right his sacrifice. 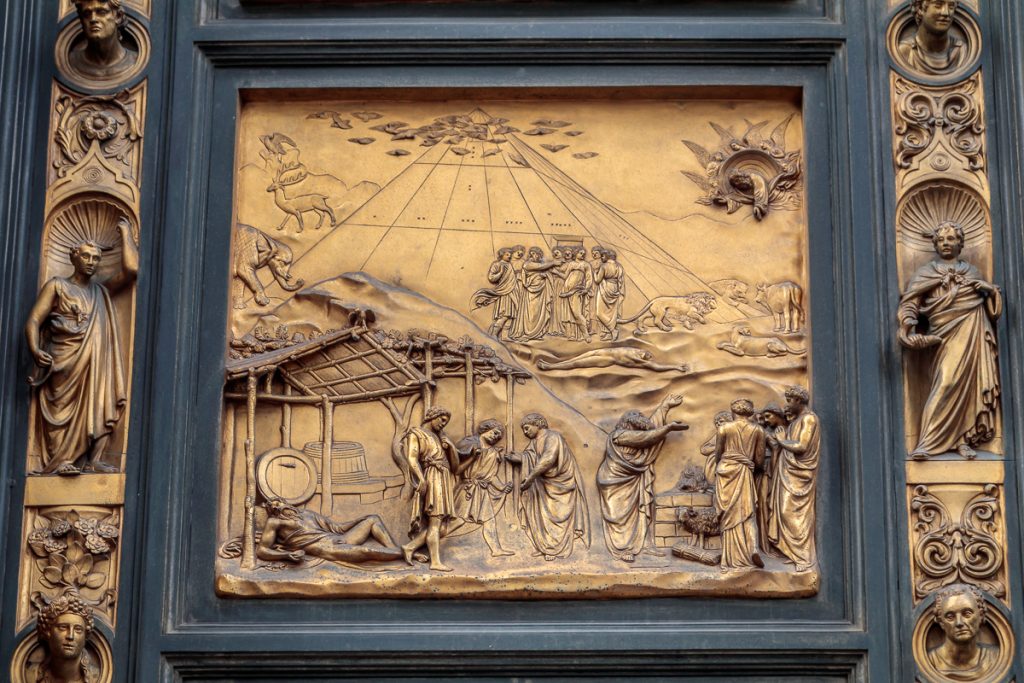 Isaac:  In the foreground are the women attending the birth of Jacob and Esau, with Rebecca in labor in the middle ground. Also in the foreground are Isaac sending Esau on the hunt and on the right Jacob receiving Isaac’s blessing, with a beautiful classical Rebecca, the conspirator, standing nearby. In the background Esau is seen in low relief hunting and on the roof Rebecca is hearing God’s warning about the eventual conflict between her two unborn sons. 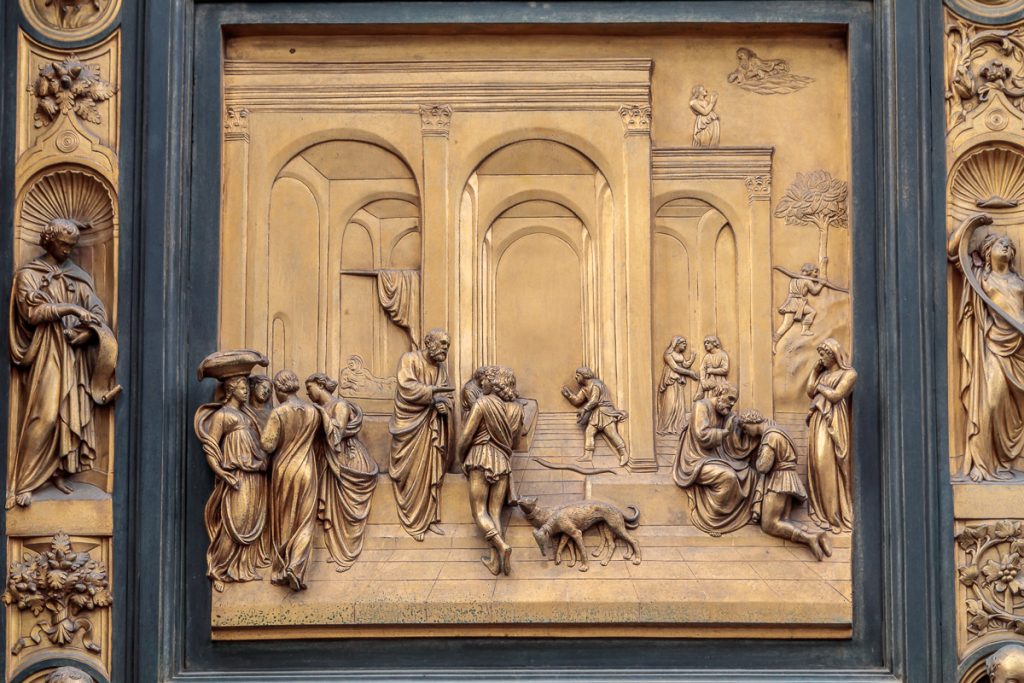 Moses: Daughters of Israel; Receiving the Law – Somehow, I missed this panel and don’t have a photo.  Look at http://www.bluffton.edu/homepages/facstaff/sullivanm/italy/florence/ghibertiparadise/0116moses.jpg to see another image of this panel.

David is in the process of severing the head of Goliath with his own large sword. 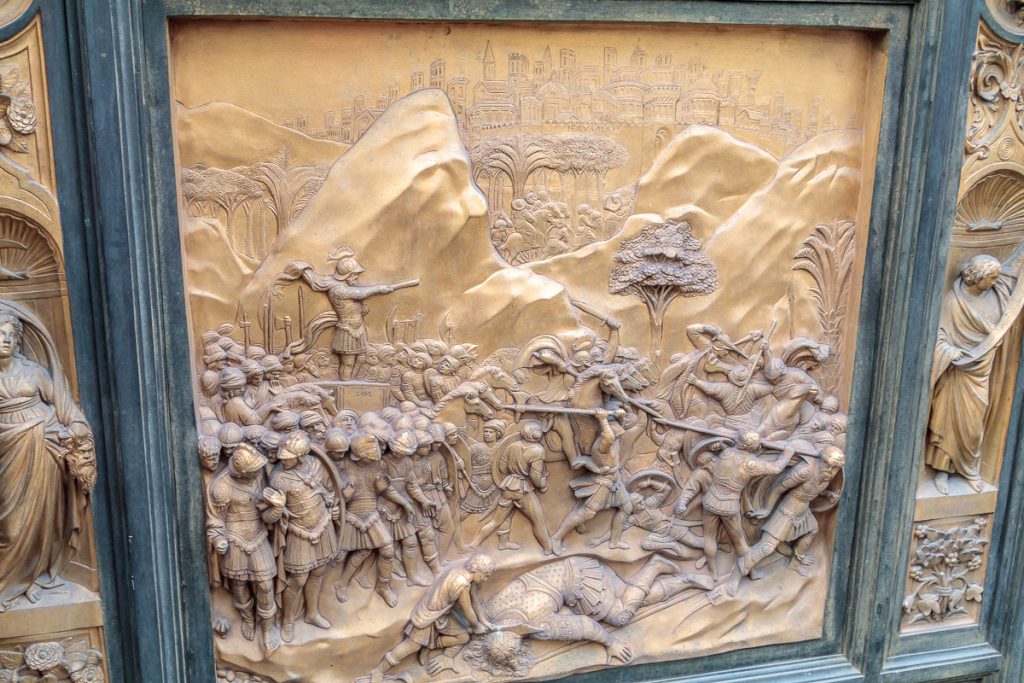 Cain and Abel:  In the distance the brothers offer their sacrifices and somewhat nearer, Cain slays Abel. In the middle ground Abel is seen with his dog watching his flocks. In the foreground Cain ploughs and on the right receives God’s curse. 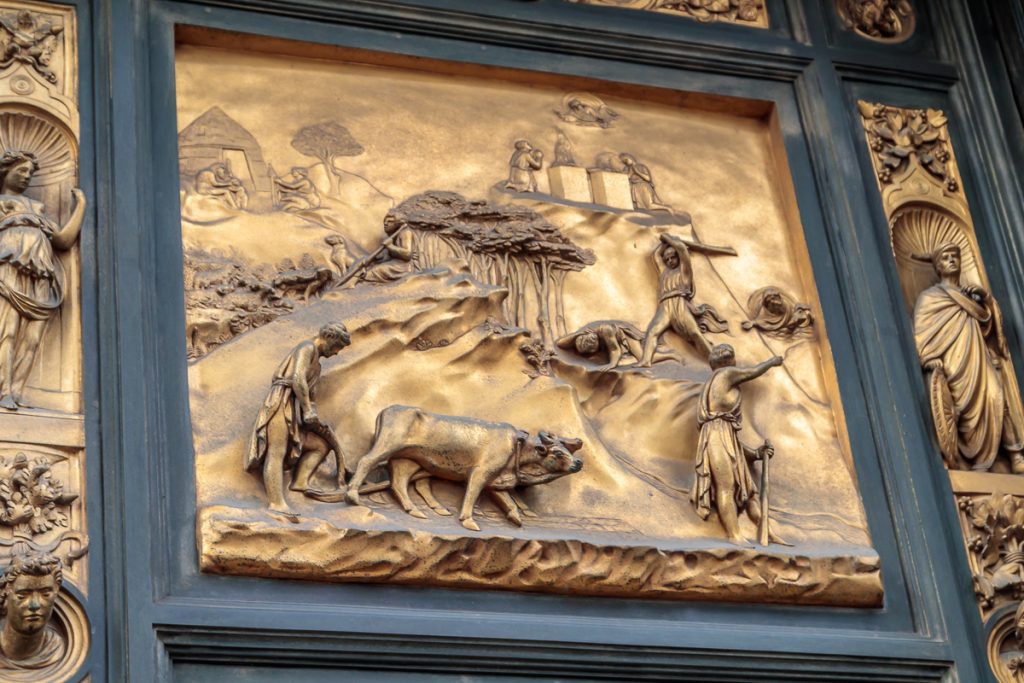 Abraham: Angels announcing that Sarah will bear a son; the Sacrifice of Isaac 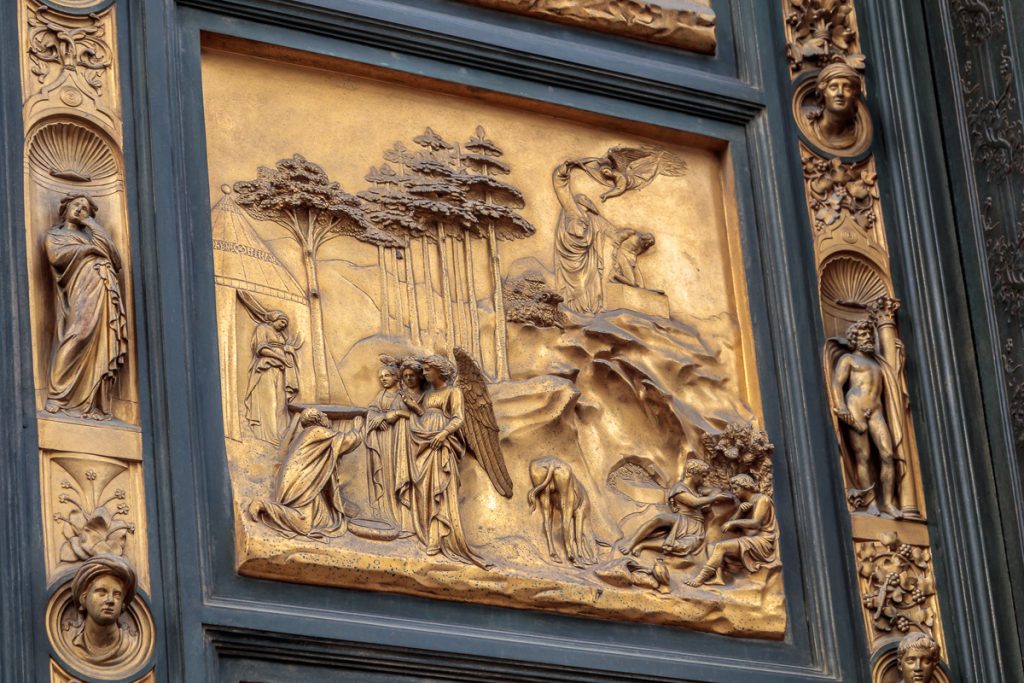 Joseph: sold into slavery in Egypt 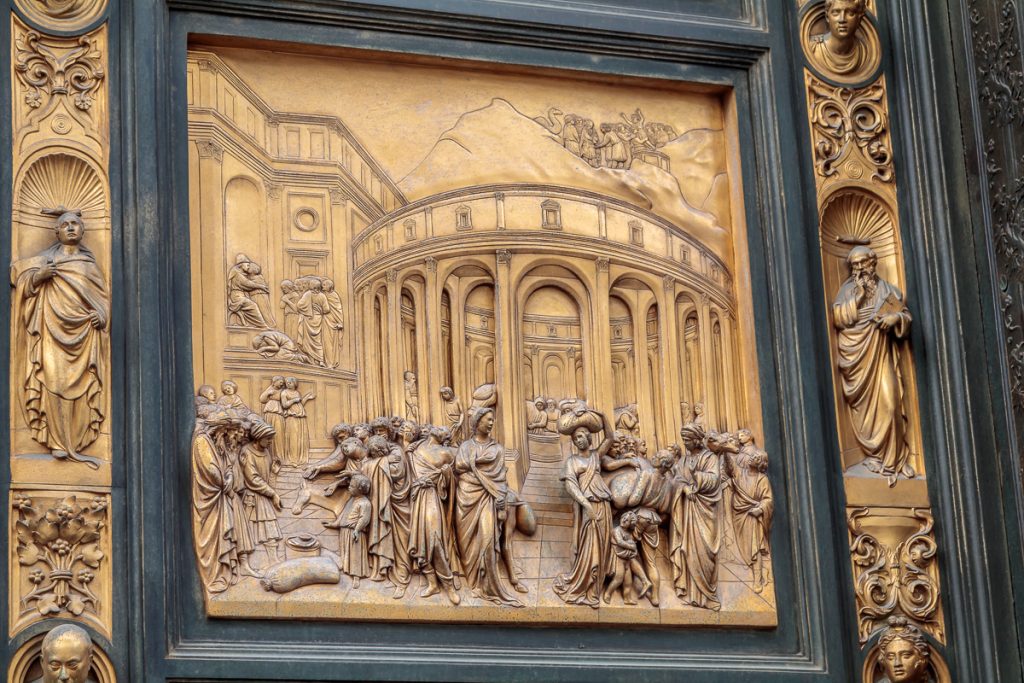 Joshua: Joshua on chariot preceded by the ark of the covenant; the Carrying of the Stones; the background with the city of Jericho and the priests with trumpets 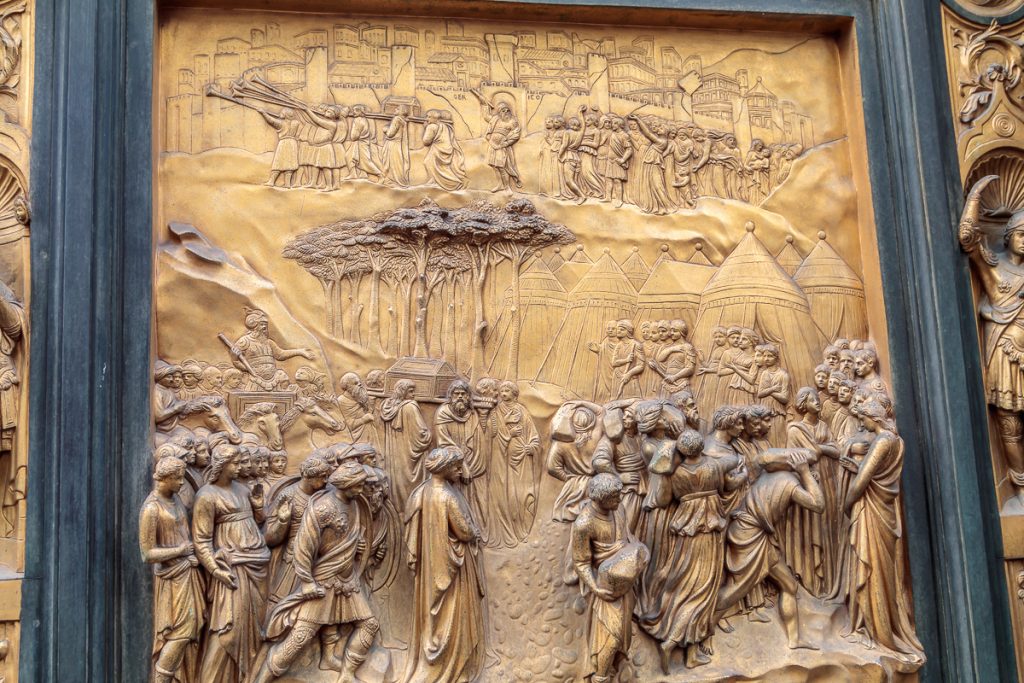 Solomon: Solomon and Queen of Sheba 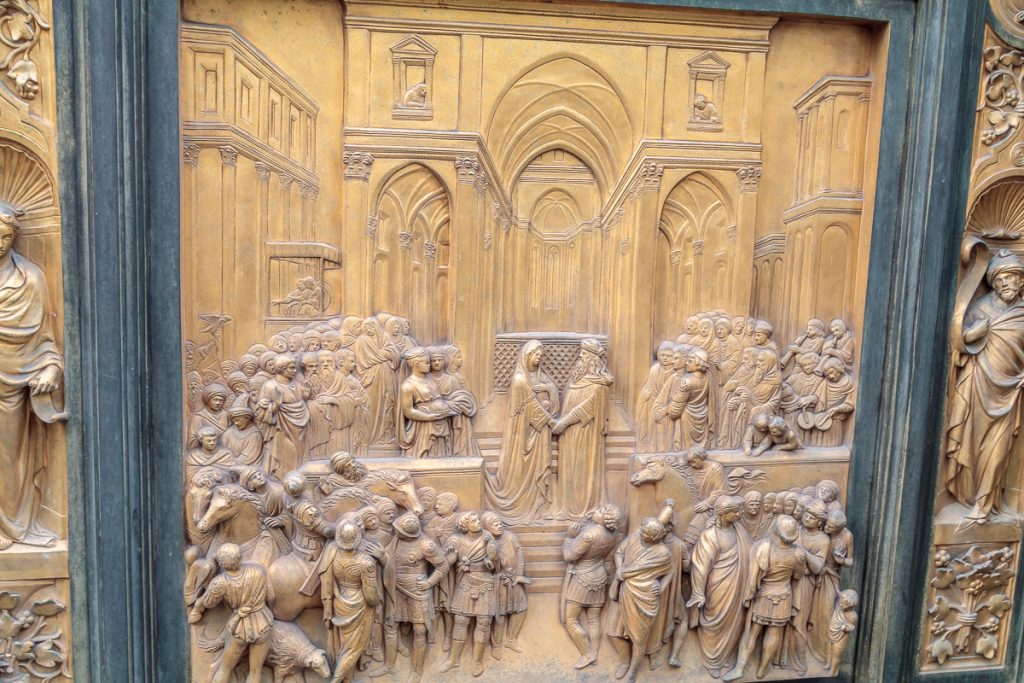 For reasons of safe keeping, the panels seen on the baptistery are not the originals, but copies.  The originals have been moved to the Duomo Museum and can be seen behind glass.

More beauty from Florence to come.

This entry was posted in Travel and tagged Baptistery, Florence, Italy.