The Vatican Museums originated as a group of sculptures collected by Pope Julius II (1503-1513). The popes were among the first sovereigns who opened the art collections of their palaces to the public thus promoting knowledge of art history and culture. As seen today, the Vatican Museums are a complex of different pontifical museums and galleries that began under the patronage of the popes Clement XIV (1769-1774) and Pius VI (1775-1799). In fact, the Pio-Clementine Museum was named after these two popes, who set up this first major curatorial section. Later, Pius VII (1800-1823) considerably expanded the collections of Classical Antiquities. 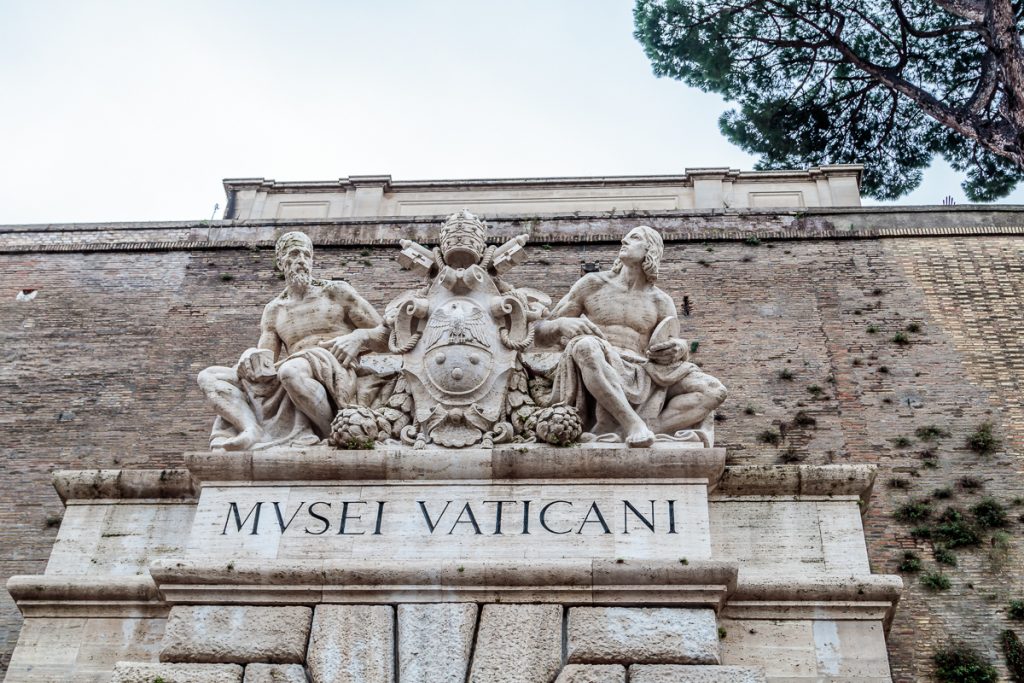 Once in the entry, this sculpture greets you. 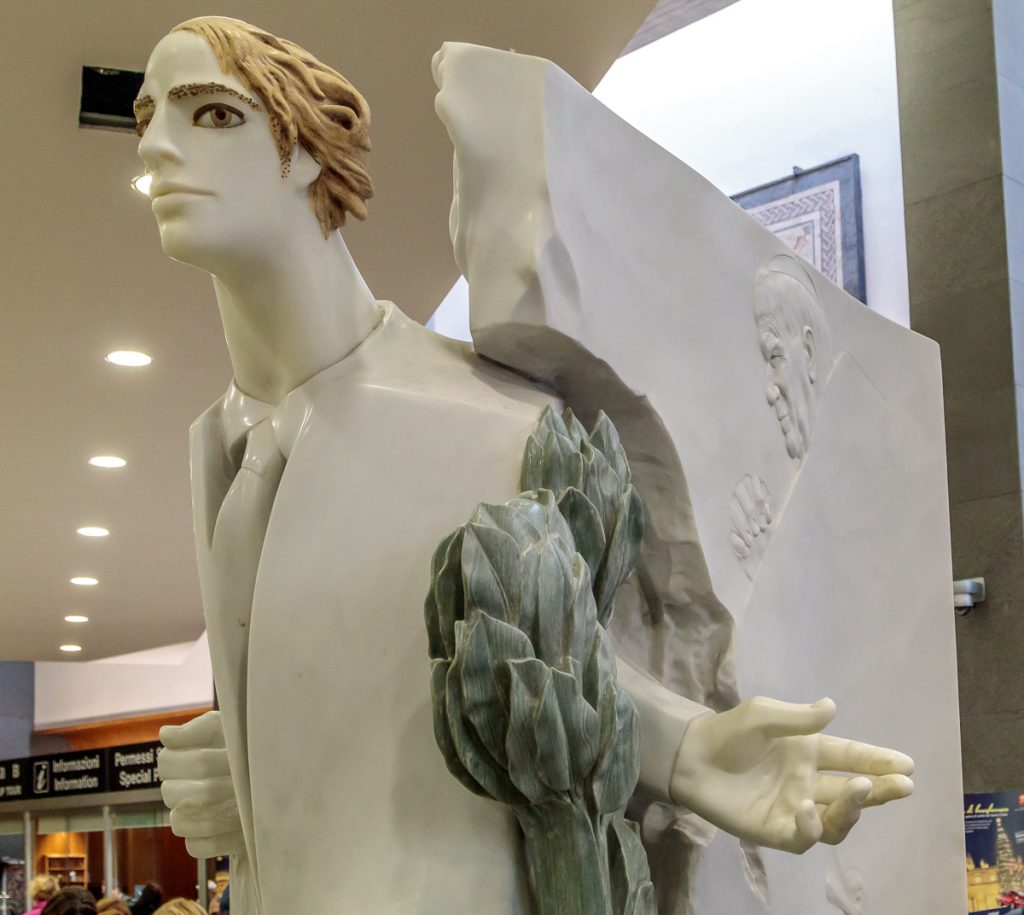 There is a small courtyard at the top of the stairs at the museum entry with a great view of Saint Peter’s Basilica and the Vatican gardens. 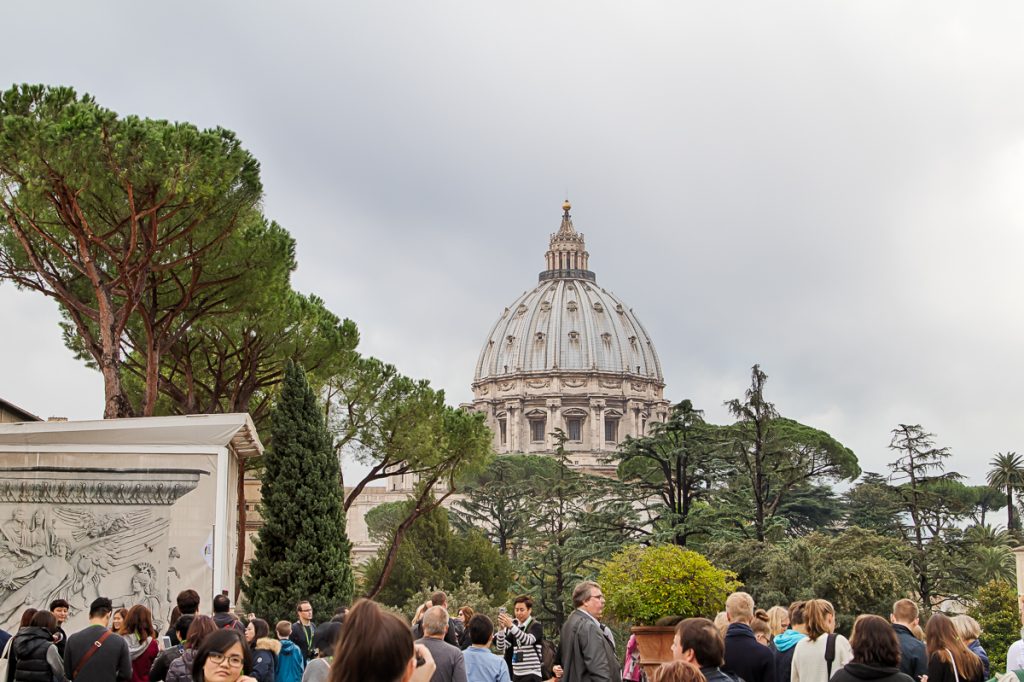 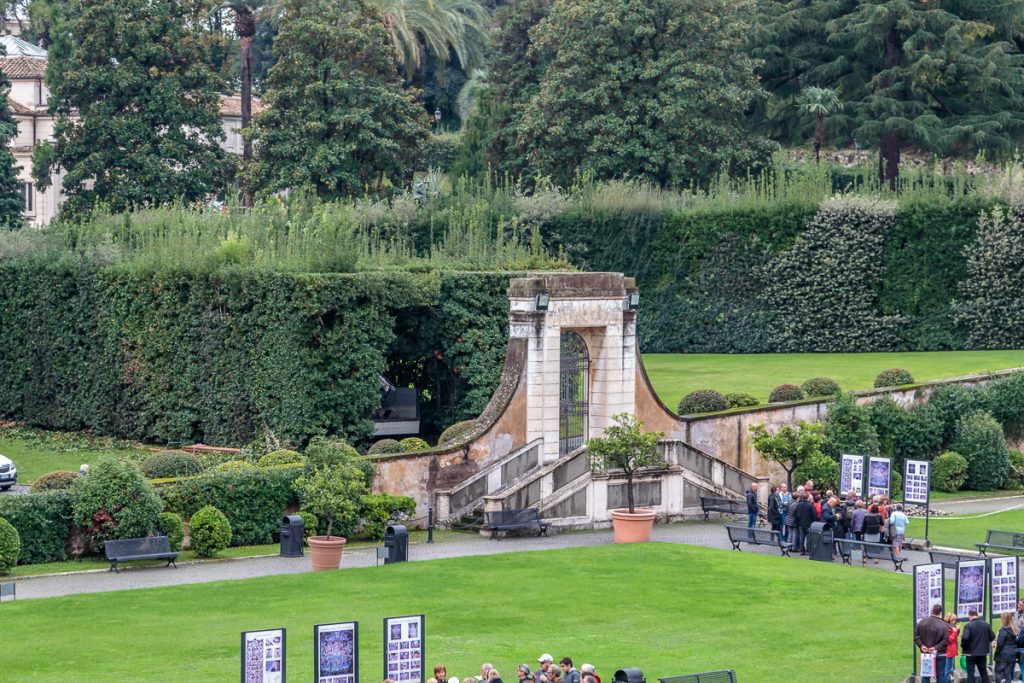 Also, a view of the museum building. 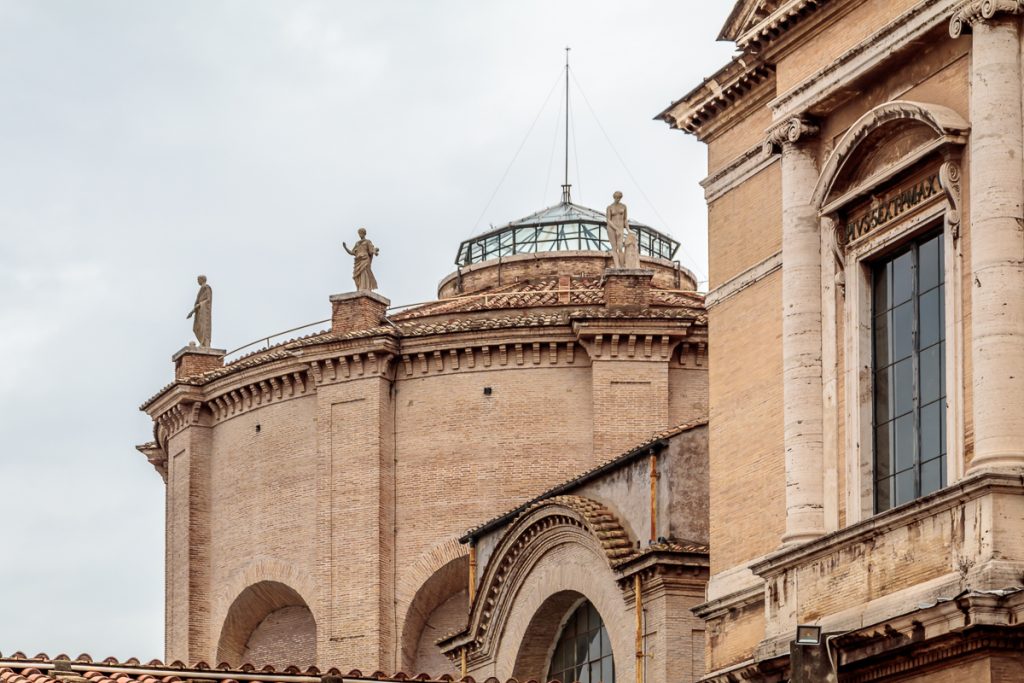 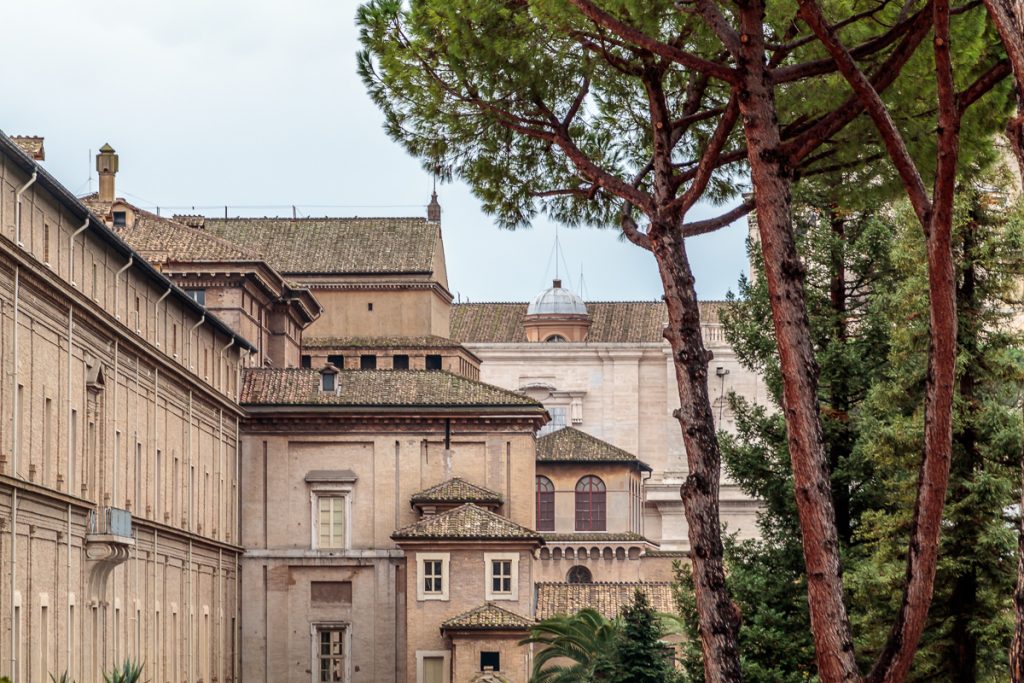 Next stop is the Cortile della Pigna, the Pinecone Courtyard.  The pinecone dates back to the 2nd century AD and was used as a water fountain.   The two peacocks on the sides came from Hadrian’s villa in Tivoli and also date to the 2nd century.  Peacocks always represent immortality because it was believed that the flesh of the peacock did not rot after death. 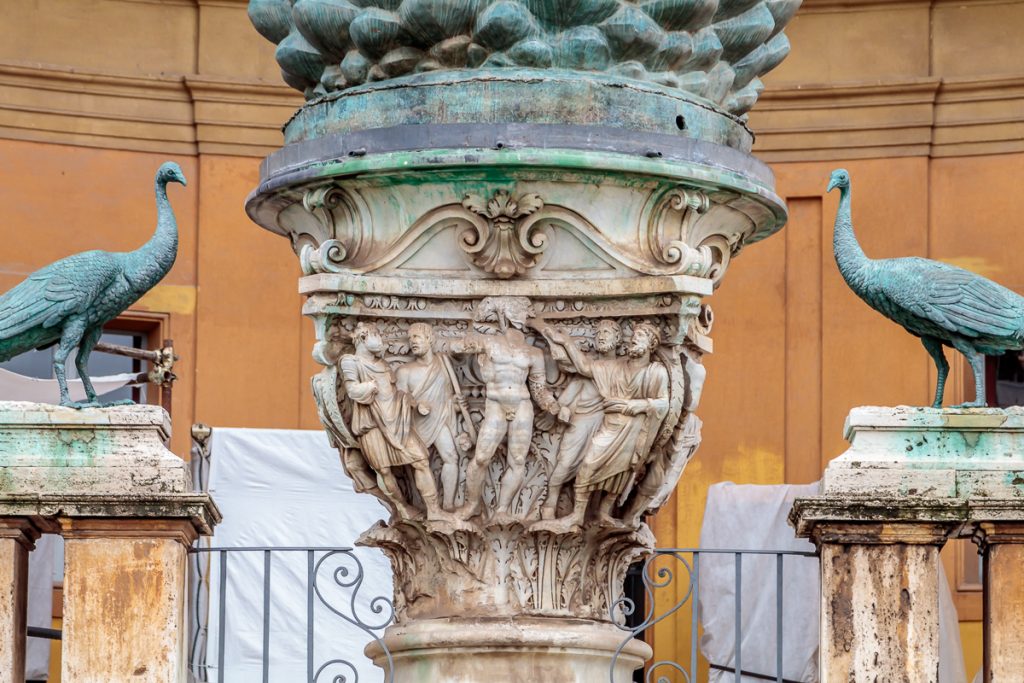 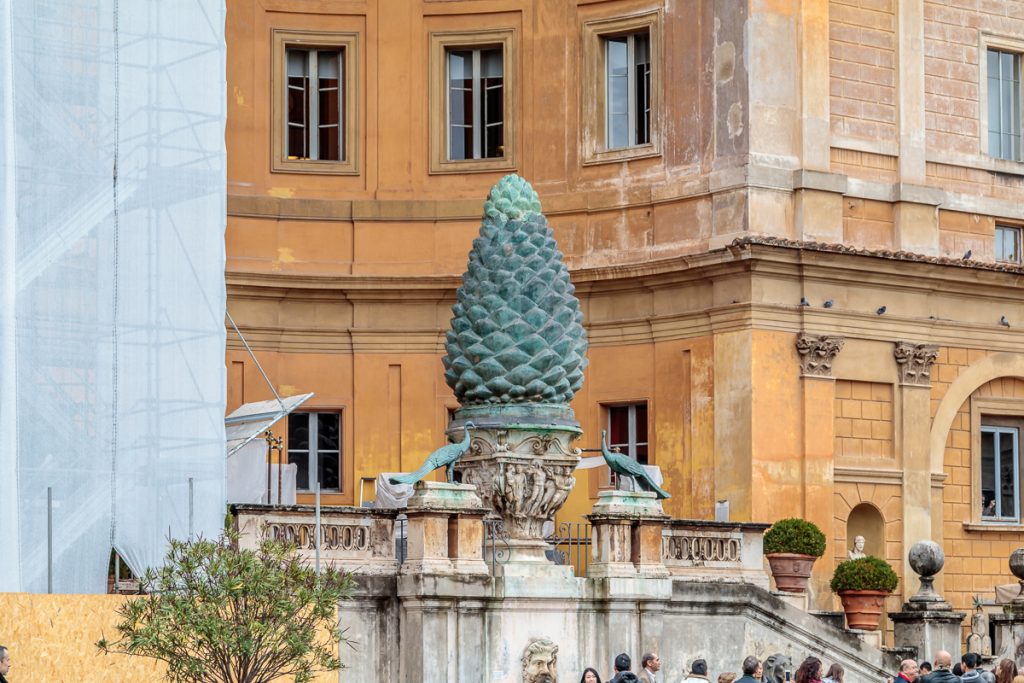 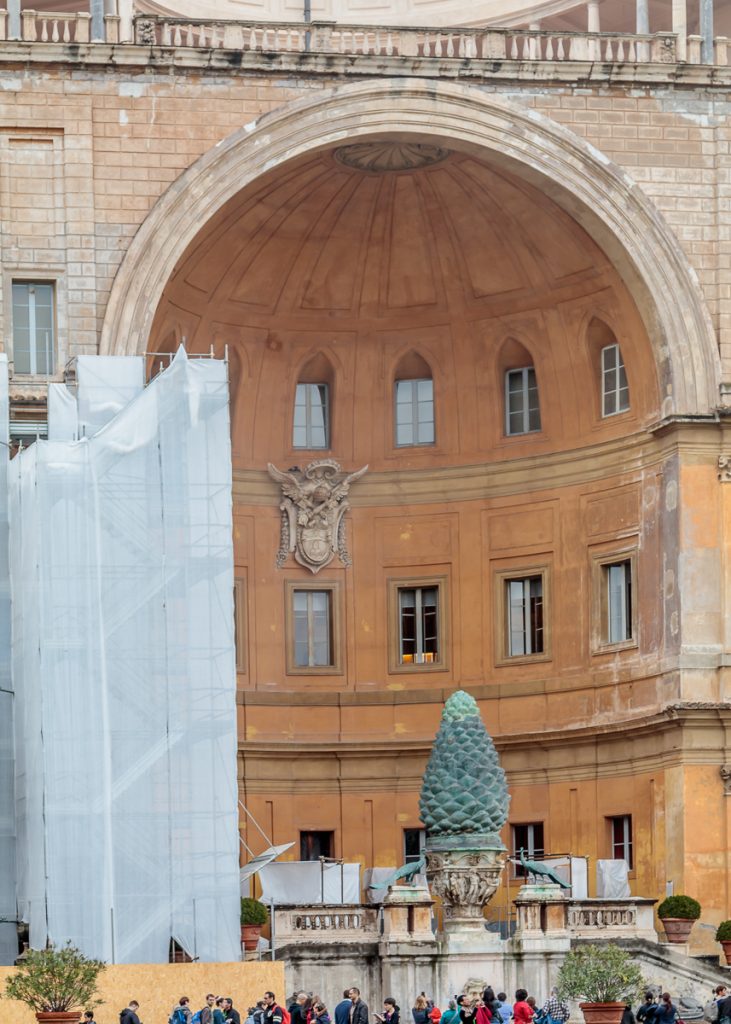 Other scenes in the courtyard. 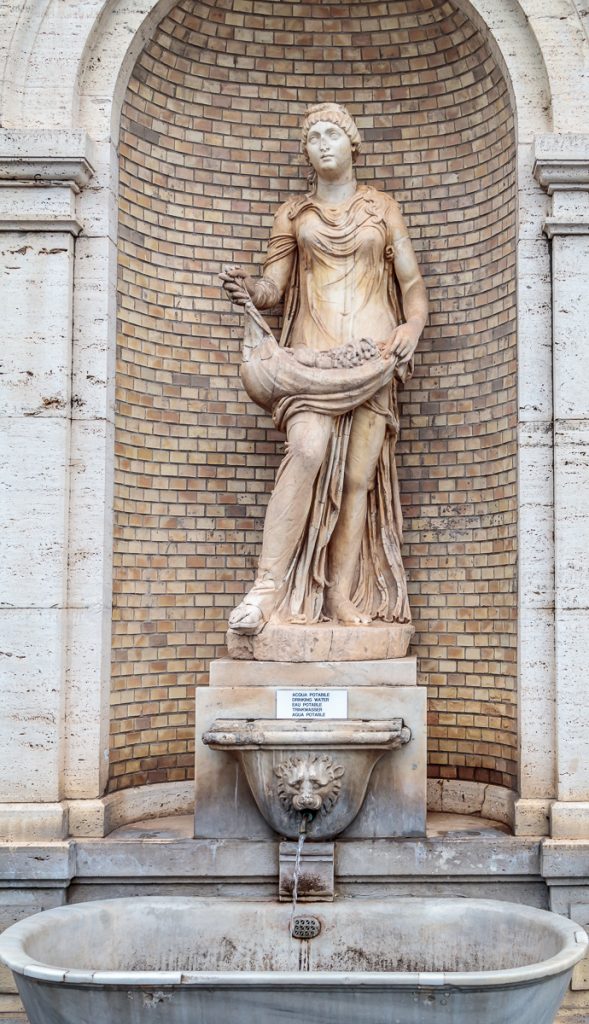 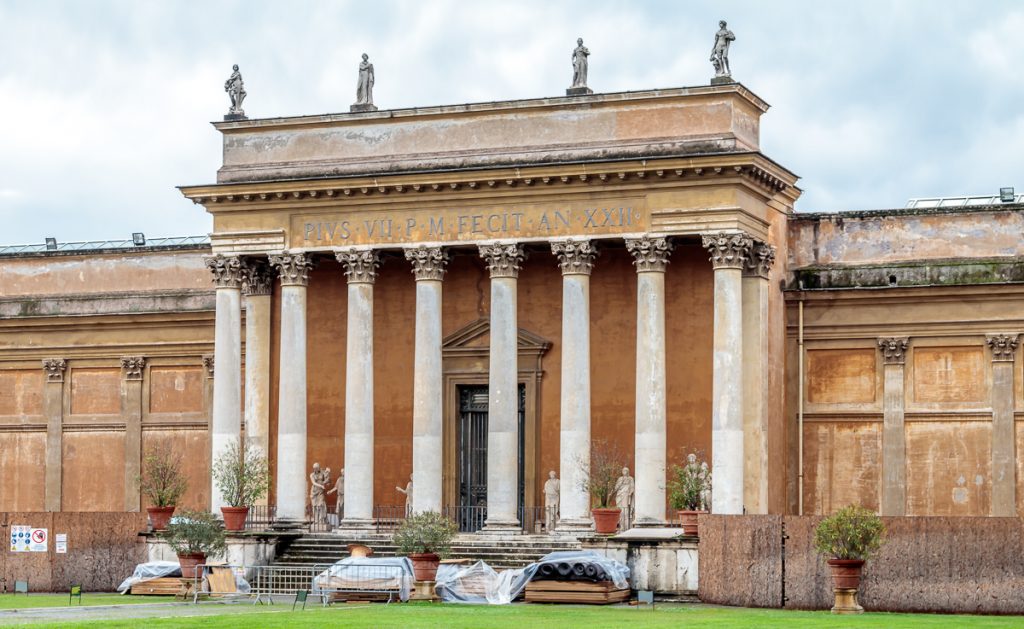 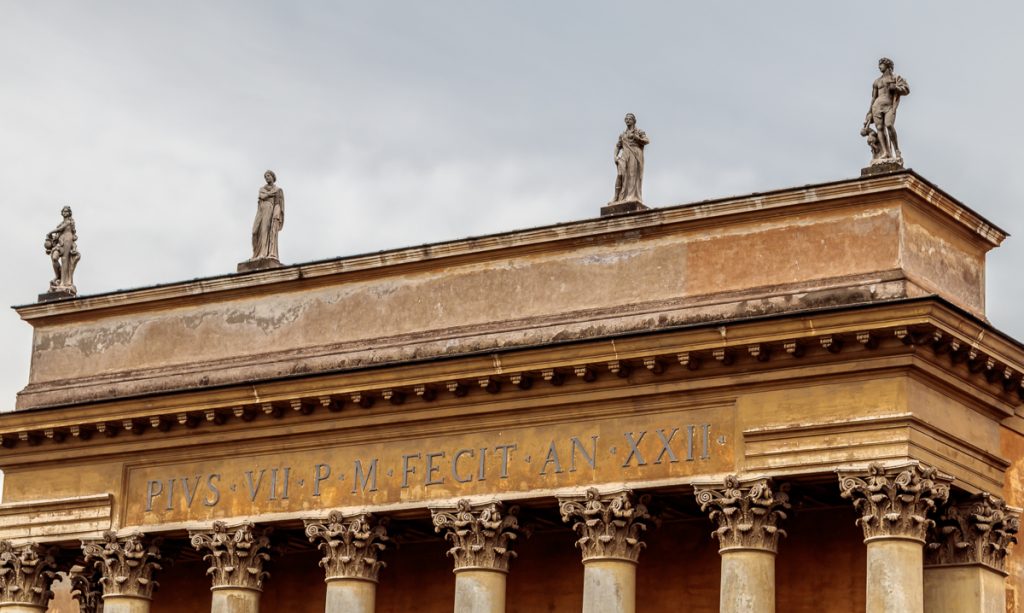 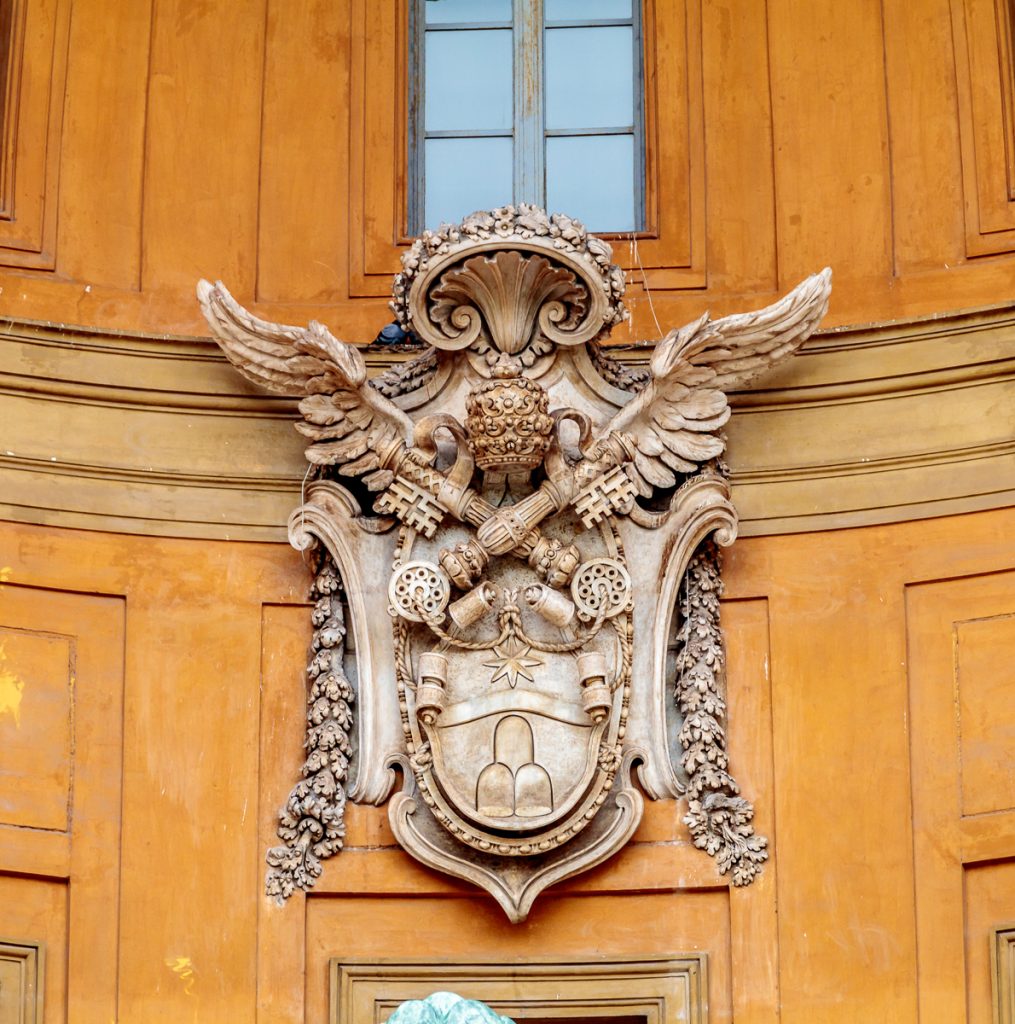 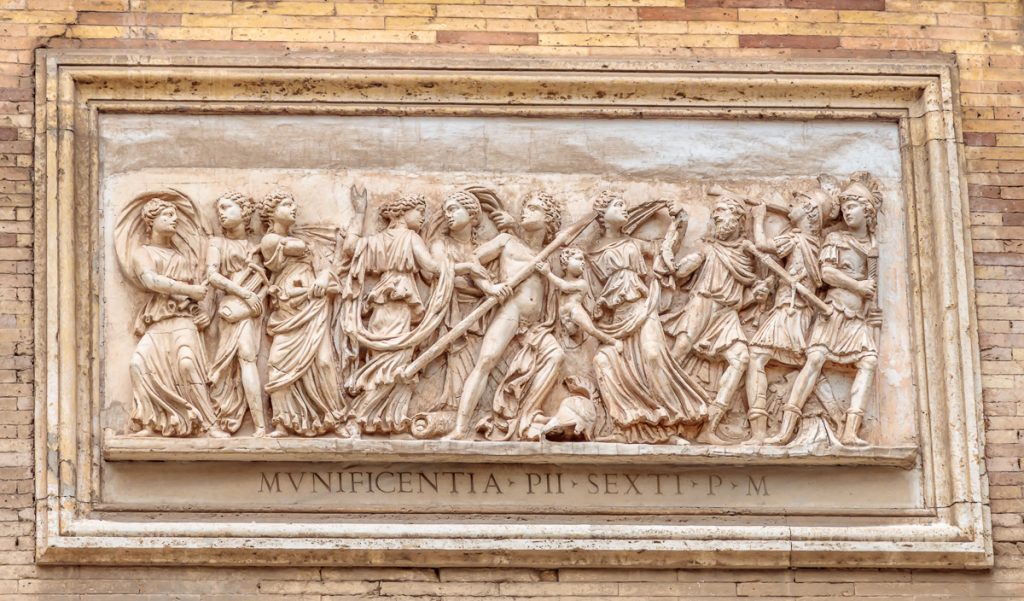 The Lacoon Group (shown below) dates back to the 1st century AD, but the original Greek bronze dated back to 2 BC.  It is carved from a single block of marble by three artists from Rhodes.

This represents a Trojan priest.  In the story of the Trojan horse, the horse was delivered to the gates of Troy.  The Trojans did not know what to do with this horse, so they debated. One priest had a premonition and warned the Trojans not to take in the horse. But then snakes came from the sea and devoured the priest and his sons. The Trojans thought this meant the gods wanted them to take in the horse. They did take the horse, and you know the rest of that story. 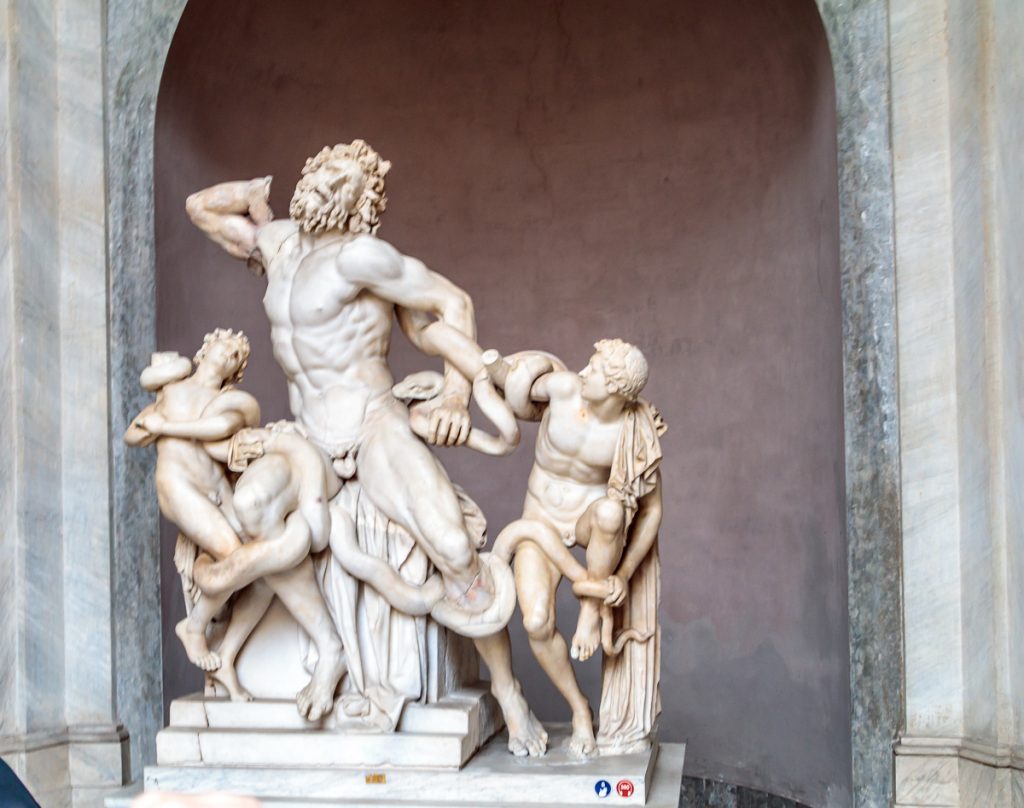 The Round Room contains Nero’s bathtub. 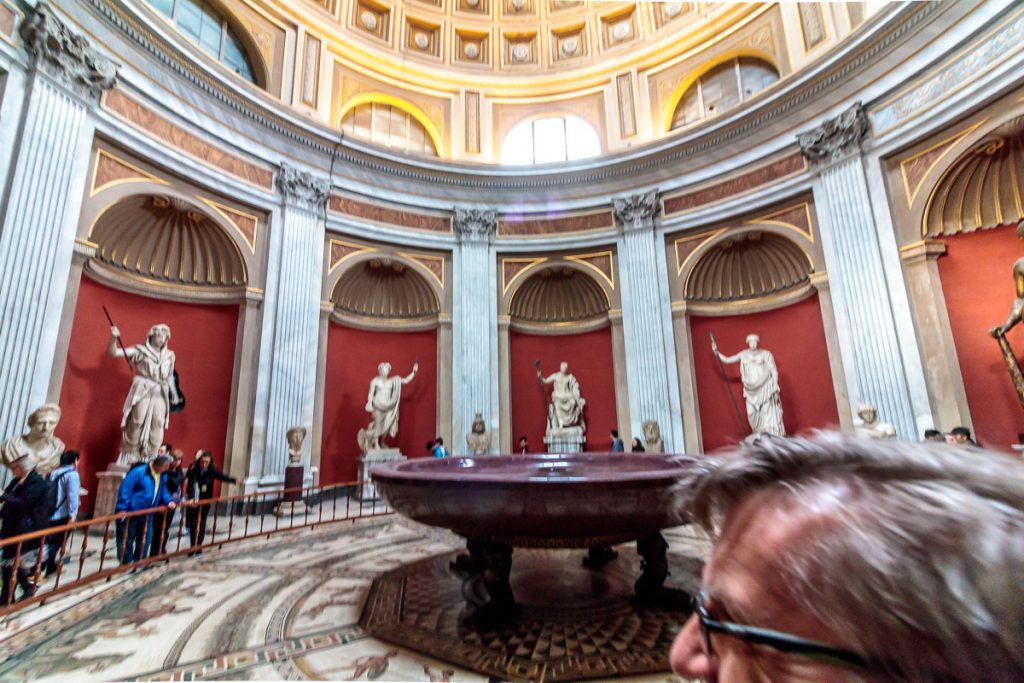 The dome above was designed by Michelangelo and is meant to mimic the dome of the Pantheon. 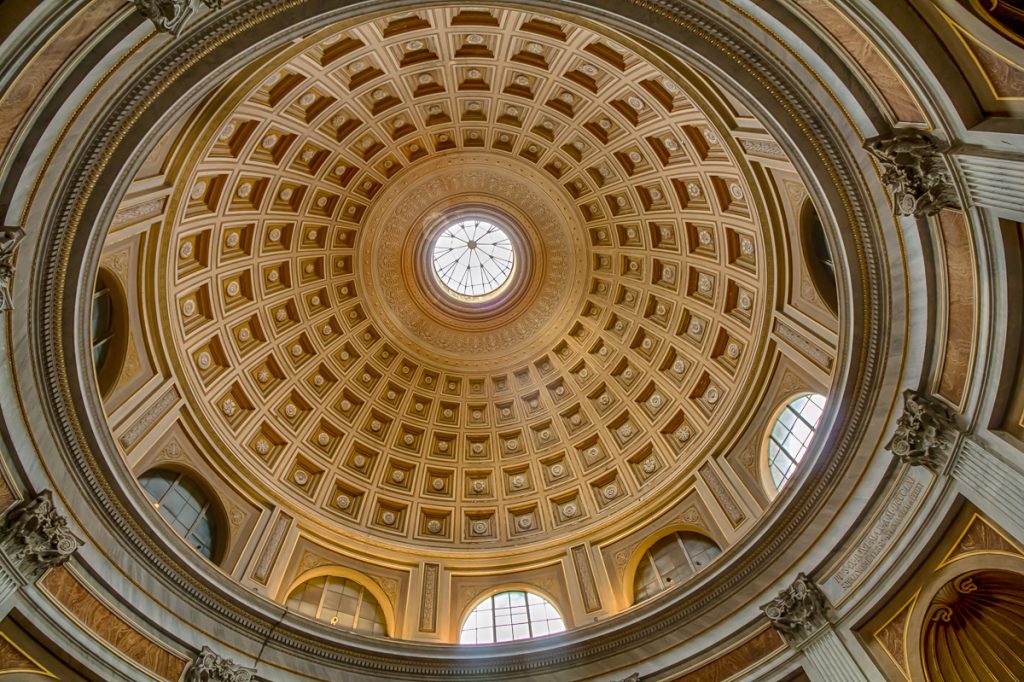 Dome of Round Room

The mosaic floors date back to the 2nd century BC and depicts the battle of the Centaurs. They came from bathhouses in Ostia, the old port of Rome and were brought here piece by piece. 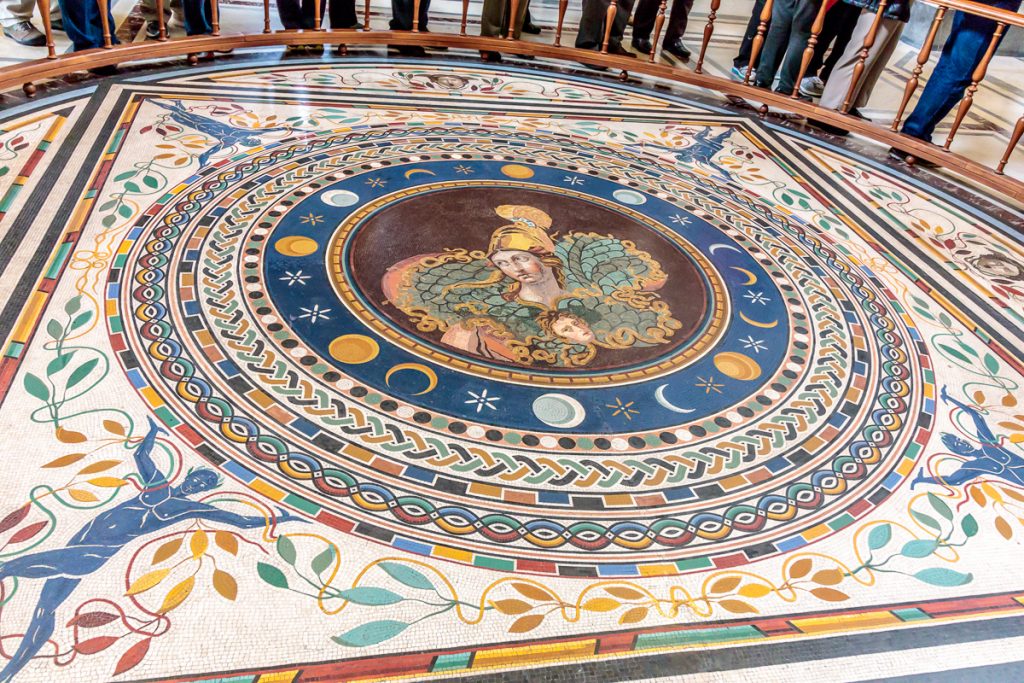 Mosaic Floor of Round Room

There are many other sculptures in this museum, far too many to see in a single visit, much less to describe.  Here are some examples. 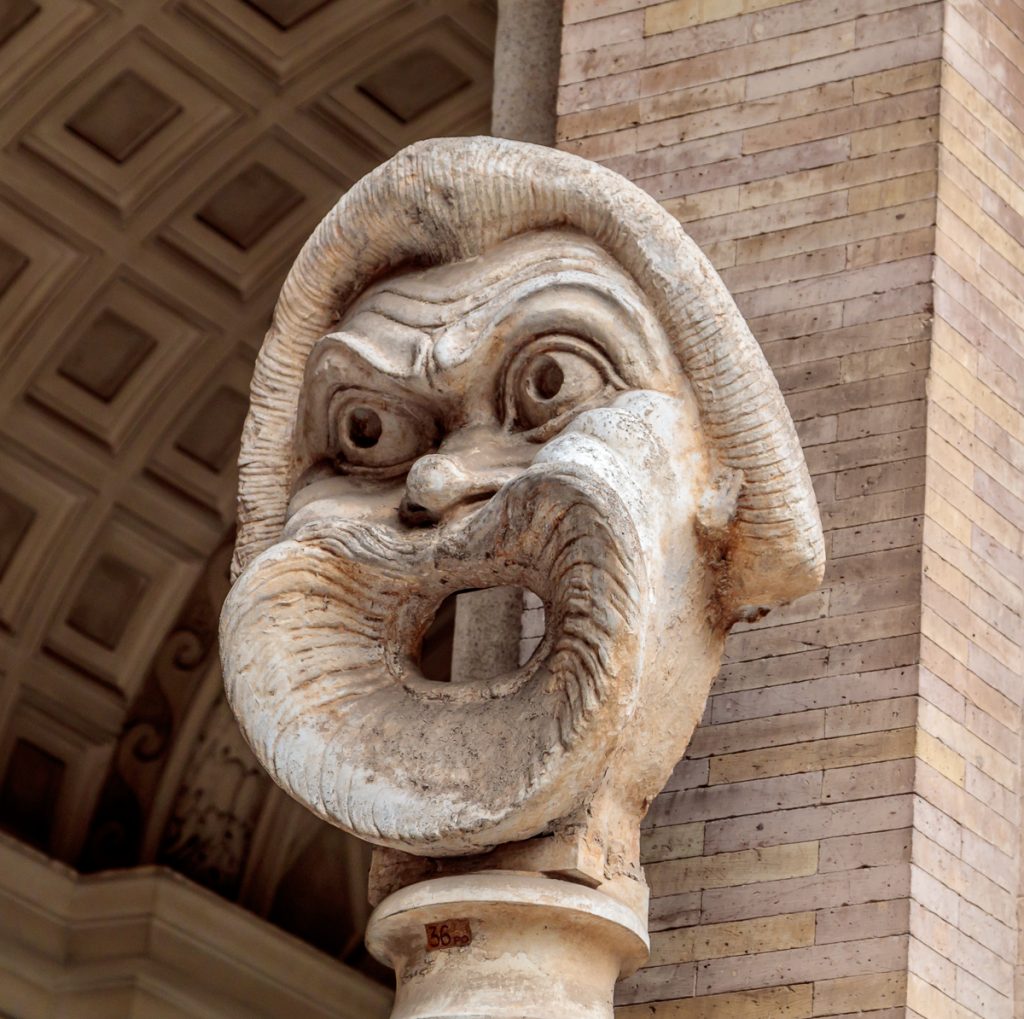 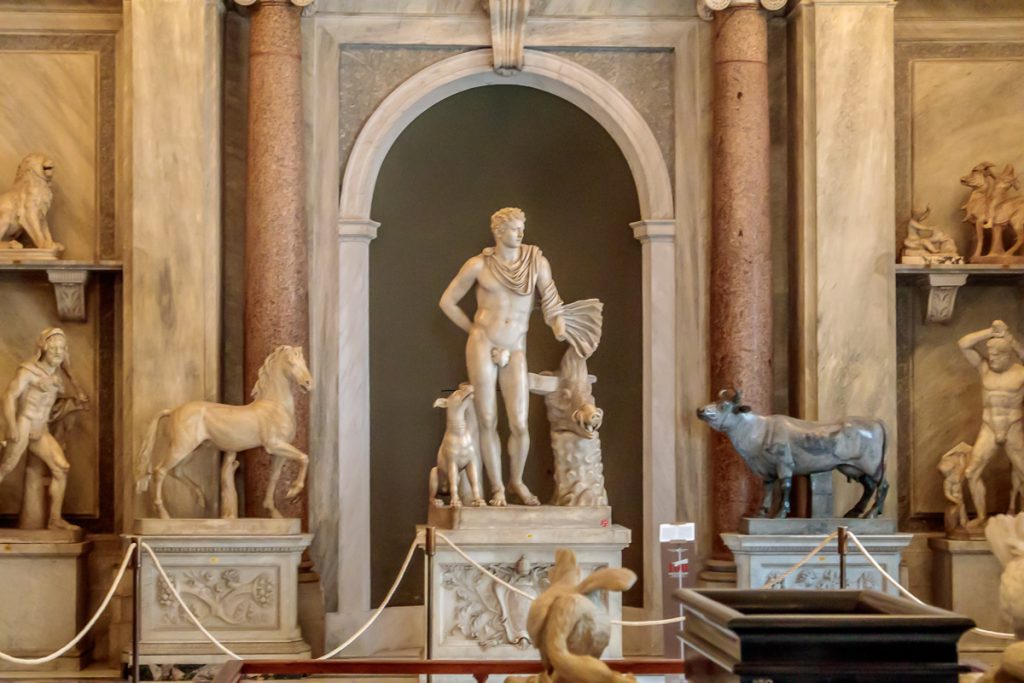 Apollo has been recognized as a god of music, truth and prophecy, healing, the sun and light, plague, poetry, and more. (WikiPedia) 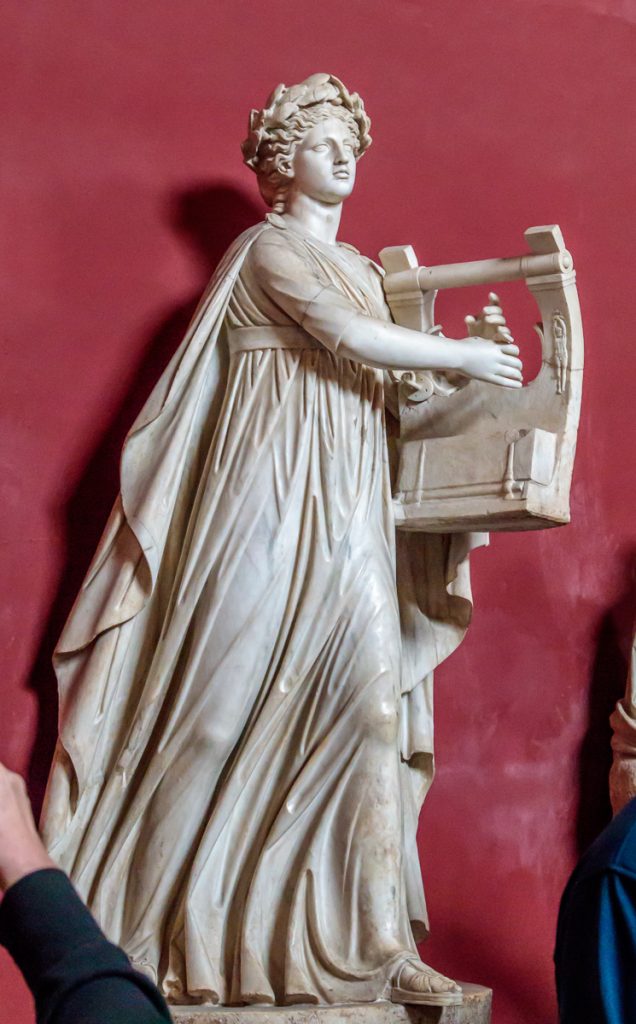 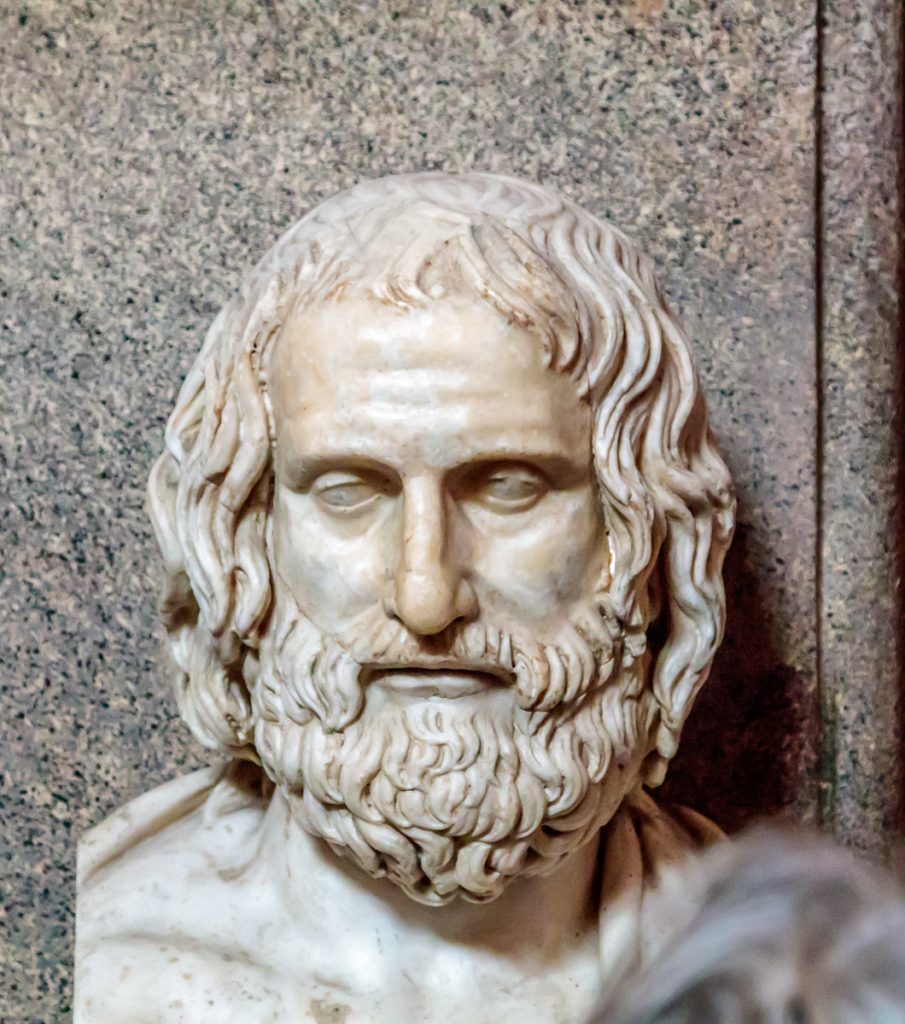 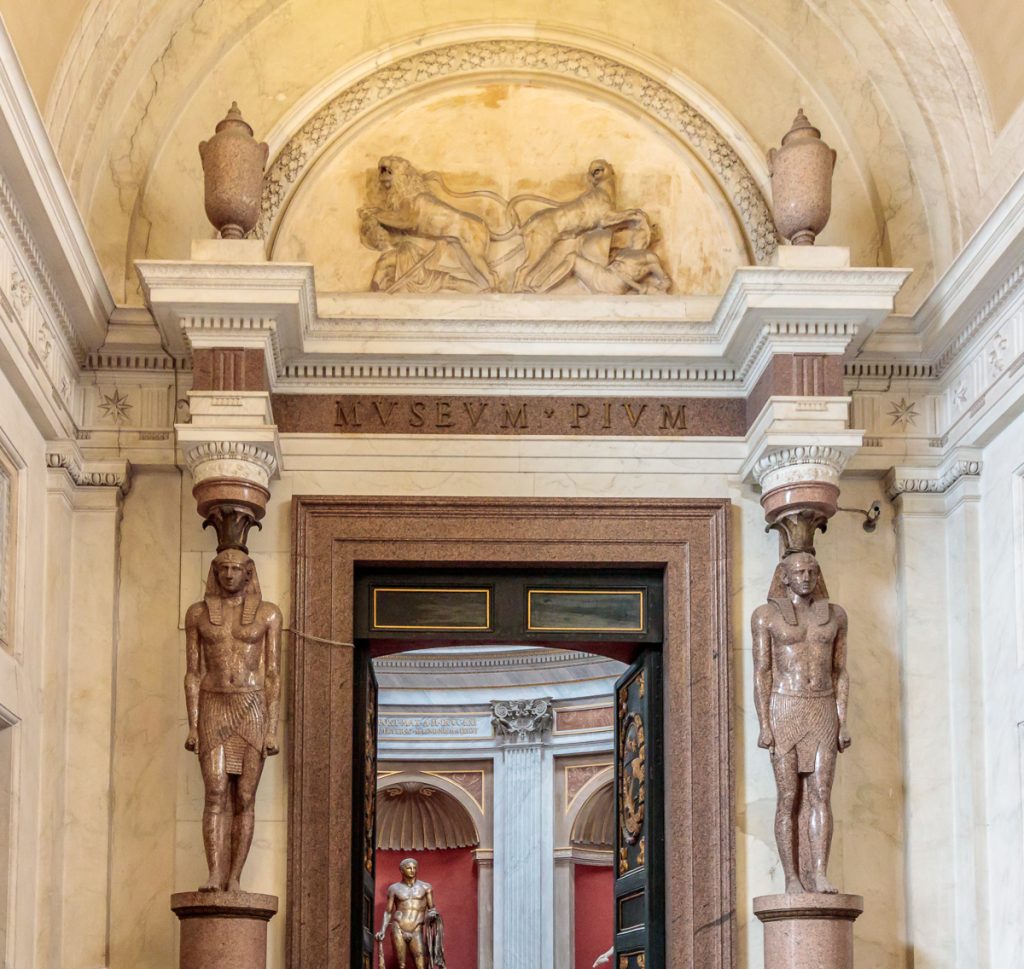 And, the last stop for today, the entrance to the Sistine Chapel.  Note that the sign indicates that photography is not allowed.  Even if it were allowed, I could not do it justice.  There are many web sites that have images for viewing.  I encourage you to search for these images and look at the beauty of this chapel. 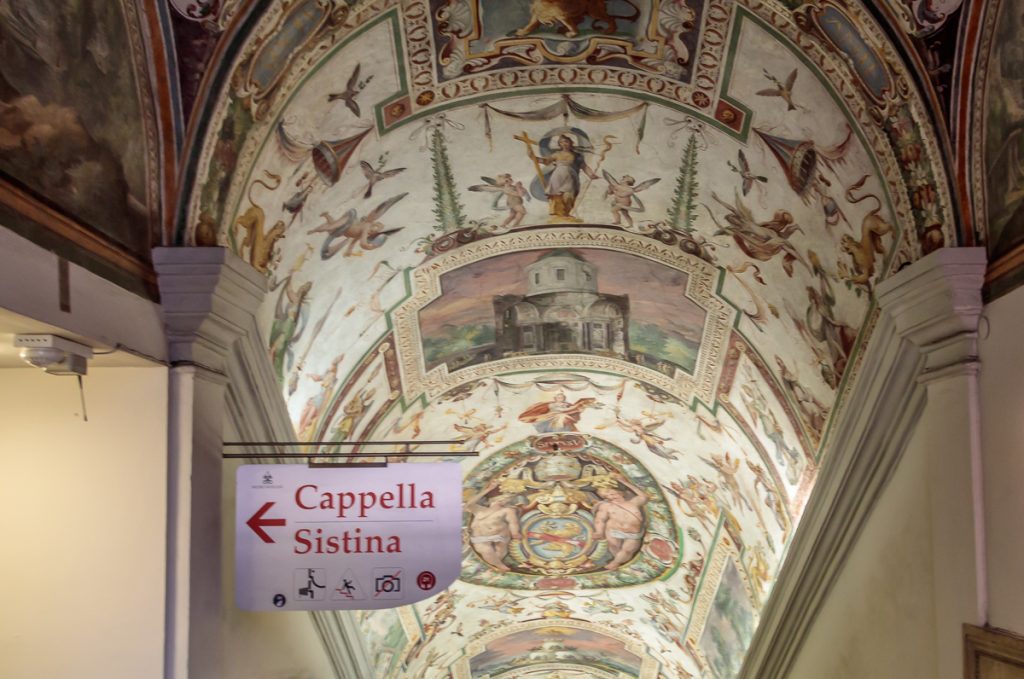 The chapel was cleaned back in the late 20th century.  After the soot and grime was removed, multiple figures that had been hidden for centuries were discovered.  There are two small patches that were not cleaned to that viewers could see the huge difference between the before and after cleaning.  I cannot imagine seeing this beautiful room before it was cleaned.

Next time, I will look at the museum from a somewhat unique vantage point, looking at the ceilings.

This entry was posted in Travel and tagged Italy, Museum, Rome, Vatican City.